Accessibility links
The Public Respects Civility, But Rewards Rudeness The flap involving Arizona Gov. Jan Brewer and President Obama is the latest example of politicians behaving badly. Behavior that would have been seen as inappropriate in earlier eras now is viewed as principled confrontation. 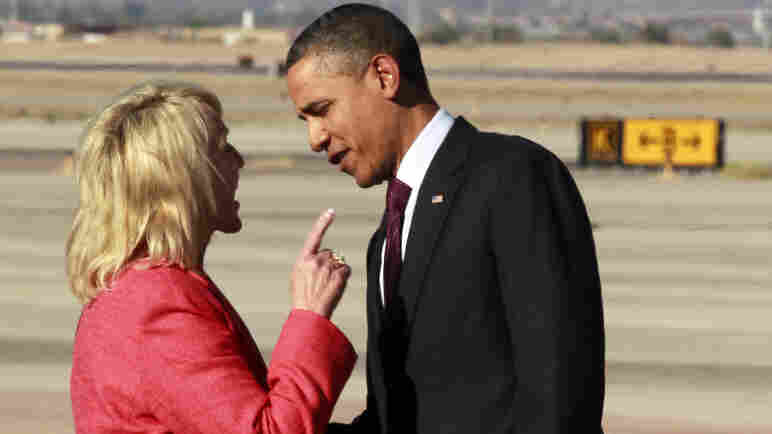 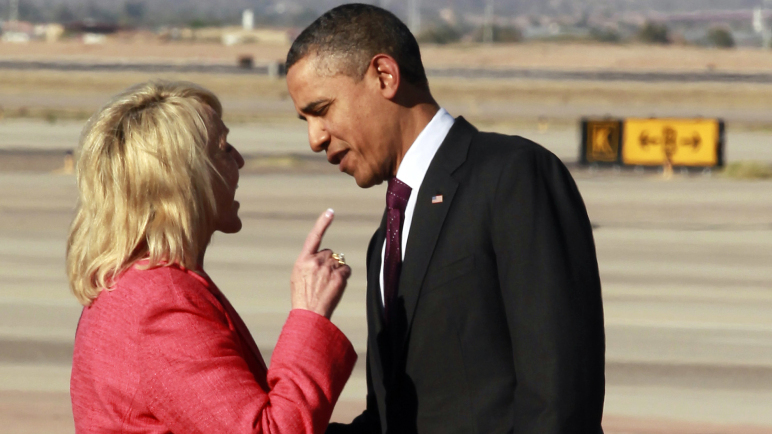 When it comes to those who hold high office, we're often told, you should respect the office if not the man. But sometimes that's hard to do, when the man is right there in your face.

That proved to be the case when Arizona Republican Gov. Jan Brewer met President Obama upon his arrival at the Phoenix airport on Wednesday. Their discussion quickly turned into an argument about Brewer's account in her new book about an earlier meeting between the two.

A photo of the governor shaking her finger in the president's face quickly circulated around the Internet.

"My perception at least was that he was a little thin-skinned about what I wrote in the book," Brewer said on KTAR, a Phoenix talk radio station.

Not Usually In Public

When you do show disrespect, when you yell out at the State of the Union or you shake your finger at the president, you get a lot of support. You raise a lot of money and get a lot of plaudits and emails for standing up.

It was an unusual moment. Although politicians are often critical of each other, presidential historians struggle to think of other examples where one openly confronted a president in full view of the cameras.

Brewer's behavior may have been unplanned and represent only an isolated moment, but it also may speak to a larger erosion of social norms, suggests Cassandra Dahnke, co-founder of the Institute for Civility in Politics in Houston, which offers civility training to students and others.

"I grew up hearing that you treat the office with respect, and people aren't buying that anymore," she says.

There may be a combination of factors that have contributed to this change, Dahnke suggests, including the unending airing of grievances on websites and the kind of open hostility that now sometimes gets expressed at congressional town hall meetings — leading to fewer town hall meetings being held.

"With congressional approval ratings so low, people feel like they don't respect the Congress, so they're going to communicate that," Dahnke says.

Former Rep. John Shadegg, an Arizona Republican, says he believes his governor simply stood up for herself in a confrontation of the president's own making. Everyone understands that the tarmac greeting ceremony is not the place to raise contentious issues, says the former congressman, adding that Obama began making bones about Brewer's book.

"If he had a problem to discuss with her and he intended to be critical, he picked an inappropriate, very public time to raise it," Shadegg says. "I believe she was genuinely surprised and shocked and instinctively reacted to defend herself.

Rep. Joe Wilson yelled out "You lie!" during President Obama's address to Congress on health care in September, 2009.

"In my opinion, if someone disrespected the office of the president, I think it was him," Shadegg says.

Like other types of behavior, political rudeness spreads in ways that permeate the culture. People don't know where to draw the lines, so they end up snacking in church, texting during weddings and wagging fingers at a president.

"Much of the politics we have today is strident and polarized and mean," says Lee Hamilton, a former Democratic House member who now runs the Center on Congress at Indiana University. "The fundamental problem, of course, is we do not show respect to those who are involved."

Hamilton points out that while everyone pays lip service to the idea of civility, few will castigate a politician for being impolitic. Instead, the media always show some love for confrontation, while constituents may well reward a politician for taking an aggressive stance against another politician they don't like.

Hamilton cites Rep. Joe Wilson, the South Carolina Republican who was showered with millions in campaign contributions after yelling "You lie!" at Obama during a 2009 address to Congress.

"When you do show disrespect, when you yell out at the State of the Union or you shake your finger at the president, you get a lot of support," Hamilton says. "You raise a lot of money and get a lot of plaudits and emails for standing up."

Not Just Wrong But Evil

Incivility is nothing new in American politics. The classic extreme example came in 1856, when South Carolina Rep. Preston Brooks beat anti-slavery Sen. Charles Sumner of Massachusetts with a cane on the Senate floor.

Things may not get so out of hand these days, says George C. Edwards III, a scholar on the presidency at Texas A&M University. But every political incentive in the current climate seems to reward attacks on politicians from the other party, he says, while discouraging collaboration or compromise.

"We as Americans don't just see the people on the other side as having different views, but as evil," Edwards says. "The Republicans try to portray Obama as not just being wrong, but trying to undermine America and being really different and fundamentally bad."

An Erosion Of Support

Edwards and others point out that Obama has not been unique in receiving such treatment.

President George W. Bush also triggered a good deal of rancor, with many Americans talking about how much they "hated" him and at least one well-regarded novelist coming up with a book that turned on a fantasy about assassinating the president.

Of course, it was an Iraqi who actually threw his shoes at Bush. But the feeling that half the country seems to share in contemporary times — that the person in the Oval Office is "not my president" — necessarily leads to a diminution of respect for the office itself.

And the general lack of esteem in which politicians are held seems to be seeping into their relations with one another.