Accessibility links
Etta James: The 1994 Fresh Air Interview Etta James, the legendary vocalist who is perhaps best known for her version of the song "At Last," has died. She was 73. Fresh Air remembers the singer with excerpts from a 1994 interview about her lengthy career. 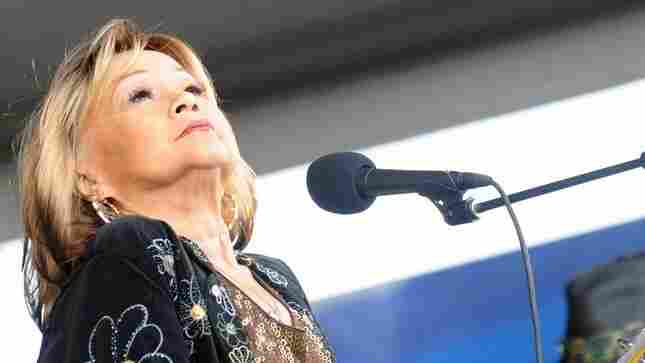 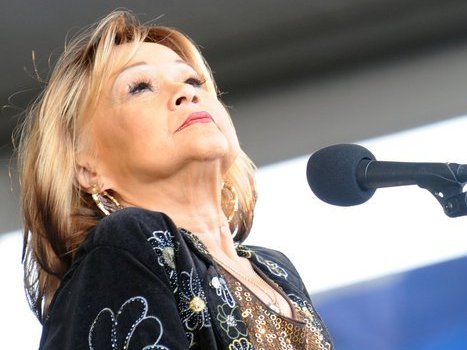 Etta James, the legendary vocalist who is perhaps best known for her version of the song "At Last," has died. She was 73.

In 1994, James joined Fresh Air's Terry Gross for a conversation about her life and her lengthy career in the music business. James explained that she got her big break at 16 when her doo-wop group auditioned for the late Johnny Otis one night in San Francisco. Otis liked their singing and invited James and her two friends to Los Angeles to make a record.

"But I knew my mother wasn't going to let me go," James said. "And he said, 'Can I speak with your mother?' I said, 'No, I can't find her right now. She's working.' And he said, 'Well, can you go home and get permission from your mother, get something in writing stating that you can travel and have her sign it and date it.' I said, 'Oh yeah, I can do that.' So, sure enough, that's what I did. I went home, I wrote the note."

James went to Los Angeles, where she recorded "Roll With Me, Henry" and began performing in Otis' traveling R&B revue. In 1960, she began recording with Chess. Her hits there included "All I Can Do Is Cry," "Trust in Me," Something's Got a Hold on Me" and "At Last."

During the mid-1960s, James began battling a drug addiction that would last for more than a decade. She drifted in and out of rehabilitation centers in Los Angeles.

"While I was in that program, they would take me out to kind of do little gigs here and there," James said. "We went to Africa to do the Black Festival there. We went to the American Song Festival. And so my therapist was taking me around, trying to just, you know, dip me in a little bit to let me know, you know, this is the business here that you've been in all your life."

When she left rehab, James recorded several more albums and opened for the 1978 Rolling Stones World Tour. She says the band had initially approached her several years earlier.

"When I was in rehab at the same rehab center in the '70s, '74, '75, I got a letter from Keith Richards that had said that they were getting ready to do a tour," James said. "And the letter said, 'We would like to have you on tour with us. We love your music, but what you're doing right now is more important than what we could ever do with you, [and] we will be sure to come back and get you when you're ready. And that was really cool. That was when they came back in '78 and kept their word."

Etta James was elected to the Rock and Roll Hall of Fame in 1993 and received the Grammy Lifetime Achievement Award in 2003. She is also the recipient of an NAACP Image Award and multiple honors from the Blues Foundation.

On her mother, who gave birth to Etta at age 14

"She was a kid, and I had feelings about all that kind of stuff for years, and I went to therapy and all about it. But then, as I got older, I realized that she really — she really did the best for me. She put me in a lovely [foster] home. The people were, you know, lovely to me. They never said that they were my real parents, I mean, I always knew I had this good-looking, you know, high-stepping mom, and she was like only 14 years older than me. And so she did the best for me, because if she had tried to take me with her, she was just a child. What would she have done with me? Would I have been singing today? Would I have been anything, you know?"

On her famous platinum blond hair in the 1960s

On giving up drugs

"I had given it up many a time. You know, I had kicked — I'd kicked my habits many a time. But when I went in 1974, I gave heroin up. I was on methadone for maybe three or four years before that. So I had a couple of things to give up."