Accessibility links
Military Drops 'Birth Control Glasses' For Fresher Pair Over 22 years, the military's thick-framed, large-lensed, standard-issue glasses have developed a reputation for seriously hurting their wearer's chances of getting a date. Now, the military is finally offering a new design. 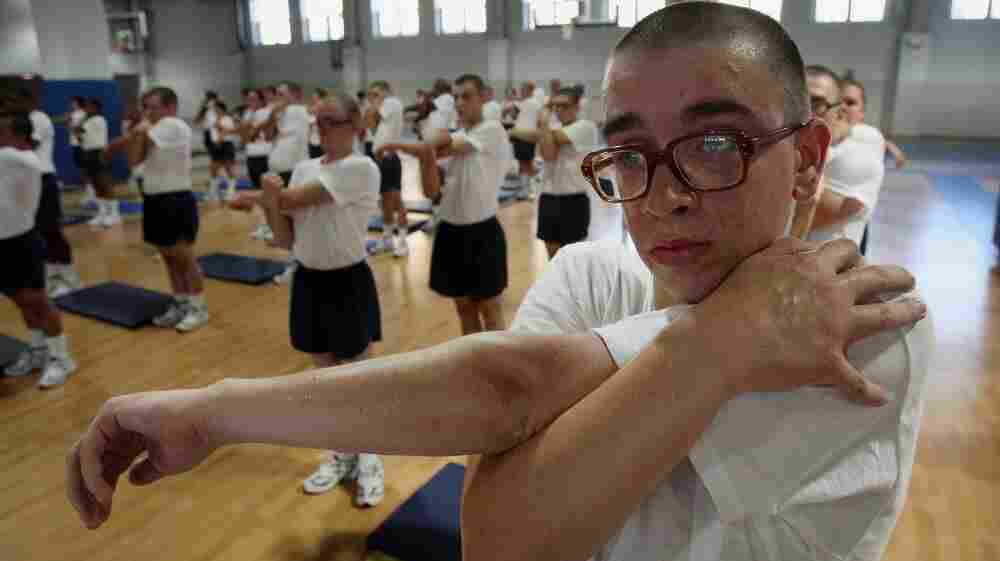 Since 1990, glasses-wearing Navy recruits have been required to wear their standard-issue S9 eyeglasses through training. Scott Olson/Getty Images hide caption

On a military procurement manifesto, they're S9s; but to a new soldier who's just received a new pair, they're BCGs, or Birth Control Glasses. The spectacles' thick frame and large lenses are said to make the wearer so unattractive that chances of connecting with a member of the opposite sex become vanishingly small.

Now, however, the military is offering a new design — a nod to the fact that the standard-issue specs are so ugly, many troops end up stuffing them in the back of their trunk as soon as they leave training.

The military's new 5A standard-issue eyeglasses were put through rigorous testing before they were chosen to replace the older S9 model. Official Navy photo release hide caption

The military's new 5A standard-issue eyeglasses were put through rigorous testing before they were chosen to replace the older S9 model.

"When I entered the Navy initially, we had some gray frames, and then we went to some black frames," Grout says. "When the brown frames came out, we were all a little disappointed."

That was back in 1990. Now, 22 years later, the military is switching to a smaller, sleeker, black-framed style.

"Time will probably tell whether or not the new 5A frame will be considered an improvement," Grout says. "I believe that it will because of the fact that nowadays, it seems to be a little more stylish for a lot of individuals to go back to that Buddy Holly appearance."