Accessibility links
Farewell To An Unlikely Hero: Why 'Chuck' Packed Such A Potent Punch Chuck has never been much more than a blip in terms of ratings. But in a few ways, the story of this little spy comedy that could has been the story of some big changes in television. 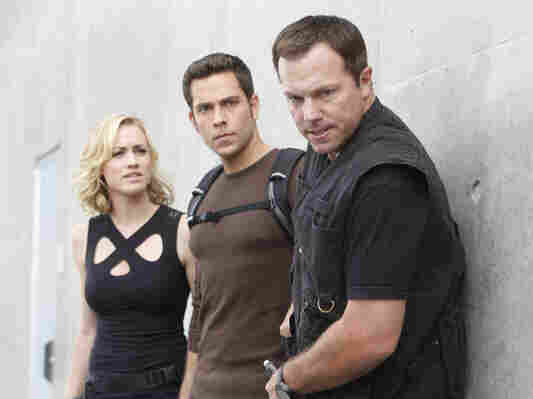 Tonight's double episode marks the end of Chuck, NBC's genial spy-nerd comedy that has existed on a perpetual cancellation bubble since its debut in 2007. Against overwhelming odds and in spite of eternally low ratings, Chuck's life and death speaks in surprisingly potent ways to how television is changing.

More than anything, Chuck is a story about the rise of the fan. Not only because the show has organized devotees — that's not new. (Forget that fact and feel the wrath of the indignant Star Trek fans who campaigned to save their show back in 1968 ) What makes Chuck fans different from most is that rather than just expressing the depth of their love, they tried to think pragmatically as well as passionately about keeping their show on the air.

It's a common internet truism that if you're not paying for ad-supported media, you're not the customer — you, as an eyeball to be advertised to, are the product. It's most commonly said about services like Facebook, but it's just as true of ad-supported television. And Chuck fans, in their businesslike enthusiasm, sold themselves as a product.

Specifically, rather than trying to prove how much they loved the show (which is what it demonstrates when you send a network nuts or Mars bars), they took their argument to a sponsor, Subway, when the third season was imperiled. Attacking sponsors who support shows to which you object is old news; enthusiastically presenting yourself as a potentially loyal customer was an approach that had never been deployed in a way that got so much attention. Even star Zachary Levi participated, marching a small army of fans to a Subway to participate in the campaign to buy a footlong sandwich on the night of the season finale, which fans called "Finale And A Footlong." In a five-part interview with Alan Sepinwall of Hitfix, Josh Schwartz, who co-created the show with Chris Fedak, calls it "the sandwich revolution."

Subway has remained a major sponsor of Chuck, and has been the beneficiary of winkingly obvious product placements that fans have basically promised to cheerfully tolerate. "They brought in Subway flatbread breakfast sandwiches!" says a character in this clip. "With Chipotle Southwest sauce!" When the show's most adoring, social-media-savvy fans see those Subway placements, they don't associate them merely with crude commercialism, but with a successful negotiation. The sponsor, who is normally seen as an intrusive, obnoxious presence in a television show, has managed to become part of the team that brings the show to the people who love it.

It's entirely overstating the case to claim that the fans who happily offered themselves up to Subway — or that the extensive social media campaigns that accompanied the Subway push — saved the show. Network decision-making is far more complicated than that. But what's important about the Subway campaign is that the fans saw themselves differently, not as people who had to beg for kindness from the network, but as people whose most important job was to prove their value to the sponsor. In the crude "you are the product" calculus, it's the difference between offering value to the people you are asking to sell you (the network) and offering it to the people you are asking to buy you (the sponsor).

Of course, Chuck fans became examples of the bad, as well as the good, developments in organized fandom. In their passion, they could be the worst kind of impatient and entitled viewers when it came to plot developments, as I wrote about in February of 2010. Their ability and eagerness to engage could be charming or insufferable, respectful or disrespectful of the creative people who worked on the show.

Chuck became an example of trends in writing about television, too. It benefited from a number of well-publicized appeals from critics for its renewal, led by Sepinwall, then of the New Jersey Star-Ledger, who wrote a list of six reasons to renew the show in April 2009. Many internet-dwelling TV critics spend more and more time not merely reviewing shows in a detached way but tracking their episode-by-episode progress. When that happens, some become less interested in tracking bad shows and focus on advocating for the shows they think are most valuable and perhaps most imperiled. Open letters in support of a show — not merely spotlighting its quality, but also highlighting the business reasons why renewing it makes sense — are a hallmark of this kind of approach.

Another reason Chuck stayed on the air speaks not to the growth of new kinds of support, but to the troubles at NBC. Like other low-rated but critically celebrated NBC shows including Community, Parks & Recreation, and Friday Night Lights, it seems impossible to imagine Chuck and its small-time ratings hanging around at a place like CBS. Chuck can only have benefited, in particular, from the disastrous primetime Jay Leno experiment that left the network scrambling to backfill five hours of its schedule in the spring of 2010, as well as the fact that the network seemed incapable of finding a hit. The fact that the network was looking for a lot of material seemed to ease the way for low-rated shows to perk along, but so, frankly, did the fact that the network took a giant public relations bath (rightly or wrongly) over its treatment of Conan O'Brien. Saving Chuck and Friday Night Lights perhaps bought them a tiny, tiny measure of goodwill. If your old show is likely to be tiny, but your new show is also likely to be tiny, you might as well be briefly liked.

The most painful Chuck lesson, though, is that renewal isn't always without strings. Some of the renewals have included substantial budget cuts and oddly-timed seasons that were longer or shorter than originally planned, which forced the writers to create a number of different episodes that could, if necessary, have been season (or series) finales, and that's not always good for storytelling. The budget cuts were visible to fans, both in a reduced presence for some of the supporting cast and in the scaling down of the action sequences. The show returned over and over, but it certainly took a few bumps along the way.

Ultimately, the story of Chuck is a happy one. It remained an upbeat, good-natured lark that could still pull off some effective drama, it bred a more strategic — or at least a more imaginative — kind of fan campaign, and while it's been creatively uneven at times, it's leaving at a time when its fans still love it, and you can get some will buy footlongs for this finale as well.