Accessibility links
Law-Abiding Mexicans Taking Up Illegal Guns In Mexico, where criminals are armed to the teeth with high-powered weapons, it may come as a surprise that the country has some of the most restrictive gun laws in the world. One community has begun to ask if it's time to make guns easier to obtain legally so they can defend themselves. 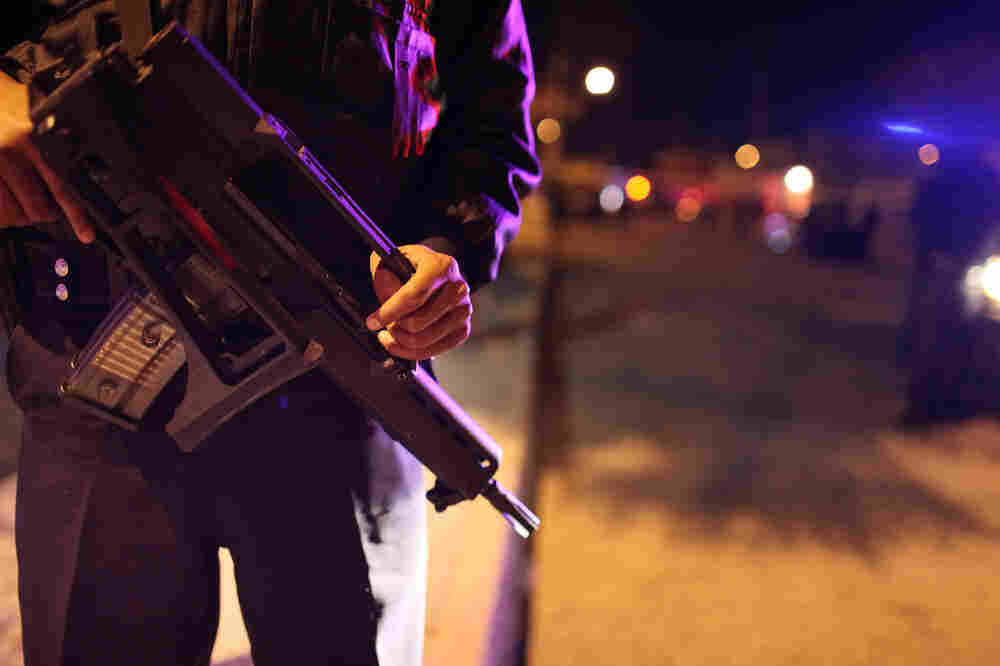 Police stand near the scene of a murder in Juarez, Mexico. The country suffers from drug cartel-related violence despite some of the most restrictive gun laws in the world. Spencer Platt/Getty Images hide caption

In Mexico, where criminals are armed to the teeth with high-powered weapons smuggled from the United States, it may come as a surprise that the country has some of the most restrictive gun laws in the world.

Law-abiding Mexicans who want a gun to defend themselves have no good options. Either they fight government red tape to get a legal permit, or they buy one on the black market.

After an outbreak of violence, one embattled community in northern Mexico called Colonia LeBaron has begun to ask if it's time for the country to address its gun laws.

A farming town about 130 miles southwest of El Paso, Texas, in the border state of Chihuahua, Colonia LeBaron was founded by breakaway Mormons from the U.S. who wanted to practice polygamy. Today, most residents hold dual citizenship, speak English and retain close ties to the U.S. A few still practice plural marriage.

A Community Arms Itself

The militancy of Colonia LeBaron began on May 5, 2009, when kidnappers seized a 16-year-old boy and demanded a $1 million ransom.

Though he was released unharmed, the townsfolk came together and formed an anti-crime group to take a stand against the rampant kidnappings and extortion. Their leader was Benjamin LeBaron.

But on July 7, 2009, close to 20 men showed up at Benjamin LeBaron's house, according to his older brother, Julian LeBaron.

"They wanted to terrorize everyone into never opposing them," Julian LeBaron says. "They dragged Benjamin out of his house, and [his brother-in-law Luis Widmar] came to help him."

Then, he says, the criminals took the two men a couple of miles down the road and shot them. 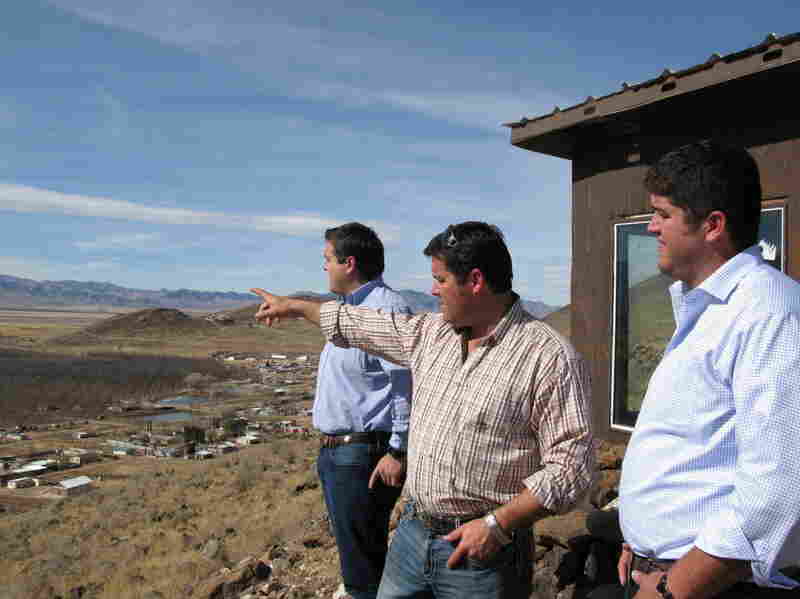 Alex, Daniel and Max LeBaron look out over Colonia LeBaron in Chihuahua, Mexico, in front of a shack they built as a lookout against approaching criminals. The murder of two citizens galvanized this community to protect itself, Alex says. Peter Breslow/NPR hide caption 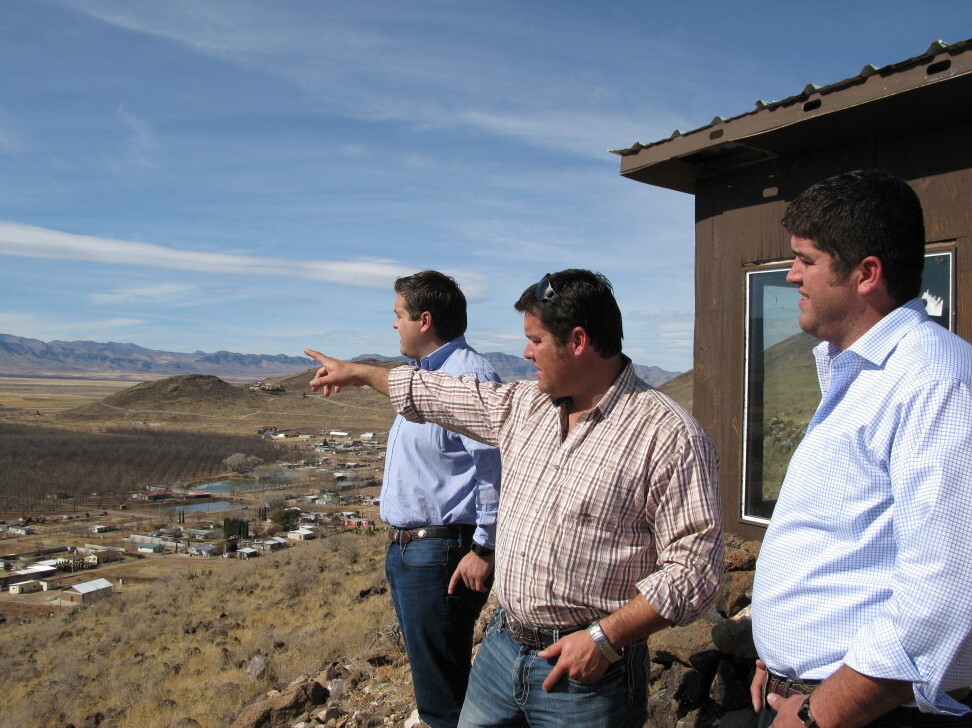 Alex, Daniel and Max LeBaron look out over Colonia LeBaron in Chihuahua, Mexico, in front of a shack they built as a lookout against approaching criminals. The murder of two citizens galvanized this community to protect itself, Alex says.

The cold-blooded murders of Benjamin LeBaron and Luis Widmar galvanized the community, Julian LeBaron says. It prompted them to take a stance that is familiar to Second Amendment advocates in the U.S., but one that is taboo in Mexico.

"I think there would be less violence if there were more guns, in the sense that I could barge in here and do whatever I want, knowing that this guy doesn't have a gun," says Jose Widmar, the brother of slain Luis.

Today, if the gangsters return, the LeBaron colony is locked and loaded.

They have an advocate in their cousin Alex LeBaron, a 31-year-old Chihuahua state deputy with national aspirations. He's a burly, baby-faced politician who attended college in New Mexico and served in the U.S. Navy. His own father was killed in a carjacking.

If Alex LeBaron makes it into the federal congress, his most passionate issue will be changing Mexico's convoluted gun laws.

"We're Mexican citizens 100 percent, and we have the right to bear arms, and we're going to keep fighting for that right as long as it takes," he says.

'Complex And Expensive' To Buy A Gun

Alex LeBaron and some friends have gathered at a nearby gun club to plink away at steel duck silhouettes. Joining a sport shooting club is one way to avoid the aggravation of obtaining an individual permit.

Though the Mexican Constitution permits gun ownership, the government strictly limits that privilege as a response to the violence of the Mexican revolution and to uprisings in the 1960s when students looted gun stores in Mexico City.

"In the black market, it's very easy to acquire mostly American-made weapons here in our country, but through the legal process it's ... very complex and expensive," Alex LeBaron says. 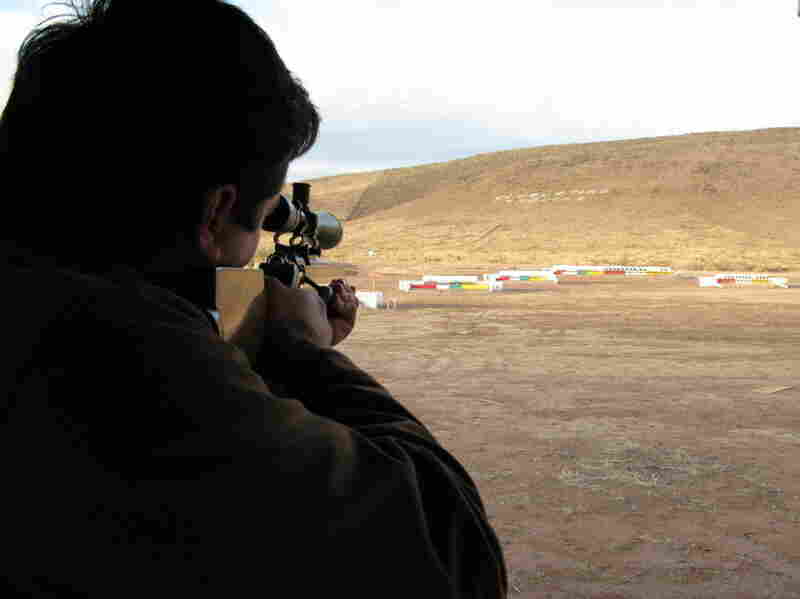 Alex LeBaron points his gun toward a target at a local shooting club. If Alex makes it into the federal Congress, his most passionate issue will be changing Mexico's gun laws. Peter Breslow/NPR hide caption 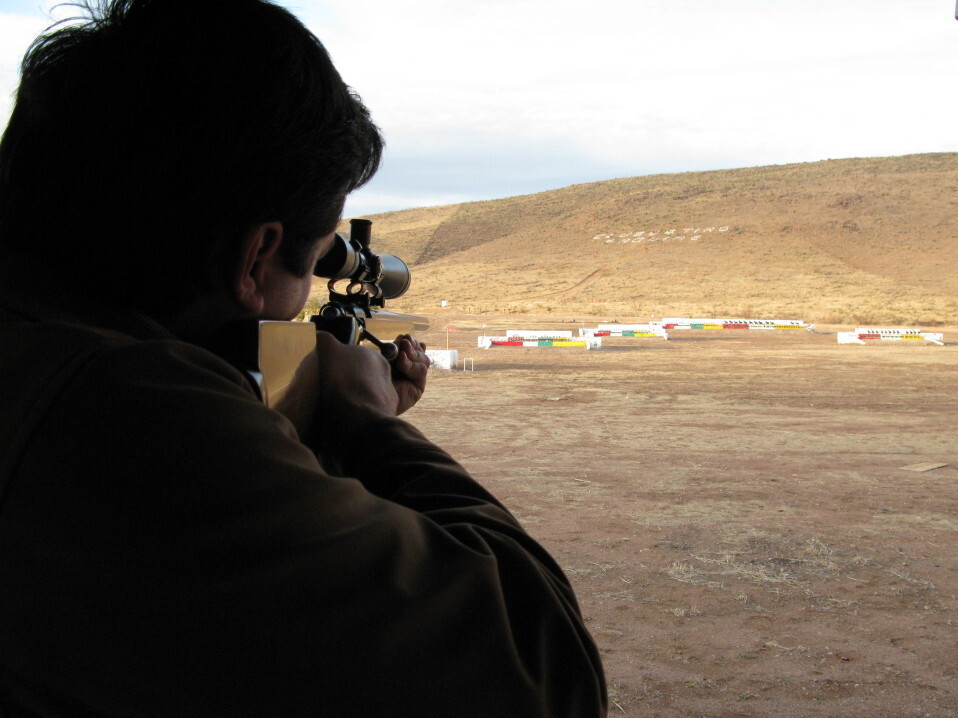 Alex LeBaron points his gun toward a target at a local shooting club. If Alex makes it into the federal Congress, his most passionate issue will be changing Mexico's gun laws.

A citizen who wants a permit for a weapon must apply to the Mexican military — a process that can cost upward of $10,000. Then they pay to have the permit renewed annually. The military further regulates the caliber of weapon, how many guns a person can own, how much ammunition they can buy each month, and where in the country they can take the weapon.

The government abolished the last private gun store in 1995. Today, the only legal gun store in the country is in Mexico City, guarded and operated by the armed forces.

"In Mexico, the laws effectively don't allow you to purchase weapons," says Dr. Oscar Urrutia Beall, a longtime member of the Paquime Shooting Club. "There are some weapons they sell in Mexico City, but the paperwork is difficult. Here, they won't let us buy a gun, but they let us own a gun. It's an incongruity, a failed law."

A Gunfight With The Mexican Army

On the LeBaron family farm outside of town, workers pack red chilies for shipment to New Mexico. The family also grows alfalfa, pecans and cotton on irrigated fields bordered by the windswept foothills of the Sierra Madre mountains.

The LeBarons now have a reputation of being well-armed and not afraid to use their weapons.

One night, in October 2009, a gunfight erupted between the LeBaron brothers and a squad from the Mexican army. The LeBarons claim the soldiers came to the front gate and did not identify themselves. Fearing they were kidnappers, Alex says, the family opened fire.

"In the middle of [the] dark, sometimes, it's better to shoot and ask questions later," he says.

One soldier was killed. One LeBaron brother and another farmer were charged with murder, but the judge ultimately dropped the charges because the evidence had been tampered with.

These days, things have quieted down in Colonia LeBaron. Some people say it's because of the soldiers garrisoned in town. The LeBarons maintain it's because the criminals know the community will fight back.

And if more communities were allowed to defend themselves, says Alex LeBaron, Mexican organized crime would be on the run.

"I think Mexico's way past that revolutionary uprising point in our history," he says. "I think we're ready to come into the 21st century and be part of this whole global process of modernization. And this is one of them — gun laws."

But do Mexicans want gun laws similar to those in the U.S., where buying an assault rifle can be as easy as buying a beer?

Basilio Sabata Salaices is the mayor of the municipality where Colonia LeBaron is located. "Here, guns are very restricted," he says. "But I see in the U.S. many things happen because youth don't know how to use guns. I don't think we should make it easier to possess a weapon, as in the U.S."

Beto Renteria is a prominent businessman in Nuevo Casas Grandes, whose wife was kidnapped three years ago and returned after he paid ransom.

"There are lots of Mexicans who have never shot a gun," he says. "It could be dangerous putting a gun in the hands of an inexperienced person; we could hurt someone."

Fernando Saenz is the leader of a citizen's militia in Ascension. The town made headlines last September when a mob beat two suspected kidnappers to death.

Like many Mexicans in regions plagued by violent crime, Saenz owns an illegal, unregistered weapon — in his case, a 9 mm handgun.

I think guns are not advisable. I think what the government should do is put honest, well-trained people in jobs to impart justice.

Fernando Saenz, leader of a citizen's militia in Ascension

"Look," Saenz says pensively, "I think guns are not advisable. I think what the government should do is put honest, well-trained people in jobs to impart justice."

If these three responses are any guide, the LeBarons' crusade to revise gun laws is at odds with a certain cultural ambivalence toward firearms, at least among law-abiding Mexican citizens.

Alex LeBaron is undeterred. "I have to stress very strongly that if the federal government, the state government or the local government cannot protect you from the cartels or any criminal groups, we should be able to protect ourselves. That's the bottom line," he says.

Asked if the community is openly flouting federal gun laws, he replies: "Yes. We have to."

The Mexican secretary of National Defense, charged with enforcing gun laws, declined to comment for this story.

The director of a pro-gun website called Mexico Armado said there is no popular movement at the moment to liberalize the nation's gun laws. Perhaps, he added, that's because anybody who wants a weapon in Mexico — be they a good guy or a bad guy — has no problem getting one.