Accessibility links
Minnesota Festival On Ice Melts Art's Boundaries Call it the Burning Man of the Midwest: a temporary city, built around artistic expression. On a frozen lake outside of Minneapolis, the ice shanties are filled with art and dance parties.

Call it the Burning Man of the Midwest: a temporary city built around artistic expression. Only this one takes place in the suburbs of Minneapolis in the middle of winter.

Minnesota is known for its 10,000 lakes. When the lakes freeze for the winter, the state is known for its ice fishing and its ice shanties — little homemade fishing shacks full of heaters, radios and bottles of schnapps.

On Medicine Lake, 20 shanties are part of a festival called Art Shanty Projects. They're filled with art and dance parties. The festival closes next weekend, and organizers expect about 10,000 visitors before it's done.

Although it's a bitter 15 degrees, hundreds of people are out, bundled in winter coats, long underwear and the occasional neon jumpsuit.

"This whole project kind of expands people's ideas of what art can be," says Peter Haakon Thompson, who co-founded Art Shanty in 2004. "I think a lot of people are intimidated by museums and galleries, and think that they're going to do something wrong when they're there. And there's definitely not that feeling out here." 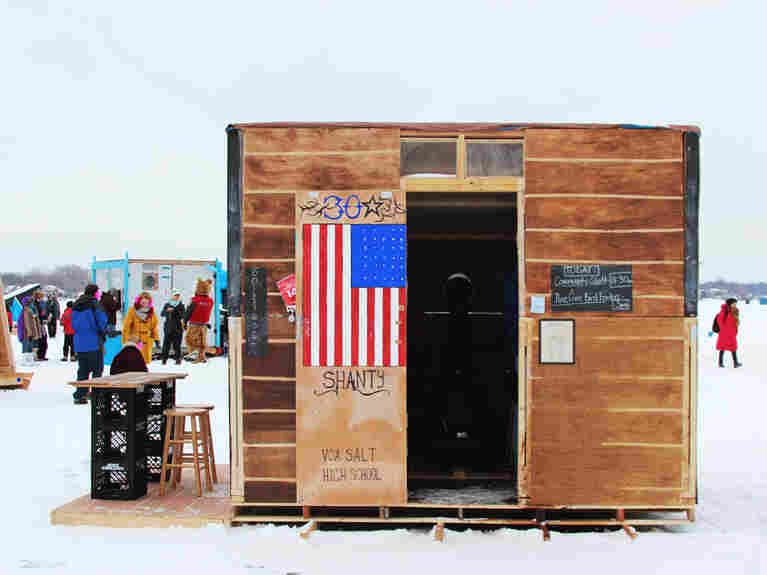 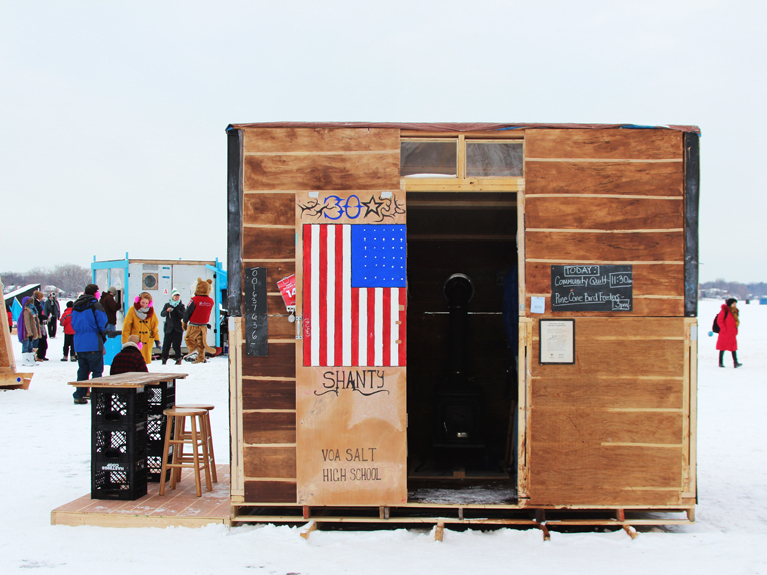 All sorts of people are skidding around the frozen lake. Sixteen-year-old Lu Xiao Ge is with a group of 54 Chinese exchange students, who are almost speechless at the sight.

There are some great installations out on the ice. A giant robot waves its arms, and a daily newspaper is printed by hand on an old letterpress.

Then a weirdly silent mob of people starts dancing. They all sport fuzzy pink headphones from the Audio Adventure Shanty, which give them the beat. One dancer lifts his headphones to share the music and offers up another pair.

Artist Nathaniel Freeman says this sort of interplay — a kind of conversation between audience and artist — has really become the focus.

Also, Freeman says, people come out because it's Minnesota.

"Winter's so legit here. People really do fish out of ice shanties," he says. "So that feels like there's a good entry point."

However, most shanties wouldn't have a local folk music trio playing up in the loft.