Accessibility links
The Clash Over Fingerprinting For Food Stamps If New York Gov. Andrew Cuomo has his way, New York City will no longer fingerprint food stamp recipients. He says fingerprinting stigmatizes needy people and stops them from applying for assistance. But Mayor Michael Bloomberg disagrees, arguing that without fingerprinting, fraud would escalate. 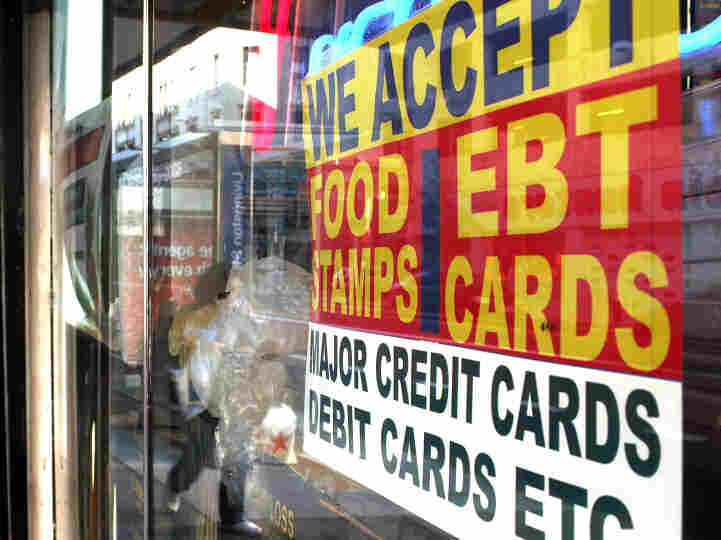 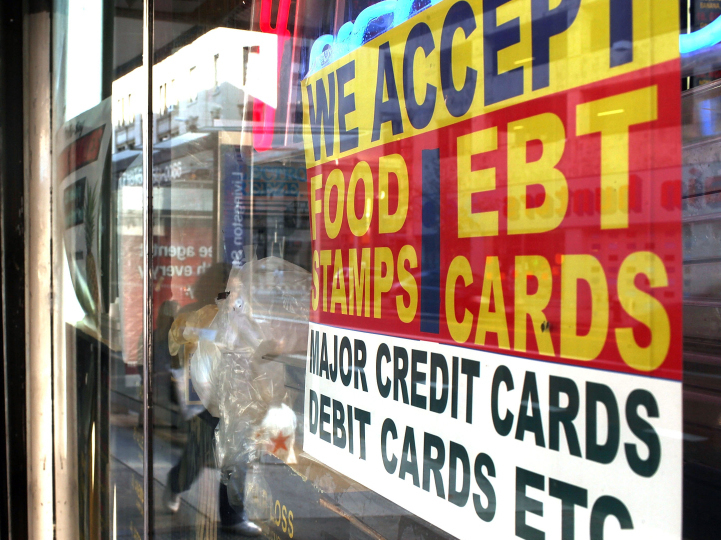 A sign in a New York City market window advertises that it accepts food stamps.

Gov. Andrew Cuomo wants New York City to stop requiring fingerprinting of its food stamp recipients, a stance that puts him at odds with the city's mayor, who favors the practice.

Cuomo says fingerprinting stigmatizes needy people and stops them from applying for help. In a recent State of the State speech, Cuomo pledged to stop fingerprinting food stamp recipients this year.

Besides Arizona, New York is the only place where the policy still exists. New York was one of the first states in the country to use digital imaging to take people's fingerprints back in 1996. Three other states eventually adopted the practice, but two of them — California and Texas — ended fingerprinting last year. New York City remains the only place in the state that fingerprints food stamp recipients.

A person who is in need of food will embrace the fact of getting fingerprinted to keep themselves fed, to keep their families unstarved.

"There's no doubt that there will be a rise," says Erasma Beras-Monticciolo from the East River Development Alliance, a nonprofit that administers food stamp applications. She says her group works with several populations that shun fingerprinting, including women recently released from prison.

"It's a continuous dialogue with them about why you should access these benefits, what it's going to mean for yourself to create some stability in your life," Beras-Monticciolo says.

The food stamp counselor says the working poor, who find it difficult to take days off, also avoid food stamps because of the long process, which includes standing in line to be fingerprinted. But outside a food stamp office in Manhattan, food stamp recipient Oliver Briscoe said if people need food bad enough, they will go through the process.

"A person who is in need of food will embrace the fact of getting fingerprinted to keep themselves fed, to keep their families unstarved," he says.

It's basically like when you're going through central booking or something. You're getting booked, and you feel like you're getting fingerprinted, with one finger here and one finger there.

Briscoe says he is disabled and he receives $200 a month in food stamps. He believes fingerprinting is the best way to make sure only the truly needy receive the benefit. It's the same argument Bloomberg makes. According to the city, in 2010, fingerprinting detected 1,900 duplicate food stamp cases. About 1.8 million people received food stamps that year. The catch saved taxpayers just over $5 million. The city is not able to say how many of those cases were fraud.

Russell Sykes, senior fellow at the Empire Center for New York State Policy, believes any amount of savings is important.

"Program integrity is equally important as program access. You are already seeing now the food stamp program being brought up in the context of national politics, and the more one can say that the program gets benefits to the right people with integrity, the better that program is," he says.

Sykes also questions whether fingerprinting is stifling participation given the recent rise in food stamp users. According to city statistics, since 2007, the number of food stamp recipients rose by more than 700,000 people.

Nicole Cuffee was laid off a year ago and became one of those food stamp users. She says she felt stigmatized by being fingerprinted but went through with it anyway.

"It's basically like when you're going through central booking or something. You're getting booked, and you feel like you're getting fingerprinted, with one finger here and one finger there," she says.

By the city's own estimates, there are more than 600,000 New Yorkers who are eligible for food stamps but who don't go through the process. That's a participation rate of 71 percent — just below the national average.