Accessibility links
New Republic: Why Old People Could Save Newt The Republican presidential campaign is revolving around candidates Mitt Romney and Newt Gingrich. Walter Shapiro of The New Republic notes that all it takes for Gingrich to prove that he is not yesterday's man is a GOP primary electorate that remembers yesterday.

New Republic: Why Old People Could Save Newt

New Republic: Why Old People Could Save Newt 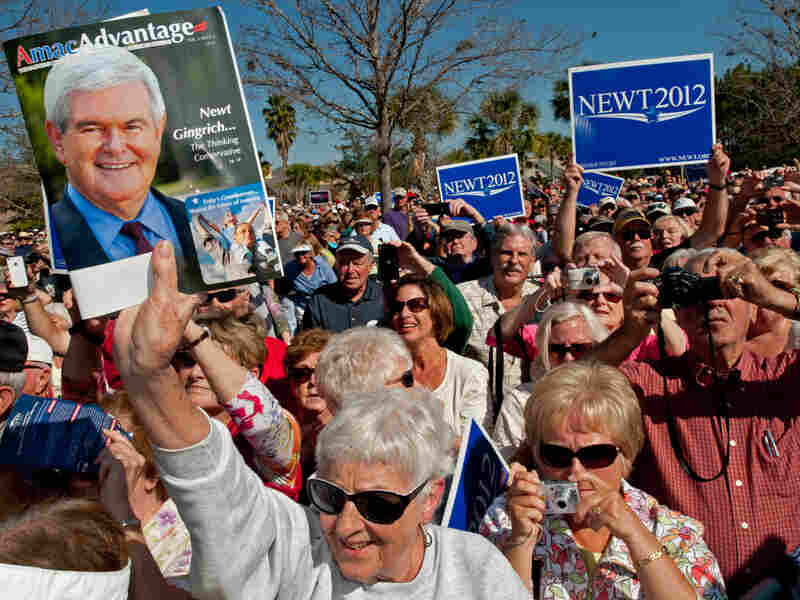 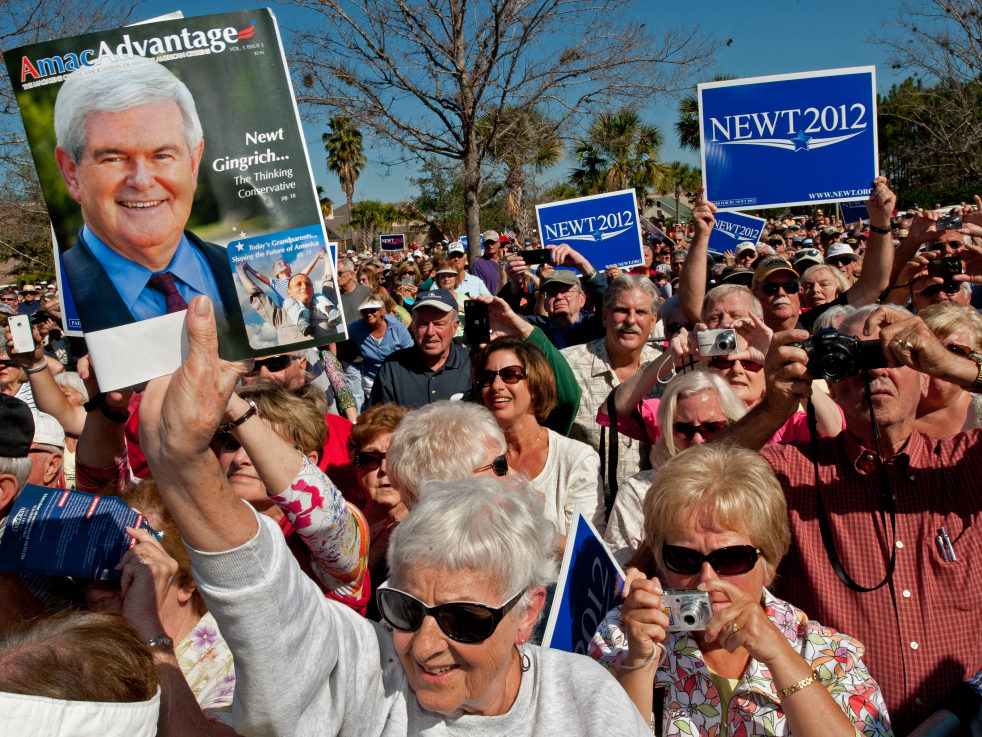 Supporters cheer the arrival of Republican presidential hopeful Newt Gingrich during a campaign rally Jan. 29, 2012, at a retirement community called The Villages, in Lady Lake, Florida. The elderly may boost Gingrich's campaign.

Read More On The 2012 Presidential Election

Walter Shapiro is a special correspondent for The New Republic. He also writes the "Character Sketch" column for Yahoo News.

During the 1960 West Virginia primary, John Kennedy campaigned in tandem with Franklin D. Roosevelt Jr. to claim that he — and not liberal stalwart Hubert Humphrey — was the rightful heir to FDR. The biopic shown at the 1992 Democratic Convention showcased difficult-to-locate footage of Bill Clinton shaking hands with JFK at the White House in 1963 as an Arkansas delegate to Boy's Nation.

Even by these bygone standards of the-torch-is-passed iconography, it is hard to top the battle for Ronald Reagan's legacy being waged in the Florida primary. All that's left is for a smiling Reagan to step through the gates at Disney World to set the record straight as Marshall McLuhan did in Annie Hall.

During Thursday night's debate, all four candidates invoked Reagan — and both Rick Santorum (winning back Reagan Democrats) and Newt Gingrich (replicating the 1980 landslide) featured the Gipper in their closing arguments. Gingrich, who portrays himself as a "bold Reagan conservative," will be barnstorming across Florida Monday with Michael Reagan, the Republican version of FDR Jr. And the former House speaker has also unearthed a 1995 video of Nancy Reagan calling him her husband's heir as she dutifully read from a prepared speech text. Mitt Romney, as part of his successful scorched-earth comeback campaign, has repeatedly pilloried Gingrich as a heretic who challenged Reagan while he was alive and scorned him in death. Of course, Romney with his attacks has been glossing over the inconvenient ideological truth that he only became a registered Republican five years after Reagan left the White House.

Demographics help explain why the Reagan Wars have reached such a fever pitch in Florida. About three-quarters of the Republicans casting ballots in next Tuesday's primary will have been old enough to have voted for Reagan in 1984. (This estimate is based on the exit polls from the 2008 Florida GOP primary in which 75 percent of Republican voters were over 45 and 44 percent were older than 60). Not even in Iowa, where a significant chunk of GOP caucus-goers seems almost old enough to have posed for Grant Wood's "American Gothic," is the Republican vote so tilted towards those with long historical memories.

Up until now, Gingrich has been especially successful at appealing to the I-remember-the-invasion-of-Grenada voting bloc. In Iowa, New Hampshire and South Carolina, according to exit polls, there was a powerful, but little-noticed, straight-line trend — the older the voter, the higher the level of Gingrich support. Since Gingrich finished fourth in both Iowa and New Hampshire, this age skew did not fit into a convenient campaign narrative. But in South Carolina, it was key to the Newtonian bomb that leveled the political landscape and sent the GOP establishment into full panic. Gingrich support in the January 21 primary rose from 28 percent among the small slice of under-30 votes to 40 percent among middle-aged Republicans to 47 percent among South Carolina voters mature enough to collect Medicare.

(The pattern appears to be holding among recent Florida primary polls, even though not all of them publish age breakdowns. The NBC News/Marist Poll, released Sunday, shows Gingrich's support rising from 21 percent among the under-45 set to 29 percent among voters older than that. A Quinnipiac Poll, conducted just prior to Thursday night's debate, showed a more dramatic trend with Gingrich's vote share jumping from one-sixth among those under 50 to one-third among plus-50 voters).

While the 68-year-old Gingrich represents an older person's idea of an older person (campaigning on weekends in suits and reveling in his shock of white hair), he is not running against the GOP youth brigade. Romney is 64 and Ron Paul was born during Roosevelt's first term — and probably protested FDR's abandonment of the gold standard from the cradle.

The key to Gingrich's age-based strength is probably that these older voters vividly remember his 1994 breakthrough victory to become House speaker and the four turbulent years in which he battled (and sometimes compromised with) Bill Clinton. What this means is that these voters possess a nuanced portrait of Gingrich that neither echoes the Romney attack ads nor Newt's own braggadocio. This two-decades-long history also grants Gingrich more latitude than Romney or Rick Santorum in his deviations from right-wing orthodoxy. The fact that Gingrich personifies the conservative brand — at least for older Republicans — makes it that much harder for Romney to portray him as a turncoat Reaganite.

Obviously, Gingrich is no Reagan even if Callista is channeling her Inner Nancy. But there are surprising affinities between Newt's political situation today and the 65-year-old Reagan's outsider status during his 1976 challenge to Jerry Ford. Declaring his candidacy in November 1975 at the National Press Club in Washington, the former two-term California governor declared in words that have a contemporary ring, "Our nation's capital has become the seat of a buddy system that functions for its own benefit — increasingly insensitive to the needs of the American worker who supports it in taxes."

But after losing the New Hampshire primary to Ford by 1,317 votes (in an echo of this year's Iowa caucuses, the tally was later disputed), Reagan was on the ropes as he (another echo) trailed in the polls leading up to the Florida primary. As Jules Witcover recounts in Marathon, his chronicle of the 1976 campaign, Ford told reporters aboard Air Force One, "Florida is really the key. If we win and win very well in Florida, they ought to know that they can't win." Not only did Reagan lose Florida, but he also was walloped by 19 percentage points in Illinois, the state of his birth. After Illinois, according to Witcover, Reagan aides discussed among themselves (without consulting the candidate) whether "to make contact with the Ford people and let them know that Reagan was ready to withdraw gracefully."

But Reagan, with his campaign $2-million in debt and his plane about to be grounded because of non-payment of bills, found his issue (the Panama Canal), as he pulled off a stunning upset in the North Carolina primary. That victory and follow-up wins in other southern primaries fueled Reagan as he carried his fight against Ford and the GOP establishment to the floor of the Kansas City convention. Something tells me that Gingrich remembered that Reagan story line as he boldly declared during a Saturday press conference that — regardless of the Florida outcome — "I will go all the way to the convention."

None of this guarantees that political history will repeat itself as either tragedy or farce. But again and again, the largely youthful campaign press corps has sold Gingrich short. Maybe Florida is indeed the end of the line for Gingrich's frail hopes to be the GOP nominee. But all it takes for Gingrich to prove that he is not yesterday's man is a GOP primary electorate that remembers yesterday — and the day before.