Accessibility links
Pythons Blamed For Everglade's Disappearing Animals The Florida Everglades is infested with Burmese pythons. To keep them from spreading, the U.S. Fish and Wildlife Service is making it illegal to import the pythons into the country, or transport them across state lines. Scientists have discovered the pythons are doing more damage than ever imagined.

The Florida Everglades is infested with Burmese pythons. To keep them from spreading, the U.S. Fish and Wildlife Service is making it illegal to import the pythons into the country, or transport them across state lines. Scientists have discovered the pythons are doing more damage than ever imagined.

Florida has a snake problem. The Everglades is infested with Burmese pythons. To keep them from spreading, the U.S. Fish & Wildlife Service is making it illegal to import the pythons into the U.S., or transport the snakes across state lines. Now scientists have discovered that the pythons are doing more damage than they ever imagined. NPR's Christopher Joyce reports on pythons gone wild.

CHRISTOPHER JOYCE, BYLINE: Go to YouTube and type in Florida pythons and you can spend hours watching these giants slithering, hatching, and most especially, eating. For these imports from Asia, Florida is the big easy. Biologist Michael Dorcas explains:

MICHAEL DORCAS: There really hasn't been snakes large enough to eat things like possums and raccoons in Florida for, you know, literally millions of years. And so the prey species, such as a raccoon or a rabbit or a possum, may not perceive a python as a predator.

JOYCE: They call them naive because they just don't know enough to run away. Just how naive became clear after Dorcas drove thousands of miles through the Everglades, counting mammals. Compared to the 1990s, well over 90 percent of the raccoons, possums, white-tailed deer, and bobcats in the Everglades are now gone.

Dorcas, a snake expert from Davidson College in North Carolina, says there's no evidence that disease did them in. He blames the pythons. Other biologists agree. Susan Jewell of the U.S. Fish and Wildlife Service says some invasive species take over when they find a new place.

JOYCE: Burmese pythons fit that category. They eat everything, they like water, and they can live a year without eating. And Jewell says their potential range is huge.

JEWELL: It's basically the southern third of the United States and our island territories. And that's pretty enlightening.

JOYCE: That's one reason the Fish and Wildlife Service, this month, made it illegal to import Burmese pythons and three other species of constrictors. Starting next March, you can't transport them across state lines either. You can still own them, however, or buy and sell them within a state.

Pet owners take a lot of blame here, for letting pythons loose when they get too big. Marshall Meyers, with the Pet Industry Joint Advisory Council, says that may or may not be true. But, he says, the ban is overkill.

MARSHALL MEYERS: I think for those people that are dealing in the Burmese python, it's going to have some significant financial impact.

JOYCE: Meyers says the government should, instead, set up a permit system to allow inter-state trade. And also to make sure people who buy the snakes know what they're in for. Meyers says, increasingly, people do not.

MEYERS: A significant number of the reptiles today are traded over the Internet or at reptile shows. These are not going through traditional bricks and mortar type pet stores, where they have care sheets they give out, they explain the information about the animals.

JOYCE: In any case, it's too late for the Everglades. Dorcas and Jewell say there's no clear way to get rid of the pythons. And they're likely to get hardier over time. As for the damage, Dorcas says it's never good to lose a big chunk of the animals in any habitat.

DORCAS: Any time you have, you know, a large percentage of your mammals that suffer severe declines like this, it's pretty safe to assume there's going to be some major ecosystem impacts.

JOYCE: Dorcas published his research in the journal Proceedings of the National Academy of Sciences. 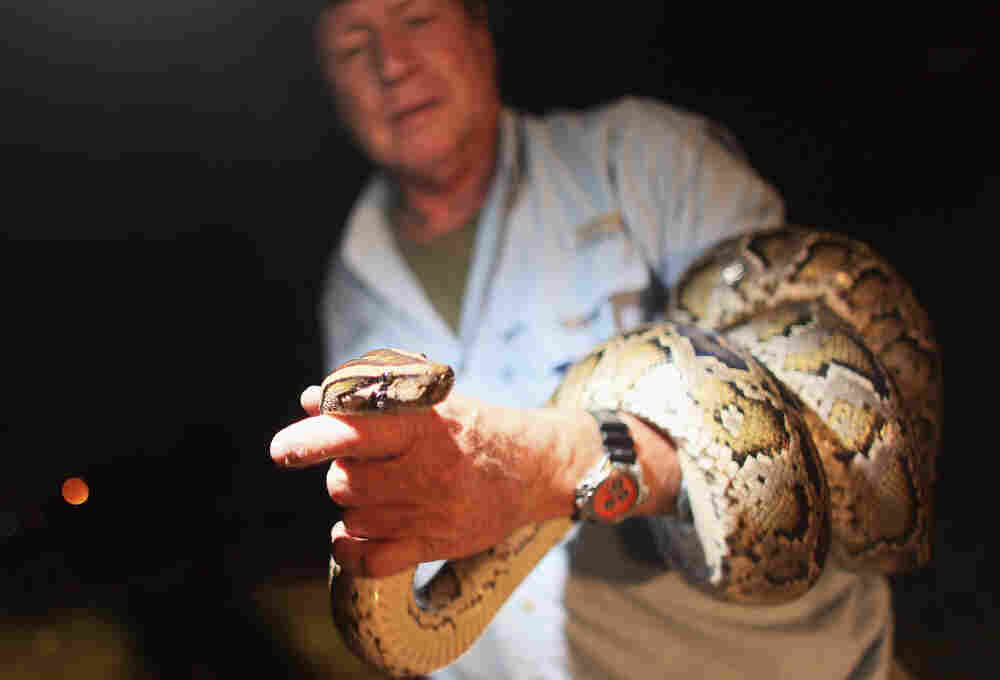 Joseph Wasilewski, a wildlife biologist, captures a wild python on the side of the Tamiami Trail road that cuts through the Florida Everglades on Sept. 16, 2009. The number of invasive pythons in the Everglades has exploded since the 1990s. Joe Raedle/Getty Images hide caption

Scientists are reporting that aliens are wiping out the animals in Florida's Everglades.

The aliens are Burmese pythons from Asia. They've been slithering around south Florida for decades. But scientists now say the constrictors are so bad, they're eating their way through the swamps. And the federal government has decided to take action to prevent their spread.

One scientist who has been trying to find out just how bad the invasion has become is Michael Dorcas. He's been catching snakes since he was a child in Texas. But he says a 15-foot Burmese python is a handful ... or two.

"You typically try to grab them behind the head," he says, and "get somebody else to grab the back end of them. But often they still defecate all over you, even if they can't bite you, so it's always an unpleasant thing when you catch a wild python."

Dorcas is now a biologist at Davidson College in North Carolina. For the past eight years, besides catching pythons, he has been driving through the Everglades counting animals — specifically, midsize mammals.

Dorcas wanted to know how big a bite the pythons are taking out of the mammal population. When he compared the number of mammals now with the 1990s, when pythons were less common, he was shocked. "Once we calculated the percentages, we had no idea they were going to be this dramatic."

How dramatic? "A 99.3 percent decrease in raccoon observations," he reports. "Decreases of 98.9 percent in possums, 94 percent white-tailed deer, 87.5 percent in bobcats."

Pythons Removed From The Everglades

Nearly all the raccoons, possums, deer and bobcats gone.

Now, counting animals by sight from a car isn't foolproof, but it is an accepted practice in wildlife research.

Dorcas reports his findings in the Proceedings of the National Academy of Sciences. He says it's the first study to actually quantify the effect of the pythons' appetite in the Everglades.

He blames pythons because in areas known to be thickest with the snake, the mammals are scarcer. Where there are fewer pythons, there are more mammals. And there's no evidence that a disease is to blame, either. Furthermore, mammals and birds (the latter are also common snacks for pythons, as necropsies have revealed) often gather near water, where pythons like to feed. And Dorcas points out that snakes big enough to eat a good-sized raccoon haven't lived in Florida for millions of years. So "local" animals are "naive."

The onset of the python invasion is often blamed on snake owners who release their pets when they get too big for comfort.

Lawyer Marshall Meyers represents the pet industry and the Pet Industry Joint Advisory Council. He says maybe some pet owners do that, but he also cites a report that a hurricane overwhelmed a snake breeding site in Florida that could have spread the snakes. And while pythons are no doubt eating mammals, it's more complicated than that.

"I think it's habitat loss," Meyers says, and the fact that there's less fresh water in the Everglades now, which could reduce wildlife numbers.

But he acknowledges that the python invaders and other exotic animals that escape or are released by owners give the pet trade a bad name.

"They're species that are not in this country, that we do not want in this country, because if they came in through pet trade or through the zoos, they can cause a lot of environmental harm, and that's just a big black eye," he says. 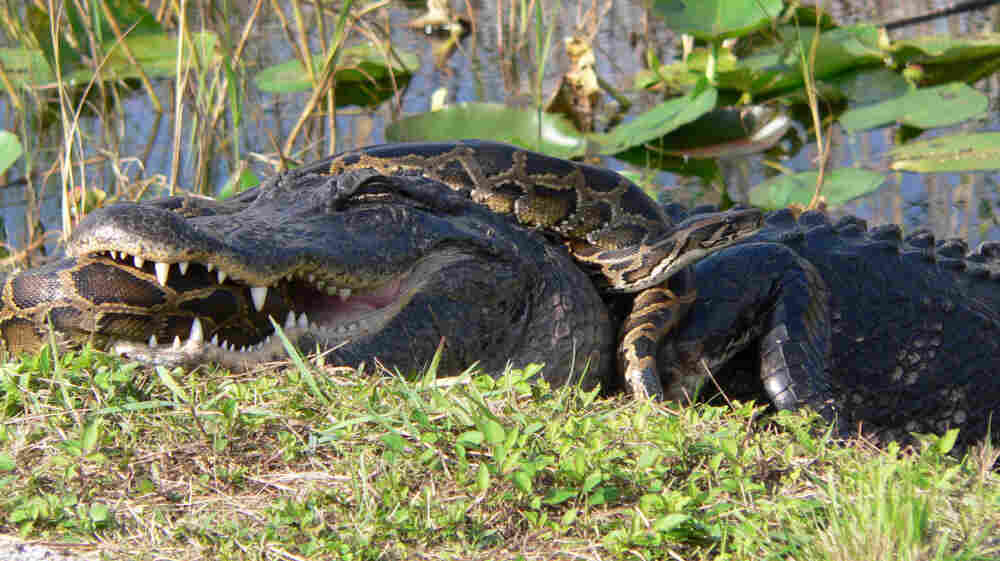 Unlike this alligator, many animals native to the Everglades didn't evolve to take on a giant python. As a result, the snakes have become top predators in the environment, decimating populations of raccoons, opossums and other mammals. Lori Oberhofer/National Park Service hide caption 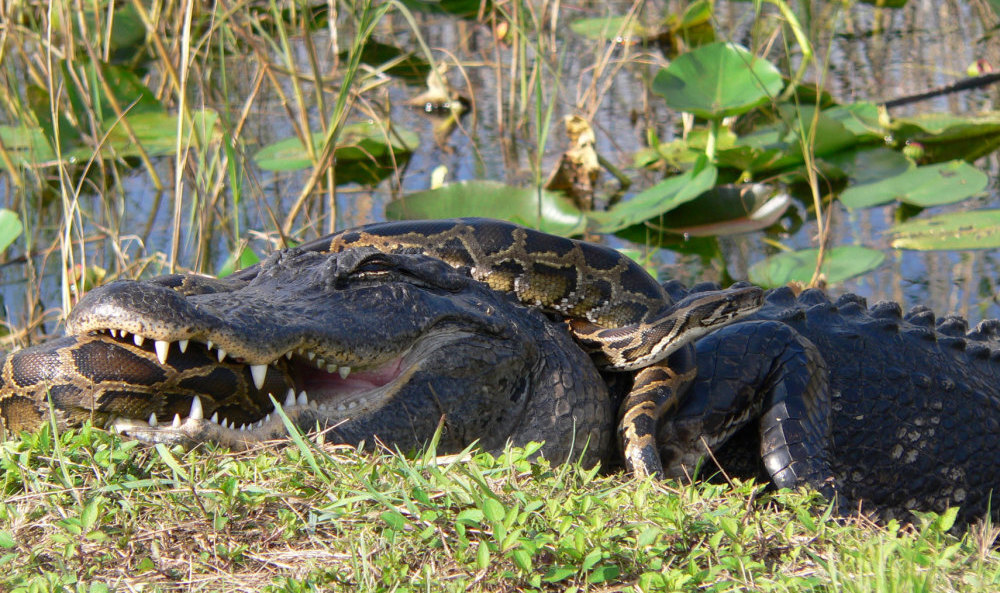 Unlike this alligator, many animals native to the Everglades didn't evolve to take on a giant python. As a result, the snakes have become top predators in the environment, decimating populations of raccoons, opossums and other mammals.

A Ban On Importing Pythons

The U.S. Fish and Wildlife Service has been watching the python explosion and is taking action. On Jan. 17, the agency made it illegal to import Burmese pythons or transport them across state lines. That includes three other constrictor species from Africa and South America: the yellow anaconda and the northern and southern African pythons.

Biologist Susan Jewell, with the service, studies injurious species that invade the U.S. — things like zebra mussels and poisonous lionfish. She says it's possible Florida's pythons could spread if they learn how to survive in colder weather. "I think that it's a good heads-up for everybody," Jewell says. "This can happen anywhere — and most likely will if these snakes get established."

Jewell says invasive species sometimes thrive in new places where they don't have natural enemies. "It just shows what we don't know about species when they get taken out of their native range and taken to a new area," she says.

Jewell says the import ban won't help the Everglades — it's too late there. It's meant to keep pythons and other constrictors from spreading. The Fish and Wildlife Service's research suggests that they could live almost anywhere in the Southern U.S.

The ban allows people who now own these snakes to keep them, and you can still buy and sell them within a state or export them overseas. Jewell emphasizes that the new rule doesn't mean anyone has to give up his snake.