Accessibility links
In Israel, A Nonstop Debate On Possible Iran Strike Speculation is mounting over whether Israel will attack Iran's nuclear facilities sometime soon. Israelis see Iran as a threat, but many wonder whether it would be worth the price. 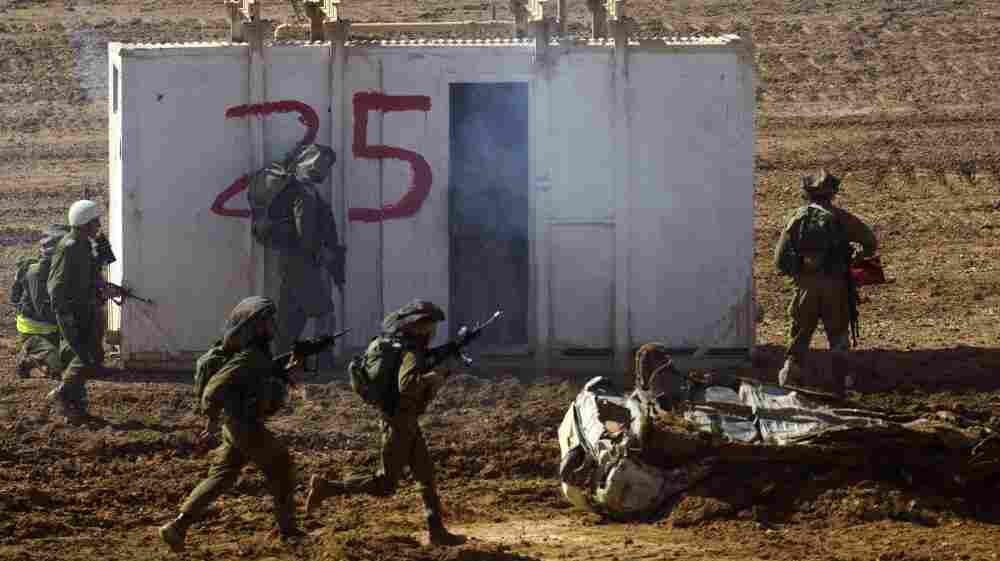 Israeli soldiers take part in an exercise at the Shizafon army base, in the Negev Desert north of the southern city of Eilat, on Tuesday. There are growing signs that Israel may be planning a strike against Iran's nuclear facilities. Jack Guez/AFP/Getty Images hide caption 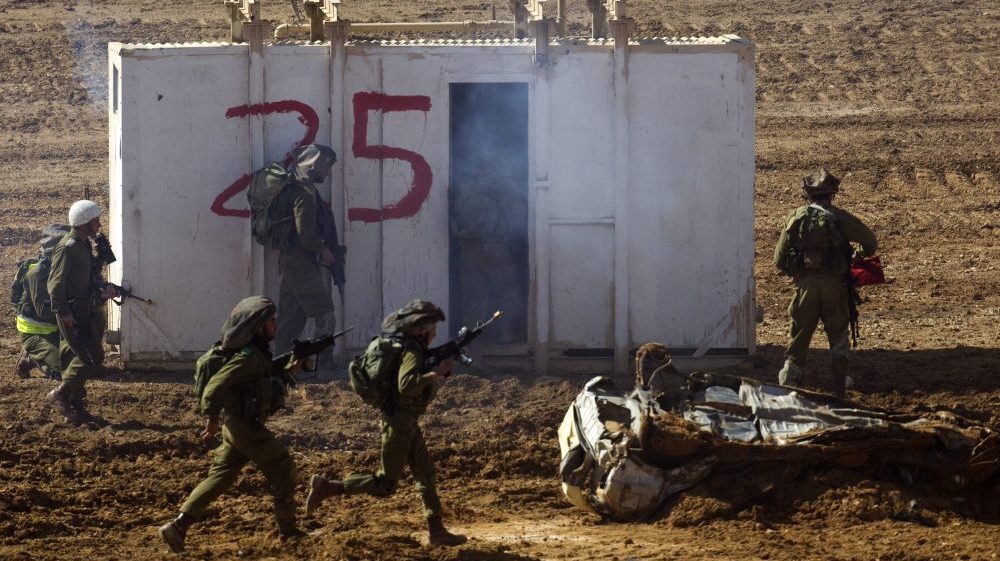 Israeli soldiers take part in an exercise at the Shizafon army base, in the Negev Desert north of the southern city of Eilat, on Tuesday. There are growing signs that Israel may be planning a strike against Iran's nuclear facilities.

Israel believes that Iran is working to build a nuclear bomb, and dismisses Iran's assertion that its nuclear program is solely for civilian purposes.

While Director of National Intelligence James Clapper declined to make his assessment public, he did say that "Iran has the scientific, technical and industrial capacity to eventually produce nuclear weapons, making the central issue its political will to do so." 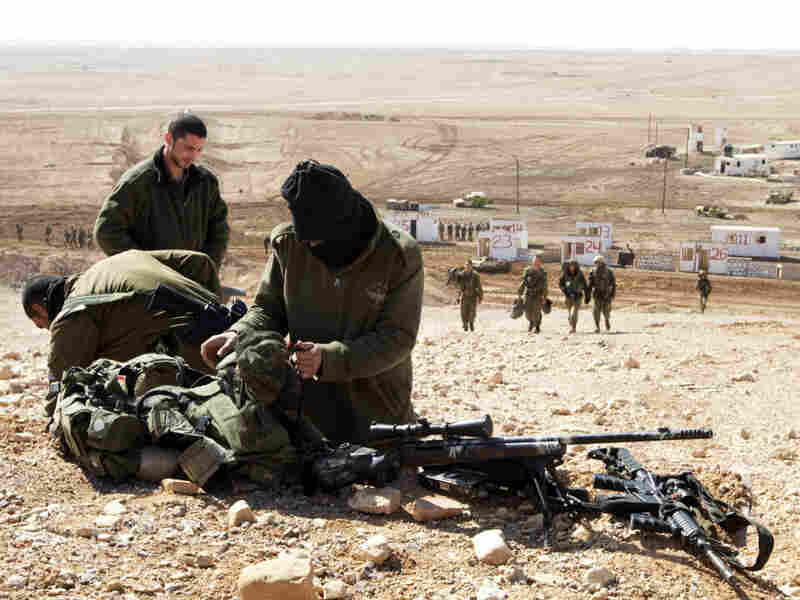 Israeli army snipers pack their gear after an army exercise at the Shizafon army base, in the Negev Desert north of the southern city of Eilat, on Tuesday. Jack Guez/AFP/Getty Images hide caption 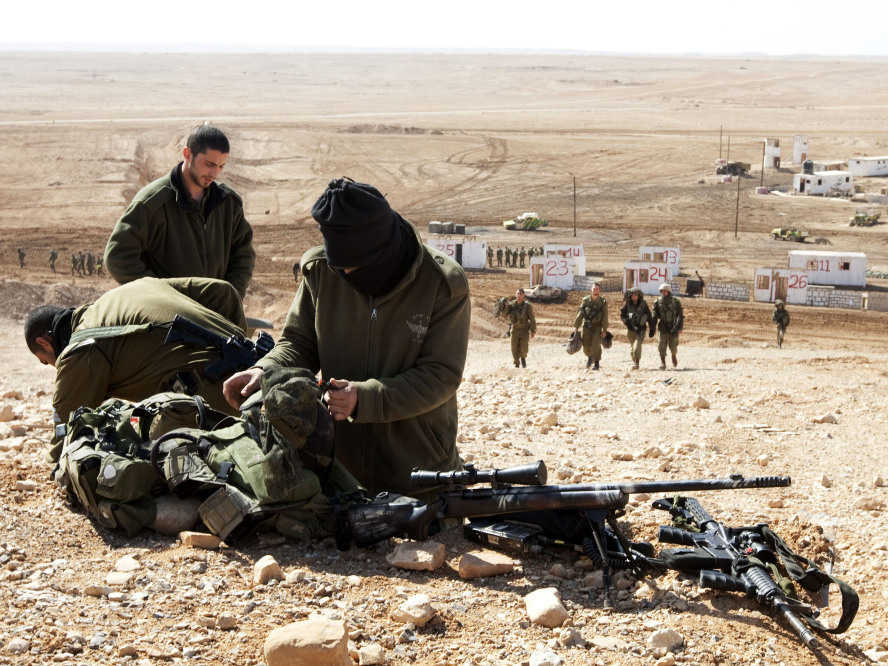 Israeli army snipers pack their gear after an army exercise at the Shizafon army base, in the Negev Desert north of the southern city of Eilat, on Tuesday.

That echoes an earlier American estimate that Iran could cross the nuclear threshold this year.

The United States and the European Union have agreed on tough new sanctions against Iran's oil industry and central bank, aimed at curbing Tehran's nuclear ambitions.

Those moves were welcomed in Israel as a sign that the international community was taking the Iranian nuclear threat seriously.

But still, the general feeling in Israel is that sanctions aren't enough.

"The reason I'm skeptical about [sanctions] is that for the Iranians, the idea of getting a nuclear weapon is so important that even if these sanctions are causing them a lot of trouble, they would still be more inclined to continue the project in spite of the sanctions," says Kuperwasser.

"They are getting closer and closer. They build better and better capability to produce a nuclear weapon. And once they have the capability, it is becoming more difficult to stop them before they turn this capability into a reality and have the weapon," he says.

In recent days, there has been a flurry of high-level meetings between the U.S. and Israel — including a visit to Washington last week by the head of Israel's intelligence agency, Mossad.

Some analysts in Israel believe that Israel that is preparing to attack Iran's nuclear facilities soon.

Ronen Bergman, one of Israel's foremost military experts, says there is "a high probability" that Israel might strike Iran in 2012." His prediction appeared in the Jan. 30 New York Times Magazine.

Others disagree with him and say Israel is using the threat of an attack to push the international community toward tougher sanctions and to galvanize a reluctant America into action.

They also question whether Israel actually has the capability to inflict serious damage. Analysts and military officials say Iran has been moving some of its critical nuclear facilities deep underground. And not only are Iran's installations protected, they are also scattered around the country.

But Bergman says the objective of an Israeli strike is limited in scope.

"According to the Israeli assessment, a successful strike, a strike that would be conducted according to planning, would be able not to destroy the project — nobody thinks that Israel is able to destroy it, even not the Americans, but to inflict a significant damage that would end with a delay of three to five years," says Bergman.

Threat Of War As Deterrent

And that has led some to go beyond the questions of "will they or won't they?" and "can they?" to "should they?"

Meir Javedanfar, an Iran analyst in Tel Aviv, says that most reports he's seen say that an attack would only set the Iranian nuclear program back two to three years.

"A military strike would rally people around the program, reluctantly even, in some cases," he says. "And it would push the regime to rebuild its nuclear program. It means that Israel may have to keep bombing Iran every three years. Is this the scenario that we want to live?"

Israel has already bombed the nuclear facilities of two countries: Syria and Iraq. Neither government retaliated.

But Bergman says there are several doomsday scenarios if Israel goes to war with Iran.

"A rain of rockets from Hezbollah in the north, Iran and Hamas in the south, that the Israeli population is not really protected against," he says.

And that, Bergman says, more than anything, may stay Israel's hand. He says despite all the recent drills preparing the Israeli population for possible attack, the country isn't psychologically prepared for what a war with Iran could unleash.

"If it wasn't for this consideration," Bergman says, "Israel would have attacked long ago."