Accessibility links
New Silica Rules Languish In Regulatory Black Hole Last year it looked like stricter controls would be put in place to limit workers' exposure to dangerous silica dust. But for almost a year, the proposed regulations have been stalled at the White House Office of Management and Budget. Worker safety advocates are growing frustrated, but industry stakeholders say current regulations are sufficient. 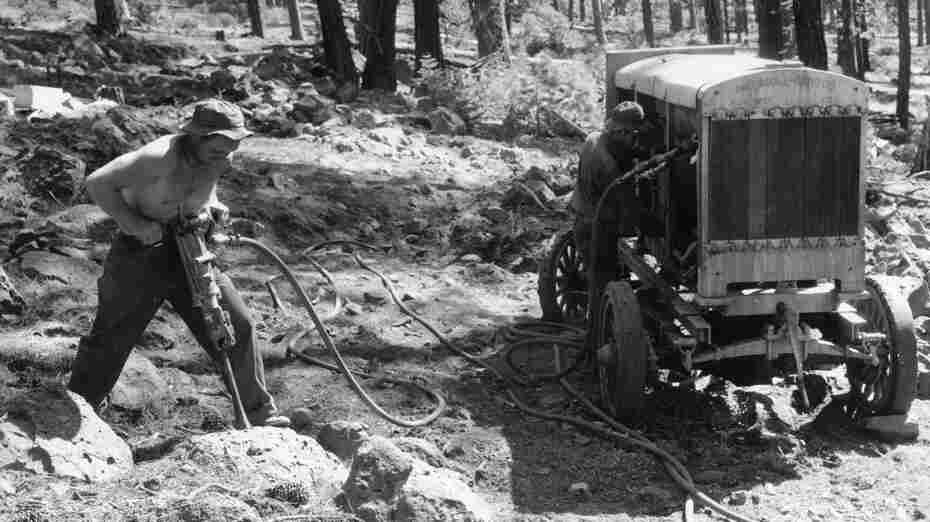 Controlling dust from activities like this was on the minds of those in the Department of Labor in the 1930s, as silicosis, a lung disease, was taking a toll on American workers. Above, a worker jackhammers into rock in Lassen National Forest in California in 1934, preparing to shoot explosives. U.S. Forest Service/Oregon State University Libraries hide caption

Any job that involves breaking up rock or concrete or brick can potentially expose workers to dangerous silica dust, and last year it looked like the Department of Labor's Occupational Safety and Health Administration was about to put stricter controls in place to limit this health hazard.

But for almost a year, the proposed regulations have been stalled at the White House Office of Management and Budget. Worker safety advocates are growing increasingly frustrated. They say instead of having a public debate, officials are meeting behind closed doors with industry stakeholders who want to stop new rules.

Breathing tiny particles of silica, which is basically sand, can damage the lungs and cause silicosis. Sufferers can't get enough oxygen; they become weak. There's no cure.

Workers can encounter silica dust while doing all kinds of jobs, from mining to manufacturing to construction. Experts estimate that there's thousands of new silicosis cases each year, and hundreds of deaths. Silica has also been linked to other diseases like lung cancer.

"It's almost unbelievable that we have allowed something like this to go on for so long, without an effective means of controlling it," says Tee Guidotti, a physician in Washington, D.C., who specializes in occupational health.

The government does limit the amount of silica workers can be exposed to, he says, but that exposure limit dates to the 1960s. Guidotti says a safe limit would be half of what's currently allowed.

So he was pleased when, last Valentine's Day, the Department of Labor sent the OMB a new proposal for regulating silica. That office has to review the proposal before it is made public, and that review was supposed to take only 90 days.

It's almost unbelievable that we have allowed something like this to go on for so long, without an effective means of controlling it.

As the one-year anniversary approaches, many safety advocates wonder what's holding things up. Records show that officials have held nine private meetings on the issue.

Guidotti went to one, which was requested by a medical group, the American Thoracic Society. He says officials didn't ask too many questions. "But you could tell from what they did ask that they were very well-briefed," Guidotti says. "So they know about this. They know it well."

Most of the other meetings were with industry groups, like the American Chemistry Council's Crystalline Silica Panel.

Jackson Morrill, who heads this coalition of companies and industry associations, says they asked officials not to lower the level that workers can be exposed to. Morrill says the current level is adequate to protect worker health and safety, and that any changes could cost billions. In his view, the real problem is employers who ignore the current rules and the answer is better enforcement.

"I think that's the way forward and if we can reach universal compliance, it's certainly our hope that that would lead to an end to the silicosis issue," Morrill says.

One member of this coalition, the National Industrial Sand Association, also opposes lowering the current exposure limit but would support some new regulations.

Mark Ellis, the head of the association, says they argued for mandatory exposure monitoring and medical surveillance at certain silica levels — the kind of measures that his industry is already doing voluntarily.

"We have been using this program since 1977 and it's proved successful in virtually eliminating silicosis from our workforce," Ellis says.

Government officials also have heard concerns from representatives from the construction industry.

Robert Matuga, with the National Association of Home Builders, says construction sites shouldn't be regulated in the same way as mines or manufacturing plants because in construction, silica exposures can change from day to day.

"One of the things about the construction industry is that the job sites are constantly changing," he says. "The tasks and activities are really variable as the project progresses." 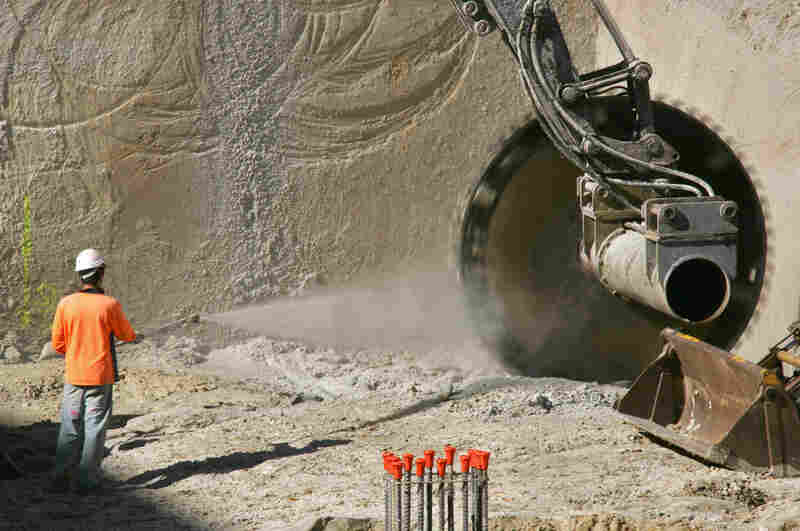 A worker sprays water onto a large circular saw as the machine cuts sandstone in Sydney, Australia, in 2005. Applying water can help reduce the amount of dust that makes it into the air. Bloomberg via Getty Images hide caption 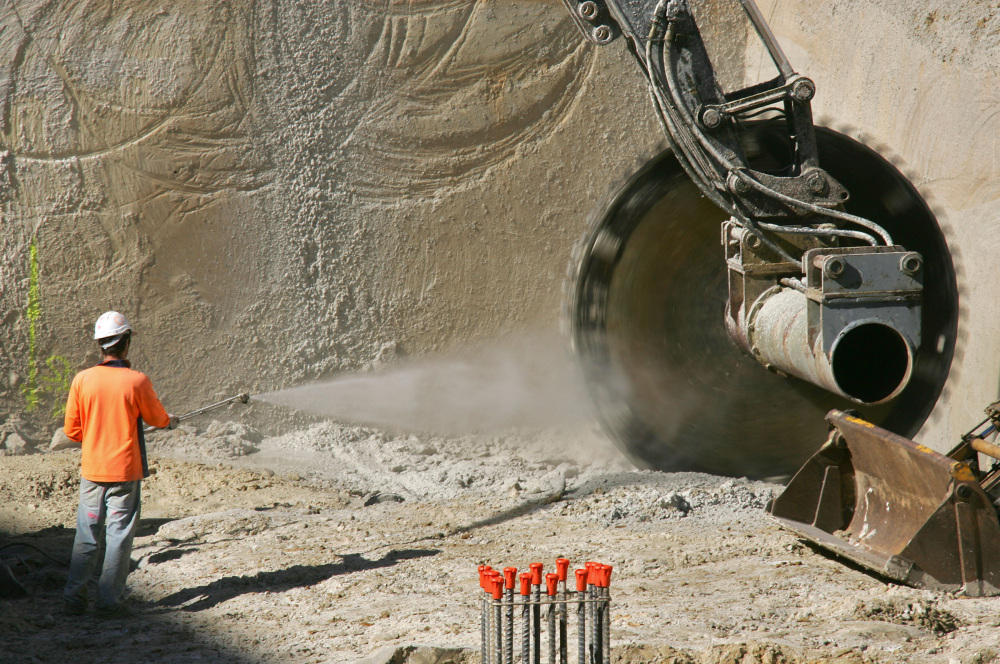 A worker sprays water onto a large circular saw as the machine cuts sandstone in Sydney, Australia, in 2005. Applying water can help reduce the amount of dust that makes it into the air.

But Scott Schneider, with the Laborers' Health and Safety Fund of North America, says there are plenty of studies showing how to control silica in common construction tasks. And he says there's a clear need to act: "You know, anyone that walks by a construction site, you can often see someone cutting concrete or cutting brick or block and huge clouds of dust coming from the saw."

Schneider attended one meeting with officials at the OMB that was requested by union groups and safety advocates so that they could express their dismay at the long delay.

Chris Trahan, with the Center for Construction Research and Training, was at that meeting as well, and she says their message was simple: Let the Department of Labor go public with its proposal and start a real debate, rather than holding discussions behind closed doors.

The National Advisory Committee on Occupational Safety and Health issued a statement in December saying it was "deeply distressed" that the proposed new regulations had been under review for so long.

"The current standard is many decades old and is insufficient to protect workers from this serious occupational health hazard," the advisory committee noted. "The silica rule delay is extraordinary and without explanation, and there is no indication as to when the review will be concluded."

We have been using this program since 1977 and it's proved successful in virtually eliminating silicosis from our workforce.

Those concerns were echoed by Steven Fess, who serves as the chairman of the construction committee for the American Industrial Hygiene Association.

"American construction workers shouldn't have to rely on 35-year-old science for protection," says Fess. "The standard is out of date, and OSHA itself acknowledges that the standard is obsolete."

An OMB spokeswoman said the office doesn't comment on regulations under review, but it's not uncommon for reviews to be extended. She said the office grants meetings to all parties and individuals who request them.

A Labor Department spokesman said that OSHA was working with the White House office "to address complex issues related to the costs, benefits and economic impact analyses." This has required "extensive new analyses by OSHA" and additional review, he said, but OSHA would "continue to complete the required steps in the rule-making process as quickly as possible."