Accessibility links
Romney Leads Gingrich In Money; Obama Bests Both Newt Gingrich had his best fundraising of the campaign in the final months of last year — but so did rival Mitt Romney, whose disclosure reports showed he raised more than twice as much. As for Obama, his campaign showed that incumbency still has its advantages. 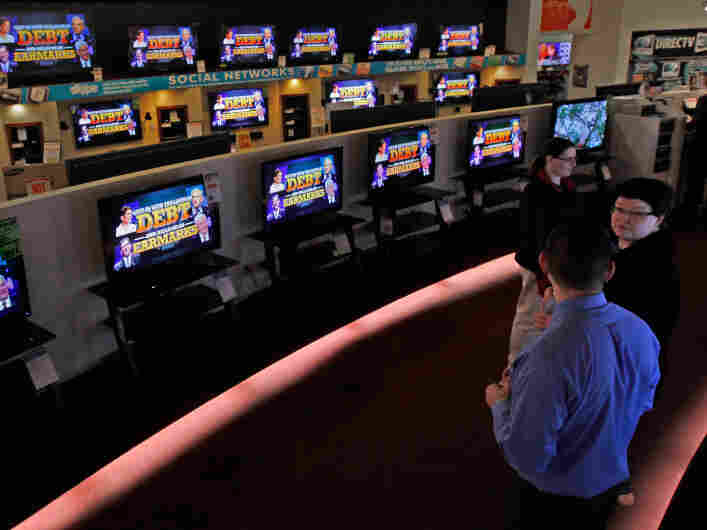 Millions of dollars have been spent on television ads during this campaign cycle. Chip Somodevilla/Getty Images hide caption 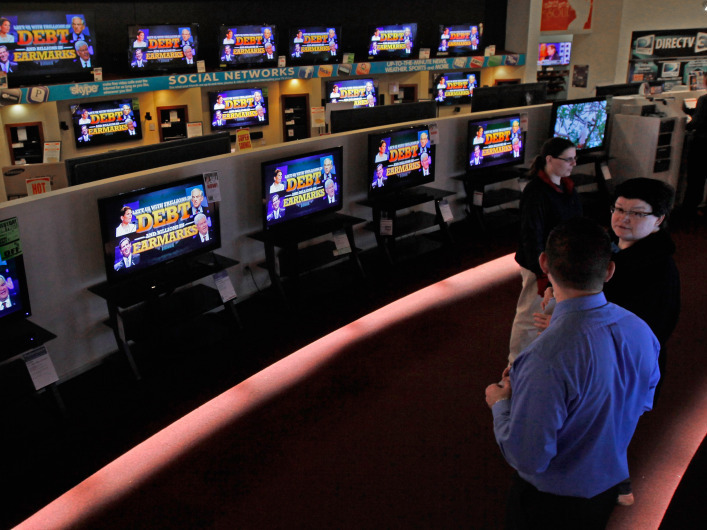 Millions of dollars have been spent on television ads during this campaign cycle.

As the Republican candidates were rallying their supporters in Florida on Tuesday night, their campaigns were quietly sending disclosure reports to the Federal Election Commission in Washington. The big picture: Mitt Romney had more money than Newt Gingrich. President Obama had more than either of them. And a few of the new superPACs filed donor lists filled with high rollers.

Tuesday's disclosures run only through Dec. 31 but still reveal some essential truths.

In the last quarter of 2011, Gingrich's campaign had its best fundraising of the year. But so did Romney's.

The former U.S. House speaker had $2 million cash on hand on New Year's Day. The former Massachusetts governor had nearly 10 times that, thanks to a donor network in which 66 percent of the money came from people who could write checks for the legal maximum: $2,500.

Romney's fundraising is likely to accelerate from here, says Sheila Krumholz, executive director of the Center for Responsive Politics, which tracks political money. "With this showing in Florida, naturally this early money begets money and will likely continue that success."

Indeed, at 9 p.m. Tuesday, Romney's campaign started pitching a One Term Fund online with a goal of $1 million.

Speaking to supporters in Florida, Gingrich summoned up the Gettysburg Address and Abraham Lincoln, "who said we have government of the people, by the people, for the people.

"And we're going to have people power defeat money power in the next six months," Gingrich said.

Meanwhile, Obama's campaign raised $40 million in the quarter. That's down from the previous quarter's report, but still enough to leave a bank balance of $81 million. And that balance was about twice the combined total raised in the fourth quarter by Romney, Gingrich and their two remaining Republican rivals — former Sen. Rick Santorum of Pennsylvania and Rep. Ron Paul of Texas.

The Obama campaign got just 9 percent of its money from maxed-out donors, and 43 percent came from donors who gave $200 or less. The pace is ahead of the first Obama campaign. And if it remains on the trajectory, it would come close to $1 billion by Election Day.

"I'm not sure how important it is to meet the $1 billion mark," says Krumholz. "There's so much more action and serious money being driven by superPACs and ... ultimately, by their nonprofit counterparts in this election."

This is the first presidential election with superPACs, which sprang up after the Supreme Court's Citizens United ruling and some other legal decisions opened the door wider for unlimited contributions.

There are superPACs running alongside all the presidential campaigns. The one backing Romney is the most prosperous. It reported raising $18 million.

Forty corporations and other businesses gave money, and three financiers gave $1 million each.

Last month, the pro-Gingrich superPAC started to catch up — with $10 million coming from a casino billionaire and his wife. But the report filed Tuesday night showed that before that happened, the superPAC had collected only $2 million.

That's about the same level as the pro-Obama superPAC. It reported receipts of just over $1 million, with most of it coming from one source: the Service Employees International Union.

Krumholz says the lists of big donors look a lot like they did in the 1990s — back when it was legal to give unlimited "soft money" contributions to the party committees.

"These are the folks with the money, as well as people who clearly want to be kind of at the head of the pack," she says.

Congress cut off soft money for the party committees in 2002. A decade later, it seems soft money has found a new home.