Accessibility links
Occupy Movement Has Captured The Nation's Attention, If Not Its Cities Most of the Occupy Wall Street protesters have gone home, but they have left a cultural and political legacy that will likely shape the debate about economic fairness in America for some time to come — and have a direct impact on the 2012 elections.

Occupying The Nation's Attention, If Not Its Cities

Occupying The Nation's Attention, If Not Its Cities 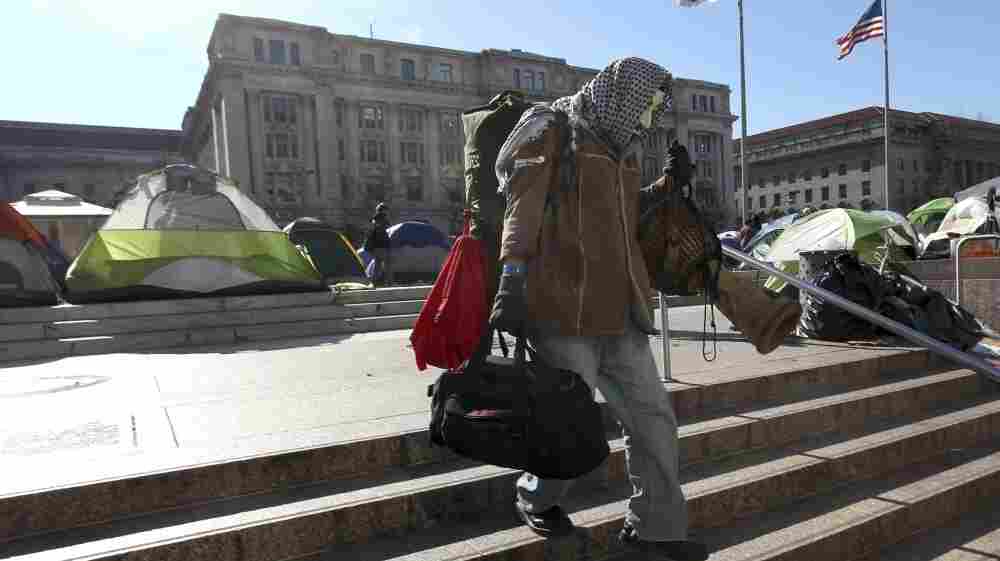 A protester at the Occupy D.C. encampment in Freedom Plaza packed up his belongings Monday ahead of a National Park Service deadline to clear out. Win McNamee/Getty Images hide caption

Most of the tents are gone, the parks are empty and nearly 99 percent of Occupy Wall Street's 99 percenters have gone home.

But even as the occupation enters a denouement, the nationwide movement sparked in September can claim a huge victory in the battle of ideas. Occupy has spoken, and Americans have listened.

Subjects that were largely taboo on Wall Street, Main Street and Pennsylvania Avenue just six months ago have moved to center stage. Higher taxes on the wealthiest Americans. Capping the cost of higher education. Corporate greed.

It's difficult to imagine, even a few years ago, that politicians on both sides of the aisle would be talking about inequality in the United States.

"There's a better than reasonable chance that we are at this turning point in American life and American politics," says David Meyer, a sociology professor at the University of California, Irvine, and author of the book The Politics of Protest: Social Movements in America.

Nationwide, the familiar tent cities have mostly vanished — with protesters either leaving of their own accord or being forced out by police — and rallies that once attracted tens of thousands of people now draw hundreds.

New York City's Zuccotti Park, where the movement began, is quiet. Even in Oakland, Calif., where 400 Occupy protesters were arrested earlier this week, crowds have shrunk to perhaps a few thousand from the 50,000 that demonstrators claimed in October.

Even though its physical presence has dwindled, Occupy's message is likely to help shape the debate on fairness in America for some time to come, and have a direct impact on the 2012 presidential election.

President Obama obliquely referred to the Occupy movement in last week's State of the Union address when he talked about the need for economic fairness and the "98 percent of American families" who make less than $250,000 a year. In the Republican response, Indiana Gov. Mitch Daniels said the United States could not be "a nation of haves and have-nots; we must always be a nation of haves and soon-to-haves."

Such sentiments existed before Occupy, but the protests crystallized them, says Deana Rohlinger, sociology professor at Florida State University in Tallahassee.

Americans And The Wealth Gap

A recent survey of 2,048 adults found a substantial increase since 2009 in the number of people who believe there are "very strong" or "strong" conflicts between the rich and the poor.

"It's difficult to imagine, even a few years ago, that politicians on both sides of the aisle would be talking about inequality in the United States," she says. "In terms of shaping the political discourse, this has had a huge effect."

Politicians are simply channeling a greater awareness of these issues, according to Dannagal Young, a professor at the University of Delaware's Center for Political Communication who has been researching how the public perceives the Occupy Wall Street movement.

While there's a pretty even split on whether the protests are perceived as a good or bad thing, "a large proportion [of people] ... know a lot about what Occupy Wall Street is all about," she says.

A Pew Research Center survey published earlier this month found that about two-thirds of Americans believe there are "strong" to "very strong" conflicts between rich and poor, up from less than half two years ago.

Young says that for all the talk about Occupy Wall Street protesters being gangs of anarchist youths, they have filled a very mainstream function in the public discourse. "They've caused a national conversation about wealth and political clout," she says. "If you are working within a representative democracy, that is the first step."

That conversation has resonated in some unlikely places. Republicans, who have excoriated Obama for fomenting what they see as "class warfare," now find themselves debating issues of wealth in their own primaries. Front-running multimillionaire Mitt Romney has had to defend himself against what he called "the politics of envy."

The shift in the dialogue on inequality might be broader than the political moment, observers agree. There's a long tradition in the U.S. of the two main parties absorbing big ideas that started out on the fringes of politics.

"What savvy politicians do is they appropriate these ideas for their own purposes," Rohlinger says.

Meyer, of UC Irvine, notes that successful movements strengthen the spine of politicians disposed to agree with them. "They give incentives for being a little bolder and a little more aggressive in pursuing policies that [those politicians] probably want to pursue anyway," he says.

The movement has even spawned its first national political candidate: Politico reported last week that Nathan Kleinman, a 29-year-old member of Occupy Philadelphia, is planning to run for Congress in Pennsylvania's 13th District against the Democratic incumbent.

But Meyer says a foray into politics could be precarious for Occupy, as it has been for the Tea Party.

"As the Tea Party has gotten involved almost exclusively in electoral politics, it's not as visible," he says. "And what are the chances that the Republican Party will nominate a candidate that looks remotely like what the Tea Party is? Miniscule."

Occupy's message also may have staying power because it has managed to galvanize a once-famously apathetic American youth.

While the movement's demographic is far broader than disaffected 20-somethings, Young of the University of Delaware thinks Occupy has likely had the biggest impact on that constituency.

"Suddenly, they see that politics is not just a spectator sport, it isn't just something that happens in the black box in my living room," she says. "For the first time, it's pulled them into the national discussion."

Romney's Line That He's 'Not Concerned About Very Poor' Will Linger Feb. 1, 2012