Accessibility links
How Much English Is Enough To Hold Office? An Arizona judge has deemed Alejandrina Cabrera's English language skills to be inadequate, and has struck her name from the ballot for the San Luis, Ariz., City Council.

A county court barred Alejandrina Cabrera from running for city council last week, claiming she lacked the English language skills necessary for the job. She's since filed an appeal and hopes to get back in the race before ballots are printed on Feb. 7. Courtesy KSWT News 13 hide caption 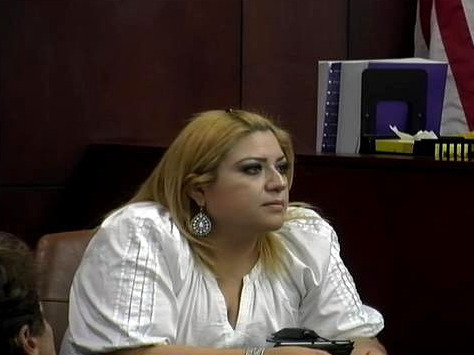 A county court barred Alejandrina Cabrera from running for city council last week, claiming she lacked the English language skills necessary for the job. She's since filed an appeal and hopes to get back in the race before ballots are printed on Feb. 7.

A woman who was barred by a judge from running for a City Council seat in San Luis, Ariz., last week because she lacked English-language skills has filed an appeal. Alejandrina Cabrera is hoping to get her name back on the ballot claiming her language abilities are sufficient to represent residents of the largely bilingual border town.

"It's not perfect," Cabrera said of her English at a recent press conference. "But it's perfect for this position in San Luis, Ariz., because the people speak both language, but the people prefer Spanish."

The case stems from a nearly century-old Arizona state statute that disqualifies "a person who is unable to speak, write and read the English language" from public office.

Cabrera's legal team has argued that she is able to speak, write and read in English — and without official criteria around language proficiency, her level of English should not prevent her from seeking public office any more than her race or IQ.

"How can you say that somebody flunked a test when you never said what the minimum grade was to pass it?" John Garcia, one of Cabrera's lawyers, said following the court ruling.

Garcia took issue with William Eggington, who was brought in by the court to test his client's English skills. He claimed that the sociolinguist's Australian accent was hard for Cabrera to understand and may have had something to do with his determination that her English abilities were below the level needed to serve on the City Council.

Cabrera's trial has been a controversial one, not only because of the fraught role of Spanish in American society, but because it was brought by Juan Carlos Escamilla, the mayor of San Luis, against whom Cabrera, a community activist, has led two unsuccessful recall campaigns.

"I've always believed nobody is above the law," Escamilla told Michel Martin, host of NPR's Tell Me More. "And I strongly believe that the citizens of San Luis deserve a representative to be able to speak to them."

Escamilla concedes that Spanish is the language of most interactions in the city. Many of the public comments at City Council meetings are presented in Spanish, but the mayor says that the duties of council members extend beyond San Luis.

"We are a border town," Escamilla says. "A lot of the issues that we face cannot be fixed within our city limits. We need to be able to advocate those concerns at a higher level and all that is conducted in English."

Alejandrina Cabrera's attorneys have said they want the matter to be settled before ballots are printed on Feb. 7.