Accessibility links
Zynga CEO Wants To Bring Playtime To The Masses Mark Pincus' company is the maker of FarmVille and other games played on Facebook. He's worth $1.3 billion, and he may see that number grow if he meets his goal: to expand the universe of digital game players from sci-fi geeks to soccer moms and their kids. 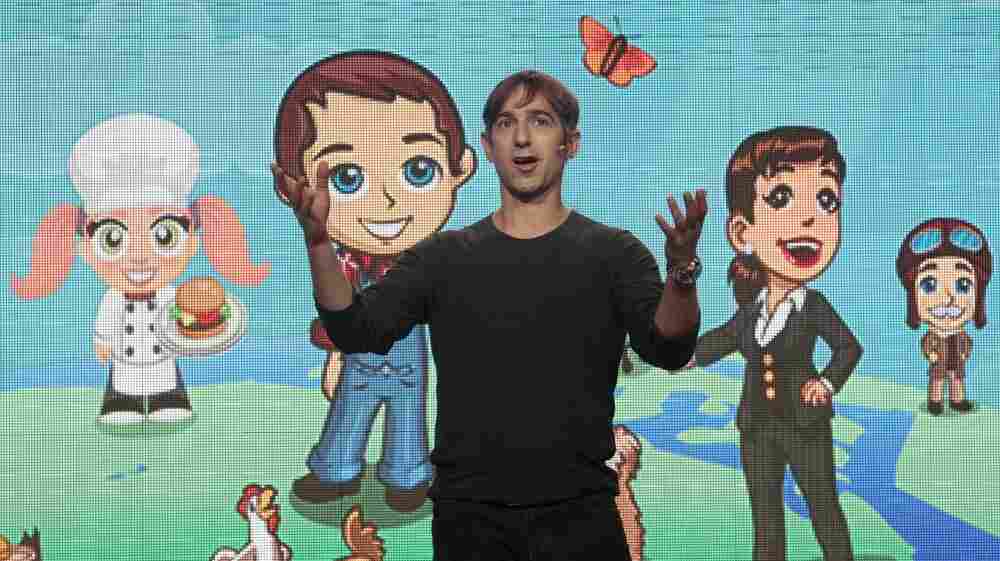 Ever harvested crops on FarmVille or laid down a triple-point Q on the Scrabble knockoff Words With Friends? Then you've spent time with Zynga, the largest maker of Facebook games.

Armed with cash and a massive database of user habits, Zynga's CEO Mark Pincus wants to expand the universe of digital game players from sci-fi geeks to soccer moms and their kids.

"When you think of these verbs that make up our Internet experience, there's not many of them," he says. "There's shop, there's search, there's share. I said I think that play can be one of these fundamental things that we do for the rest of our lives."

Even on an airplane when a flight attendant says not to. In December, Alec Baldwin got kicked off American Airlines for playing Words With Friends on his cellphone. Baldwin joked about it later during a Saturday Night Live parody of the incident. The flap moved online games from subculture to pop culture, and Atlanta's airport called Pincus about installing Zynga games in its terminals.

In the lobby of Zynga Inc., a Winnebago — dubbed a Zyngabego — sits at the foot of a neon pink tunnel. On the other side, there are six floors of cafes, doggy daycare and studios — one studio per game.

Founded in 2007, Zynga has more than 2,700 employees. No company in Silicon Valley has added workers that fast, according to industry watchers. 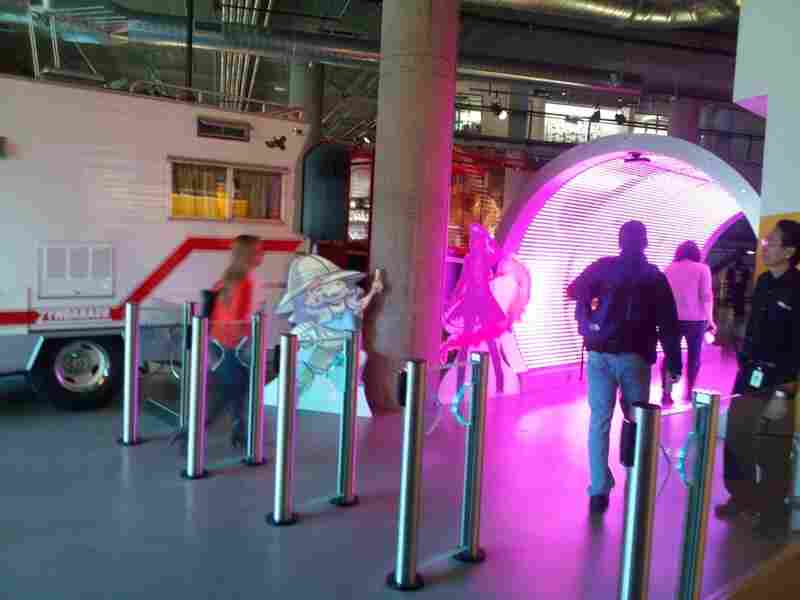 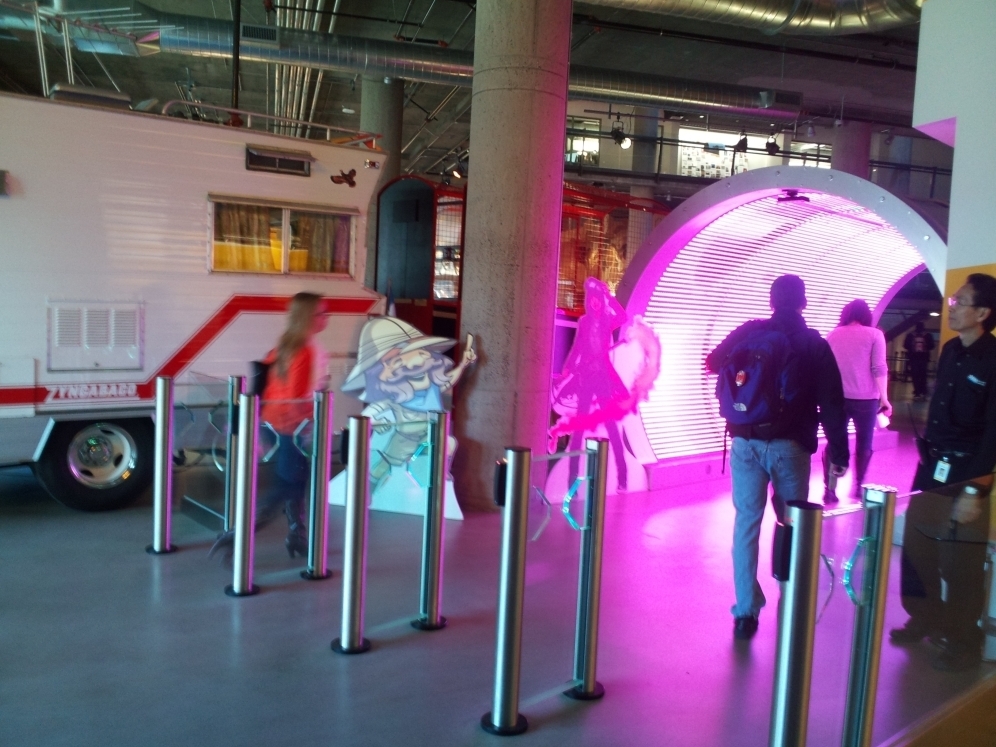 Workers pass the "Zyngabego" — an old-school motor home — to cross the neon tunnel and enter the futuristic studios of the online gaming company.

In a closed-door meeting about an undisclosed game, Pincus pushes a few of his employees to think like a CEO: "I've got to believe that there is something more compelling that we can do with that network effect."

Pincus' superpower is data. Zynga tracks the usual demographics, plus keystrokes, mouse clicks and idle time. According to a recent prospectus, the company collects 15 terabytes a day — a volume equal to 5 million copies of War and Peace.

Zynga's engineers work at lightning speed to turn player feedback into whiz-bangy features — like getting cows to move their heads in the mega-hit FarmVille.

That feature was created for pure joy. Others are designed to increase player interaction and thereby strengthen the network of game players. Take the bridge in CityVille. Last June, players demanded a way to expand their properties across the river. Developers created a "bridge" that requires the help of friends to build. In one day, more than 1 million players responded to each other's calls.

Here, the top 10 app developers and their monthly average users. So far, Zynga has managed to pull way ahead of its competition.

"I want people to think that when they're playing our games, they're touching something magical," says lead engineer Kostadis Roussos. "That's what I want. And I think that's what Pincus wants."

Pincus, 45, grew up in Chicago, watching his dad make up new rules for Trivial Pursuit and Charades. Now, he makes money by changing the rules in the game industry.

When Facebook opened its platform, Pincus saw a unique opportunity to become the game developer on the social network. He churned out free games. No Xbox or disk or assembly required — just an Internet connection.

On a recent afternoon, the Zynga chief demos the word game Scramble with Friends on his iPhone. A robotic voice shouts "excellent" when he manages to get a five-letter word. Pincus admits, "I'm not the best speller."

He is, however, excellent at counting. Pincus makes money by getting a small percentage of players to exchange real dollars for virtual currency. Twenty dollars — or 200 CityVille dollars — buys an imaginary skyscraper. Virtual goods are a $9 billion industry, according to Zynga.

The business depends on players getting addicted — waking up at 3 a.m. to collect CityVille rent, for example. Critics call Zynga games the crack cocaine of the Internet.

Pincus counters, "There's a fine line between calling it crack cocaine and calling it awesome, great entertainment. The last people we want to give a bad experience to are the people who are spending money. They're the ones who you want ... to shower with love."

Last December, the Nasdaq team joined Pincus in his lobby. Looking over the Zyngabego, they rang a virtual bell. And, at lightning speed, the stock price dropped. Shareholders — including the workforce paid in stock options — lost millions.

Months earlier, Pincus made more than $100 million by selling off shares to private investors at a higher price than the public got. 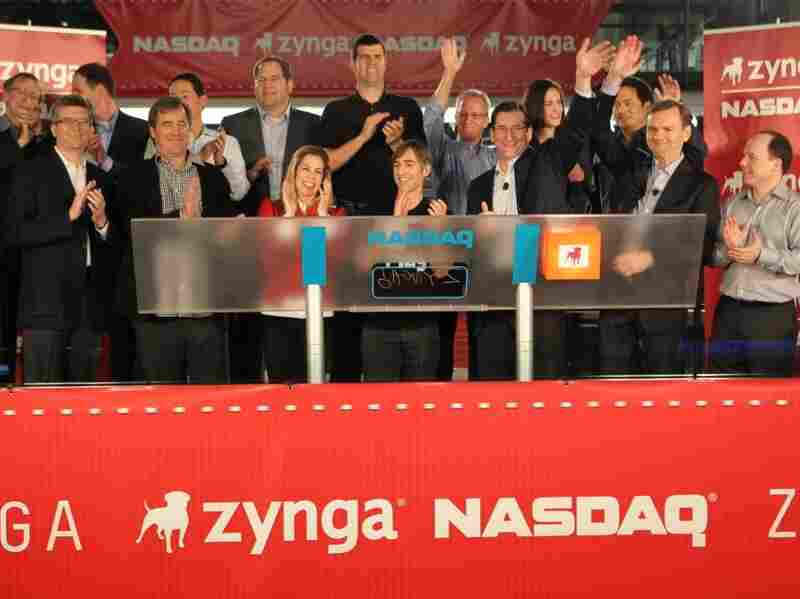 Zynga went public in December 2011. Mark Pincus (center) and his wife Ali Pincus (left), surrounded by Nasdaq and Zynga staff. The stock price fell on opening day. It was a bust, and has raised questions about the company's real value. Zynga/Zynga hide caption 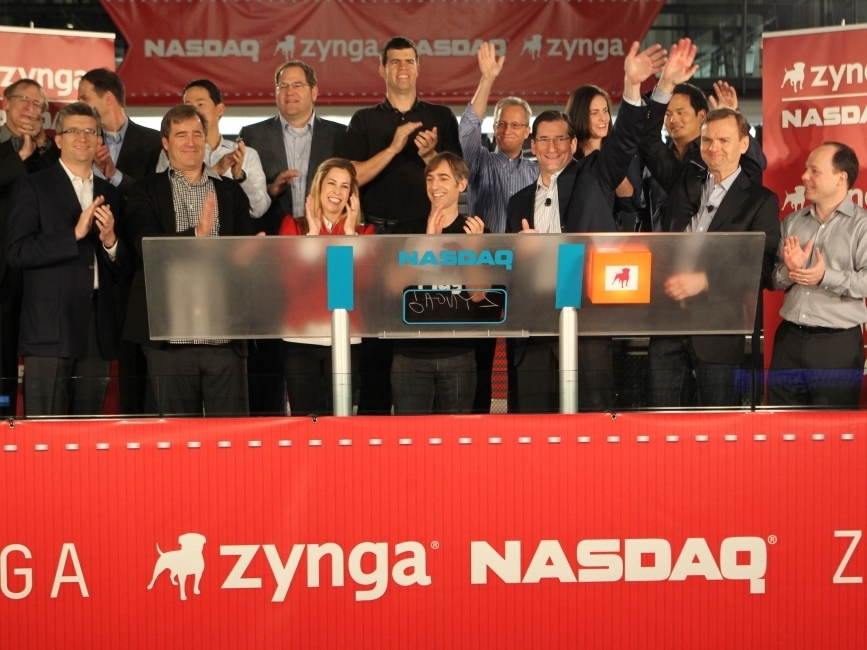 Zynga went public in December 2011. Mark Pincus (center) and his wife Ali Pincus (left), surrounded by Nasdaq and Zynga staff. The stock price fell on opening day. It was a bust, and has raised questions about the company's real value.

Vivek Wadhwa is a business professor at several schools, including Stanford University. He criticizes the move.

"When the CEO starts selling stock even before the company goes public at the rate Mark Pincus has, it sends a message to the employees that it's all about money," Wadhwa says. "This person doesn't believe in his own company."

Google went public when it was flush with cash. Facebook is doing the same. Pincus threw Zynga into the stock market when it was barely breaking even.

He says about his own style: "I've had a bad tendency to kind of throw myself under a bus. I'm learning about management and leadership every week."

In the coming months, players online and in the stock market will decide just how much Pincus has learned.