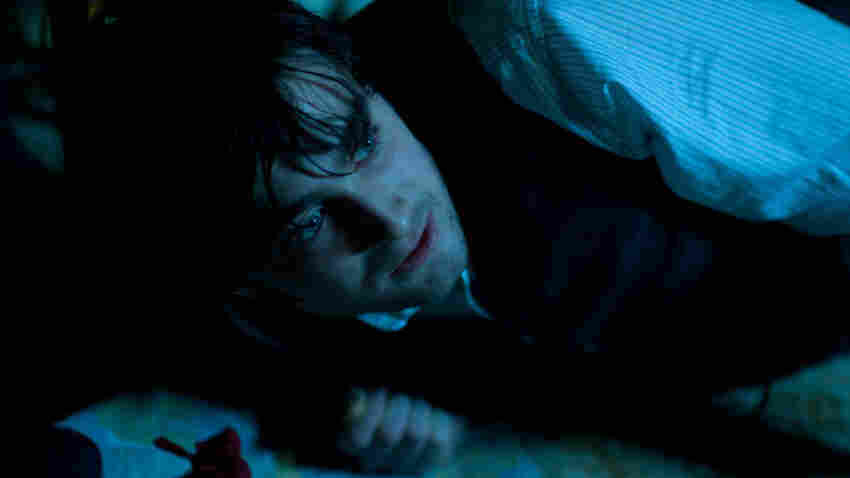 And Me Without My Wand: Solicitor Arthur Kipps (Daniel Radcliffe) battles demons within and without when he's sent to assess a ghost-plagued estate in The Woman in Black. Hammer Films hide caption

The Woman in Black

From 'The Woman in Black' - 'Monkeyshines'

Candles and cobwebs, cries from the marsh, fog machines on overdrive, a secluded manse stuffed to the rafters with eerily threatening Victoriana, and the Hammer Film Productions logo hovering over the credits — The Woman in Black has been tricked out with everything a cinematic ghost story needed.

And judging from the shrieks its haunted-house theatrics prompted from the Harry Potter fans who crammed a screening this week to see Daniel Radcliffe's first post-Hogwarts adventure, those basic requirements may not have changed all that much in the ensuing half-century.

Sure, horror-movie conventions have altered in the interim — gore and brutality increasing exponentially — but director James Watkins takes a more old-fashioned tack with The Woman in Black, tying it to the gothic Hammer tradition in which ghost stories were less about gruesomeness than about finding effective ways to say "Boo!"

He's found plenty: palm prints materializing on windowpanes, parrots whimpering on candle-lit staircases, crows erupting from fireplaces, cymbal-banging toy monkeys, and spectral children lurking behind every tree on the grounds of a magnificent gothic pile called Eel Marsh House. It's there that doleful young solicitor Arthur Kipps (Radcliffe), who lost his wife in childbirth and is so incapable of pulling himself together that he's in danger of losing both his job and the affections of his 4-year-old son, is sent by his law firm to sort out the estate of a woman who's recently died.

It turns out that more than the estate needs sorting. Locals talk of a child drowning in the marsh surrounding the manse, his mother dying while swearing vengeance, and a subsequently high fatality rate among local children.

With the townsfolk less than thrilled that Arthur's presence is now stirring things up, he's soon holed up in Eel Marsh House (which is separated from the mainland by a one-lane causeway rendered impassable with every high tide) reading papers by candlelight in an environment entirely composed of heavy drapes, looming furniture, dark nooks and creepy crannies. Much creaking of floorboards ensues.

This latest adaptation of Susan Hill's 1983 novel follows versions devised for the London stage (where one has been running continuously since 1989), for British radio, and for TV, with each incarnation finding ways to up the body count or otherwise goose the story into providing a few extra scares. Jane Goldman's screenplay strays from the original story in a number of respects, though generally in ways designed to tie Arthur more tightly into the tale of a tot-endangering, beyond-the-grave vendetta that stems from a parent's loss of her child.

Of course, for the movie's initial audiences, questions of life after death may prove secondary to questions of life after Potter. Though this role hardly constitutes a stretch for Radcliffe, who's spent a decade wide-eyed in alarm behind Harry's round glasses at one spectral presence or another, let it be said that he holds the screen well enough.

His empathetic Arthur looks a tad young to have a 4-year-old son, but decked out in sideburns, stubble and a period frock coat, he at least doesn't look like a wizard-in-training. And if nuanced line readings aren't yet Radcliffe's specialty, that hardly matters in a film that for much of its running time isolates him from his living, breathing cast mates so that he can plunge headlong through misty marshes, register alarm at locked doors that have inexplicably opened, and jump as things scrape, splinter, clang, screech, rasp and go bump in the night.