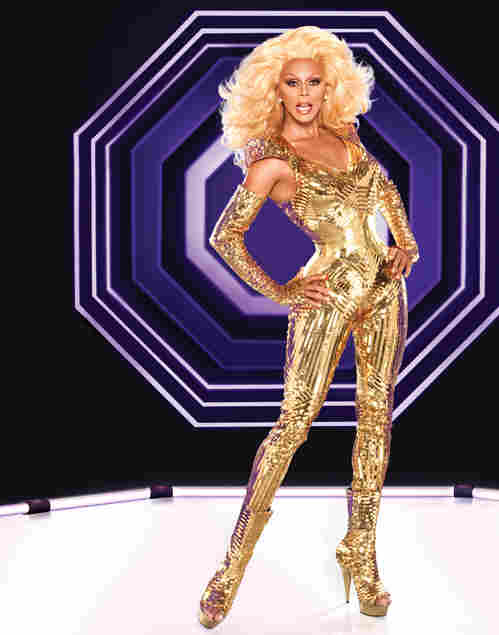 Legendary entertainer RuPaul has been famous for 20 years for his drag persona — sky-high wigs, even higher heels and glamorous dresses.

But even though he's known for his over-the-top outfits, RuPaul says that everyone is performing in drag, one way or another.

"I've had talk show hosts ask me, so why are you wearing women's clothes? And they, of course, are dressed in slacks, a blazer, and you know, a button-down shirt. And people don't get it. The truth is we're all doing it," he tells Tell Me More's Michel Martin.

And, by the way, RuPaul is his real name. Born RuPaul Andre Charles, his parents are from southern Louisiana, and he says his name has Creole flavor — "The 'Ru' is literally the roux in a gumbo."

He says his mother came up with his name with the intention that he would become a star. In the 1980s, he started performing in drag as part of a punk-rock band in Atlanta because it was "really, in our culture, the last taboo for boys."

RuPaul Plays Not My Job

Now, at 51, RuPaul says he still enjoys dressing up. He hosts RuPaul's Drag Race, the modeling competition for drag queens, which airs in 30 countries. RuPaul says the show, now in its fourth season, is an opportunity for people to "find out about a world they had no idea [about]. ... And it's not just, you know, sexual deviation. It has to do with using all of the materials that this planet has to offer."

The new season of RuPaul's Drag Race premiered Jan. 30 on Logo and earned the highest ratings for a premier on that network.