Accessibility links
Romney Again The Front-Runner, But At What Cost? Republican strategists say it's not clear yet whether the primary battle will help or hurt Mitt Romney if he becomes the nominee. He emerged from his win in Florida with both his strengths and his weaknesses on display. Plus, some Republicans worry that the race's negative tone will turn off voters. 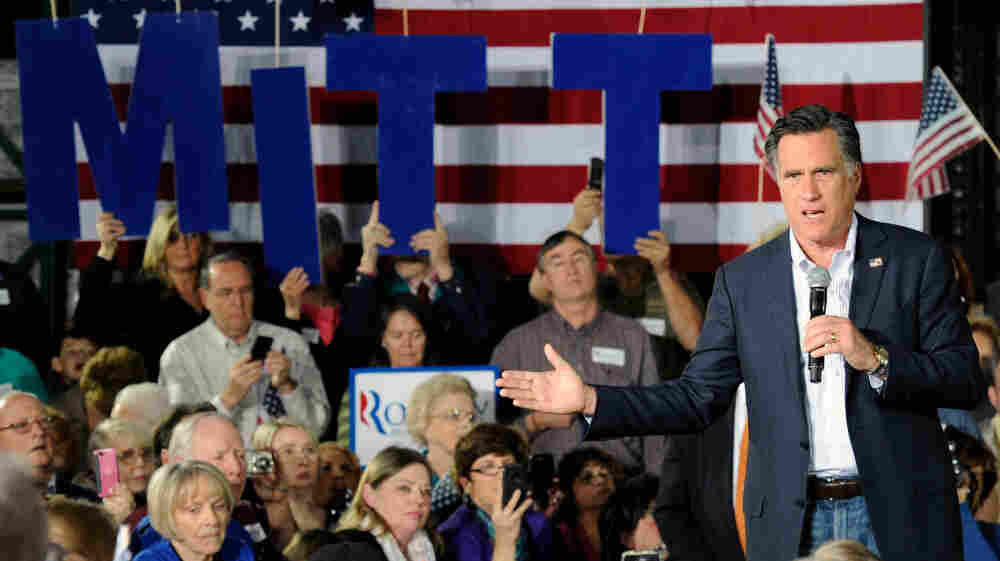 Former Massachusetts Gov. Mitt Romney's decisive win over former House Speaker Newt Gingrich in Florida returned him to the front-runner's spot in the Republican presidential race. Romney emerged from that battle with his strengths, but also his weaknesses, on full display.

Sometimes hard-fought nominating contests produce a more formidable general-election candidate. That's what happened to Barack Obama in 2008. But Dan Schnur, a former Republican strategist, says it's too soon to tell whether this Republican primary battle will have the same effect.

It's an open question at this point whether an ongoing Romney-Gingrich fight strengthens the eventual nominee or draws him further from the political center and makes it that much more difficult to run a competitive general-election campaign in the fall.

"It's an open question at this point whether an ongoing Romney-Gingrich fight strengthens the eventual nominee or draws him further from the political center and makes it that much more difficult to run a competitive general-election campaign in the fall," Schnur says.

'Damage Has Already Been Done'

Romney has been careful not to move too far to the right on most issues — with one glaring exception: immigration. Romney won big majorities of Republican Hispanics in Florida, but they were mostly Cuban and Puerto Rican.

Alfonso Aguilar of the Latino Partnership for Conservative Principles says Romney hurt his ability to appeal to Hispanic voters elsewhere with his opposition to the Dream Act and for suggesting all illegal immigrants self-deport.

"There are many Latinos who would consider voting for a Republican, for a conservative candidate, but who don't see those sorts of statements ... as something positive," Aguilar says. "I must say that if he is the nominee, damage has already been done ... and he has to realize that. ... And I frankly don't know what he's been thinking."

Aguilar's reaction is exactly what Democrats want to encourage among Hispanic voters. A Democratic superPAC is airing a Spanish-language radio ad in Nevada that says, "Mitt Romney has no shame. He shows one face to the Hispanic community and another completely different one to everyone else."

That's not the only way Democrats plan to take advantage of the vulnerabilities Romney has exposed on the campaign trail.

Bill Burton, who runs a pro-Obama superPAC, says Romney's unforced errors have given him a shelf full of material.

When you see this type of scorched-earth campaigning, you're really worried if your focus is beating President Obama.

Romney, known as a superdisciplined candidate, has made an awful lot of unforced errors — from this week's comment that he's not concerned about the very poor, to his awkward handling of his Swiss bank accounts, beachfront home and blind trusts.

Some Republicans worry less about Romney's wealth and gaffes than about the overwhelming negative turn in the Republican race. In Florida, Romney and his allies spent $15 million on ads. Only one was positive — a Spanish-language radio ad that aired just 15 times. The rest were attack ads eviscerating Gingrich.

"When you see this type of scorched-earth campaigning," says Steve Schmidt, who was John McCain's top strategist in 2008, "you're really worried if your focus is beating President Obama — because you worry about the unfavorable numbers being risen to high levels among independent voters across the country."

In the most recent ABC-Washington Post poll, Romney's favorable ratings with swing voters dropped 18 points, from 41 percent to just 23 percent. And there are signs that the enthusiasm of the Republican base might not be as strong as it was in 2010: Turnout among Republicans has been down in every contest this year.

"For all of the circling the wagons around Mitt Romney, there's a lot of concern behind the scenes, even among Republican establishment types, that he's not a terribly strong candidate," Kibbe says. "It's not as if people don't know who Mitt Romney is in Republican primary circles. So there's something wrong there."

Preparing For The Fall

For all of Romney's weaknesses, he also has formidable advantages. The Republican Party, the Romney campaign and its superPAC allies appear poised to raise more money than the president and his supporters. The political landscape this year favors a challenger: Obama is a vulnerable incumbent with approval ratings of less than 50 percent. Unemployment is expected to stay higher than 8 percent through Election Day, and in the past few weeks, Romney has become a more aggressive candidate and a much better debater.

"This strongly contested Republican primary has one significant benefit for Mitt Romney," Schnur says. "Going through this type of fire in the spring will make him a better and more well-prepared candidate for the fall."

By one measure, Romney looks like he's in very good shape for the fall campaign. In national and swing state polls, Romney and Obama are tied.