Accessibility links
Afghans View Peace Talks With Hope, Suspicion The surprise announcement that the U.S. and the Taliban could soon begin peace talks in Qatar may have increased the chances of a negotiated settlement in Afghanistan. But some Afghans wonder whether such talks are about stabilizing Afghanistan — or just helping U.S. troops leave. 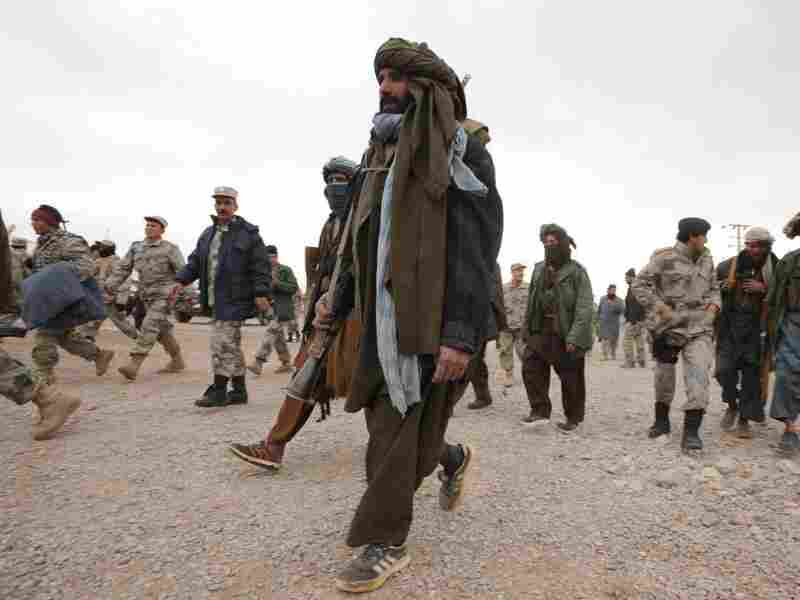 Taliban fighters walk with their weapons after joining Afghan government forces during a ceremony in Herat province, last month. Thirty fighters left the Taliban to join government forces in western Afghanistan. The Taliban announced recently that they would open a political office in Qatar ahead of talks with Washington. Aref Karimi/AFP/Getty Images hide caption 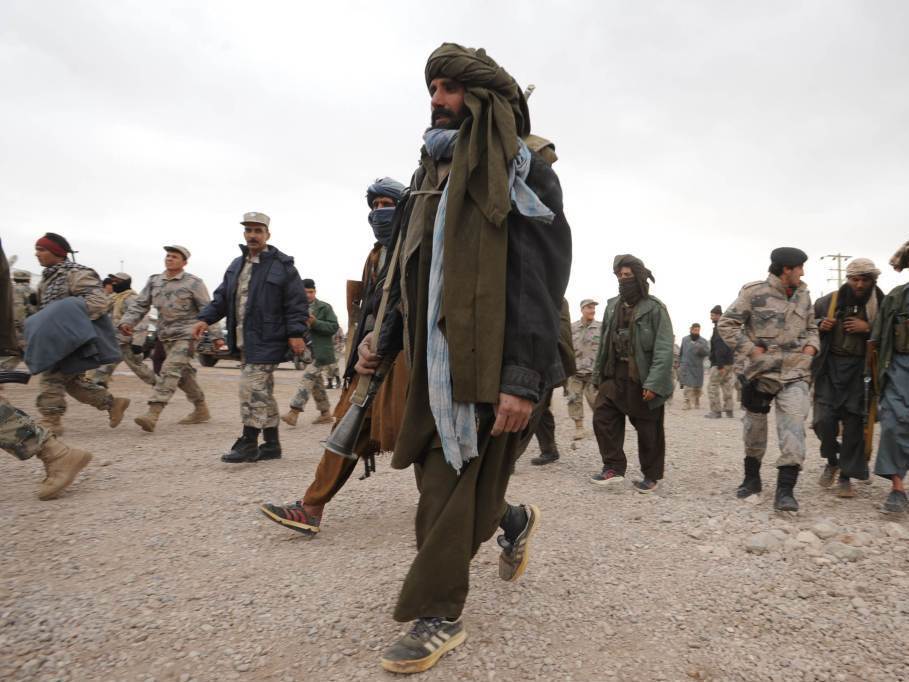 Taliban fighters walk with their weapons after joining Afghan government forces during a ceremony in Herat province, last month. Thirty fighters left the Taliban to join government forces in western Afghanistan. The Taliban announced recently that they would open a political office in Qatar ahead of talks with Washington.

The surprise announcement last month that the U.S. and the Taliban could soon begin peace talks in the Gulf state of Qatar may have increased the chances of a negotiated settlement in Afghanistan.

But Afghans are treating the prospect with equal measures of hope and suspicion — perhaps more of the latter from the government of President Hamid Karzai.

Coupled with Pentagon comments this week that U.S. troops might end combat operations a year early, some Afghans are beginning to wonder: Are talks with the Taliban about stabilizing Afghanistan, or just helping the Americans leave?

After lengthy discussions between the Taliban, the Americans, Qatar and Germany, the Taliban decided to open an office in Doha, the capital of Qatar.

What seemed like a breakthrough was not greeted warmly by Karzai. Afghan officials say they were deliberately bypassed in a concession to the Taliban, which has always refused to negotiate with what it labels the "puppet" Karzai government.

This week, Karzai announced he had his own initiative, and would be meeting Taliban leaders in Saudi Arabia. In another snub, the Taliban denied Karzai's claim in a phone interview Friday.

Reports that talks will start in Saudi Arabia are completely false, said Qari Yusef, one of the names used by regular Taliban spokesmen.

Yusef said the Taliban is in the process of reaching an understanding with the international community through confidence-building measures that haven't taken place yet.

He was referring to a possible exchange of prisoners, in which Taliban fighters held in Guantanamo Bay would be released into Qatari custody. There is speculation that the Taliban, in turn, would set free Sgt. Bowe Bergdahl, an American soldier held since June 2009.

The White House says releasing prisoners from Guantanamo would likely require congressional approval. It's also fairly clear that the process needs some sort of approval from neighboring Pakistan, which is believed to control the movement of most Taliban leaders. Pakistani Foreign Minister Hina Rabbani Khar made a rare visit to Kabul this week, and spoke to reporters at a news conference.

Khar denied longstanding charges that the Pakistani intelligence service is funding and supporting the Taliban. And while Pakistan is widely blamed in Kabul for keeping the insurgency going, some Afghans agreed with Khar's point that the Afghan government needs to be in the lead of any peace talks.

For Afghans, Uncertainty Ahead

Sami Sadat, a former official in the Afghan Interior Ministry, says so far, the process has not only left out Karzai, it has also ignored the Afghan public.

"It's a political process. Unfortunately, it doesn't have its basis in the hearts and minds of the Afghan population. The majority of the Afghans feel it's a kind of a deal for the Americans to find their way out of Afghanistan," Sadat says.

He says a peace deal must not allow the Taliban to threaten the gains Afghans have made in the past decade. Sadat's fears rose this week when U.S. Defense Secretary Leon Panetta remarked that the U.S. might transition from a combat role in Afghanistan by the middle of next year — a year sooner than previously expected.

Panetta later tried to clarify his remarks, but the Obama administration has yet to explain how quickly American troops will draw down from Afghanistan, and how many soldiers might stay on past 2014 as part of a strategic agreement with Kabul.

The uncertainty leaves Afghans hoping that some sort of peace plan can be worked out — and soon, says Sadat. Because if there's no peace deal by the time U.S. troops go, he says, the Afghans will be left once again at the mercy of the Taliban.