Accessibility links
Lost Malcolm X Speech Heard Again 50 Years Later Brown University senior Malcolm Burnley was working on a class assignment in the library archives last fall when he made a startling discovery: a forgotten speech that Malcolm X, the Muslim minister and human rights activist, had made to the university in 1961. 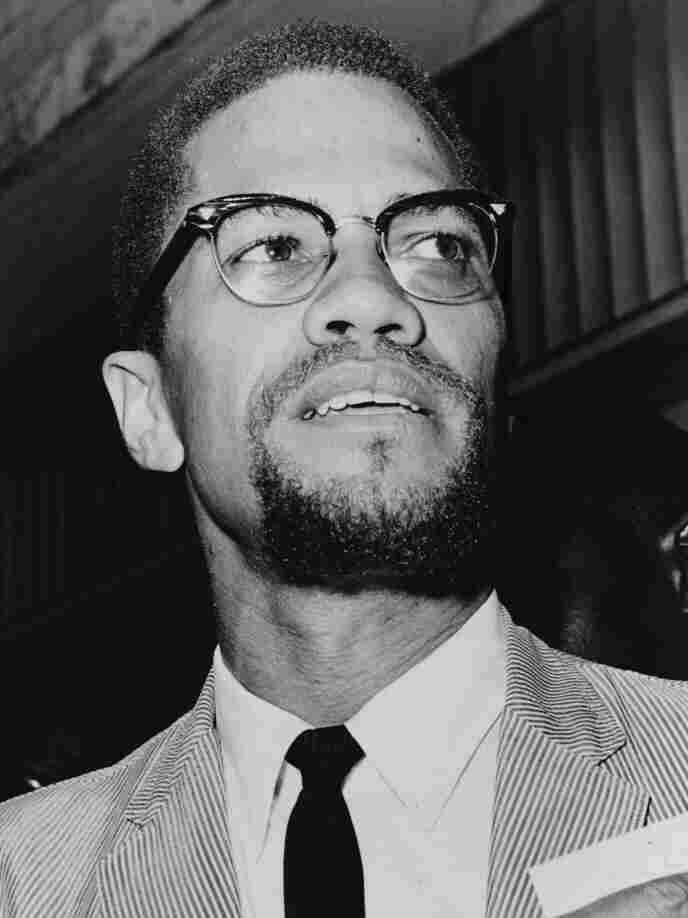 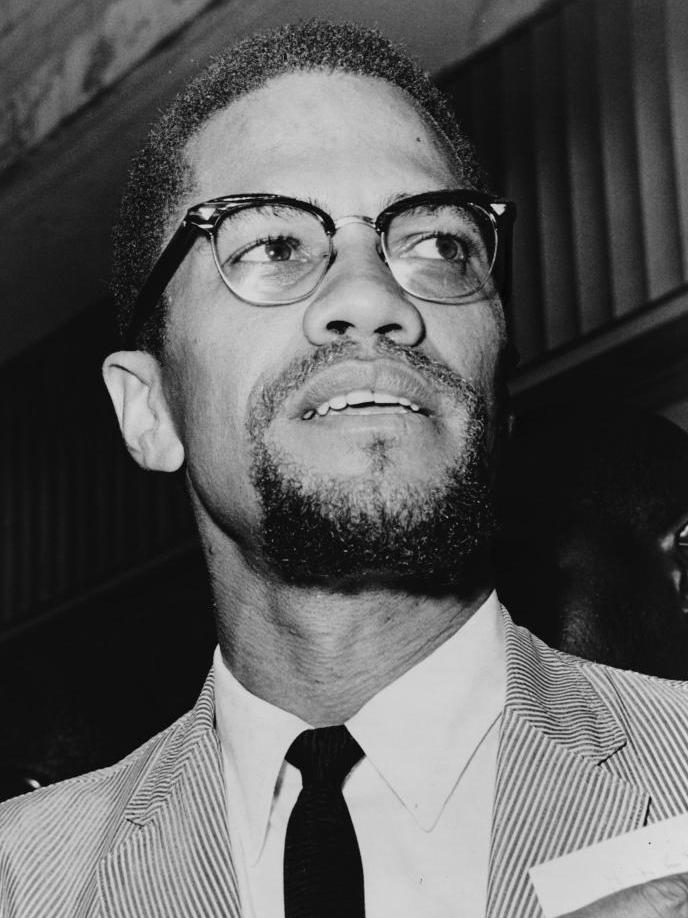 Malcolm X, shown here in 1964, spoke at Brown University in 1961 to defend his views. That speech was recently unearthed in the university archives.

Last semester, Brown senior Malcolm Burnley took a narrative writing course. One of the assignments was to write a fictional story based on something true — and that true event had to be found inside the university archives.

"So I went to the archives and started flipping through dusty compilations of student newspapers, and there was this old black-and-white photo of when Malcolm X came to speak," Burnley says. "There was one short article that corresponded to it, and very little else."

Malcolm X came to speak at Brown University in Providence, R.I., on May 11, 1961. Burnley noticed that at the end of the article, there was a brief mention of another article — also from the Brown student newspaper — written by a senior named Katharine Pierce. Her article was the reason Malcolm X wanted to visit Brown.

He tracked down Pierce's phone number and gave her a call. "I immediately started asking her what she remembered about provoking Malcolm X to come."

It had been 50 years since Malcolm X's speech at Brown, but Pierce slowly started to remember how it all happened.

Today, Pierce lives about an hour north of New York City. In 1961, she believed the Nation of Islam's message of separation of the races was destructive, so she wrote a detailed critique. Somehow, it caught the attention of the Nation of Islam. Two weeks after the piece was published in the Brown Daily Herald, representatives called.

"They said that Malcolm X wanted to come to Brown and defend his views, because Katharine's essay was so critical of the organization," Burnley says.

"Well, I think we were quite astonished," Pierce laughs. 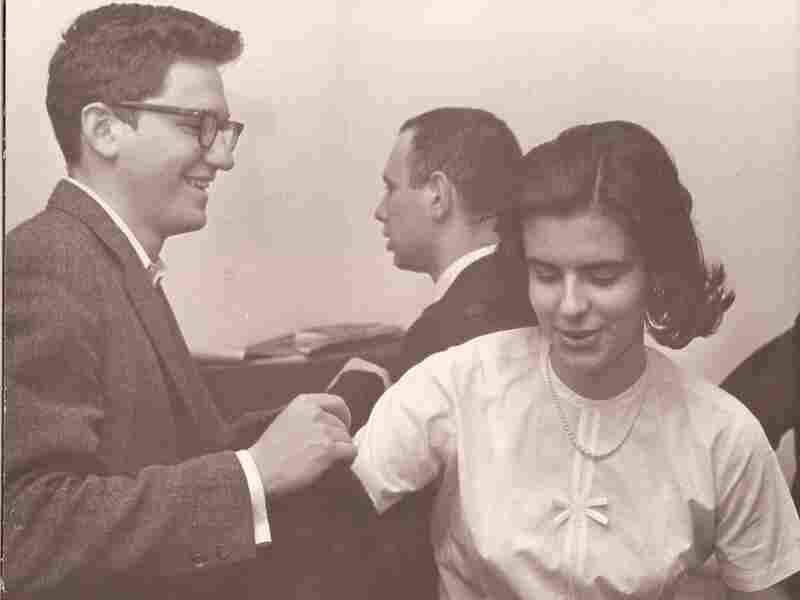 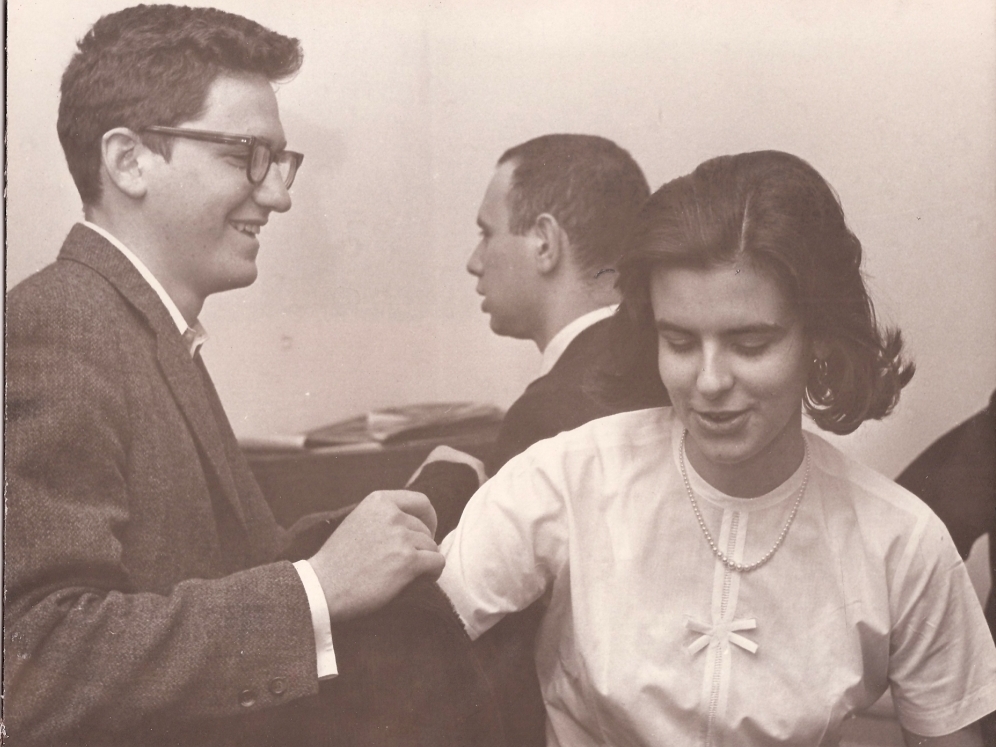 Richard Holbrooke and Katharine Pierce as students in 1961 at Brown University.

Help From A Diplomatic Legend-To-Be

Holbrooke and his staff agreed that they should have Malcolm X come to the school, Burnley says. The problem was convincing the school.

The university was worried about possible violence and about upsetting the NAACP, which had pressured other universities — including the University of California, Berkeley and Howard, one of the oldest historically black universities in America — to keep Malcolm X from speaking that year.

"Richard, as usual, said, 'What have we got to be afraid of? It's better that we let him speak, and it's better that the students make up their own minds than if we shut him out.' "

According to Burnley, Holbrooke took a hard line with the administration. If they didn't agree to allow Malcolm X to speak at Brown, Holbrooke would move the student newspaper off-campus — and break its ties to Brown.

"But in typical Holbrooke fashion, he prevailed," Marton says. "He used to recall walking with Malcolm X and his gigantic bodyguards from Richard's office in the Brown Daily Herald to the auditorium, where the students waited."

"That walk left a deep impression on Richard who, even as a 19-year-old, was already a budding historian," she says. 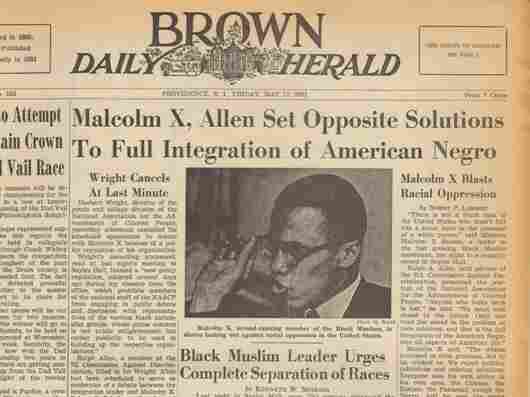 The front page of the Brown Daily Herald on May 12, 1961, the day after Malcolm X spoke at the university. This was the clipping that Malcolm Burnley found last year in the library archives at the university. Brown University Archives hide caption

Pierce unearthed a recording of that night — a recording she kept in a box in her attic. It's an extraordinary historical record — an early window into Malcolm X's evolving views and the future diplomat who would bring him to campus.

"Tonight, we present two different viewpoints on the American Negro and his future," said the young Holbrooke as the event began.

Pierce was allowed to make a brief statement before Malcolm X spoke.

"For those of us who feel that the Negro is an integral part of our culture, and who advocate for integration because we believe in the equality of all men, the Black Muslims are an indication of the fact that we have not done enough acting to make our position acceptable to the Negro dissatisfied with his present situation."

Malcolm X was originally supposed to debate a representative from the NAACP. But at the last minute, that representative, Herbert Wright, had backed out, so Malcolm X had hurriedly prepared a speech for the evening.

"He reveals a lot of his ideology and positions that are dated to years later in his life," Burnley says.

At other points, Burnley says, Malcolm X plays to the white audience. He even gets them laughing with a joke about where black people are found.

"They don't have a history of their own, so they let them tell you what their history is; and that is in essence that you found him in the jungle somewhere with a spear, chasing white people in a cannibalistic way to try to give the impression that white meat is the only good meat to eat."

The audience gasped when Malcolm X admitted some previous vices.

"No follower of the Honorable Elijah Muhammad partakes of any alcoholic beverage, reefer or tobacco, which is prevalent in the Negro communities across the country, even right here in the city of Providence. I myself was one of the foremost practicers or doers of everything that I've mentioned here so far; now I'm telling you the truth, and the teachings of the Honorable Elijah Muhammad stopped me from doing these things overnight."

"At several points, he references the 725,000,000 Muslims across the world versus the 20,000,000 so-called negroes, was his quote, in America," Burnley says. "The Nation of Islam refused the term 'negro.' They said it was kind of the white man's classification of black Americans, so that's why he said 'so-called negroes.' "

Burnley interviewed dozens of people who witnessed the speech. They all recalled being riveted — even if they didn't agree — by what Malcolm X had to say.

"He read his audience very, very well as a fine public speaker does," Pierce says.

"We who follow the Honorable Elijah Muhammad feel when you try to pass integration laws here in America, forcing white people to pretend they are accepting black people, you are making white people act in a hypocritical way. However, we feel that when you can change both of them and they come together voluntarily, without force or without pressure, then automatically you are furthering brotherhood and bringing about better relationships between the two races."

The entire speech lasted just under an hour. Afterward, Burnley says, Malcolm X invited students to come talk to him in the student lounge.

"At that point, he conducted an interview with these young white students," Burnley continues. "He was willing to greet them more intimately and in private, and obviously he was seeking publicity.

"He wanted to be as well-known as possible, but I don't know — it definitely is a gesture to make towards young white students, who, by all accounts, he wouldn't really want to have anything to do with, but he was willing to greet them and talk to them in private."

Burnley did eventually write a narrative account of the incident for his class assignment. He's also writing a much longer version.

Marton, Holbrooke's widow, says her husband spoke often about the story, though it's unclear whether he ever wrote it down. Holbrooke was planning to write his memoirs at the time of his death in December 2010.

As for Brown University?

"In my research, there is no mention in the university calendar for that year or in President Keeney's notes of Malcolm X coming. It's essentially just been whitewashed from the university records," Burnley says.

But, he adds, that is about to change.