Accessibility links
Job Market Could Help Obama's Election Stock All kinds of companies were hiring last month. U.S. employers added 243,000 jobs in January, and the unemployment rate fell to 8.3 percent. Experts are cautiously optimistic, but the boost in hiring may give the president extra momentum going into November. 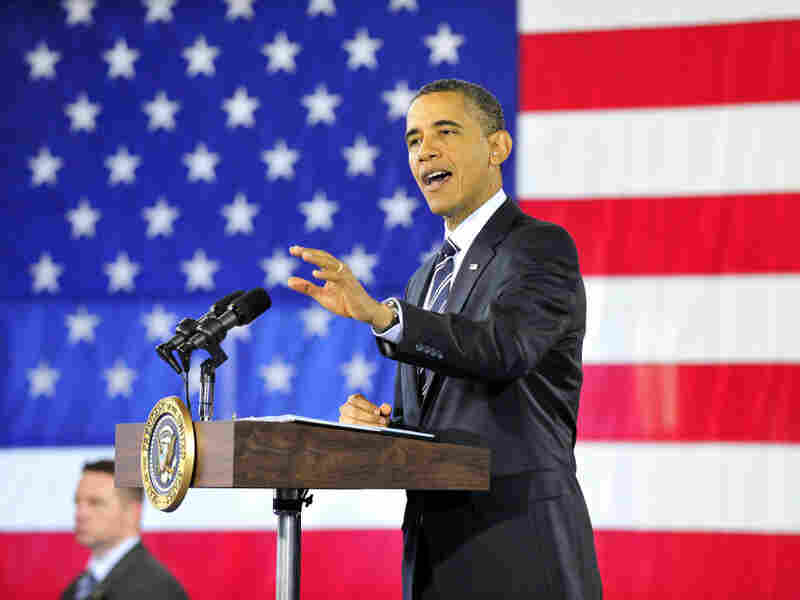 President Obama speaks about the economy Friday in Arlington, Va. Obama says he wants to "send a clear message to Congress: Do not slow down the recovery that we're on." Ron Sachs-Pool/Getty Images hide caption 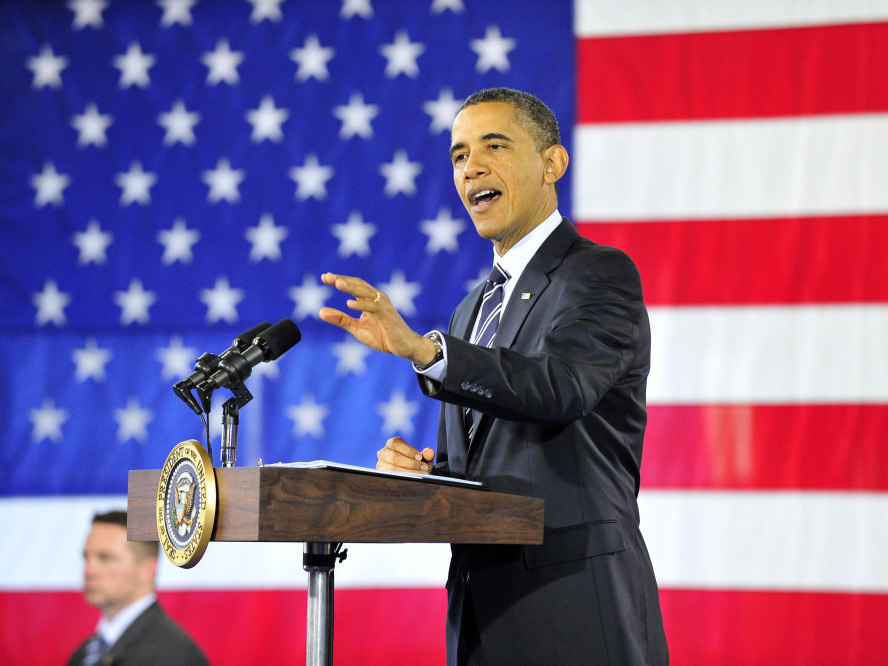 President Obama speaks about the economy Friday in Arlington, Va. Obama says he wants to "send a clear message to Congress: Do not slow down the recovery that we're on."

It turns out January was a surprisingly good month in the job market. U.S. employers added 243,000 jobs in January, and the unemployment rate fell to 8.3 percent.

That better-than-expected news from the Labor Department triggered a rally in the stock market Friday, with the Dow climbing more than 150 points. The news could also help the stock of President Obama.

All kinds of companies were hiring last month: 21,000 new construction jobs, 50,000 factory jobs and 30,000 new jobs for temporary workers. Tom Maher owns the Manpower temporary firm in Dayton, Ohio. He supplies a lot of workers to the auto industry.

"Our business has been steadily improving. I've seen an increase in billable hours week over week, which is a wonderful indicator," Maher says. "So we're seeing, at least as the year begins, pretty positive activity."

Even as he writes those extra paychecks, though, Maher is cautious. He was enjoying a similar boost in business this time last year, only to see it fizzle out after the Japanese tsunami wreaked havoc on U.S. supply chains, and the Arab Spring triggered a spike in oil prices.

"It's very important to take things really one day at a time. While I'm optimistic, I'm not exuberantly optimistic. But things are improving," Maher says. "I read an article locally that our restaurants are much busier than they were before. They're hiring staff. If people are spending more money on their dining entertainment, then obviously they're feeling more optimistic than they have been."

Nationwide, bars and restaurants added 33,000 workers in January. Overall, the hiring spree was the strongest in nine months — a pleasant surprise for forecasters like Nariman Behravesh of IHS Global Insight.

"It's certainly too early to break out the champagne in the sense that this has been a very uneven recovery," he says, "but these are really good numbers — have been quite good for a couple of months. So at least we're getting going a little bit in terms of the hiring process."

Have Economists Got It Wrong About The U.S.?

Between Now And Election Day

That could be a break for Obama. The jobless rate is still high, higher than any president has been re-elected with since Franklin Roosevelt. But political forecaster Charlie Cook says at least now Obama has a fighting chance in November.

"The folks in the White House have had a lot of bad news for a really long time. They're just starting to get a spat of some good news, and it points to a real close race," he says.

Of course, a lot could happen between now and Election Day. Cook says many voters will be making their judgments about the president's economic stewardship based on what happens over the next six to eight months.

Obama acknowledged Friday that far too many Americans are still looking for work, and he warned the numbers could go up and down in the months to come. The jobless rate has tumbled nearly a full percentage point since August. It's now the lowest it's been since the president's first full month in office.

"The unemployment rate came down because more people found work, and altogether we've added 3.7 million new jobs over the last 23 months," he said.

Obama urged lawmakers not to jeopardize the recovery by allowing a payroll tax cut to expire this month. After all the economy's been through, he said, it doesn't need any self-inflicted wounds.

"So I want to send a clear message to Congress: Do not slow down the recovery that we're on. Don't muck it up. Keep it moving in the right direction," he said.

Republicans argue the country could be enjoying a stronger recovery, were it not for business uncertainty over taxes and regulation. But that in itself marks a shift in the debate. For years, it was the president, saddled with bad economic news, who was forced to argue that "things could be worse."

Now, Obama can point to encouraging numbers, leaving the GOP with the challenge of making the case, "things could be better."