Accessibility links
Out West, GOP Candidates Mine For Caucus Votes Saturday is Republican presidential caucus day in Nevada. Mitt Romney is counting on another win to keep him on the path to the nomination. Newt Gingrich and Ron Paul have also been campaigning in the state, while Rick Santorum is looking ahead to later contests. 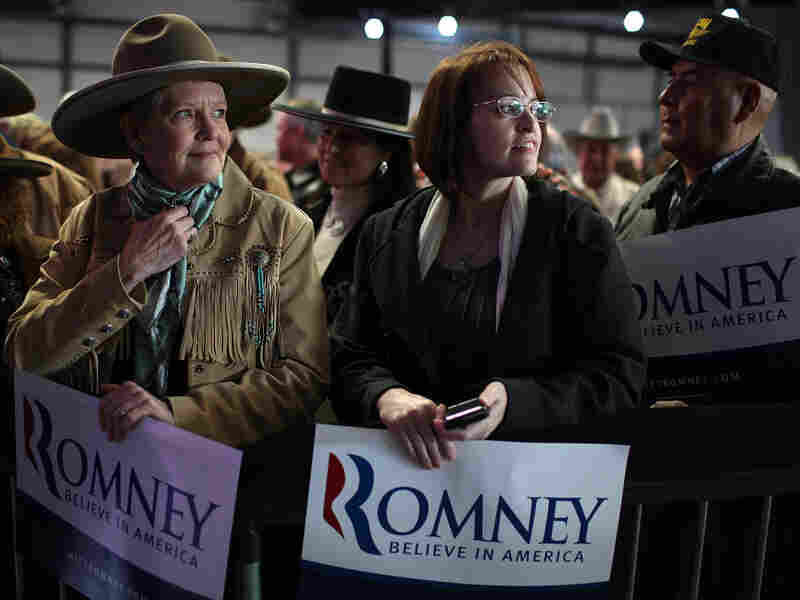 Romney supporters gather for a rally at the Elko Regional Airport in Nevada on Friday. The state holds its caucus Saturday. Justin Sullivan/Getty Images hide caption 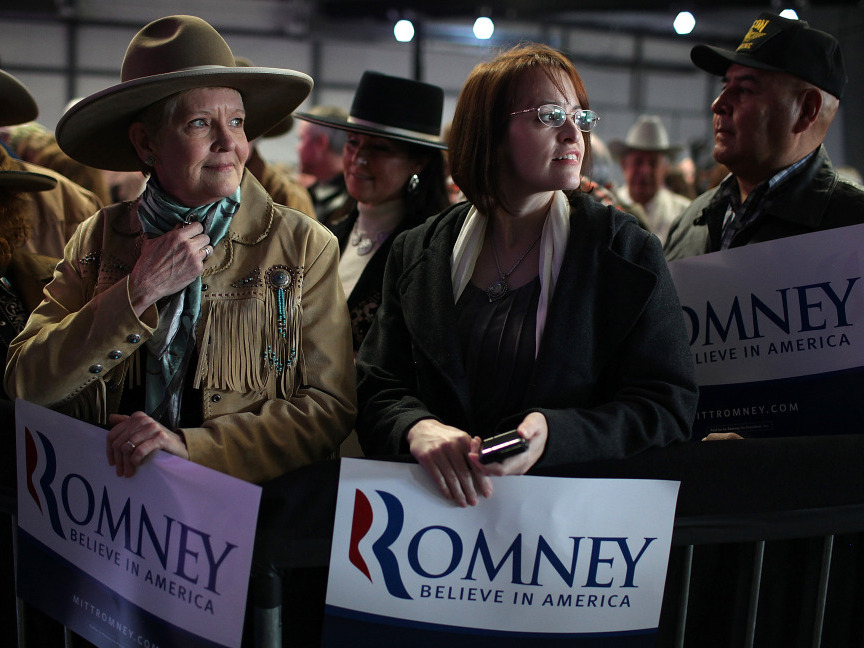 Romney supporters gather for a rally at the Elko Regional Airport in Nevada on Friday. The state holds its caucus Saturday.

Saturday is caucus day in Nevada, the first state in the West to vote as Republicans go about choosing their presidential candidate.

Mitt Romney is counting on another win here to keep him on the path to the nomination. Newt Gingrich and Ron Paul have also been campaigning across the state, while Rick Santorum is in the Midwest looking ahead to later contests next week.

Believe it or not, Nevada leads the country in unemployment, home foreclosures and bankruptcy.

But at Romney's rally in Elko on Friday, the stories were vastly different. In Elko, there are not enough houses for everyone who wants to buy.

"My wife sells real estate, and they're having a hard time finding houses for people," says Jim Moore, who works for the Federal Aviation Administration.

Elko is a gold-mining boomtown. Michael Cornell works underground in the mines.

"We've been relatively untouched. I make six figures a year, and many of us here do," he says. "We've had a lot of people come from other parts of the country to live here because of the jobs situation."

That's really different from a lot of Nevada.

"I hear that there's some sort of unemployment rate problem here in Nevada, and we don't see any of it here," Cornell says.

Battered By The Bust, Nevada Voters Search For Slivers Of Hope

"The heart of the cowboy, the love of freedom and the outdoors and nature being celebrated this week with cowboy poetry," he said. "Congratulations to you that have come to listen to some wise words from some very humorous and bright people."

A week ago in Florida, Romney was hammering Gingrich incessantly. But ever since his decisive win in that state, he has kept his sights trained solely on President Obama.

"We have a president who is convinced that government is the answer to every challenge we have. Government has an important role, but it's not the answer," he said.

Romney has been very popular in Nevada, dating back to when he won the state caucuses four years ago.

Still, he encounters the same challenges here that he does across the country. Ashley Leahy came to this rally to see what Romney had to say, but she says she just doesn't like him very much.

"I think that he can come across as very abrupt and pompous and very defensive," she says.

Leahy's planning to vote for Paul, a man who expects to climb in the standings Saturday in a state where loyal support makes a difference.

He was out in Las Vegas on Friday, thanking some of those supporters at a "Gun Owners for Paul" event. Later, he addressed a group of veterans.

"National defense is the responsibility of the federal government, and, unfortunately, I think we spend too much money overseas doing the wrong thing," he said, "which actually undermines our national defense."

Then there's Gingrich, whose goal here is to knock Romney off the pedestal of inevitability.

"It isn't good enough for the Republican Party to nominate Obama-lite," he said Friday.

Gingrich rallied voters at a country-western restaurant in Las Vegas, returning to Romney's statement earlier this week that he doesn't care about the "very poor."

Romney has said he misspoke and meant to say that his focus is on helping the middle class. Gingrich called the gaffe evidence that Romney's not ready for prime time.

"The elite media did exactly what Obama will do this fall and kept replaying 'I don't really care about the poor,' which by the way is not a very clever thing for somebody who's very wealthy to say," Gingrich said. "Talk about every possible example of what we don't want in a general election candidate."

Out Of Nevada, In The Race

The fourth candidate in the race, Santorum, is not in Nevada. He spent Friday in Missouri battling a cold during a joint appearance with the evangelical leader James Dobson. Dobson asked if Santorum was "in for the long haul."

"Look, a lot of people have come up to me and said ... 'Please stay in the race.' I'm not getting out of the race," Santorum said.

Having opted out of the Nevada contest early, however, Santorum is not likely to be a factor in the results that come in late Saturday.