Accessibility links
Employed But Not Paid, Some Greeks Voice Protest Unemployment has doubled in Greece in the past two years, nearing 20 percent, and there are many Greeks with jobs who might as well be unemployed — they have not been paid for months. Some still show up for work every day, hoping that things will take a turn for the better. 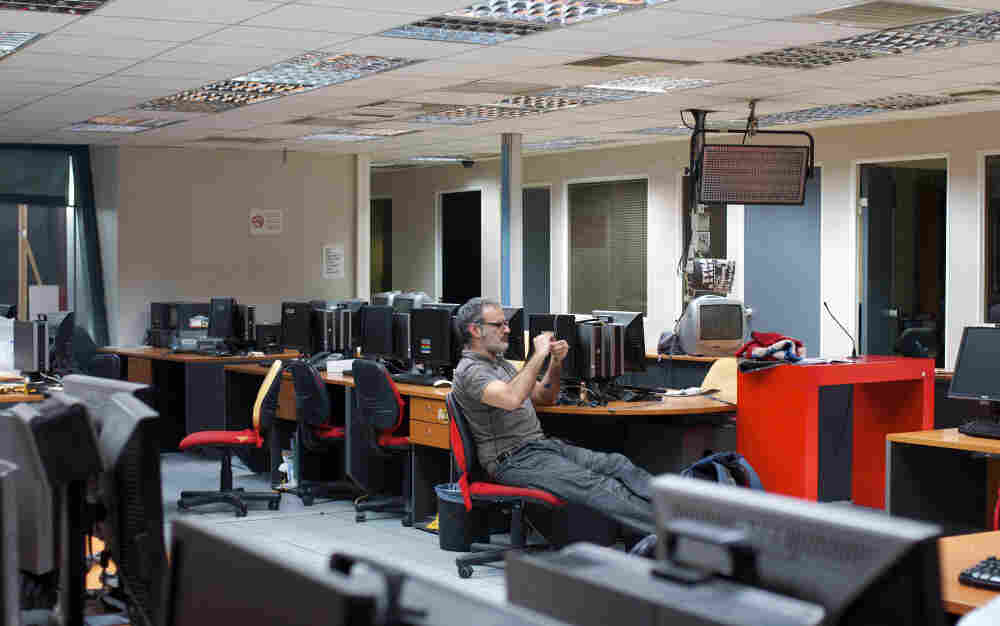 ALTER's newsroom no longer operates as part of the strike. Instead, the unpaid staff is broadcasting messages demanding their pay and accusing the company's owner of defrauding them. Joanna Kakissis/NPR hide caption 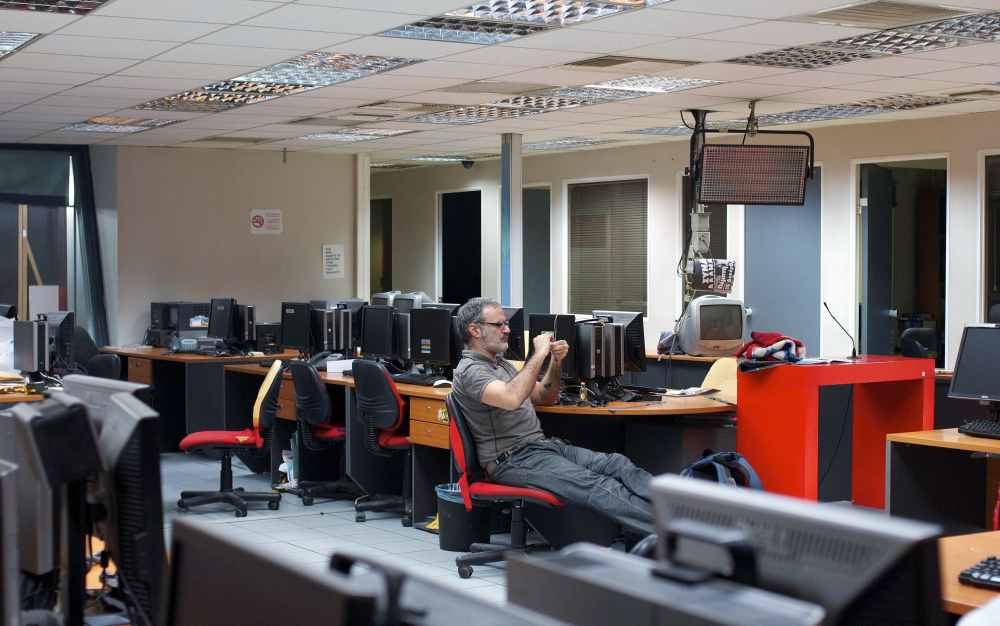 ALTER's newsroom no longer operates as part of the strike. Instead, the unpaid staff is broadcasting messages demanding their pay and accusing the company's owner of defrauding them.

The number of Greeks who are out of work has doubled in the past two years, as Greece has suffered its worst debt crisis in recent memory and a crippling recession. But the economy is so bad that even Greeks with jobs haven't been paid for months. It's a widespread problem that's left thousands in a desperate limbo.

One is Dimitris Perakis, the foreign news editor at ALTER Channel, a small private television station in Athens. He's 37 and has worked at the station for 15 years — his entire career in journalism. 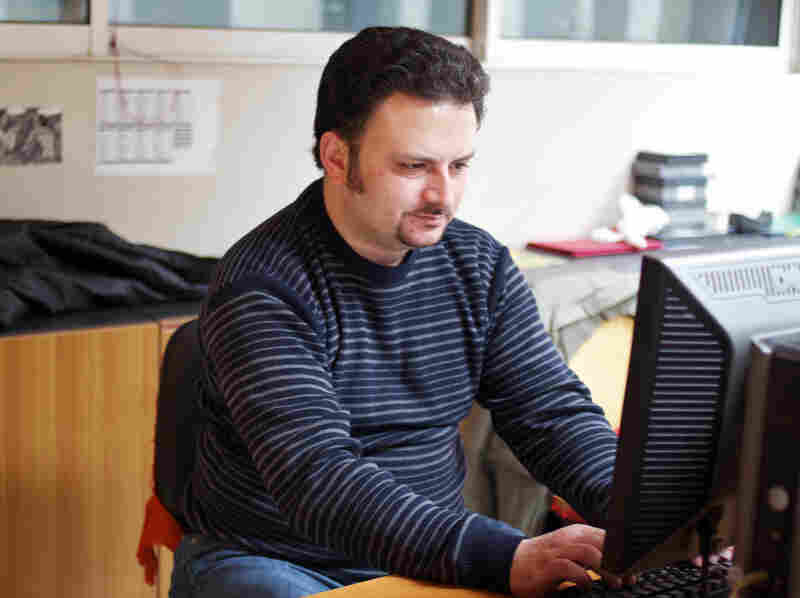 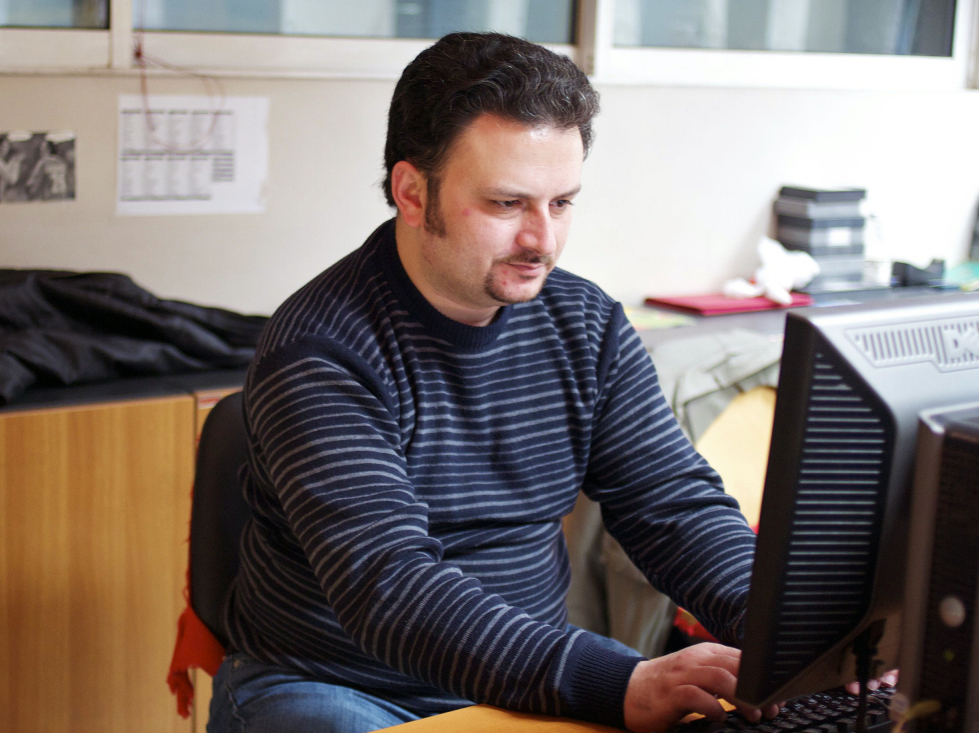 Dimitris Perakis, foreign news editor at ALTER, is owed more than $22,000. He's worked at the company for 14 years.

"I feel like this is a second home," Perakis says, "because I've spent most hours of the day here."

Perakis loved his job and often worked 12-hour days. But a year ago, ALTER TV fell behind on paying salaries. The company said advertising revenues were down and the owner could no longer manage the station's massive debt.

So the station just stopped paying. It owes more than $14 million to 650 people.

The company owes Perakis more than $22,000. He's getting by these days with the help of family and a bit of savings.

"I live with my younger brother," she says. "Thank God he has a job, and he's being paid regularly so we can cover whatever there is for our house. There are no parents or husband or anyone that's supporting us."

In November, the ALTER workers finally got fed up waiting for their money. They employed a favorite tactic of Greek labor — they shut down the station and occupied it.

Instead of news and talk shows, the workers are now broadcasting demands for pay and allegations that their boss has defrauded them. The messages scroll against a backdrop of dramatic music.

If ALTER TV laid off these workers, the owner would have to pay millions in compensation. Under Greek law, white-collar workers, for example, with 24 years on the job are entitled to 28 months of severance pay.

These days, few employers can afford that, says Vassilis Masselos, a shop owner who has been pressing the government on business reforms.

"It's not a matter of choice, it's a matter of necessity," Masselos says. "They can't find the money to pay employees. They cannot fire them. So they are locked into a sort of limbo that nobody can get out of."

The workers are in limbo, too. Even if they actually get laid off, the Greek state is so broke, it's having trouble keeping up with unemployment benefits.

Stelios Karagrigoriou says he feels like a hostage. The 35-year-old still goes to work every day at the information technology company that owes him more than $11,000.

If he quit, theoretically he could get back pay. But another job? Forget about it. He's sent out 500 resumes.

"You can't find a job in Greece," Karagrigoriou says. "I'm looking for a job in London but even though they reply to my CVs, I wasn't lucky so far. But in Greece, nobody answers."

Back at ALTER TV, the workers say no one has answered them either. They're on the night shift at the station and playing cards. The owner has offered to give them a fraction of their salaries, but they've refused. They believe the owner really has the money to pay them in full and could be ordered to do so by a court.

Since they began their strike, people have been dropping off food for them. They store the lentils, beans, pasta, rice, flour and oil in the virtual studio where TV presenters used to read the weather.

Perakis says he's moved by the outpouring, but he looks sad as he walks upstairs to the empty newsroom.

He sits at his old desk as foreign editor, turns on the computer and scrolls through stories about Syria, Egypt and Somalia.

"It helps me forget about all this for a few minutes and pretend that I'm back at work," he says.