Accessibility links
Unions Create TV Ad To Appeal To Young People Hoping to continue a conversation about inequality started by the Occupy Wall Street movement, a recently tested ad by the AFL-CIO doesn't mention unions. Instead, it focuses on a "Work Connects Us All" theme.

This TV ad is the first in a new campaign by the AFL-CIO to change how young people feel about unions.

At a time when young activists from Zucotti Park to Tahrir Square have shown what the Internet and social media can do to help organize people, some American unions have been taking notes.

The AFL-CIO is embarking on a new advertising campaign that combines new and old technologies.

"Work doesn't separate. It's what binds us together," a commercial voice-over says in the recently test-launched ad campaign with a disarmingly simple message.

The campaign is called "Work Connects Us All," and it's TV ad features a multiracial cast of firefighters, teachers, autoworkers and even baristas gathered in a stark industrial interior.

"I teach your kid. You fix my car. He builds my city. She keeps it safe. Work is what connects us," the ad says.

It never mentions unions, and only a quick credit at the end tells the viewer that it is sponsored by the AFL-CIO.

The ad is airing in three test markets: Pittsburgh, Austin and Portland.

Elizabeth Shuler, the secretary-treasurer of the AFL-CIO, said it's part of a long-term effort to "reintroduce" the labor movement to young people.

"I think really we are looking to reach out and start a conversation with people that we normally don't talk to," Shuler said. "Whether you're in a union or not, we're trying to show we have shared values around the notion of hard work that really drives America forward."

This ad campaign is the AFL-CIO's first in 15 years that isn't linked to an election or specific legislation. It comes as union membership has declined to about 12 percent of the American workforce and less than 7 percent of the private sector.

But Shuler said the unions hope to capitalize on the opening created by the Occupy Wall Street movement, which she said has changed the national conversation. 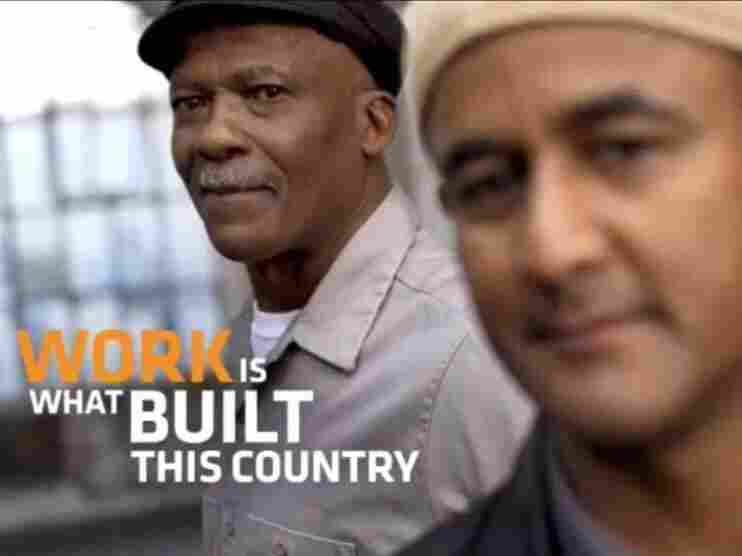 A new TV ad recently test-launched by the AFL-CIO discusses work without ever mentioning unions. Courtesy of the AFL-CIO hide caption

toggle caption
Courtesy of the AFL-CIO 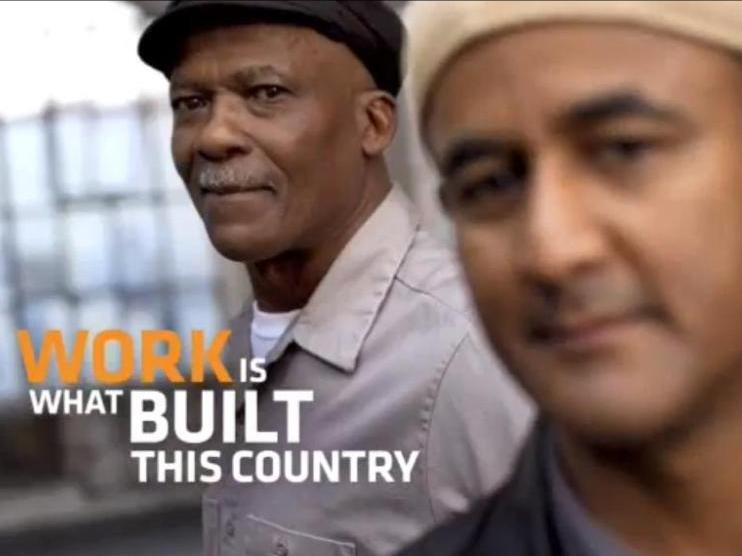 A new TV ad recently test-launched by the AFL-CIO discusses work without ever mentioning unions.

Courtesy of the AFL-CIO

"It's a conversation now around water coolers and at dinner parties that we never thought would be happening, this idea that people would be talking about inequality the way that they have been, and it's that spark we really want to connect to," Shuler said.

Harley Shaiken, a labor expert at the University of California, Berkeley, called the ad campaign "innovative" and "interactive."

"A lot of the campaigns unions have done in the past have been sleepers, you know. There's no getting around it." But the new ad is "not just a commercial," Shaiken said. "It's a new approach."

"I don't think the ad stands alone. There's a website. There's a lot of interactive dimensions to it, and I think the labor movement is experimenting," he said.

The AFL-CIO is flying into some stiff headwinds.

Last year a Gallup poll found that a slim majority of Americans — only 52 percent — approve of unions. That's near a record low.

NPR went to a coffee house in Portland, one of the TV ad's test markets, to gauge reactions. No one there had seen the ad, but people were receptive, if somewhat skeptical.

"I guess it's a valuable message to get out there," said Ben Lichenstein, a 28-year-old engineering student. He wondered whether the unions can tap into the energy of the Occupy movement.

"Large unions tend to be very insistent that the best way to approach these things is incrementally, and I think there has to be a second step and perhaps a third or a fourth in getting that message through successfully," he said.

But Jeremy Broche said he doesn't think it will change people's opinions.

"I've always had a favorable view of unions but I know plenty of people that don't, and I don't think a single ad would change that," the 29-year-old bartender said. "I think that boots on the ground, actually talking with people, talking about what unions are doing, changes that view."

Union officials say that's exactly the kind of feedback they need if they hope to convince younger people that the union movement can speak for them.