Accessibility links
Madonna At Halftime: What It Takes To Last Madonna came to the Super Bowl halftime show on Sunday night, and despite hearing a lot of backtalk about looking old, she demonstrated that she's enduring with a lot of grace. 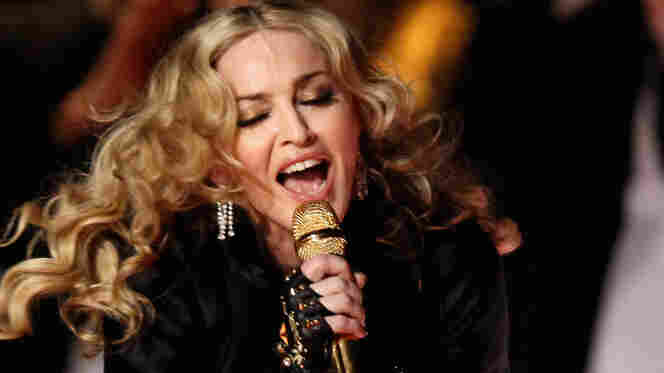 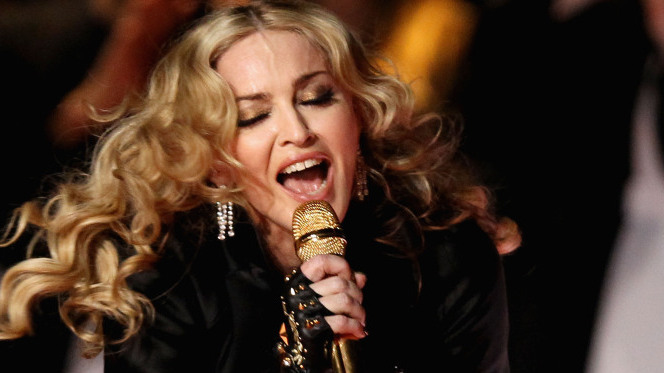 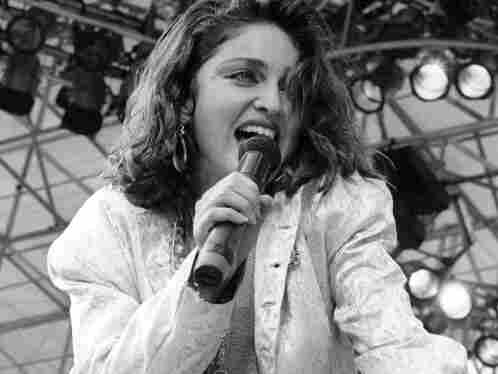 Notwithstanding the specific images that would come to define her — Marilyn Madonna, dominatrix Madonna, Evita Madonna — this was just a young, magnetic singer, clearly not lip-synching, dancing in her heavy, shoulder-padded jacket in front of a crowd that was drenched in sweat. This was July 1985, after "Like A Virgin" colonized MTV, after the underwear-as-outerwear, right before she married Sean Penn. She was already a capital-T Thing, but this was really just singing and dancing, and anyone who comes to think of her as purely an imagined concoction, all elaborate hat and no cattle, someone who never existed outside of videos, is misremembering.

If you'd been able to put down money that day in July 1985 on whether she would be playing the Super Bowl halftime show more than 26 years later, and if you'd actually done it, you'd probably be rich now. Her chances for longevity were widely regarded as so slim as to be an available joke. My favorite TV show then was Moonlighting, and I remember an episode they did somewhere around this time about recovering a lost Rolodex full of famous names. In negotiating for its return, David Addison (Bruce Willis) asked for just a few of the cards back if he couldn't have the whole thing. Maybe he could just have the M section, he suggested. Or maybe just Madonna. "Nobody's going to want her number next year anyway," he said.

But here she is, 53 years old, it's four presidents later, and she's still a headliner. Granted, she's a headliner at the halftime show, an event that's shifted more and more toward legacy artists like The Who, Bruce Springsteen, and Tom Petty. It's tempting to attribute the nasty Twitter commentary about how she allegedly looked old and haggard — really? — to unreasonable expectations placed upon women around aging, but honestly, Mick Jagger gets the same thing. The Who got it, Bob Dylan gets it, Tom Petty gets it. It's part and parcel of aging in front of the people who once bounced your work off of their youth to discern its shape and now aren't interested in seeing whatever may be reflected in your not looking exactly like you used to.

What's curious, given how much "ewww, she's too old" stuff went around on Twitter, is that everything she did Sunday night is exactly what it should mean to age gracefully. She did what she loves and what she's always been good at: infectiously danceable pop in high-energy production numbers, assisted by lots of dancers. She looked happy. She embraced younger performers including Nicki Minaj and M.I.A., both of whom share her penchant for self-invention and both of whom are on her new single. She even made judicious choices when picking hits to perform. "Like A Virgin" might be the go-to song when Ricky Gervais wants to make a joke about her at the Golden Globes, but she's right to have relegated it to the background these days in favor of better stuff like "Vogue," which remains an irresistible confection.

Certainly the halftime show, as everyone knew it would, delivered a certain amount of over-the-top nonsense, as has been required of Super Bowl halftime shows stretching back to the days when they used to feature Up With People. (Those shirtless dudes hauling Madonna with ropes may have been silly, but they are no sillier than Indiana Jones And The Vince Lombardi Trophy.) And having the words "WORLD PEACE" appear in lights at the end was probably the only thing she could do that would be sillier than all that had come before.

It's not that Madonna is the embodiment of grace for anyone else. She's done some ridiculous things, and she's picked up such hilarious affectations along the way that you can refer to a vague British accent of unknown origin as "doing a Madonna" and you can expect to be understood. But this version of Madonna, I think, is grace for her.

There was always going to be a Madonna At 53, alongside those Marilyn and Evita Madonnas. And really, what could it have looked like, other than this? What was she supposed to be at this point? Invisible? Was she supposed to abandon the dance pop to which she so palpably loved shaking her shoulders in a stadium in Philadelphia in 1985 and start singing standards? Would that not have invited a different kind of criticism, that she had gone all cruise-ship on us?

It's awfully hard to endure in public, particularly if your image tends to be big rather than little. It's hard to avoid a series of unwinnable arguments — you've changed too much; you haven't changed enough. You look old; you're trying too hard to look young. You won't accept that you're older; you've lost all the charm of your youth. But more than a quarter-century after she stubbornly danced in that ridiculously heavy jacket in all that jangly jewelry, Madonna seems to have figured out, if nothing else, how not to worry about it.