Accessibility links
With Syria Embassy Shut, What's Next For The U.S.? The defeat of a peace plan at the U.N. and the closure of the American Embassy in Damascus represent the latest blows to attempts to use diplomacy to end the violence in Syria.

With Syria Embassy Shut, What's Next For The U.S.?

With Syria Embassy Shut, What's Next For The U.S.? 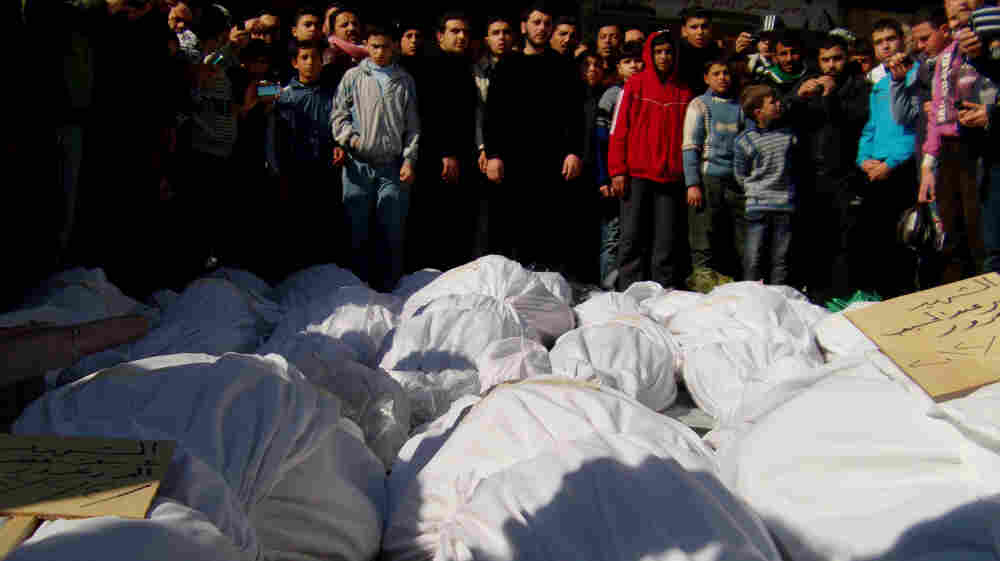 Syrians attend a Feb. 4 burial ceremony of what activists say are victims of shelling by the Syrian army in the central city of Homs. The city has been the scene of the bloodiest fighting in Syria in recent days. Handout/Reuters/Landov hide caption

President Obama says it's time for Syrian President Bashar Assad to step down. Yet Monday's decision to shut down the U.S. Embassy in Damascus reflected the deteriorating conditions in a country that appears locked in a protracted conflict with no end in sight.

"The closing of the U.S. Embassy is a clear signal to the international community that it's not safe for diplomats in Syria," says Sen. Ben Cardin, a Maryland Democrat.

The announcement came two days after Russia and China vetoed a U.N. Security Council plan put forth by the Arab League in an attempt to end 11 months of violence.

The death toll is estimated to be well over 5,000 at this point, most of them civilians. But given the failure at the United Nations, it's not clear how the U.S. and its allies might apply enough pressure to force Assad to step down.

"The only action that shouldn't be on the table is to be silent," says Cardin, who serves on the Senate Foreign Relations Committee.

The Obama administration says it does not favor outside military intervention in Syria, as was the case in Libya, where U.S. and NATO forces helped drive longtime leader Moammar Gadhafi from power.

By comparison, Syria is a larger country with a more powerful military. It has allies such as Iran, and supporters in the wider world, as the U.N. vote suggested. If other countries were to get involved in Syria, it could trigger a broader conflict in an extremely unstable region.

Libyan rebels also enjoyed key advantages that the Syrian opposition does not have. In Libya, the rebels controlled a substantial amount of territory.

"There are certain options, you have to have — a broader consensus internationally, you need to have clearer opportunities on the ground," Cardin says. "In Libya, that's what we had. Here, we don't, so there are limits to what we can do."

French President Nicolas Sarkozy and German Chancellor Angela Merkel said Monday that they hope to form an international contact group of countries working to put an end to repression in Syria.

The Obama administration has already had some success in its campaign to isolate Assad. The European Union, which had been Syria's primary market for oil exports, blocked such sales in November. 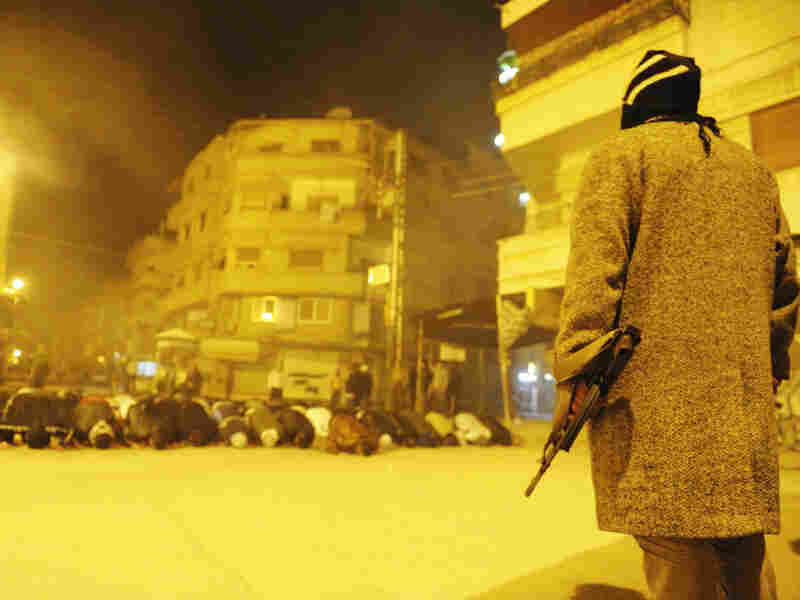 A Syrian rebel gunman stands guard as demonstrators pray on the street in Reef Damascus, an area north of Damascus, on Feb. 4. The demonstrators were protesting a government crackdown in the central city of Homs that left scores dead. Stringer/Reuters/Landov hide caption 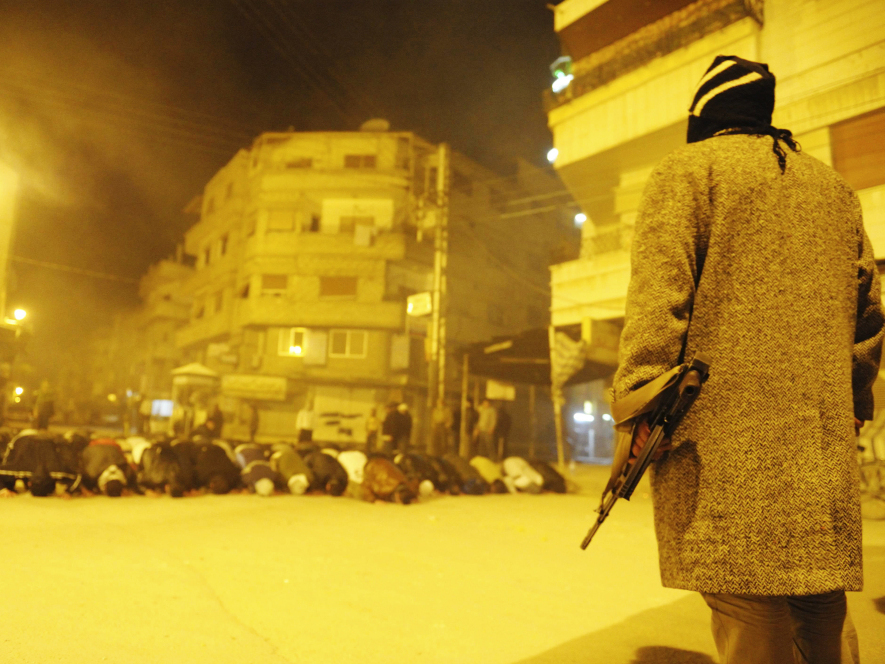 A Syrian rebel gunman stands guard as demonstrators pray on the street in Reef Damascus, an area north of Damascus, on Feb. 4. The demonstrators were protesting a government crackdown in the central city of Homs that left scores dead.

Around the same time, the Arab League imposed sanctions on Syria — an unprecedented action against a member state.

But not all of Syria's neighbors have upheld the sanctions. "There is no way that they can convince Lebanon to stop or slow down the trade," says Haleh Esfandiari, director of the Middle East program at the Woodrow Wilson Center for International Scholars.

Russia and China both still engage in considerable amounts of trade with Syria. And the Arab League's attention to the issue may not remain as ardent, according to Ian Lustick, a political scientist at the University of Pennsylvania.

While outside military intervention is not currently on the table, there is talk of further economic sanctions, as well as humanitarian and medical assistance for the Syrian opposition.

But that opposition is fragmented. Street action has been driven by local groups, with no national political force able to claim the mantle of leadership.

"There's almost nothing coherent about Syrian opposition forces," says Ed Husain, a senior fellow at the Council on Foreign Relations. "The most likely situation is that some will accept Western backing, but others won't."

Even deciding whether to arm opposition forces entails risks for the U.S. and other outside forces, Husain says.

"The temptation for Western powers and Qatar and even Saudi Arabia to help the rebels is strong," Husain says, "but there is a failure to recognize that China and Russia are equally keen to arm the regime."

'A Long And Bloody Struggle'

Even if there's not a proxy war, analysts are already debating whether Syria will slide into full-fledged civil war.

Syria is ethnically divided, with the regime dominated by minority Alawites, an offshoot of Shiite Islam. The Alawite officer corps will not want to step down without assurances that they would not suffer reprisals in any post-Assad period, says Lustick, the Penn professor. And the opposition may not be able to offer such a guarantee.

"People have not wanted to come to the conclusion that this is going to be a long, drawn-out civil war, and [that] Assad is going to have to be overturned militarily," says Joshua Landis, director of the Center for Middle East Studies at the University of Oklahoma. "But people are increasingly coming to that conclusion."

Pursuing diplomatic solutions to the Syrian problem, ultimately through the U.N., has been the primary focus and concern of U.S. policymakers, Landis says. But that course has reached a dead end, he suggests — at least for now.

Instead, Assad may be further emboldened by the Security Council veto. Not that he's hesitated to use force against his own people up to this point.

"It's going to be a long and bloody struggle, because Assad still has a lot of supporters, and he has a professional army," Landis says. "There is going to be no cavalry riding over the hill to save the Syrian opposition from a long struggle."