Accessibility links
The Risks And Rewards Of Practicing Yoga Yoga can be extremely beneficial, but it also can be quite dangerous. Pulitzer Prize-winning journalist William Broad examines the pleasures and pitfalls of the practice in his latest book, The Science of Yoga. 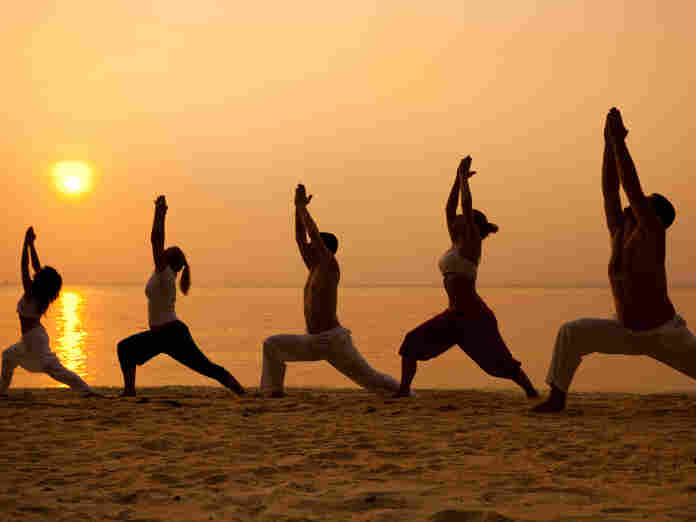 Five people on a beach stand in the warrior pose. iStockphoto.com hide caption 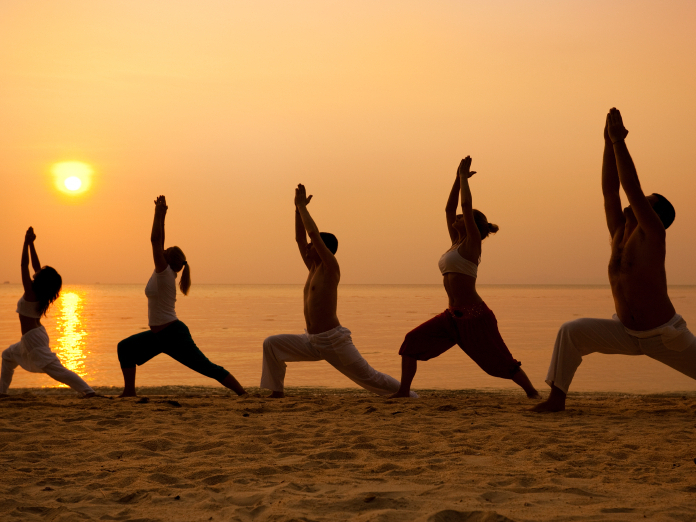 Five people on a beach stand in the warrior pose.

Twenty million people practice yoga in the United States. William Broad, a Pulitzer Prize-winning science writer for The New York Times, is one of them. Broad started doing yoga as a freshman in college in 1970 and has been practicing ever since.

"I can't imagine doing [my] job without it," he tells Fresh Air's Terry Gross. "It's an excellent means of stress management. Yoga helps me relax. And that's the thing that most yogis swear by. No matter how poorly you do it or how stressed you are, you're going to get this guaranteed de-stressing, relaxing, anti-civilization effect of yoga — which is wonderful."

Broad's new book, The Science of Yoga, investigates both the risks and rewards of yoga. Using the latest scientific research, Broad explains the benefits of yoga, while debunking the myths surrounding it and explaining why certain yoga moves can even be quite dangerous. 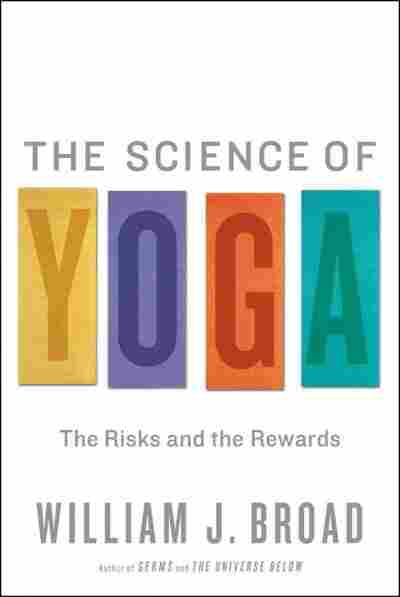 The Science of Yoga

The Risks and the Rewards

Title
The Science of Yoga
Subtitle
The Risks and the Rewards
Author
William J. Broad

"There are [poses] that really bend your neck a lot," he says. "The shoulder stand, the plow, those kind of things. You're rotating your neck around 90 degrees, and it turns out that there are delicate arteries that run through your neck called vertebral arteries. And if they get tweaked around too much ... and you're unlucky, you can tear the lining of the arteries, you can have clots, and you get up from that pose or you're in the middle of a pose — and those clots move into the brain, and you've got brain damage. Some people even die."

"It's mostly complex joints where people have problems," he says. "You have dislocations and tears, ligaments and all kinds of nasty stuff. It's a wide range, but generally you're not just talking about torn muscles — you're talking about joint problems in one way or another."

Not Used To Knot-Tying Poses

Part of the reason we get injuries, he says, is that we sit in offices all day and aren't used to the knot-tying poses.

"It just doesn't work, especially if you have an inexperienced teacher, a teacher who may be gifted [or] a teacher who may be genetically predisposed to flexibility and may think that everybody should be that flexible," he says. "And they aren't. Guys aren't. Guys tend to be stiffer than women. ... I try to start tying myself in knots like [the women in my class] and it doesn't work."

Broad says that until recently, many yoga teachers were in denial about the potential downsides of yoga. But that's improved, he says, and there are dozens of groups working to make the practice of yoga safer — and better.

"[Groups] are using props to ease the poses," he says. "They use blankets with the shoulder stand to decrease the angle, so your neck isn't flexed at 90 degrees. ... Dozens of groups are out there refining poses, doing smart things. ... Most people think of yoga as thousands of years old and perfect. Well, it's changing a lot — and some of that stuff is making the poses gentler and in some ways better for you."

The Benefits Of Yoga

And some yoga poses can be extremely beneficial, he says. Scientific studies have shown that yogis have more spinal flexibility and show some improvement in cardiovascular health markers.

"There's been study after study after study that says you do not get your heart pumping in the way you do in aerobic sports like running, swimming and spinning," he says. "On the other hand ... yoga has this remarkable quality to relax you, to de-stress you. That means your heart rate goes down. That means if you're prone to hypertension, that lowers. There are all these wonderful cardio effects that come from the other end of the spectrum: the relaxation of the heart, rather than the pumping-up phenomena that you get from aerobic sports."

Broad says there's no consensus yet on how many yoga classes you need a week for maximum health benefits, but there is agreement that a little over a long time goes a long way.

"The benefits start to accrue," he says. "It's like putting a little bit of money in the bank every day or every month. The payoff comes as these things start to multiply."

Yoga also has emotional benefits, he says. It can enhance moods and increase sexual feelings and pleasure.

"You can see, over and over, people seeing rises in sex hormones — particularly in testosterone — brain waves getting zipped up in the same way that lovers' brains look when they're in deep pleasure," he says. "There have been beautiful studies that show even fast breathing can produce strong states of sexual arousal. And just recently, there were studies in India where they looked at married couples who took up yoga and surveyed them before and after. Across the board, it's improvement in desire, arousal, orgasm, overall satisfaction. Men have better erections. Women feel more emotional closeness with partners. It definitely does lots of good stuff."

Many people who practice yoga see it as a spiritual discipline. In the book, Broad acknowledges that there is much about life that science cannot address much less answer. And, he says, many of yoga's truths surely go beyond the truths of science.

On how studying yoga first piqued Broad's interest while he was working as a student on a research physiology project at the University of Wisconsin, where his findings contradicted something he had learned in his yoga class 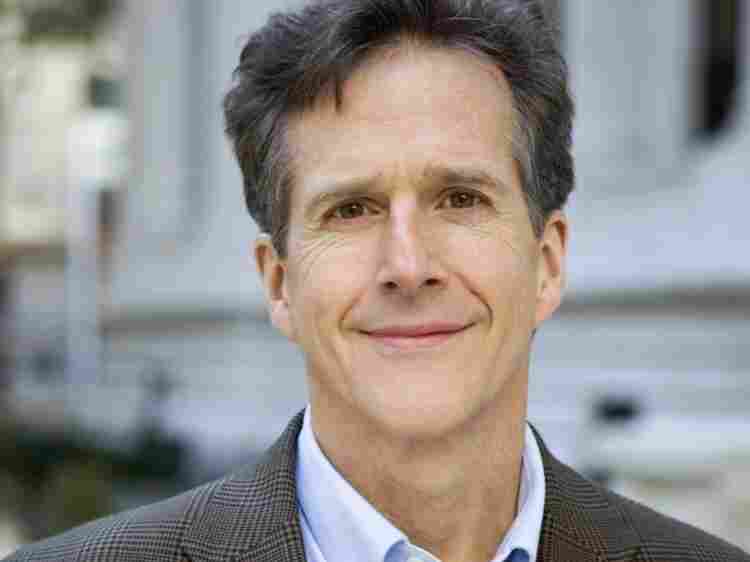 William Broad is a senior writer at The New York Times and a two-time Pulitzer Prize winner. Courtesy of the author hide caption 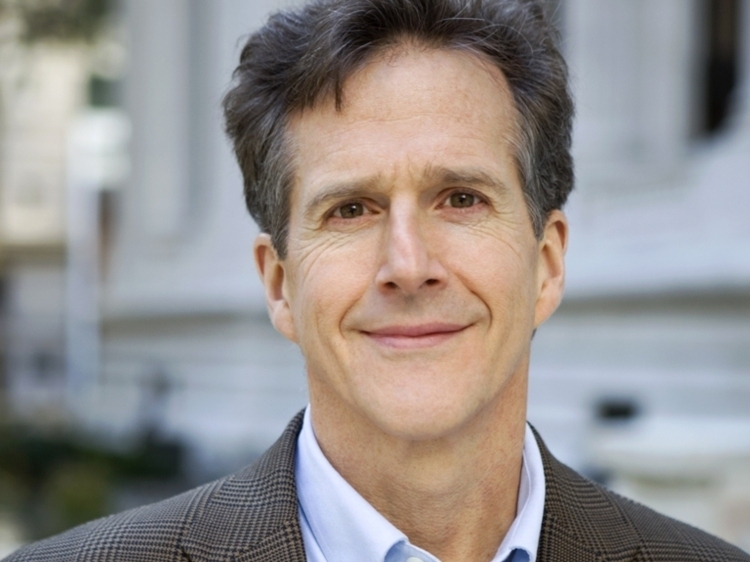 William Broad is a senior writer at The New York Times and a two-time Pulitzer Prize winner.

"I learned that no matter how fast or slow you breathe, you can't change the amount of oxygen that you take into your body. That's contrary to so many yoga teachings."

"Yoga is a beautiful thing in a way, in that it's so free-form, and the spirit of yoga is anti-regulation. But in that, there is tremendous abuse and a huge range. The Iyengar school requires a minimum of two years of study before they will certify a teacher. But it's the Wild West of yoga training out there. You don't even have to go to a studio to get a certification; you can do it online. Now, probably most yoga teachers have had some in-studio certification, but the minimum training is 200 hours. That's not a whole lot. It's a very minimal requirement and in that, in the inexperienced nature of some of these teachers, I think that's where you find some of the biggest dangers in yoga and the biggest dangers of injury. ... The states are trying to start to regulate this, and there are other regulatory moves afoot. I don't know what's right and what's wrong. I do know that yoga teachers hate the idea of red tape, and I don't particularly like it, either. On the other hand, people are paying a lot of money for teaching that's sometimes shoddy."

"One reason I do yoga and enjoy it is because of these de-stressing effects. I spent a lot of time for The New York Times and have done so for decades on these nuclear matters. Iran, compared to lots of nuclear states, is in the kindergarten stage. They're not where the United States or China or Russia or France or Britain or a lot of people are — Pakistan, Israel — but they have been making lots of progress across lots of fields: not just nuclear, but with long-range rockets. And to me, the evidence is overwhelming: There's no question that they're positioning themselves to go for a bomb if they decide to do that. The whole enrichment of uranium that they're doing clearly points in that direction. They're not interested in making reactor fuel — they'd do it a different way if they were. They're developing a capability to get bomb fuel if they decide to do that. They haven't. And guess what — they're not breaking any laws by doing that. The Nuclear Non-Proliferation Treaty lets countries do enrichment and do that kind of stuff. It's only if you divert that material to a bomb-making program that you've violated the law. And they've found no evidence of that."