Accessibility links
A Pulpit For The Masses: YouTube, Christians Click Many have turned to YouTube to express their views about the message of Jesus. At least one has reached biblical proportions. With more than 18 million views, "Why I Hate Religion, But Love Jesus" has become a sensation. 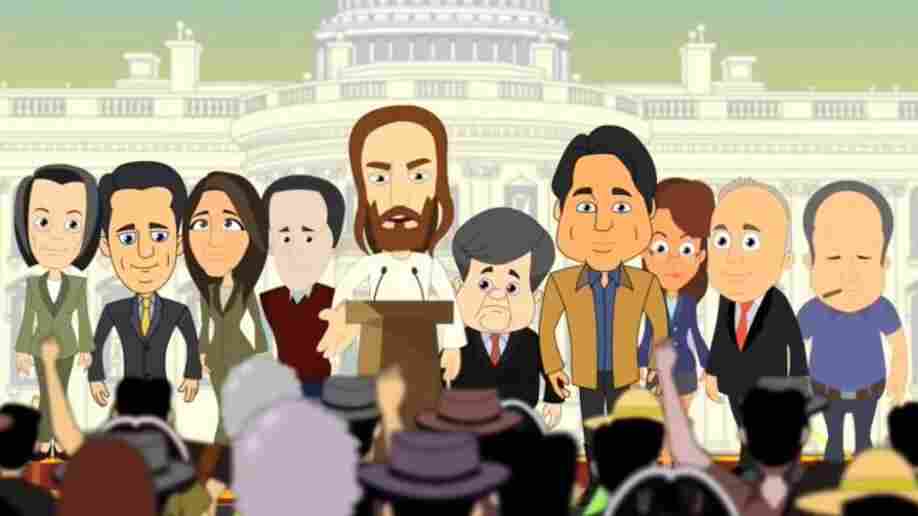 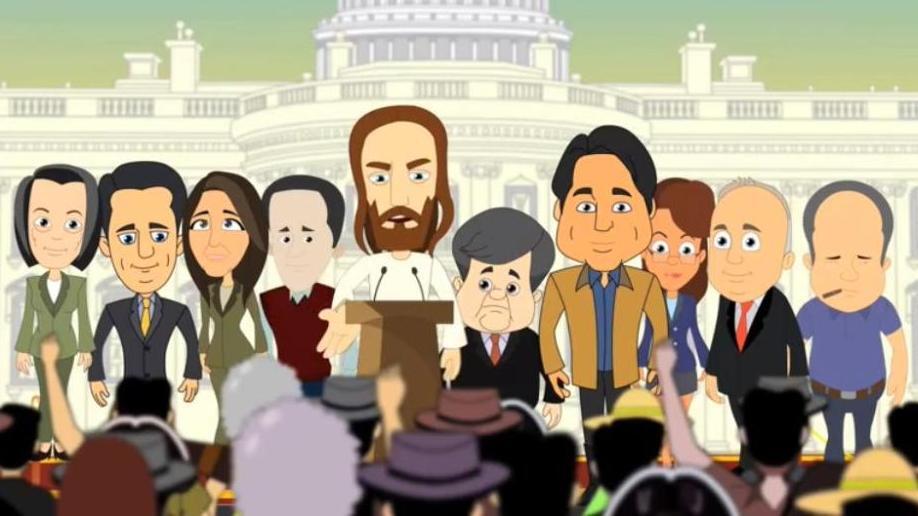 Created by liberal Christians, the YouTube video "Tea Party Jesus" is a spoof on conservative politics.

The video is spare. A young man dressed in leather jacket and jeans looks into the camera. Then, 22-year-old Jefferson Bethke, a churchgoing Christian and rap artist, voices what much of his generation is thinking.

The video is called "Why I Hate Religion, But Love Jesus" and it's a YouTube sensation. In the four-minute poem, which Bethke and his friend shot in a couple of takes, Bethke takes apart religion and religious people for what he sees as their hypocrisy — building churches but not feeding the poor, caring more about rules than about grace.

"Jesus and religion are on opposite spectrums," he says. "See, one's the work of God, but one's a man-made invention. See, one is the cure, but the other's the infection."

Created by 22-year-old spoken word artist Jefferson Bethke, the video "Why I Hate Religion, But Love Jesus" has gone viral on YouTube.

"I was, like, glad that the message I'm so passionate about was out there," he says. "But at the same time, I was like, 'Oh, geez, I don't even want to go to my Gmail and see how many are in the inbox now,' you know?"

With the popularity came some criticism from people who noted that Jesus didn't hate religion — he was an observant Jew — and that the church has been at the forefront of helping the poor.

But Bethke, who graduated from college last year and now works as an athletic director for public schools in Bellevue, Wash., says his Christian friends feel the same way: The church is losing Jesus amid rules and partisan politics. He believes that's why his video went viral.

"I think it was the perfect, succinct example of the division between my generation and the older generation," he says. "And since it was such on a national stage with YouTube, I think it finally gave everyone a reason to talk about it."

And talk they did. More than 200 people made videos in response, and at last count, more than 18 million people had viewed it — not bad for a video about religion, or anything else for that matter.

"No one gets 17 or 18 million hits," laughs Kevin Allocca, YouTube's trends manager.

"They're very unique and engaging, but also they are just very shareable," he says. "And it's not just that you want to share this with someone else and say, 'Hey, check this out.' It's that you say, 'Hey, I want you to watch this, and I want to talk about it with you.' "

Bethke's video makes it clear: Young people not only think differently about their faith, they absorb it differently as well.

Journalist Cathleen Falsani says she saw that when she visited a Sunday school class recently. The teenagers were rowdy, talking over each other and the teacher. Then the teacher played Bethke's video.

"And you could have heard a pin drop in the room," she says. "They were absolutely rapt, they were focused. And then when it was done they had really good questions to ask, they had excellent feedback. It engaged them in a way that I did not think they could be that early in the morning."

"I think the medium is the way, in my world — I'm an evangelical Christian — that I think the Holy Spirit is using to speak to children's hearts."

And to adults. Falsani says she's seeing more videos about religion from all kinds of people trying to sell their version of Christianity to others inside and outside of the church. For example, some liberal Christians recently produced "Tea Party Jesus."

In the South Park-like animation, Jesus delivers a "Sermon on the Mall" surrounded by his followers, including Glenn Beck, Michele Bachmann, Newt Gingrich and Rush Limbaugh.

"Blessed are the mean in spirit, for theirs is the kingdom of heaven," the cartoon Jesus begins, using lines from actual speeches and posters at Tea Party rallies. "Blessed are those who hunger and thirst for lower taxes, for their pockets will be filled."

Liberals are relative newcomers to YouTube Christianity. The path was pioneered by conservatives, notably Molotov Mitchell, a martial arts teacher and the founder of Illuminati Pictures. His video challenging Barack Obama's birth certificate drew about 4.5 million viewers. His short videos, called "For the Record," are highly produced, always caustic, and often offensive.

"Is it unfair to use gay in a negative way?" he asks in one. "I mean, do we have to automatically respect or give special rights to them, based on who they have sex with?"

Another one of his favorite targets is Islam. He states in a video — wrongly, in this country anyway, "It's not that Muslims are less intelligent. They're poorly educated. Islam violently opposes critical thinking, and that's why most Muslims have never even read a Quran."

In fact, Muslim Americans are just as likely to have a college degree as other Americans, according to the Pew Research Center.

Molotov Mitchell, a conservative Christian, offers his views on "Muslim Inventions" in his video blog series, "For The Record."

Mitchell is deliberately provocative, but he is a rising star among conservative Christians, attracting both attention and donations. He says he's only following Jesus' example.

"A lot of people have this picture of Jesus as this emaciated, homosexual guy with blond highlights in his hair, and he would never harm a fly," Mitchell says. "When really, Jesus was far more balanced and righteous than that. Of course, he was loving and compassionate, but at the same time he was also a man. And he would fight."

Something Mitchell says Christian pastors — whom he calls "cowards" — have failed to do. So now, he says, "young people are looking for answers elsewhere. And I think that our success has largely been because I don't pull any punches. I tell it like it is."

No matter what you think of Mitchell's interpretation of Christianity, one thing is clear. Internet videos are changing Christianity, says David Kinnaman, president of the Barna Group.

Kinnaman has surveyed young Christians extensively, and he notes that creating videos is as natural as breathing for young people. So forget about seminary: YouTube allows a martial arts teacher like Mitchell or a recent college graduate like Jefferson Bethke to broadcast their interpretation of Christianity to the world.

"Anyone could be a theologian as long as you're persuasive, able to create a great Internet video, and the luck of the draw that your video gets selected out of the thousands that are uploaded," Kinnaman says.

YouTube is creating a revolution, he says, akin to the printing press, which brought the Bible to every household. Overall, that's a good thing for religion.

"But is there a possibility that this is going to create a new breed of people that are great at performance but light on theology?" he asks. "I think so."

Still, Bethke says the church resists the technology at its peril.

Which Bethke is wasting no time in doing. He posted a video on sex and marriage a week ago. It has more than 3 million hits.