Accessibility links
Alabama's Immigration Law May Get A Second Look As the Legislature begins its regular session Tuesday, one of the big issues lawmakers will take up is the state's immigration law — considered the nation's toughest crackdown on illegal immigrants. Business leaders are driving efforts to modify the law now that some say it could cost the state $11 billion. 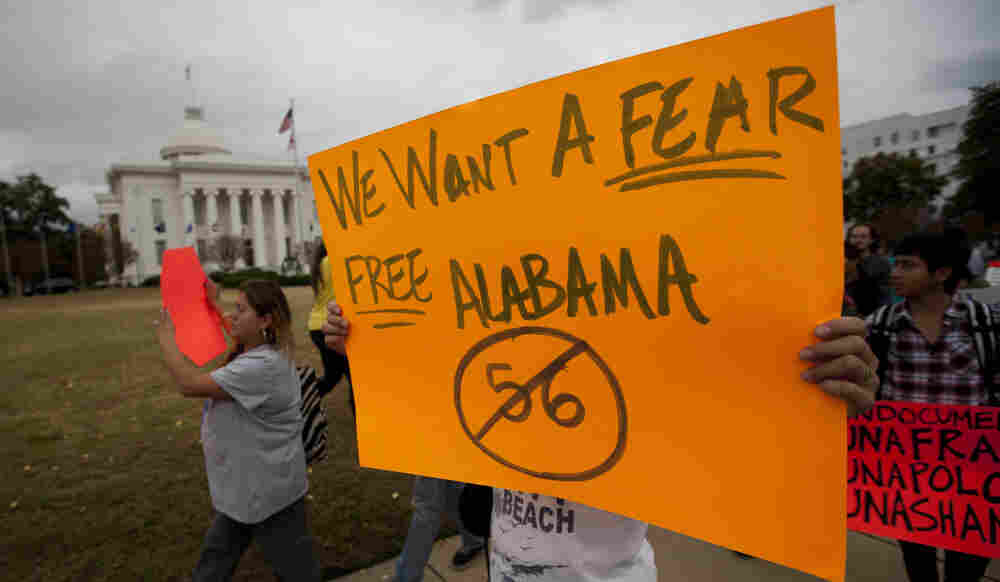 Protesters march outside Alabama's Capitol in Montgomery on Nov. 15 during a demonstration against the state's immigration law. Dave Martin/AP hide caption

Whoever said "all P.R. is good P.R." probably never had dozens of protesters gathered in front of the office calling them "Hitler."

That's what happened during a recent lunchtime in the Birmingham, Ala., business district, as students from several local colleges held a mock funeral in front of a bank. They accuse the company of funding private detention centers where they claim illegal immigrants have died.

"Everybody that voted for HB 56 should be ashamed of themselves," says William Anderson, the University of Alabama at Birmingham student who organized the event. "They should all be pushing for full repeal, not tweaking anything — you can't tweak hate."

He's referring to House Bill 56 — the law the Alabama Legislature passed last year that's considered one of the nation's toughest on illegal immigrants.

The Legislature begins its regular session Tuesday. While it's not likely that the law will be repealed, there is mounting pressure to tweak it. Among other things, the law requires schools to record the legal status of all students, and requires proof of citizenship to renew a driver's license or enter into any government contract.

"The problem the governments have run into is the law is very broad in its definition of contractor or subcontractor," say Cindy Crawford, editor of the Birmingham Business Journal. "So to follow the law and cover all their bases, governments have sent paperwork requests to just about every company they do business with."

It's the law of unintended consequences. Now there are long lines at the courthouse to renew car license tags, while farmers complain of vegetable crops rotting in the fields since workers fled.

Business leaders got caught off guard when the bill passed, and it was quickly obvious that the new law would have a significant effect on economic development, especially after two foreign autoworkers — a German executive with Mercedes-Benz and a Japanese worker at a Honda plant — were detained under the law.

Missouri's St. Louis Post-Dispatch published an editorial inviting companies to relocate to the "Show Me State," not the "Show Me Your Papers" state.

"It's not like business prospects are sounding an alarm and coming to us and telling us that they are rethinking their plans to do business in Alabama," says Brian Hilson, CEO of the Birmingham Business Alliance. "It's the unknown. It's what they're not saying to us."

Hilson says there's no way to know how much business the state is losing, but researchers at the University of Alabama peg the cost at up to $11 billion in lost jobs and income- and sales-tax revenues. State Sen. Scott Beason rejects that number and any efforts to significantly change the law. Beason, a Republican, co-sponsored the original bill.

"If people begin to cave from political pressure, that donors want something changed, they'll have to do it against the vast majority of the people in their district and go with the small special-interest group that makes their decision based on profit," Beason says.

In a poll conducted last week, 42 percent of respondents said they support the law but think it goes too far. Already, several legislators have introduced bills to modify it, and the courts have ruled some provisions unconstitutional.

Still, there's no disputing that supporters of the law have achieved their main goal — driving illegal immigrants out of Alabama.