Accessibility links
Meaningless In Missouri? Not In Santorum's View Former Pennsylvania Sen. Rick Santorum is looking for momentum as Republicans caucus and vote in three states on Tuesday: Missouri, Minnesota and Colorado. And dissatisfaction with front-runner Mitt Romney in Missouri could point to a potential opportunity for President Obama in the fall.

Meaningless In Missouri? Not In Santorum's View

Meaningless In Missouri? Not In Santorum's View 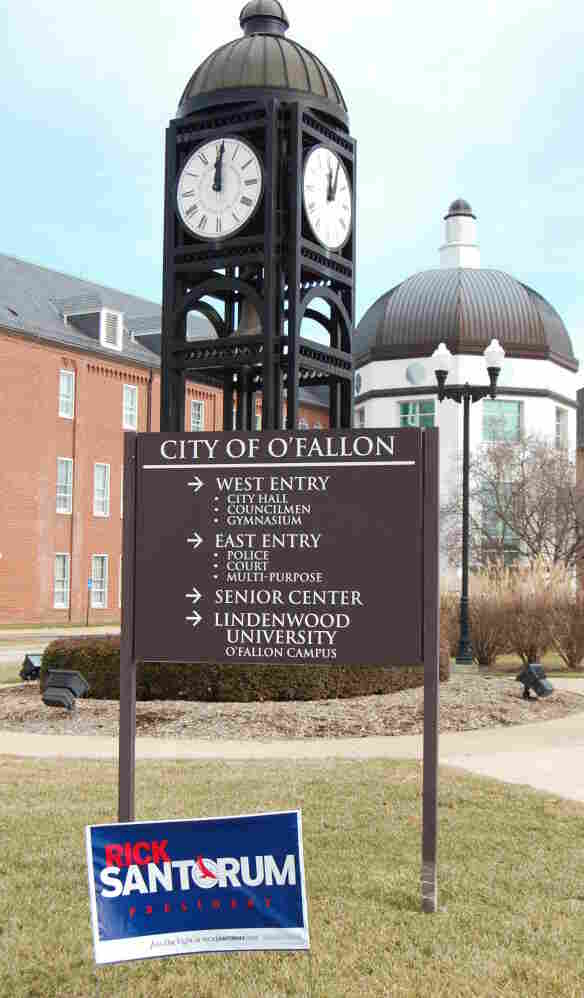 For an election that shouldn't matter on paper, Missouri's primary on Tuesday may carry a lot of weight.

The state's Republican electorate tends to be both populist and conservative. That could give former Pennsylvania Sen. Rick Santorum, who has campaigned in Missouri the most — and the most recently — among GOP presidential candidates, the chance for a strong showing.

"The more conservative people are going to come out for Santorum," says Eugene Dokes, GOP chairman in St. Charles County in suburban St. Louis, which is the state's largest source of Republican votes. "I think Santorum definitely is going to carry St. Charles County."

Missouri's primary is nonbinding — it's strictly a "beauty contest," with the state's convention delegates set to be chosen through caucuses on March 17. And Santorum's main rival for the conservative vote — former House Speaker Newt Gingrich — is not on the Missouri ballot.

But a win or close second-place finish there, added to his momentum in Minnesota and Colorado — which are holding caucuses on Tuesday, and where he has been polling relatively well — could bolster Santorum's claim that he, and not Gingrich, is the true alternative for mainstream Republicans dissatisfied with front-runner Mitt Romney.

"Beauty contest or no beauty contest, Santorum has a real chance to win two out of the three races on Tuesday," says Tom Jensen, director of Public Policy Polling, which has surveyed Missouri Republicans repeatedly. "Even if that's pointless from a delegate standpoint, it might have a huge effect on uniting conservatives nationally around him."

Weak returns for Romney, the former Massachusetts governor, would also signal potential problems in the fall, even if he does end up being the nominee.

Missouri was the only swing state that President Obama failed to carry in 2008 and has been trending Republican. But it's a state where Democrats are starting to like their chances, up and down the ballot.

"You'd think in a year like this, Missouri would be a state Republicans would expect to pick up in the Electoral College," says Marvin Overby, a political scientist at the University of Missouri. "But down-ticket problems with GOP candidates may join with lack of enthusiasm about the [GOP] candidate to make Barack Obama more competitive than he should be, come November."

Missouri used to be considered the most reliable bellwether in American politics. Throughout the 20th century, in every election except one following 1904, Missouri rewarded its electoral votes to the eventual winner.

Compared with Iowa and New Hampshire — or just about any other state for that matter — Missouri better represents the nation as a whole.

Like most of the country, most Missouri Democrats live in dense areas along the "coasts" – the border cities of St. Louis and Kansas City. There's a lot of red territory in between, with the vast majority of the state's 114 counties favoring Republicans.

As in the Deep South, it was the shift among the state's southwestern voters that made Missouri more of a Republican state.

"I told my father-in-law I lived to see the end of Civil War politics in Missouri," says Francis Flotron, a former state legislator. "The last vestiges of the Civil War passed when identically philosophical rural Democrats and rural Republicans stopped voting based on what side their great-granddaddy fought in in the Civil War."

The geographic spread gives Republican lawmakers the upper hand in the state Legislature and Missouri's congressional delegation. Redistricting means that following this year's elections, Democrats are expected to hold just two House seats based in Kansas City and St. Louis, with the GOP controlling the other six.

But statewide races are won and lost in the more populated exurban counties around those cities. Democrat Claire McCaskill targeted voters in predominantly conservative St. Charles County in her 2006 Senate race, cutting into the usual GOP margin there and giving Democrats a road map for survival in the increasingly red state.

She declared victory on election night despite being down 70,000 votes in the statewide count at the time. She had already seen that she had cut her opponent's margin in St. Charles sufficiently to prevail.

Some Republicans believe they have the harder task running statewide, having to cover a broad territory of more than 100 counties while also remaining competitive in the state's major media markets.

The one exception was in 1956, when the state supported Adlai Stevenson, its Illinois neighbor.

But the state failed to extend the same courtesy to another candidate from Illinois, then-Sen. Obama. Arizona Republican Sen. John McCain carried Missouri in 2008 by the narrowest of margins — fewer than 4,000 votes out of nearly 3 million cast.

Still, a loss is a loss. Because Obama's national vote margin four years ago was larger than anyone expects him to enjoy this fall, many are skeptical that he can win a state he lost last time around.

"We used to think that Missouri was right smack in the middle, or among the two or three states that could go either way in an election," says Stu Rothenberg, editor of the Rothenberg Political Report. "It's no longer the bellwether it once was."

Missouri has taken on a "red tinge," as Rothenberg suggests. Republicans swept to huge majorities in both state legislative chambers in 2010 — 106 to 56 in the House, and 26 to 8 in the Senate.

Not only have Republicans carried the last three presidential contests in Missouri, but they have prevailed in the top race on each ballot — whether the presidency or U.S. Senate — every two years since 1998, points out John Hancock, a GOP political consultant in the state.

That is, with the exception of 2006, when Democrat Claire McCaskill unseated Republican Sen. Jim Talent. She won narrowly in what was a strong Democratic year nationwide.

McCaskill's seat is considered a cornerstone for the GOP's hopes of taking back control of the Senate this year. But she is now benefiting from what is generally considered to be a weak field of Republican candidates lined up against her.

The latest polls suggest McCaskill is tied with any of her likely challengers. Democratic Gov. Jay Nixon, meanwhile, attracted even weaker opposition. Nixon is now enjoying a comfortable 20-point lead in polls.

"That sets up a situation where Democrats at the national level could possibly do better than they expected in Missouri six months ago," says Overby, the University of Missouri political scientist.

Overby predicts that Romney, if he is the eventual Republican presidential nominee, will have a hard time appealing to the state's GOP electorate, which has grown more conservative as it has become more dominant in Missouri politics.

"It's hard to see him campaigning all that well in Missouri," says Overby, who notes that the state has a long history of hostility toward Mormons. "So much of the enthusiasm in the Republican Party tends to be on the populist side."

The Obama campaign has not been talking up Missouri as one of its top targets and has yet to devote many resources to the state. Still, polls show him running even there with Romney.

"It's a state where Romney is a hard sell," says Jensen, the pollster. "We've polled Republicans four or five times over the past year and Romney never does well. Whenever there's a flavor of the month among Republicans, he's always ahead of Romney."

Most analysts still expect Missouri to end up in the Republican column come the fall. If Obama does manage to win the state, it will be a sign that he's going to win a big victory nationwide.

"It's going to be hard — it's going to be the hardest election we've ever had in our lifetime," says Maxine Rader, GOP chairwoman in Barton County in western Missouri, which gave 74 percent of its vote in 2008 to McCain.

"But we're going to stay in there," Rader says. "That's the only thing I know."