Accessibility links
'Shake-And-Bake' Meth Causes Uptick In Burn Victims With easy access to ingredients and a simplified brewing process, more and more methamphetamine addicts are making the drug themselves — and many of them are turning up in hospital burn units from meth-related accidents. 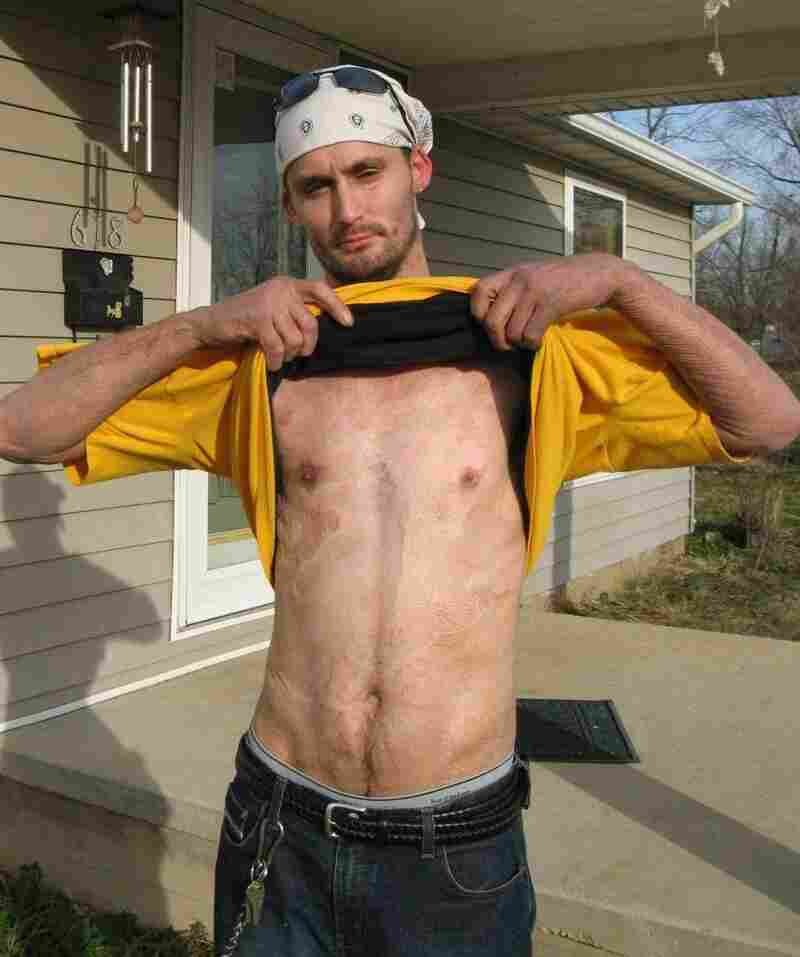 Dennis Potter, 29, was burned in a shake-and-bake meth lab explosion in December 2009. He spent the next five weeks wrapped in bandages and underwent numerous skin graft operations over the course of his recovery. Veronique LaCapra for NPR hide caption 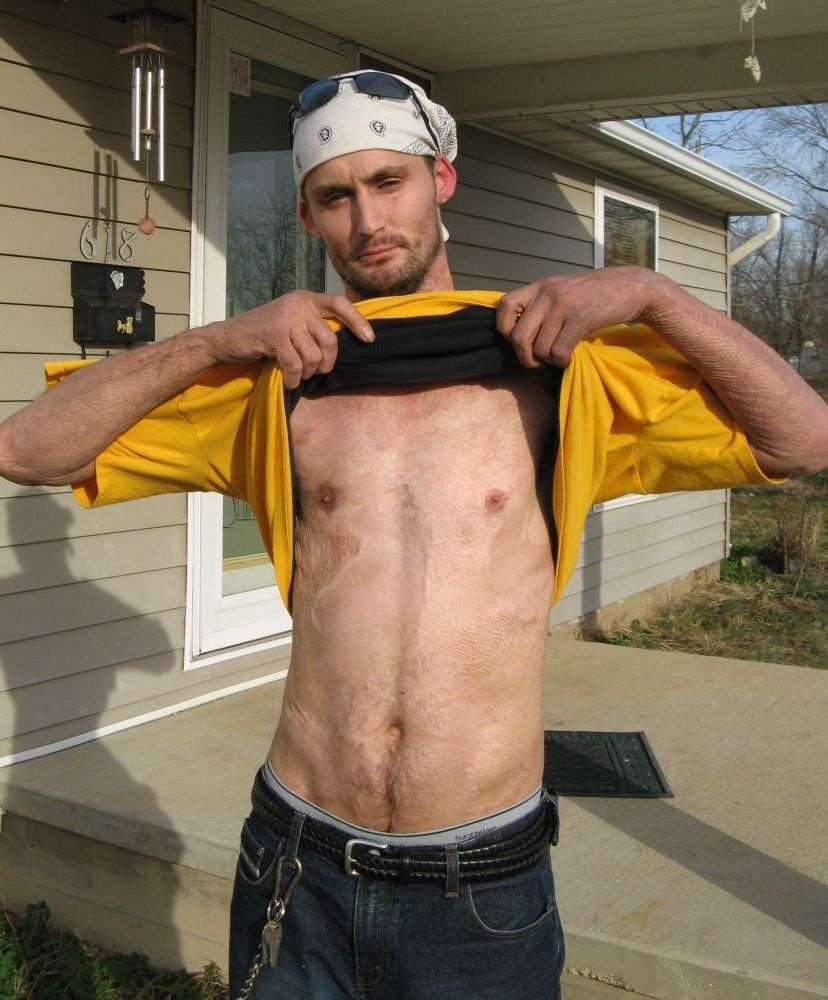 Dennis Potter, 29, was burned in a shake-and-bake meth lab explosion in December 2009. He spent the next five weeks wrapped in bandages and underwent numerous skin graft operations over the course of his recovery.

Dennis Potter says he started doing meth when he was 16. Two years later, he learned how to make it.

"It's so easy," he says. "Any person can do it. You can go to Walgreens, Home Depot and Wal-Mart, and they sell every bit of the ingredients."

Those ingredients include things like drain cleaner, lithium batteries and pseudoephedrine — a decongestant in cold medications such as Sudafed. Easy access to these ingredients means more methamphetamine addicts are making the drug themselves. They're using a method known as "shake and bake" — and often winding up in hospital burn wards.

According to Potter, the shake-and-bake method involves mixing everything together in a plastic bottle and then shaking, cooling and venting the container as you go. Do it right, and you end up with at least several grams of meth in less than an hour; do it wrong, and you can find yourself holding an explosive fireball of corrosive chemicals.

Potter says he knew the risks, but he'd made meth a thousand times before with no problems. Then one night he was teaching a friend the shake-and-bake method, and something went wrong. The bottle took on an orange glow, and within seconds an explosion blew the walls off the room and set Potter on fire.

The Intimacy Of 'Shake And Bake'

Potter spent the next five weeks wrapped in bandages, trying to recover at the burn unit of Mercy Medical Center in St. Louis. Dr. Michael Smock, director of Mercy's burn unit, says over the past few years he's been seeing more cases like Potter's.

"As best as we can tell, since we've been trying to keep track of these numbers, we think it's about 35 patients a year," he says, or 15 percent of Mercy's total burn patients.

Over at the Vanderbilt University Medical Center burn unit in Nashville, Tenn., Dr. Jeffrey Guy says their number is closer to 30 percent. He says that because the shake-and-bake method is so easy, more people are trying to make their own meth — and getting hurt in the process.

"We're seeing people that are probably quite a bit more amateur methamphetamine producers," Guy says. "The burns are typically always involving the hands and the arms, and in the more severe cases, the chest, face and with severe inhalation injury."

Guy blames those close-quarter injuries on what he calls the intimacy of shake and bake.

"You're basically holding the lab inside a two-liter bottle, which you're holding close to your body much like you'd cradle a football," he says.

The Rise Of The Meth Lab

In 2006, the federal government moved to curb meth production by restricting consumer access to pseudoephedrine, the drug's key ingredient. The law put products like Sudafed behind the pharmacy counter and limited the amount that any one person could buy. 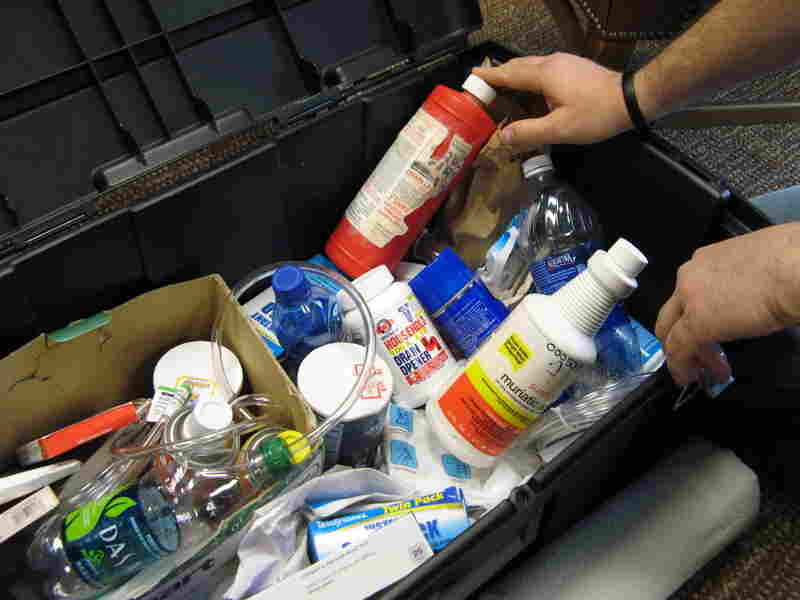 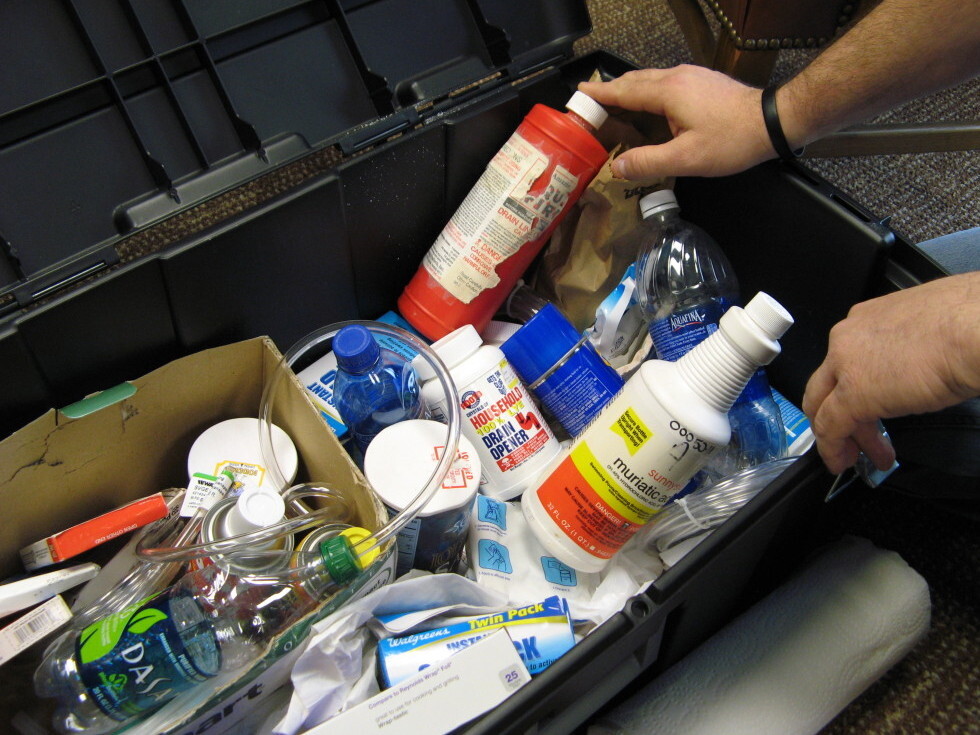 Meth lab numbers did fall for a couple of years. But then, says narcotics detective Jason Grellner, came shake and bake. Grellner works in Franklin County, about an hour west of St. Louis. He says the new method allows addicts to make their own meth anywhere with just a handful of cold medication.

Despite lobbying efforts by the pharmaceutical industry to protect consumer access, two states — Oregon and Mississippi — now have prescription-only laws on the books, and both have seen their meth lab numbers plummet.

Dennis Potter says changing the law wouldn't have stopped him. He started making meth again not long after leaving the hospital. Now, he regrets it.

"I wish I never learned how," he says. "It haunts me daily because I do know how to do it."

Potter insists he hates meth. He's been clean for about six months now, but admits he misses it every day.