Accessibility links
Detroit Schools' No. 1 Mission: Getting Kids To Class Dismal attendance rates have put Detroit Public Schools at risk of losing vital state funding, so the city has launched an assault on truancy. Attendance agent George Eason says, "If we see that the parent is willfully ... not sending the child to school, then we will take every means necessary to enforce the law." 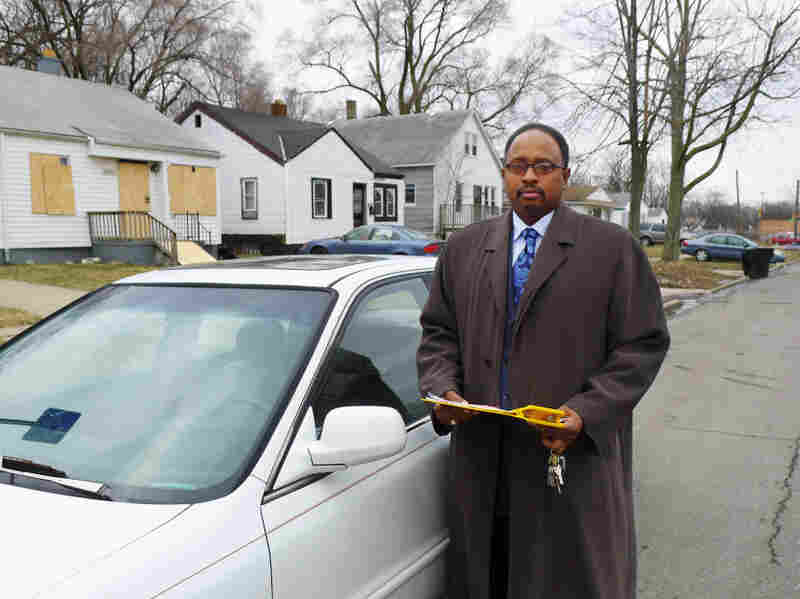 George Eason, an attendance agent with Detroit Public Schools, sets out to visit homes and check in with parents about school attendance. Larry Abramson/NPR hide caption 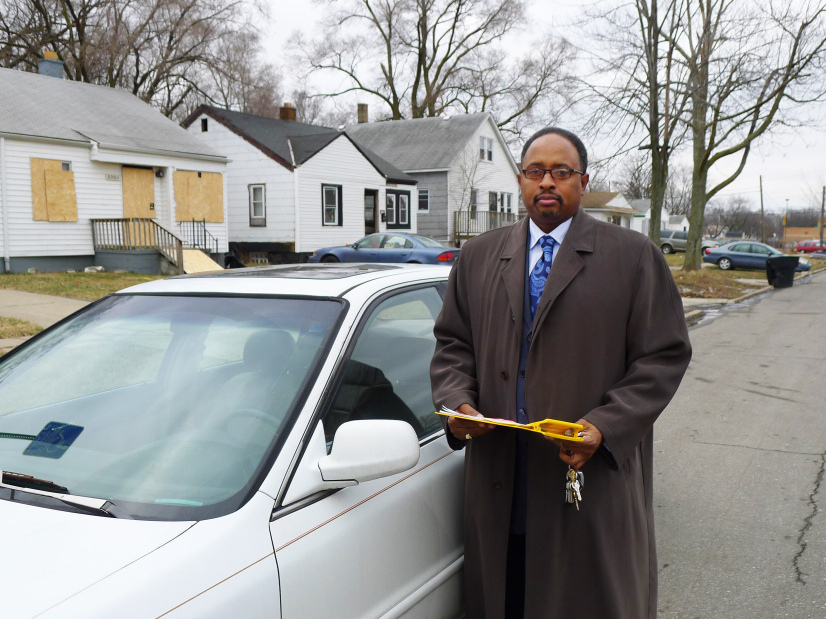 George Eason, an attendance agent with Detroit Public Schools, sets out to visit homes and check in with parents about school attendance.

Ask Detroit teachers about their biggest challenge, and many will say, "You can't teach kids who don't come to class." Last year, the average Detroit public high school student missed at least 28 days of school.

Now, as part of its effort to get parents more involved, the district has launched a major initiative to improve attendance. The effort includes parent workshops and attendance agents charged with pushing parents to send their kids to school every day.

George Eason is one of Detroit's 51 attendance agents. He's staring at a printout that says a lot about the city's attendance problems. He flips the pages, counting the absences that one student has racked up only midway through the school year.

"To date, this student has 23 absences," he says, "and a couple of suspensions."

As an attendance agent for Detroit Public Schools, Eason covers the city's border with Dearborn, Mich. He says most parents want their kids in school — they just need a little help. Others need a good strong shove.

"We do take parents to court, depending on the dynamics of the case," he says. "If we see that the parent is willfully keeping the child out for things such as babysitting or whatever, and not sending the child to school, then we will take every means necessary to enforce the law."

A Landscape Of Closed Schools

Detroit To Parents: Time To Get Involved In Education

Eason gathers up his attendance records and climbs into his trusty Honda. On the way to his first stop, he points out school after school that was forced to close as the city's population contracted. He says that when he started this job 18 years ago, Detroit Public Schools had more than twice as many students as it has today.

When schools close, children have to travel farther to get to class. On some days, they might not show up at all. And as learning suffers, so do district finances: DPS stands to lose millions in state funding because of attendance problems over the past two years. But they hope to do better this year.

At his first destination, Eason climbs the steps to a white clapboard house. He wears a suit, tie and a topcoat. He says he wants to look professional and be courteous.

The first parent is glad to see him. It turns out that her three kids haven't been coming to school because they need clothing, among other things.

"So who needs glasses?" Eason asks.

"All three of them do," the mother says.

This family just moved in. The mother says she could afford to buy bedding, but not much else. According to Eason, many families are too ashamed to send their kids to school in tatters, so he gives her vouchers that will help her get clothes and glasses.

"You should be good to go," he says, smiling.

Once they have the basics, these kids are more likely to make the trip to school.

Attendance Is The Law

The next house is a different story. When a teenager opens the door, music blares out and a clutch of little kids peers out through the storm door. At first, a couple of teenagers insist that mom's not home. Then she suddenly appears, armed with excuses about why an older son didn't show up at school.

"Why was he out today?" Eason asks, his friendly demeanor giving way to a sharper tone. The mother scowls suspiciously at him.

" 'Cause I overslept," she says. "Why do they report every time my kids miss a couple days?"

Eason shows her the record of her son's many absences. When she continues to protest, he simply tells her that attendance is the law.

In the end, Eason leaves the family with a warning, but the situation is unresolved. He'll have to take one approach to get the mother to play ball, but he may need another tack with the teenage son, who is refusing to go to school.

Eason says he prefers to work with parents rather than turn to legal action, which can take a long time. But in this case, he doesn't have many options.

"Now I have to file a formal petition," he says, "[and it's] a matter of time before the courts pick him up or catch him out on the street."

While some families are defiant, many just break your heart. The final visit of the day takes Eason to a rough-looking motel miles from his home school.

A young mother opens the door. The motel room is stuffed with kids, clothes and snacks. Four young children peer out of the gloom. Three of them should be in school, but the family has been evicted from their home. Besides, the mother has other reasons to be overwhelmed.

Barely visible in the clutter is a pair of 2-month-old twins. The woman asks how she's supposed to take this brood to school by bus; and that's just one reason she can't get her kids to class on time.

Eason promises to do what he can to help. But since the family has no idea where they'll be living from day to day, it won't be easy.

"See you all later," he tells her. "Take care of them babies."

Back at Jemison Elementary, Eason's home base, Principal Coy Lynn Robinson points to her January attendance chart. She says the numbers are improving, thanks to Eason and the district's other efforts to get parents involved. But it's still a struggle.

She shows me that her attendance numbers are frequently close to 90 percent. But sometimes educating parents about the importance of attendance seems more difficult than reaching students who are already in class. When holidays like Martin Luther King Jr. Day pop up, many families take an extra-long weekend, and Robinson's numbers drop into the mid-60 percent range.

Little things like that make it tough for Eason and DPS to get their simple message across: Come to school on time, all day and every day.