Accessibility links
For Love AND The Game: Elena Delle Donne Shines In Delaware Basketball Four years ago, Elena Delle Donne was the top basketball recruit in the country. But Delle Donne walked away from an elite college program — so she could be with her severely disabled sister and the rest of their family. Now she's the best college player in America. 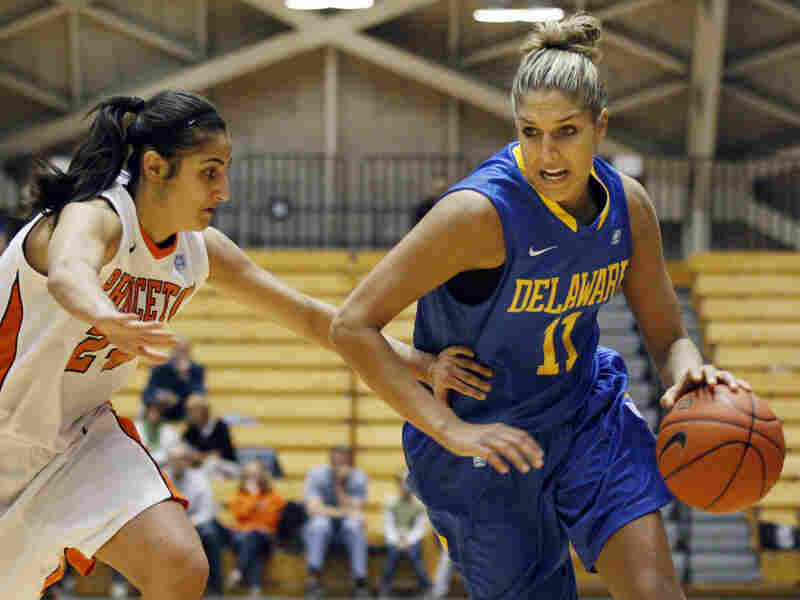 Delaware's Elena Delle Donne, seen here during a game against Princeton, made headlines when she turned her back on the University of Connecticut. Mel Evans/AP hide caption 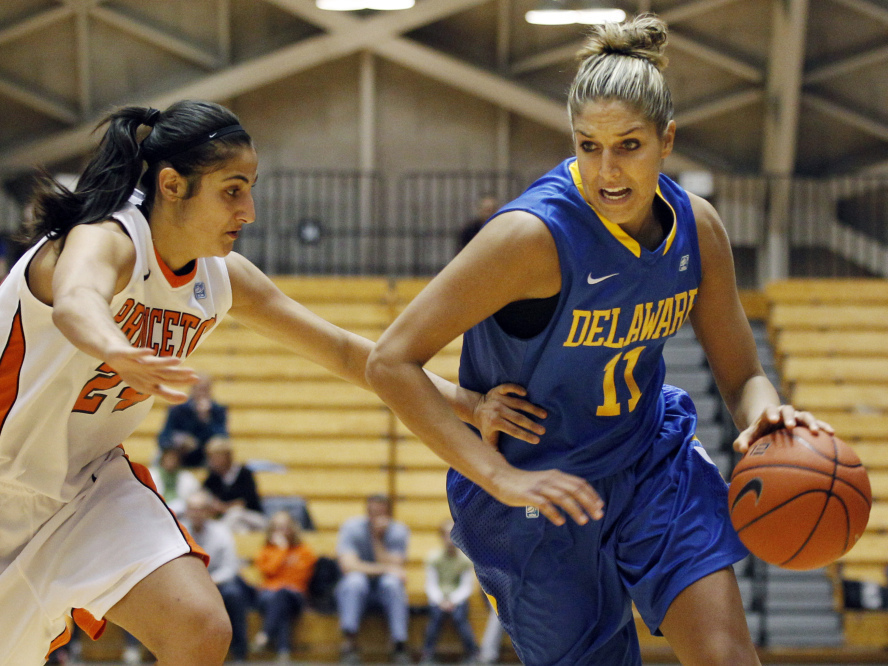 Delaware's Elena Delle Donne, seen here during a game against Princeton, made headlines when she turned her back on the University of Connecticut.

Imagine being not only the best high school player in the country — probably the world — and signing to play for the best college program in the country, but then walking away from the sport. Why would any kid do that?

But, of course, Elena Delle Donne did exactly that, and the reason she did is simply that she did not want to be away from her older sister.

For as much as Elena has been blessed with the greatest of gifts in this mortal world, Lizzie Delle Donne was, in horrible contrast, denied most of the physical joys of life. She was born both without sight and without hearing, and with cerebral palsy. She only knows her kid sister by the special way she touches her, by her hugs and kisses, and by her scent. Lizzie is 27 now, and she will never overcome what fate so cruelly gave her.

Four years ago, when Elena went off to the University of Connecticut as the prize women's basketball recruit in the country, she was there only two days when she realized that regardless of how good she was, and notwithstanding how many championships she would win at UConn — no, never mind what glory she found in the game she dominated — it would mean nothing if she could not be there to give her sister what love Lizzie could understand.

And so Elena went back home to Delaware. She enrolled at the state university, nearby in Newark, and she did not even play basketball for a year. Now, as a junior, she is the best college player in the country, the leading scorer, and Delaware, what's called a mid-major, has lost only one game all year, that on the road to eighth-ranked Maryland. The Blue Hens themselves are now ranked 12th.

Elena is 6 feet 5 inches, but she can play like a guard. In high school she made 80 free throws in a row. As the star this past summer on the U.S. team that won the gold medal in China at the World University Games, she led the American team not only in total scoring and rebounds but also in 3-point baskets.

Because of how good she is, her college recruitment was very intense — so much so that it all but ended her passion for the game, as likewise it crystallized, in her mind, how important something else was.

The only story that remotely resembles Elena's is Larry Bird's — he who went to Indiana University, left as a freshman, went home and, famously, worked on a garbage truck before returning to a smaller college to lead the mid-major Indiana State to the national final. But Bird was not that well-known as a prospect, and he left Bobby Knight's team because he was homesick and uncomfortable on a big campus.

But for Elena, it was not a matter of leaving anywhere. No, it was only a matter of wanting to be somewhere, with someone where she thought she was more valuable, where she mattered more in life and love.

The audio version of this story incorrectly states that only two mid-major teams — the men's basketball teams from Butler and George Mason universities — have made it to the Final Four. There have been more, including in 2011, when Virginia Commonwealth University reached the tournament playoff.