Accessibility links
Afghans Worried About Early Exit Of French Troops France's plan to withdraw from Afghanistan a year ahead of schedule is of particular concern in a small province near Kabul. Local authorities say the 3,900 French troops deployed there have held an important line against the Taliban, and that an early exit could plunge the area into crisis. 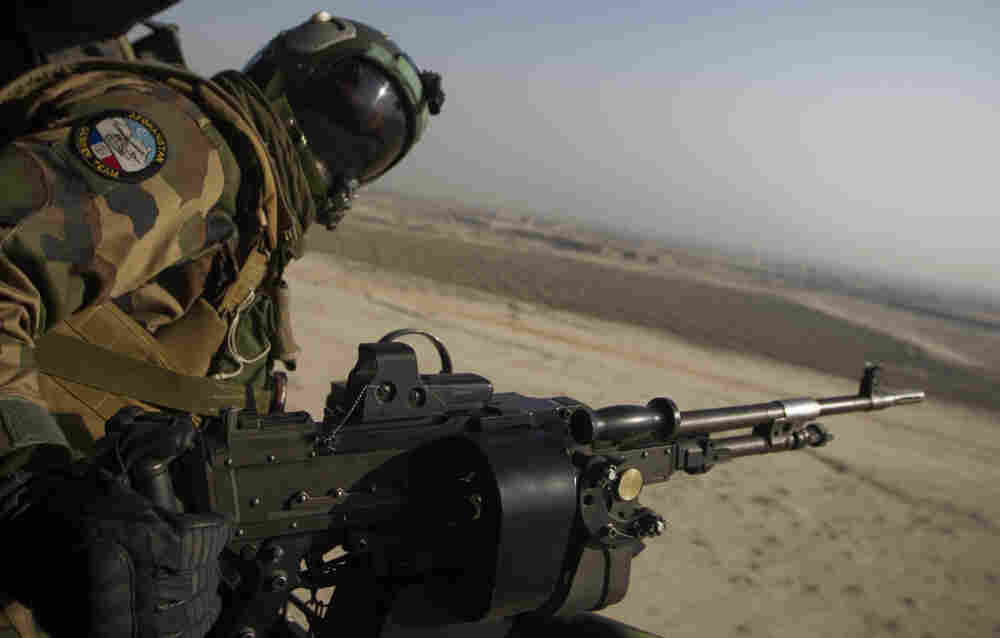 A French gunner mans a machine gun in a Puma helicopter as it flies over Afghanistan. French President Nicolas Sarkozy recently ordered the withdrawal of all French troops from the country a year ahead of schedule. Joel Saget/AFP/Getty Images hide caption 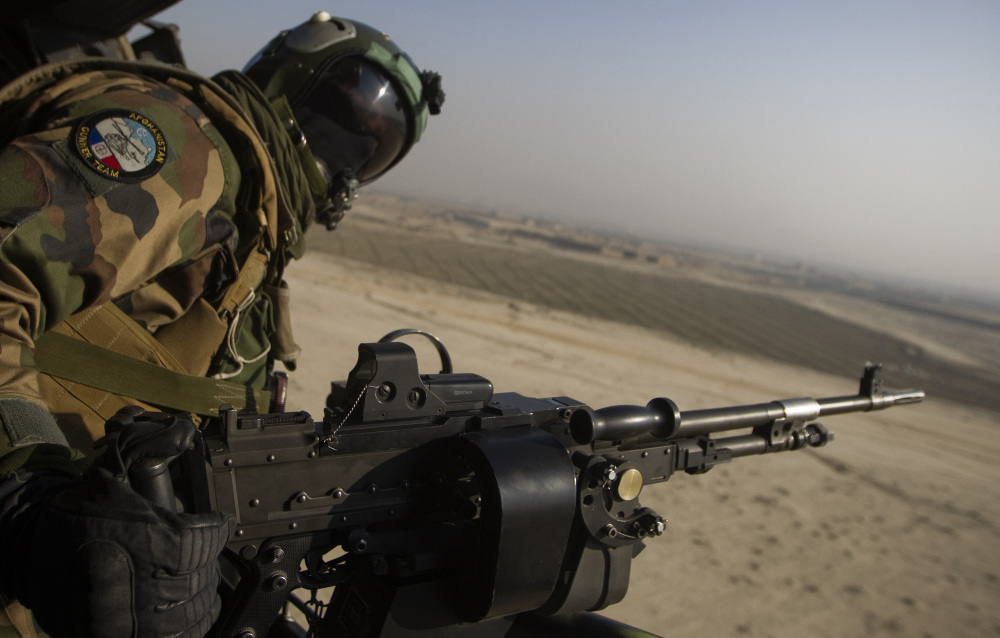 A French gunner mans a machine gun in a Puma helicopter as it flies over Afghanistan. French President Nicolas Sarkozy recently ordered the withdrawal of all French troops from the country a year ahead of schedule.

Uncertainties surrounding the future of the NATO mission in Afghanistan are of particular concern for an area near Kabul that French troops have controlled for the past decade. France now plans to withdraw its army a year ahead of schedule, sparking fears of a potential crisis in Kapisa province.

On a plateau amid the towering Hindu Kush mountains, Hukum Khan, a 31-year-old Afghan farmer, says the presence of French troops hasn't made much difference in his life in the past 10 years.

Khan has brought his horse to a scenic bridge in Kapisa. Unable to farm during the winter, he rents the horse to visiting tourists who have come from Kabul, about 60 miles to the south. He says if the French really wanted to help now, they should go after the corrupt officials in his province.

But local authorities say the 3,900 French troops deployed in Kapisa have held an important line against the Taliban.

Not Ready To Defend Alone?

With their superior weaponry and better tactics, the French have prevented the Taliban from opening a northern front in their campaign to surround Kabul, according to Muhajir Agha, a local police officer.

Agha concedes that Afghan security forces are not ready to fill the gap if the French leave anytime soon. He thinks it will be at least two years before his comrades will be ready to defend Kapisa alone.

But France recently announced it will pull out all combat troops by the end of 2013, a year earlier than other coalition forces. The move came after four French troops were killed by a rogue Afghan soldier on Jan. 20.

The French decision came as a surprise, says Hussian Khan, the head of the provincial council in Kapisa, and has left many of his constituents feeling betrayed and abandoned.

"You can't fight a war if you think there will be no casualties," Khan says. "We were not expecting such a shameful reaction from a highly developed country like France. They should step up their fight, not just retreat so disgracefully."

A member of the Afghan Parliament from Kapisa, Mohammad Farouq, says the Taliban is strong in three districts in the southeast of the province, despite many joint Afghan and French military operations against the insurgents.

"A premature withdrawal of French troops will lead to a crisis in this area," Farouq says. "This is not the right time for them to leave. We do not have the forces to replace them right now to stop the enemy."

Farouq is afraid the French decision might prompt other NATO countries to follow suit, leaving the Americans to do most of the combat.

Washington, D.C., says Afghan security forces are growing rapidly and will be able to assume security responsibilities once France pulls out, but there is still doubt for some in the province.

A local council member, who did not want to be named, says when the Soviets invaded Afghanistan more than three decades ago, the French were quick to lend a helping hand because Europe's security was threatened. Now that Kapisa, one of the smallest provinces in Afghanistan, is threatened by a resurgent Taliban, he says, the French are leaving them out in the cold.