Accessibility links
Afghans Hedge Bets Amid Mixed Messages From U.S. U.S. and Afghan officials have resumed talks on a deal that will determine how many American troops stay after the NATO mission ends. But until a deal is signed, it's hard for Afghans to know what's ahead, and the uncertainty may be helping the insurgents. 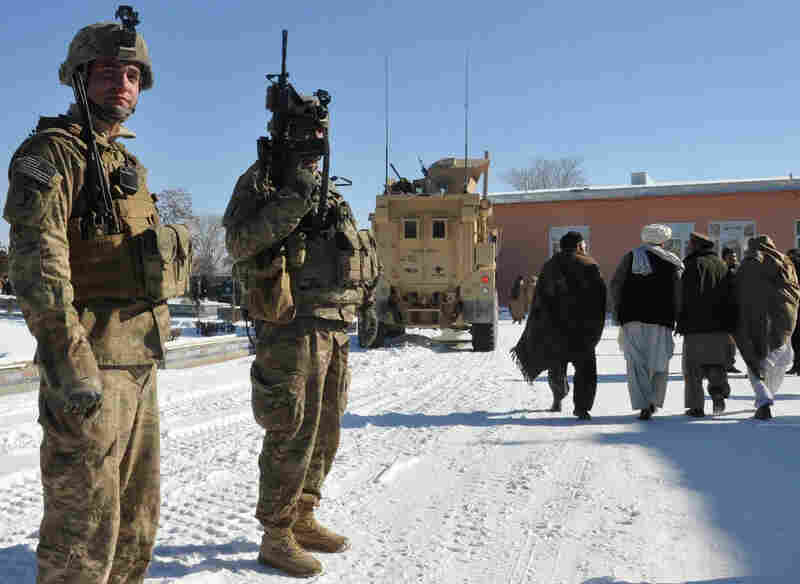 Afghan men walk past American soldiers in Ghazni province on Thursday. U.S. and Afghan officials are in talks that will determine how many American troops stay in Afghanistan after the NATO mission ends in 2014. AFP/AFP/Getty Images hide caption 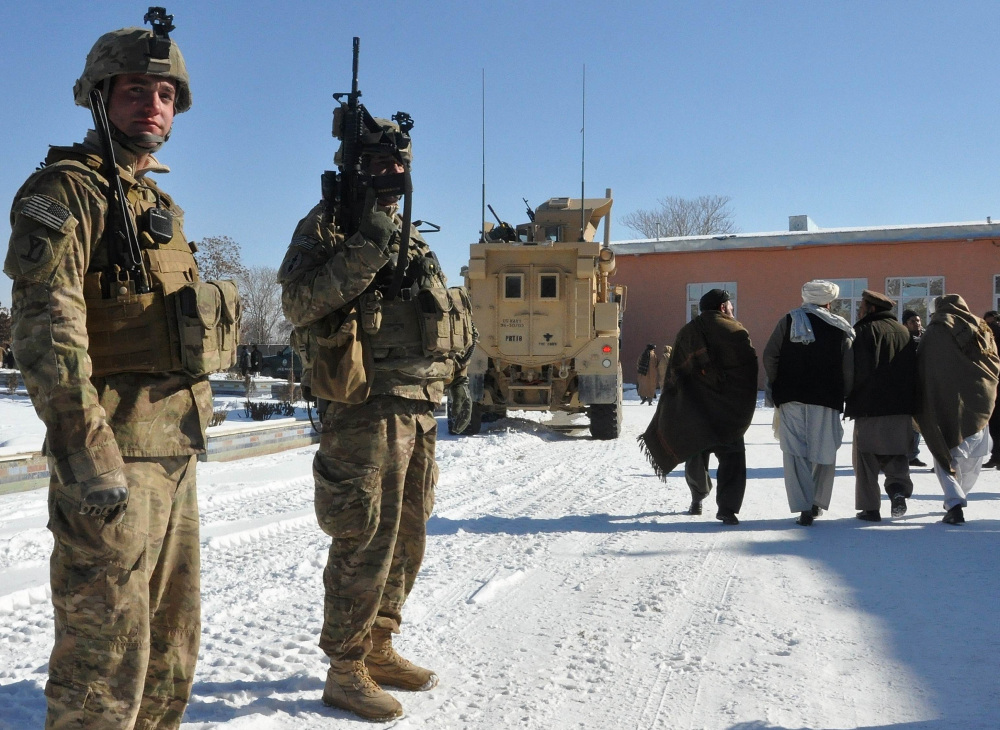 Afghan men walk past American soldiers in Ghazni province on Thursday. U.S. and Afghan officials are in talks that will determine how many American troops stay in Afghanistan after the NATO mission ends in 2014.

After a long hiatus, the Afghan and U.S. governments this week reopened talks on a strategic partnership that will determine how many American troops stay in Afghanistan past the end of the NATO mission in 2014.

The resumption of talks comes amid a flurry of contradictory statements from U.S. officials and NATO members about the shape of the foreign mission in Afghanistan. When President Obama first arrived at the White House, he said troops would begin pulling out in the summer of 2011. Then a NATO meeting pushed the end of the mission to 2014. Last week, Defense Secretary Leon Panetta muddied the waters further, suggesting that the U.S. combat mission might end by 2013.

"Frankly, we're not confused about it," he says. "We have always maintained that Afghan security is an Afghan responsibility."

Mosazai says the transition will be "conditions-based" and gradual, to be completed by the end of 2014. If conditions allow foreign forces to leave sooner, that would be welcome news, he says, but Afghanistan will need international support for many years to come. The partnership agreement that Kabul and Washington are still hammering out will specify the type of support.

Until that deal is signed, though, it's hard for Afghans to know what's ahead, and the uncertainty may be helping the insurgents.

U.S. Marines are credited with pushing the Taliban out of the Marjah district of southern Helmand province. As the forces pull out now, tribal elder Haji Khalifa Mohammad Shah says a strategy for security hasn't been made clear.

Shah says he is hearing too many messages at once — from the Afghan government, from the U.S. and from other NATO governments.

He quotes an Afghan proverb: "With too many midwives, the baby comes out backward." Shah is blunt about what he's doing: His tribe is reaching out to both the Taliban and the government because he's not sure which one will prevail if and when American troops leave.

Khalid says the mixed messages leave many Afghans unable to feel confident about the future. Estimates about how many American troops will remain range from 5,000 to 30,000, he says. The size of the Afghan force after 2014 is also unknown; NATO governments recently began to lower the estimate of how large an Afghan army and police force they are willing to finance.

Khalid blames some of the confusion on election-year politics in the U.S. and elsewhere, which he says can make politicians say almost anything. In the meantime, he says, the Taliban are spreading the word about their planned return in 2014.

This week's resumption of talks is a step toward answering some of the many outstanding questions. Both sides are pushing for an agreement in time for a NATO summit in Chicago this May, at which point Afghans and Americans should have a much clearer picture of how many U.S. troops are staying in Afghanistan for the long term.