Accessibility links
'Amasia': The Next Supercontinent? More than 100 million years from now, the Americas and Asia might fuse together, squishing the Arctic Ocean shut in the process. That's according to a new model that predicts where the next supercontinent may form. But don't worry: Humans will likely be long gone by then.

The Earth's continents are in constant motion. On at least three occasions, they have all collided to form one giant continent. If history is a guide, the current continents will coalesce once again to form another supercontinent. And a study in Nature now shows how that could come about.

You can think of continents as giant puzzle pieces shuffling around the Earth. When they drift apart, mighty oceans form. When they come together, oceans disappear. And it's all because continents sit on moving plates of the Earth's crust.

Then, Now And Future

A new model of continental drift predicts that the next supercontinent could form near the North Pole — in another 100 million years or so. 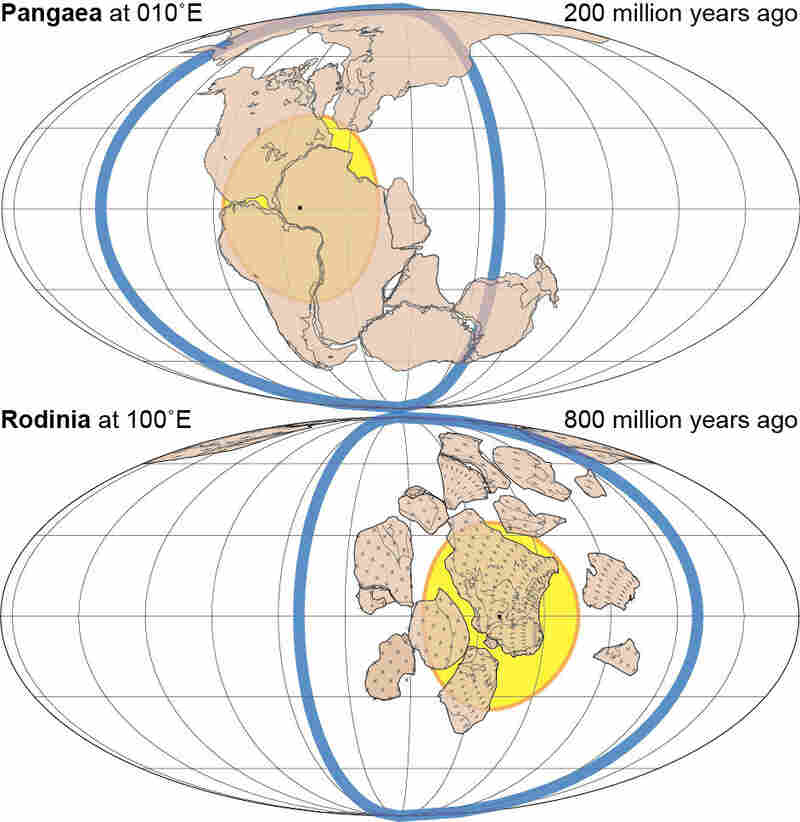 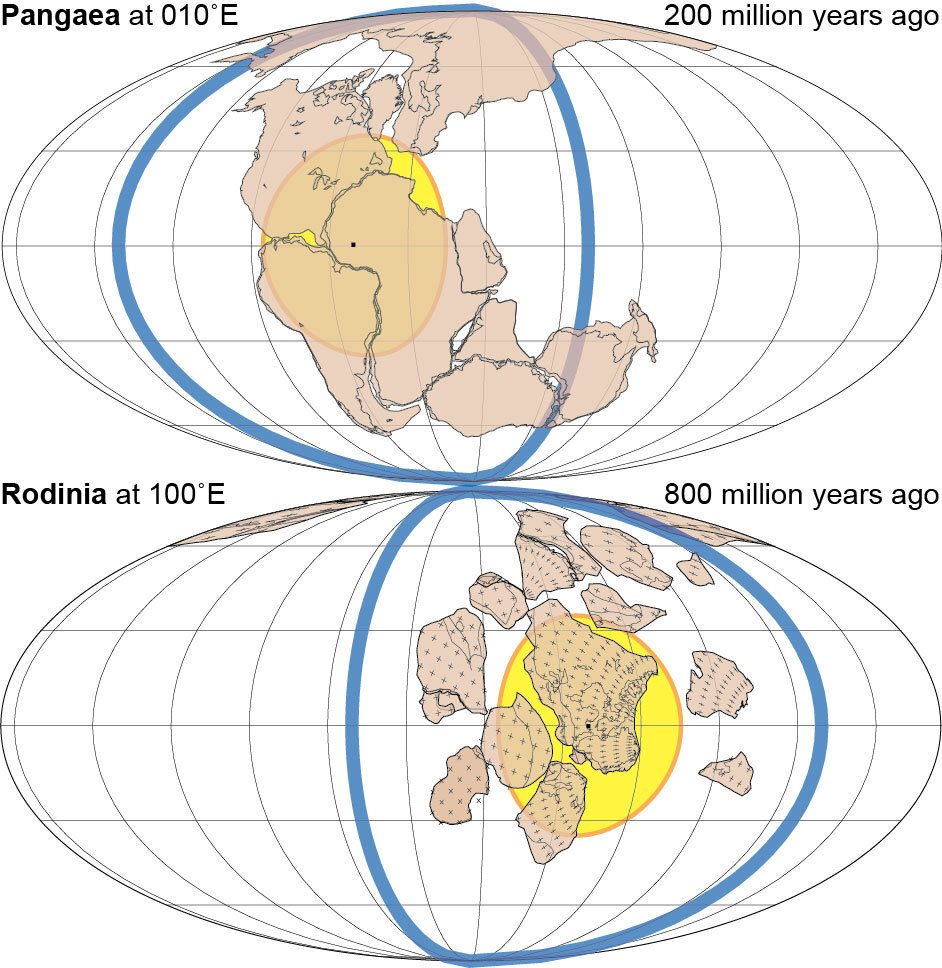 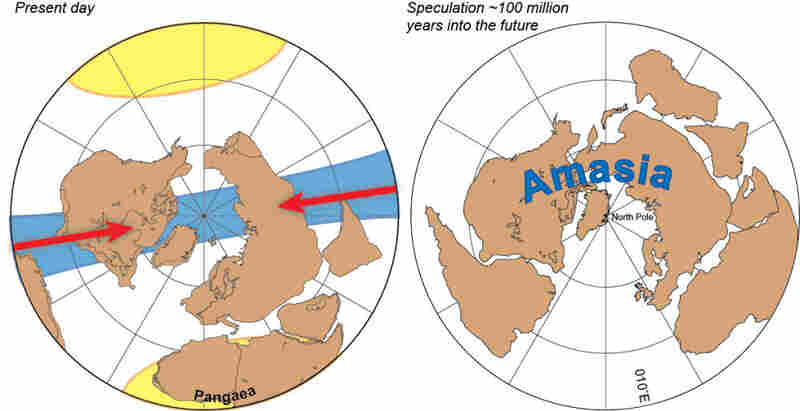 The Americas and Asia may fuse together to form a new supercontinent, "Amasia." Mitchell, et. al./Nature hide caption 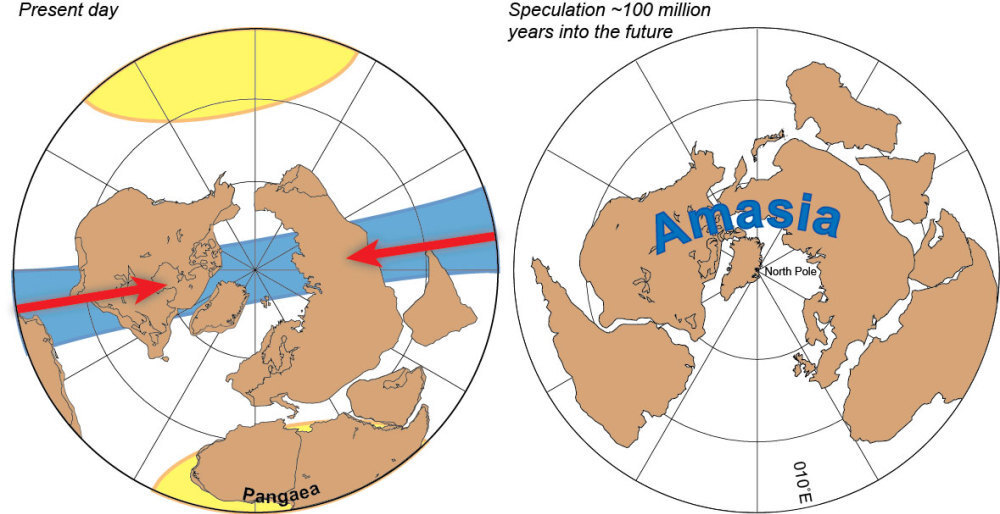 The Americas and Asia may fuse together to form a new supercontinent, "Amasia."

"Continents on these plates typically move, I would say, at the rate your fingernails grow," says Ross Mitchell, a graduate student at Yale University. That may seem slow, but it adds up over hundreds of millions of years.

Look at an atlas and you can imagine how Africa and South America, for example, once nestled together.

"Rewind the tape and bring all the continents back into their jigsaw arrangement, you have this vast landmass of all the Earth's continental blocks together," Mitchell says.

Last time all the landmass clumped up, it formed a supercontinent called Pangaea. The dinosaurs walked there. But Pangaea wasn't the first.

"There had been three, possibly a debated fourth supercontinent through the billions of years," Mitchell says.

He has been studying that deep history by looking at tiny magnets buried in rock around the world. Those magnets pointed north when they were locked into the rock. Sample those magnets in layers of rock laid down over millions of years, and you can tell the story of how those continents have moved.

And naturally, that led Mitchell to wonder what the next supercontinent will look like.

There have been two leading ideas. One is that the continents will collapse together again at the site of the last supercontinent, centered on Africa. That would squeeze the Atlantic Ocean shut. The other idea is that the Atlantic would keep growing and growing.

That would leave us with a supercontinent in place of the Pacific Ocean.

But Mitchell's research for his Ph.D. thesis suggests both those ideas are wrong. Instead, he says the continents seem to be moving north. That means the Caribbean Sea and the Arctic Ocean will be squished shut.

"Think about closing the Caribbean Sea — you have now fused North and South America," Mitchell says. "And then by fusing the Arctic Ocean, you would suture the Americas with Eurasia."

The land on Earth is moving, but slowly — about as fast as your fingernails grow. If we turn the clock back 850 million years, we can see how the continents grew apart and back together several times.

That would create a supercontinent called Amasia that would form at the top of the Earth. Eventually it would slump south toward the equator. And under this scenario, Antarctica might remain isolated at the bottom of the world.

"What they've done is they've thrown another possibility out there that, quite frankly, many of us hadn't really thought about. And so even if the model is wrong, we will learn a lot by testing it."

And he says the challenge isn't simply finding different ways to put together the Earth's jigsaw puzzle continents.

"This is really important because it influences the evolution of our entire planet, including life that lives on it," Murphy says. "For example, many people believe that supercontinents form and stood apart their fundamental changes in climate."

Of course, the next supercontinent isn't likely to form for another 100 million years or so. And Mitchell says the human species will probably be long gone by then, so we won't know, "but it's certainly fun to think about."

Research Shows Texas Having A Link To Antarctica Aug. 8, 2011