Accessibility links
China's Demolition Derby Turns History Into Rubble Historic buildings in Beijing are being demolished in the pursuit of quick profit. Even the home of the architect who urged Mao Zedong to preserve Beijing's old city has fallen to the wreckers' ball, sparking considerable outrage. And the epidemic of destruction is spreading to new buildings, too. 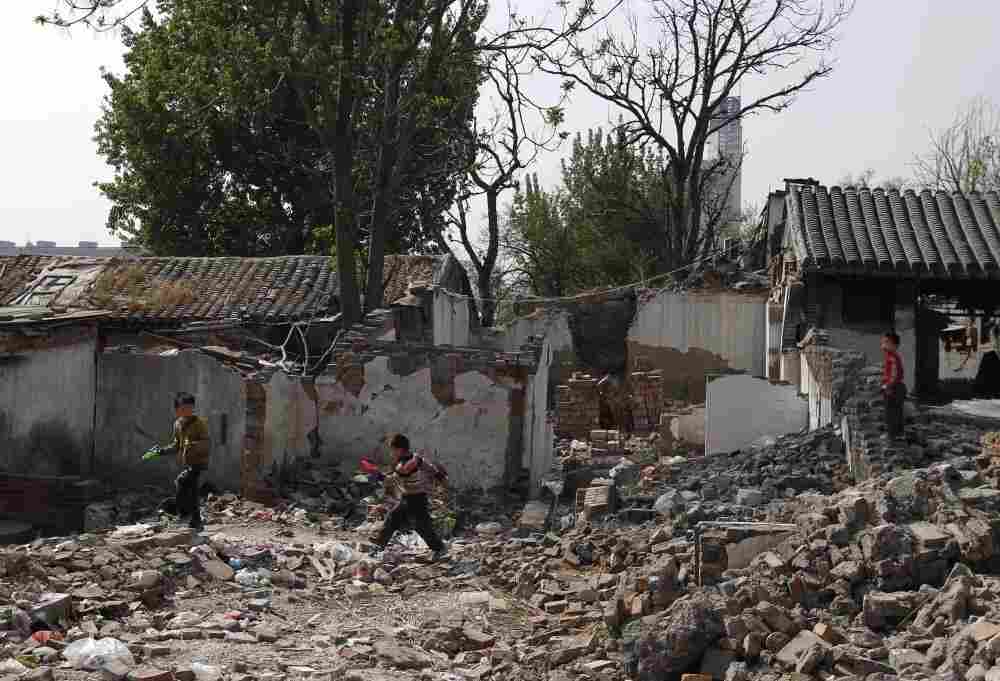 Children play in a traditional residential district in Beijing that is undergoing demolition, in April 2011. Despite public protest, historic and new homes are being destroyed all over the city to make way for development. Anonymous/AP hide caption 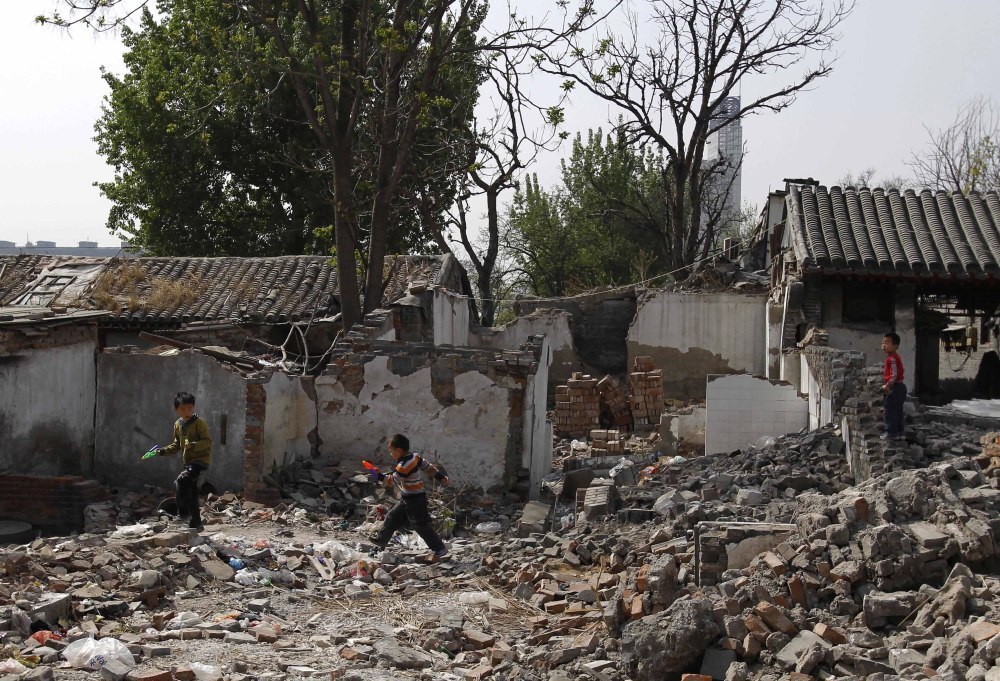 Children play in a traditional residential district in Beijing that is undergoing demolition, in April 2011. Despite public protest, historic and new homes are being destroyed all over the city to make way for development.

Down a quiet Beijing alleyway on a recent day, as the winter wind whistles, two men stand guard over a pile of bricks hidden behind a corrugated iron fence.

The pile of rubble was once the home of the man known as the father of modern Chinese architecture, Liang Sicheng. The Orwellian reason for its demolition? "For maintenance," according to a Xinhua news agency report, citing the developer, Fuheng Real Estate company.

It's a sign that, in today's China, not even fame can stop the wreckers' ball. After all, Liang was the architect who urged Mao Zedong to preserve Beijing's old city in its entirety, by building a new city beside the ancient one. And although Beijing's Olympic face-lift is long gone, the epidemic of destruction is still spreading, with new buildings as well as old being pulled down. 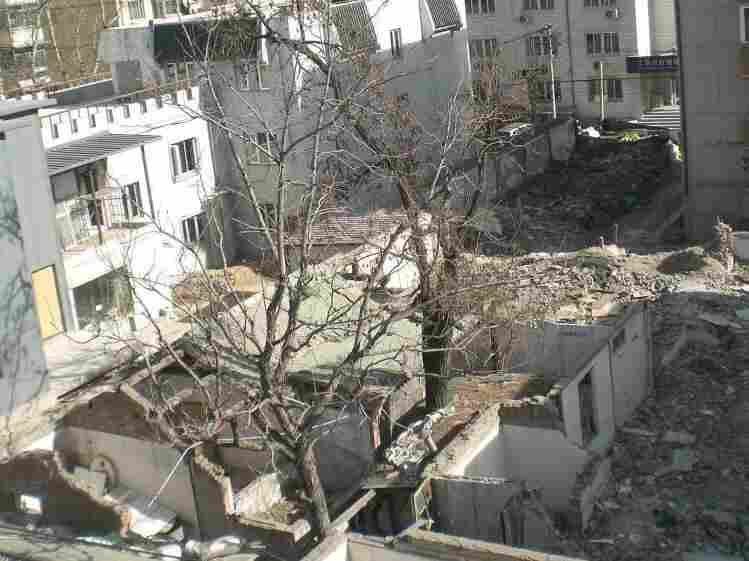 Liang Sicheng, known as the father of modern Chinese architecture, lobbied Mao Zedong to preserve ancient buildings in Beijing. Despite efforts to have his former courtyard home in Beijing preserved as a cultural relic, it was recently demolished. Louisa Lim/NPR hide caption 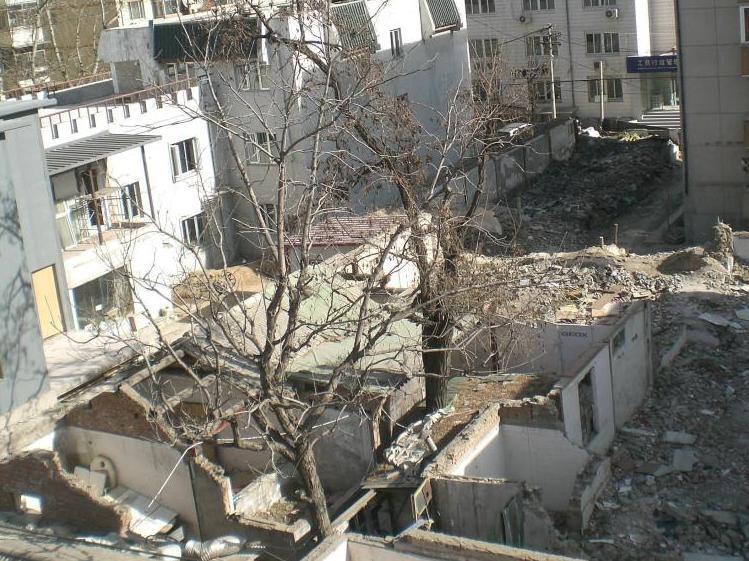 Liang Sicheng, known as the father of modern Chinese architecture, lobbied Mao Zedong to preserve ancient buildings in Beijing. Despite efforts to have his former courtyard home in Beijing preserved as a cultural relic, it was recently demolished.

"This concept of 'demolition for maintenance' doesn't exist," says He Shuzhong, founder of the Beijing Cultural Heritage Protection Center, a nongovernmental organization. "I think this company that demolished the house are hooligans. I think they are thugs. This company should become infamous forever."

Liang and his wife, Lin Huiyin, lived in the courtyard house at 24 Beizongbu Hutong for seven years in the 1930s. Later, they came to prominence for their part in compiling a magnus opus on Chinese architecture. Liang also designed China's national emblem and was asked to develop a national style of architecture for modern China after the communist revolution in 1949.

But his plans to preserve old Beijing were rejected, which caused him almost physical pain.

Some of the Chinese media said, 'We can't cover this unless someone dies.' That's honest. There's so much demolition. If all the demolitions were reported, maybe there wouldn't be enough space in all the newspapers, television and radio stations in China.

"Each city gate knocked down is like a chunk of flesh scooped from my body," he said, according to one documentary. "Each brick wall removed is like peeling off a layer of my skin." Liang died in 1972.

For the past few years, the Beijing Cultural Heritage Protection Center has been fighting to save his house. They were able to stop the building's demolition three years ago, and it was supposed to be protected as a cultural relic.

But that was not enough to stop the developers, who moved in under cover of the recent Chinese New Year holiday to tear down the courtyard building. But the public outrage has heartened He, the group's founder.

"I've received 8,000 emails, and people call me all day long until midnight. So Liang and his wife up in heaven may feel great pain seeing their old home demolished," says He. "But they should feel very gratified so many people are talking about it and taking action."

Even Kong Fanshi, the director of Beijing's Municipal Administration of Cultural Heritage, has voiced his criticism.

"The influence [of this case] is immense," Kong says. "It is the worst case of demolition of cultural heritage in Beijing for years."

Kong has ordered an investigation, but the damage has already been done. 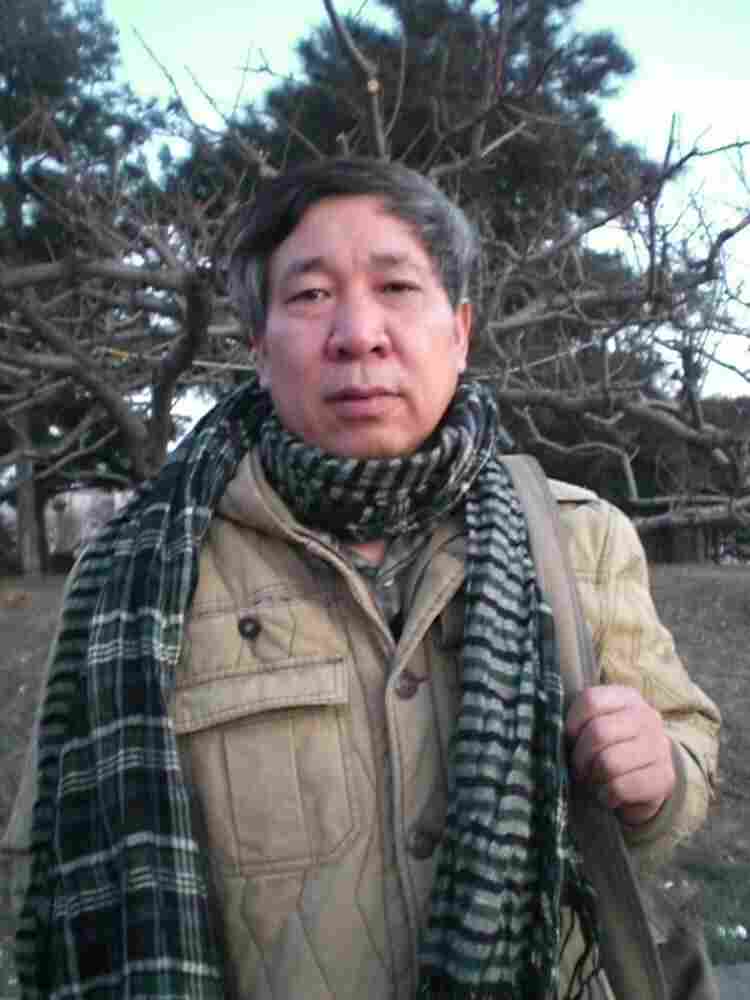 Yan Lianke is one of China's most famous authors, known for his absurdist stories about sensitive subjects. He moved into a new house in 2008, and a year later was told it would be knocked down to make way for development. Louisa Lim/NPR hide caption 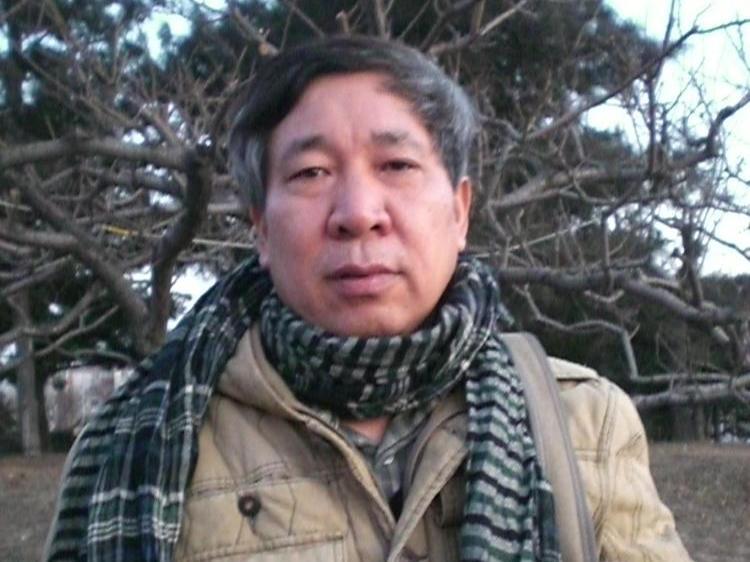 Yan Lianke is one of China's most famous authors, known for his absurdist stories about sensitive subjects. He moved into a new house in 2008, and a year later was told it would be knocked down to make way for development.

The 'Black Hands' Behind The Destruction

Money is driving this epidemic of demolition; local governments need the income they earn selling land to developers. And while few dispute the historical value of the alleys (or hutong), residents don't necessarily want to live there without proper sanitation or heating.

"We all want this knocked down," says one man who lives on the same street where Liang's house was and wouldn't give his name. "Then we wouldn't have to live in such rundown houses."

But it's not only Beijing's old houses that are being pulled down. In the city's southwest, piles of rubble are all that remain of one new housing compound.

Among the 39 families who have lost their homes is one of China's most famous authors, Yan Lianke. His scathing novels address some of China's most sensitive subjects, including the government blood-buying schemes that caused an AIDS outbreak and the famine that killed as many as 40 million Chinese in the late 1950s.

"Money and power are the black hands behind this demolition," Yan tells NPR. "People abuse power blindly. And money is controlling people's minds."

His experience could have come straight out of one of his absurdist novels. He bought his house in 2008 and spent a year decorating it. He had been living there for just a year, and inspired by the surrounding greenery, he wrote a book that he compares to Thoreau's Walden.

Then, out of the blue, he was told his beloved house would be knocked down. He was never shown any official documents explaining why. They were, he was told, confidential. Local media showed no interest.

"Some of the Chinese media said, 'We can't cover this unless someone dies.' That's honest," Yan says. "There's so much demolition. If all the demolitions were reported, maybe there wouldn't be enough space in all the newspapers, television and radio stations in China."

Yan wrote an open letter appealing to President Hu Jintao: "As a Chinese citizen, I love my country dearly. As a writer, I am willing to give all I have to promote Chinese culture. As a university professor, I hope to see my students able to study and grow up in a loving and harmonious environment. It is because of my foolish dream of bearing the weight of our nation on my shoulders that I am writing this urgent appeal to you."

There was no response. His community of newly wealthy became rebels, posting pictures of Chairman Mao and President Hu in their windows, threatening to defend their houses to the death.

But one neighbor was detained. Then the buildings were all designated "illegal structures," despite the fact that the local government had worked with the developer in building them. Eventually, the homeowners gave in and accepted compensation equivalent to $250,000 each, regardless of the size of the house.

No End In Sight

Yan says he'll take the case through the courts. But the experience made him realize his own powerlessness.

"I feel that a person's power — a writer's power — is so small. It is not worth mentioning," Yan says. "Even if you write to President Hu, this letter is like a stone thrown into the sea."

In any case, he has vowed to write a book about his experience, though no Chinese publisher would touch such material. Four of his books are already banned. But the past year has been the blackest of his life.

"Such desperation is not just about my house and belongings. It's more a kind of spiritual desperation. You feel our society is so rich, yet so deformed. You start to feel distrustful of reality, and desperate," Yan says.

There's no end in sight for the destruction. At Beijing's Drum and Bell Towers, on the city's central axis, residents of 60 courtyard houses have been notified their homes are slated for demolition. This time, the local press says, it's for a "style restoration project."

But, as these latest cases show, demolition is no longer just affecting poor urban families and farmers. Even the great and good are at risk; neither wealth nor fame can stop the developers.