Accessibility links
A New Weapon Against Nukes: Social Media A top State Department official wants to unleash the power of Twitter, Facebook and other services to crowdsource the fight to control the world's nuclear weapons. 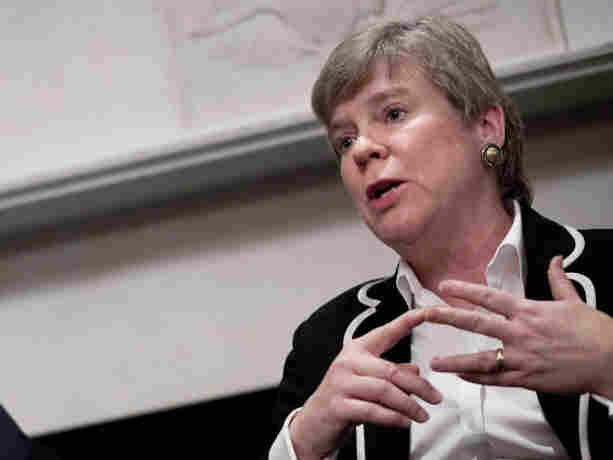 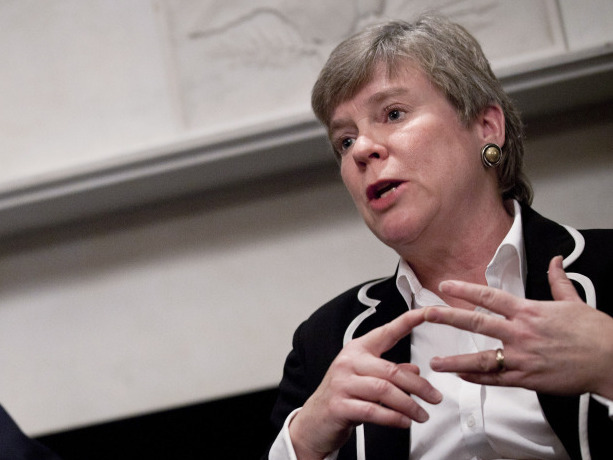 Rose Gottemoeller, acting undersecretary of state for arms control, quickly links those two unlikely partners in conversation. She's behind a campaign to discover how new communications tools can help rid the world of some of the dangers of nuclear weapons.

Gottemoeller is an avid user of Twitter, and it made her wonder how Twitter and other methods of crowdsourcing a problem can help her in her work.

Or could it help determine the number and status of deployed nuclear warheads — a topic that couldn't be more sensitive? Gottemoeller was the chief American negotiator on the New START agreement with Russia, and now a year into its implementation, she is thinking about the next items on the arms control agenda.

"As we look to the future of nuclear arms reductions, for example, we're concerned about going after smaller objects like warheads and monitoring warheads," she says. "How can we be helped by the kind of information that's readily available throughout the cybersphere?" 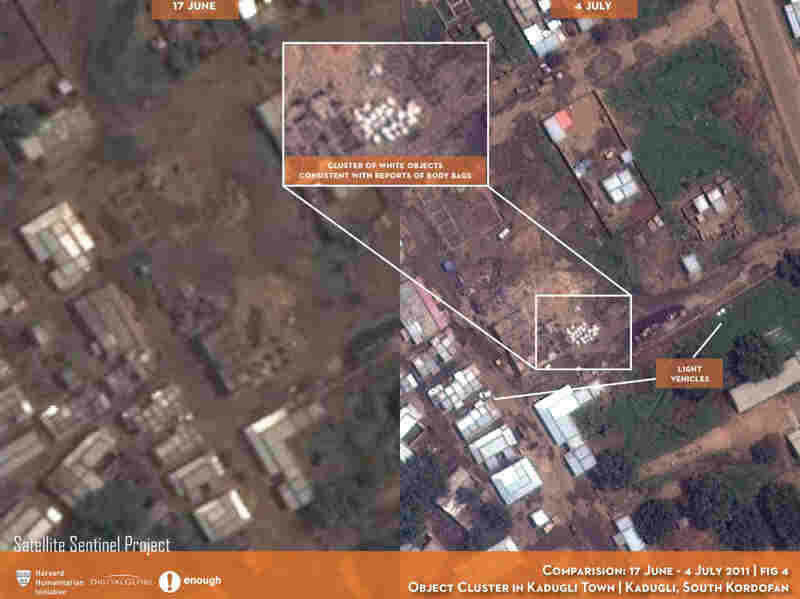 This satellite image of Sudan was made available by the Satellite Sentinel Project in 2011. It appears to be a mass grave, offering the first aerial photographs from a conflict zone that outside observers can't access. DigitalGlobe/AP hide caption 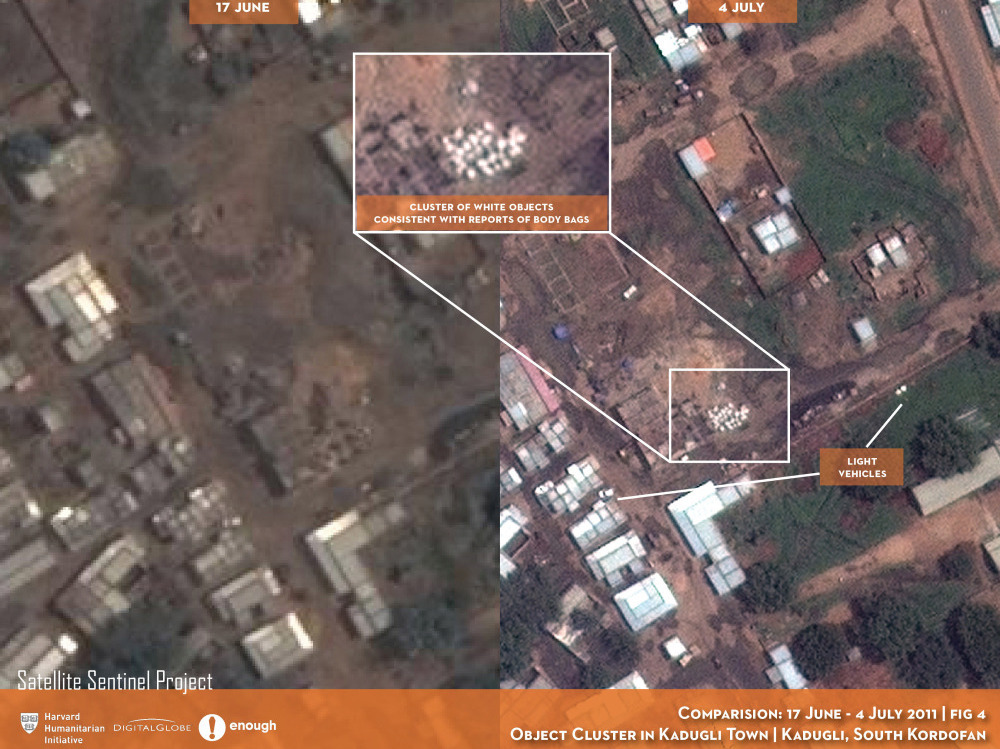 This satellite image of Sudan was made available by the Satellite Sentinel Project in 2011. It appears to be a mass grave, offering the first aerial photographs from a conflict zone that outside observers can't access.

In a recent speech in Seattle, she appealed to garage tinkerers, technologists and gadget entrepreneurs for help. The idea, she says, is to elevate the power of citizens through monitoring projects that could add to the usual methods of verifying a country's nuclear declarations.

Broadly speaking, some projects that would fit this description are already under way. One is the Satellite Sentinel Project, which is connected to Harvard University and funded by George Clooney. It's using civilian satellites to watch what's happening on the violent border between Sudan and South Sudan and in Darfur.

The Institute for Science and International Security has been posting satellite photos of nuclear sites in Iran for several years, monitoring the development of important facilities, says Joe Cirincione, president of the Ploughshares Fund.

"What used to be the sole tool of great states can now be purchased by an NGO," he says.

But civilian and nongovernmental organizations are only beginning to appreciate the potential of these technologies, says Cirincione, who is also a Twitter fan.

"You can imagine how you can take that kind of transparency and verification technologies that satellites give you," he says, "marry it up to the networking capabilities that Facebook, Twitter and the Web give you, and you can really start to imagine a verification regime that would make it very difficult for any state to hide a significant nuclear capability." 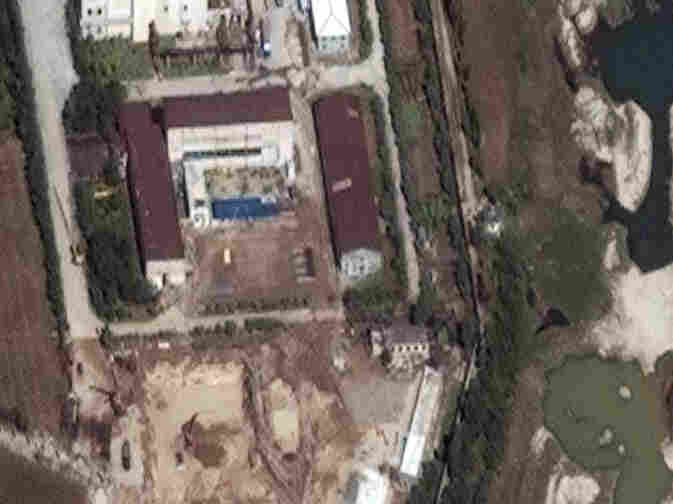 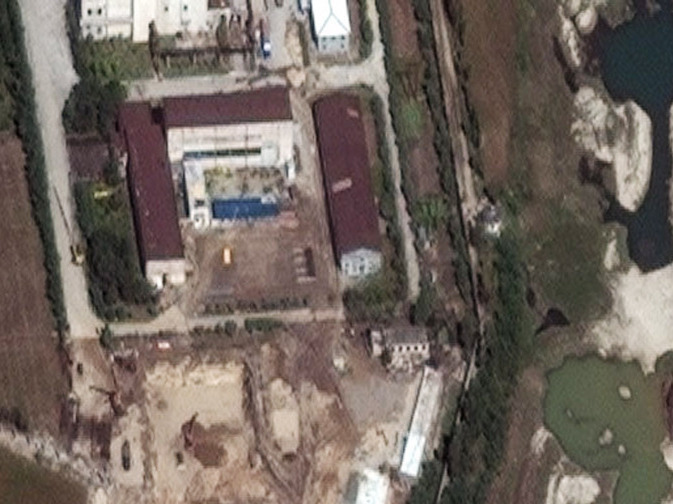 This satellite image provided by DigitalGlobe, taken in 2010, shows the Yongbyon nuclear complex in North Korea. The Institute for Science and International Security monitors satellite images for updates to nuclear facilities.

Building Trust Between Citizens And Government

In Gottemoeller's view, the emergence of citizen-led efforts should actually increase trust between civilians and the state.

"We think that this is a realm where governments can actually partner with their citizens in order to make the case that they are fully living up to their arms control obligations," she says.

But not all nations, and not even all American diplomats, are as enthusiastic. It has not been easy, Gottemoeller says, to convince everyone at the State Department. In essence, it requires U.S. policymakers to accept that they will have to be much more transparent themselves.

"States still want to rely on secrecy. It's just harder to do," says George Perkovich, a nuclear policy expert at the Carnegie Endowment for International Peace.

Perkovich believes that Gottemoeller's idea makes it harder for states to rely on secrecy and harder to cheat on their obligations "because the idea that somebody in their complex, somebody in the know could actually blow the whistle can be a deterrent," as he puts it.

There are dangers as well. The use of Twitter and Facebook has already raised concerns in many national police and intelligence services. This kind of activity can still be viewed as espionage.

"If people try to organize groups along this basis, I would think those states could say that that's a violation of the state's monopoly on this function," he says, "and you could say it's an act of treason or espionage, and people may be putting their lives at risk."

The WikiLeaks disclosures raise directly the question of what's a secret and what's public information, Cirincione says, and as a result, the gap between them narrowed even further.

"States still have very deep, dark secrets that they guard jealously. It's just that it's harder and harder to do that, and when they break, they break instantaneously and globally," he says.

But one of those garage tinkerers might some day devise an app that turns an iPhone into a Geiger counter. It's already possible to keep track of government radiation sensors with an iPhone. New technology, however, could give citizens the ability to detect and track radiation on their own — perhaps from hidden, loose nuclear material or from an accident at a nuclear power plant.