Accessibility links
Conservatives Worry Romney's Vision Is Cloudy Republican presidential candidate Mitt Romney's losses on Tuesday have raised questions once again about his ability to inspire passion from his party's base. There has been a daily drumbeat begging Romney to put some meat on the bones of his policy agenda and set out his vision for the country. 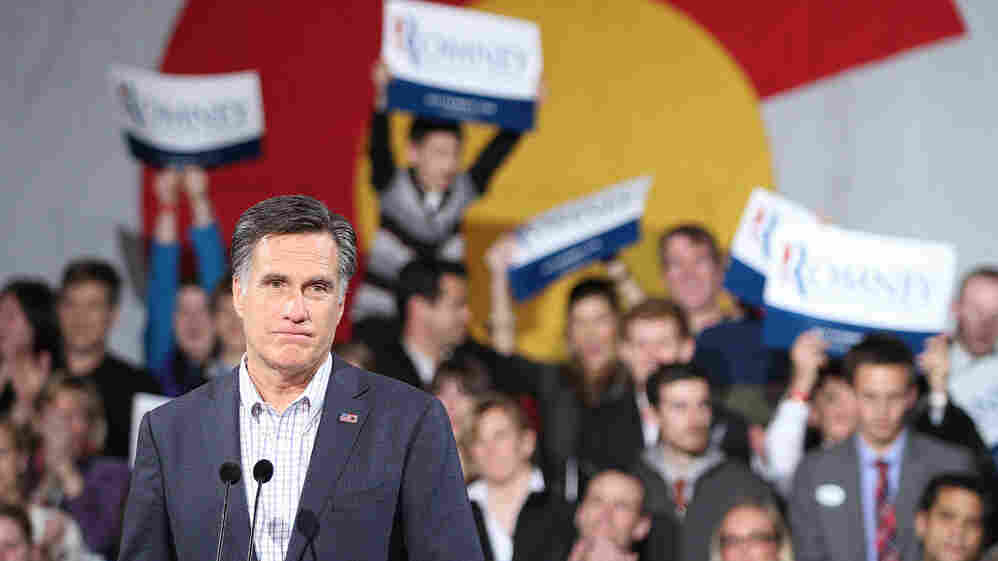 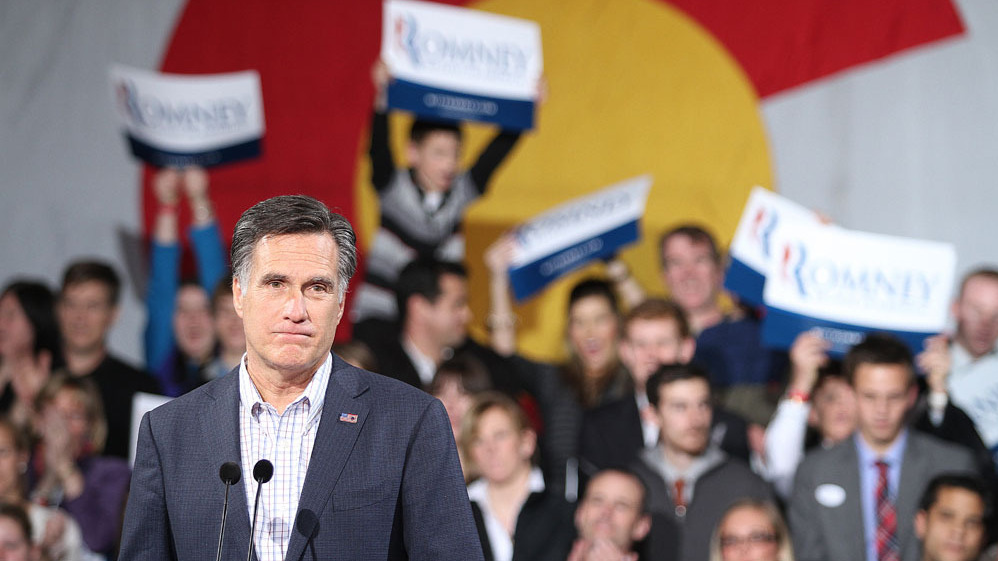 Republican presidential candidate Mitt Romney speaks to supporters at a rally in Denver on Tuesday.

Republican presidential candidate Mitt Romney's losses on Tuesday, while not very meaningful in the race to accumulate delegates, have raised questions once again about his ability to inspire passion from his party's base and about his viability in the general election.

Rival Rick Santorum's victories in Colorado, Missouri and Minnesota dealt a setback, if not exactly a body blow, to Romney — whom Santorum routinely dismisses as a candidate with a big machine but no core.

"Gov. Romney's been able to bully his way through this primary, outspending opponents on average about 5 to 1," Santorum said Tuesday. "But he's not inspiring. He's not painting a vision."

The Romney campaign is playing down Tuesday's defeats, still confident in its ability to win the long slog for delegates. Romney adviser Vin Weber says there are no plans for big changes.

"It would be a mistake to think that Romney has to fundamentally retool or redirect his campaign," Weber says. "I think that his overriding message — which is that he's the guy with the business experience that can get the economy back on track — is going to remain the message that is dominant throughout the campaign."

And, true to form, Romney's concession speech in Denver stuck to his themes: The economy is still a mess; it's the president's fault; and I know how to fix it.

"I stand before you ready to lead this party and lead the nation. I have led businesses. I have led an Olympics. I had the chance of helping to lead a state," the former Massachusetts governor said.

But Kim Strassel, a conservative columnist for The Wall Street Journal, argues that Romney is relying much too heavily on his experience.

"He's been a very successful businessman. He's got a strong family. This is all stuff that is reassuring to people," Strassel says. "But you also have to go out and make the case that you have big, bold ideas."

Running On A Resume

Strassel is not alone. There has been a daily drumbeat from the conservative grass roots all the way to the editorial pages of The Wall Street Journal begging Romney to put some meat on the bones of his policy agenda.

Even Karl Rove says Romney's campaign is "tilted too heavily toward biography and not nearly enough toward ideas." Rove knows running on a resume can be risky. In 2004, Rove helped Republican George W. Bush teach Democrat John Kerry that lesson.

As Matthew Dowd, who was also a top strategist on that campaign, puts it: "John Kerry and the Vietnam record — that was going to be his major asset in a national security election. ... 'I'm a war hero. This is who I am.' That asset became under attack and became washed away as an asset in the election. Mitt Romney's experience at Bain and his private sector experience was supposed to be the major asset he was [relying on] in an economic election. If that is diluted, that is a huge problem."

As Romney's tenure as a private equity investor is dissected and attacked, some conservatives are concerned Romney might end up like Kerry — without the medals.

Others, like Matt Kibbe of FreedomWorks, a Tea Party resource center in Washington, worry whether Romney can help energize grass-roots conservatives for other Republican candidates.

"Traditionally, it's quite important to have the top of the ticket pulling the rest of the slate along with them," Kibbe says. "That's why, if he should be the nominee, he's going to have to offer up some bold ideas that he hasn't done yet."

Backing Up A Call To Arms

Romney appears to have heard the party's hunger for a campaign about something more than beating President Obama, and he's trying to frame the choice in epic terms.

But Strassel says he hasn't backed up that call to arms with substance. That's becoming a more urgent matter — not just because the economy is improving, threatening to undercut Romney's main rationale, but also because, as Tuesday's results show, Romney still has trouble with the conservative base, even as he declares the soul of America at stake.

"That is certainly what a lot of conservative and independent voters want to hear because it reflects their concerns and their moods," Strassel says. "He's got that. What he has not done yet is actually put out what his idea is for fixing it."

What he has laid out, Strassel says, hasn't been communicated.

"He has a 59-point plan, and if you asked most Americans what was in that 59-point plan they would not be able to tell you even one," Strassel says.

Weber of the Romney campaign has a message for the conservative peanut gallery waiting impatiently for his candidate to lay out a big reform vision: Stay tuned.

"It's still pretty early in this process," he says. "This is all going to come. I mean, the campaign is working now on the next phase of a tax reform proposal, but it's not going to all happen at once."

Romney now has two goals: to nail down the nomination and, at the same time, present the country with his own vision.