Accessibility links
In Restive Syrian City, Signs Of Sectarian Violence Activists say three families, including women and children, were stabbed or shot at close range just outside their houses in Homs on Tuesday. Human rights groups say killings like these are becoming increasingly sectarian, which doesn't bode well for a conflict that's already spinning out of control. 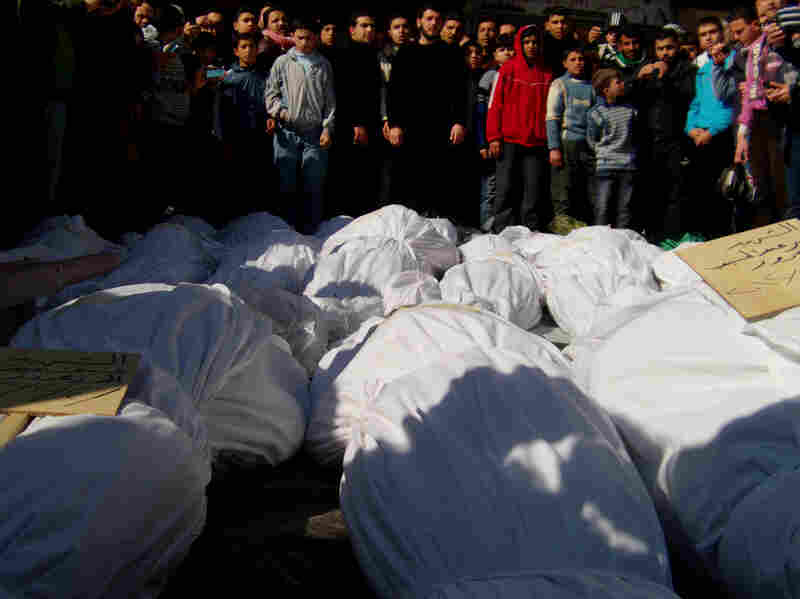 Residents attend a burial ceremony of what activists say are victims of shelling by the Syrian army in the Khalidiya neighborhood in Homs on Feb. 4. Reuters/Landov hide caption 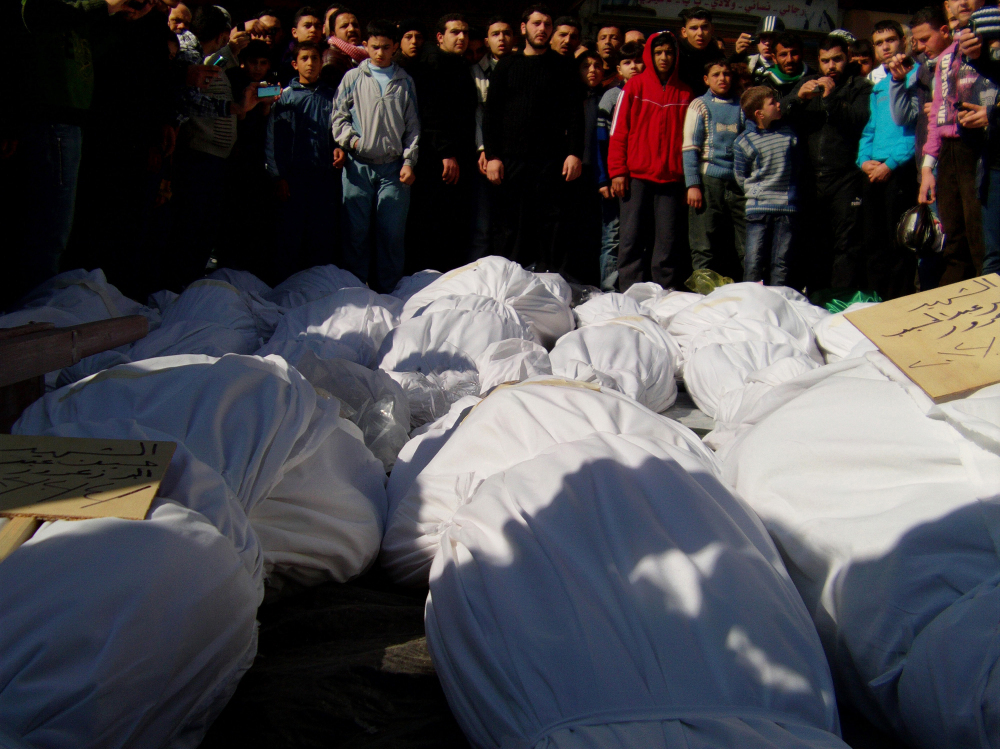 Residents attend a burial ceremony of what activists say are victims of shelling by the Syrian army in the Khalidiya neighborhood in Homs on Feb. 4.

Hundreds of people have died from tank, mortar and rocket fire in the Syrian city of Homs, the target of bombardment by government forces for the fifth day in a row. And activists say three families, including women and children, were stabbed or shot at close range just outside their houses Tuesday.

Activists in Homs say the attack on the families occurred in the al-Sabeel neighborhood, a mixed area of Sunnis and Alawites. Sunni Muslims are the majority in Syria, but the ruling family is Alawite and identifies itself as Shiite.

Activists say pro-government troops shelled al-Sabeel on Tuesday, after which pro-government thugs went to the houses of three Sunni families. They say at least one family was stabbed to death.

A macabre video shows the body of what activists say is the head of that family, with large open wounds that look like slices in his face and arms. In all, activists say 19 people were killed in al-Sabeel.

Human rights workers who document such cases say attacks like these are becoming increasingly common. Pro-government Alawites are killing anti-government Sunnis. And, in turn, Sunnis are killing Alawites.

It's difficult to verify the details in many cases because access to Syria is limited. NPR spent several days tracking down activists and witnesses by phone and Skype to detail another recent spate of killings.

It was a Thursday, nearly two weeks ago. Government troops began shelling the neighborhood of Karm al-Zeitoun, which also has a mix of Sunnis and Alawites.

One witness who goes by the name Karam says that when the shelling stopped, the Alawite thugs moved in. He says the thugs left Alawite families alone, but told Sunni families they had until noon to leave the neighborhood. More than 100 families made it out, Karam says. The ones who didn't were killed: stabbed or shot to death.

Once the thugs had gone, Karam and other activists entered one family's house.

"The smell of blood was so strong," Karam says, "you know, like the smell of a slaughtered animal. The children were scattered around the floor. The women were crumpled in a corner. There were 12 bodies in that house."

Activists later learned that another family had been killed that day in the same mixed neighborhood. This time it was a family of six.

Adnan, a nephew of one of the victims, says he called his uncle on the morning of the killing.

"I told him to leave the neighborhood," he says. "I even offered to help, but he told me there were tanks in the street and his family was trapped."

Days later, activists discovered the bodies of Adnan's uncle, his uncle's wife and their four children. Activists tried to retrieve the bodies but were stopped at a checkpoint and taken to jail. Government troops took the bodies to a government hospital.

Adnan went to pick up the bodies a few days later. He says he was forced to sign a document saying the family had been killed by terrorists.

NPR asked Adnan if the killing of his relatives will force him to take revenge.

"The government is trying to stir up sectarian hatred," he says. "But we won't let them do it."

Human rights workers say the good news is that these incidents are still isolated to the city of Homs. The bad news is that they are starting to look like ethnic cleansing. What's more, they say, both sides use the incidents for their own propaganda.

A report on a pro-government TV channel shows Alawites saying their homes were attacked by terrorists — a term most Syrians would understand to mean Sunnis.

One human rights worker told NPR it doesn't even matter if the facts of these reports are true. All it takes is the perception of sectarian killing to spark the fire of revenge.