Accessibility links
Why America Pursues More Perfect Politics We're a nation in search of the perfect birth, martini, pizza, golf swing, job, dress and financial plan. How do we square the American quest for flawlessness with quirky caucuses and wacky candidate selection? 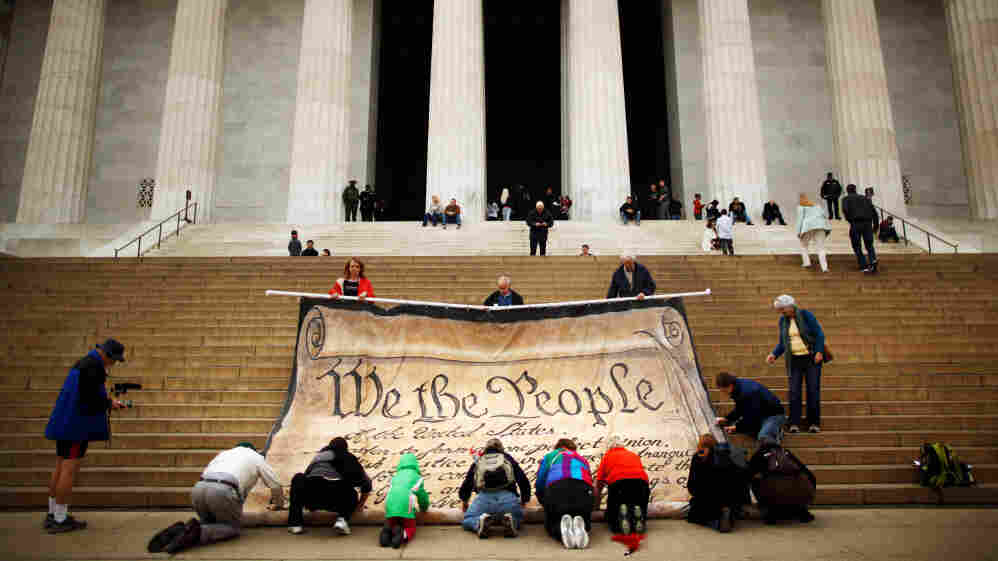 Americans are always searching for a "more perfect union." Volunteers roll up a giant banner printed with the Preamble to the U.S. Constitution during a demonstration against the Supreme Court's Citizens United ruling at the Lincoln Memorial in Washington on Oct. 20, 2010. Chip Somodevilla/Getty Images hide caption

Americans are obsessed with perfection.

We implement zero-tolerance policies in our schools and businesses. We improve on the atomic clock with the quantum-logic clock that is twice as precise. We use multi-angle instant replay cameras in certain professional sporting contests to make sure the referees' calls are flawless. We spend millions on plastic surgery. We strive for higher fidelity, resolution, definition, everything.

Bookstore shelves sag with the works of people in search of the perfect birth, martini, pizza, golf swing, job, dress, financial plan, you name it.

Many famous Americans are famous for being perfectionists. Steve Jobs, for instance. "Jobs' father," writes biographer Walter Isaacson, taught young Steve "that a drive for perfection means caring about the craftsmanship even of the parts unseen. ... This passion for perfection led him to indulge his instinct to control."

Mythic football coach Vince Lombardi once said, "if we chase perfection we can catch excellence."

Even the Founding Fathers sought flawlessness. The Preamble to our Constitution invokes the P-word: "We the people of the United States, in order to form a more perfect union ..."

In a speech to the 1787 Convention that hammered out that Constitution, Benjamin Franklin broached the subject of national perfection. "I doubt ... whether any other Convention ... may be able to make a better constitution," he declared. "For, when you assemble a number of men, to have the advantage of their joint wisdom, you inevitably assemble with those men all their prejudices, their passions, their errors of opinion, their local interests and their selfish views. From such an assembly can a perfect production be expected? It therefore astonishes me, sir, to find this system approaching so near to perfection."

Proto-American Franklin took perfectionism personally. In his 1791 autobiography, he writes of his own personal "bold and arduous project of arriving at moral perfection." He set out to "acquire the habitude" of 13 virtues, including order, frugality, sincerity and, yes, humility.

For our nation's heroes and our heroes' nation, perfection is not the state we live in, but it is the state we aspire to.

Which may go a long way toward explaining our Byzantine political process — with its quirky caucuses, open and closed primaries, wacky ways of choosing candidates.

Perfection "doesn't exist in nature, in which small adaptations are occurring all the time in response to changing conditions," says Hara Estroff Marano, editor at large at Psychology Today and author of A Nation of Wimps. Systems that allow for error, she says, "produce novel changes ... innovation ... that then become the means of new, successful adaptation."

We tamper and tinker with political adaptations. Upstart group Americans Elect is planning to hold a national online primary "to nominate a presidential ticket that answers directly to voters — not the political system."

Jim Geraghty, a contributing editor at National Review and a Republican, writes in Roll Call that we should create a new primary calendar for 2016 that — unlike the present system — permits as many people as possible "to have a meaningful effect on the nominee selection process by voting."

He suggests that the nomination process for Republicans — and perhaps for Democrats — begin with less-populated states, which will have the fewest delegates, and work its "way up to the largest and most delegate-rich states. To prevent a prohibitively long and expensive 50-week primary, we would cluster the states into geographic groupings." 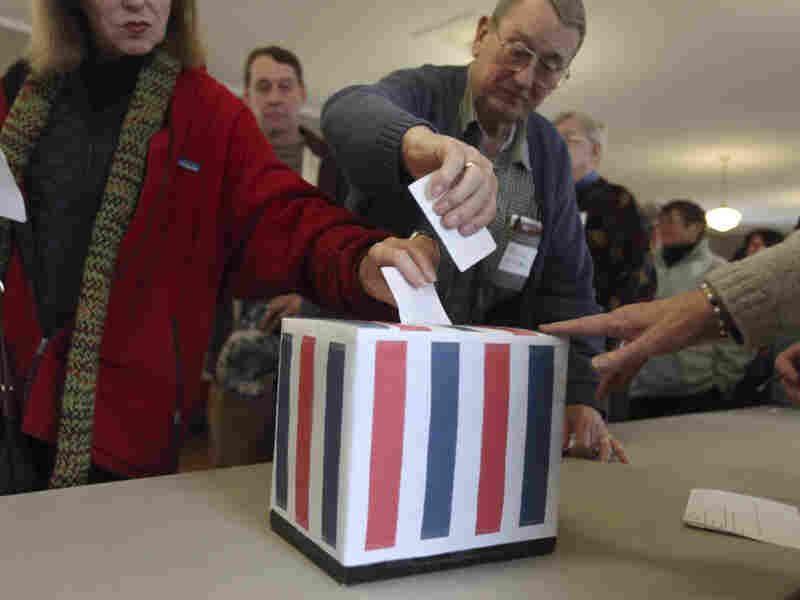 With its quirky caucuses and wacky candidate selection, the American political system may not be perfect, but it's a work in progress. Voters cast a ballot during the Harpswell Republican town caucus at the Old Orr's Island School House in Harpswell, Maine, on Feb. 11. Joel Page /Reuters /Landov hide caption 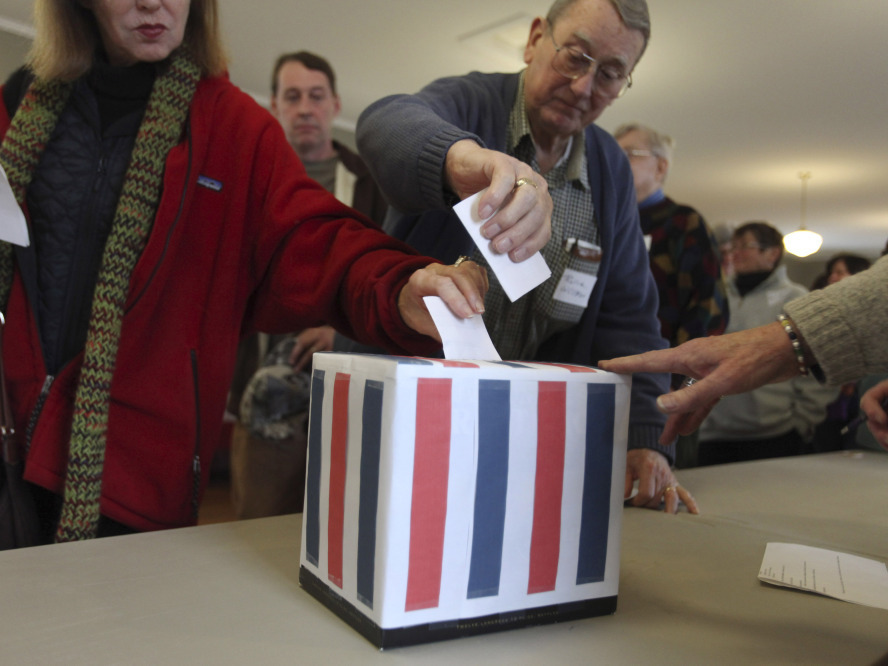 With its quirky caucuses and wacky candidate selection, the American political system may not be perfect, but it's a work in progress. Voters cast a ballot during the Harpswell Republican town caucus at the Old Orr's Island School House in Harpswell, Maine, on Feb. 11.

Some people want to fine-tune the process in other ways. In 2009, following the election of Barack Obama, the Democrats tinkered with their primary system. Leaders of the party voted to make several changes, CBS News reported, including the elimination of the so-called "unpledged superdelegates" who were not bound by the results of their states' primaries or caucuses.

Still other Americans believe the system is fundamentally sound. Susan Estrich, for instance, who was campaign manager for Democratic presidential candidate Michael Dukakis in 1988. Now she is a Fox News commentator.

"Political scientists have spent decades explaining all the things that are wrong with this system," Estrich writes in a recent essay for Newsmax. "Folks like me, who helped craft this system (in my case, on the Democratic side), have written endlessly about the goals it was intended to serve — many of which, by the way, don't have much to do with picking the candidate most likely to win in the fall."

It is a system, she writes, "that is supposed to allow insurgents a fair chance; parties a chance to build; voters a chance to send a message; small states a say they wouldn't otherwise get. Agree or disagree, I think most students of the process, if we were starting from scratch, would never end up with it.

"But here's the truly amazing part. Time after time, it actually works."

Seeking perfection as a person or a nation is not wrong, says George Nethercutt, who was a Republican congressman from Washington state in the late 1990s. "But achieving perfection usually includes disappointments, setbacks that equal learning experiences and a fuller recognition of imperfections. Peoples and nations should strive to meet high standards that are self-imposed."

When we focus on perfection, says Nethercutt, who now leads the study group "Why Study America?" at Harvard University's Kennedy School Institute of Politics, we sometimes lose sight of the value of notions such as "improvement" and "overcoming obstacles."

Perceptions of perfection differ, Nethercutt says, particularly in a nation as broadly populated and diverse as the U.S. But, he hastens to add, that "doesn't mean we shouldn't have standards, both as a people and as a nation. Only then can we measure progress."

The forefathers set some pretty high standards. As Franklin foresaw, the union may already be perfect in its own quirky, clunky way. The challenge is to form an even more perfect union. The word "more" implies that perfection is plastic, pliable and in motion. In other words, perfect can still become more perfect.