Accessibility links
Over Bowls Of Soup, Donors Find Recipe For Change You don't have to have big bucks to join the latest trend in philanthropy. Soup groups around the country let diners pool their money to support deserving local initiatives. In Philadelphia, one dinner raised $225 for a teacher's class project. 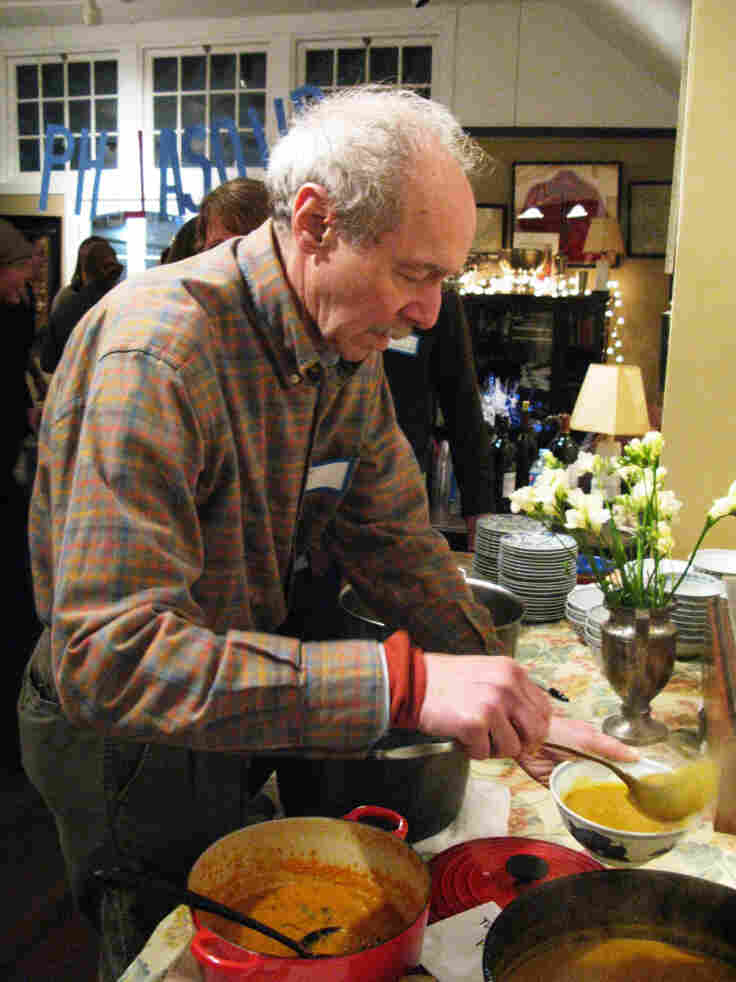 Jon Landau serves others at PhilaSoup, a soup group based in Philadelphia. Linton Weeks/NPR hide caption 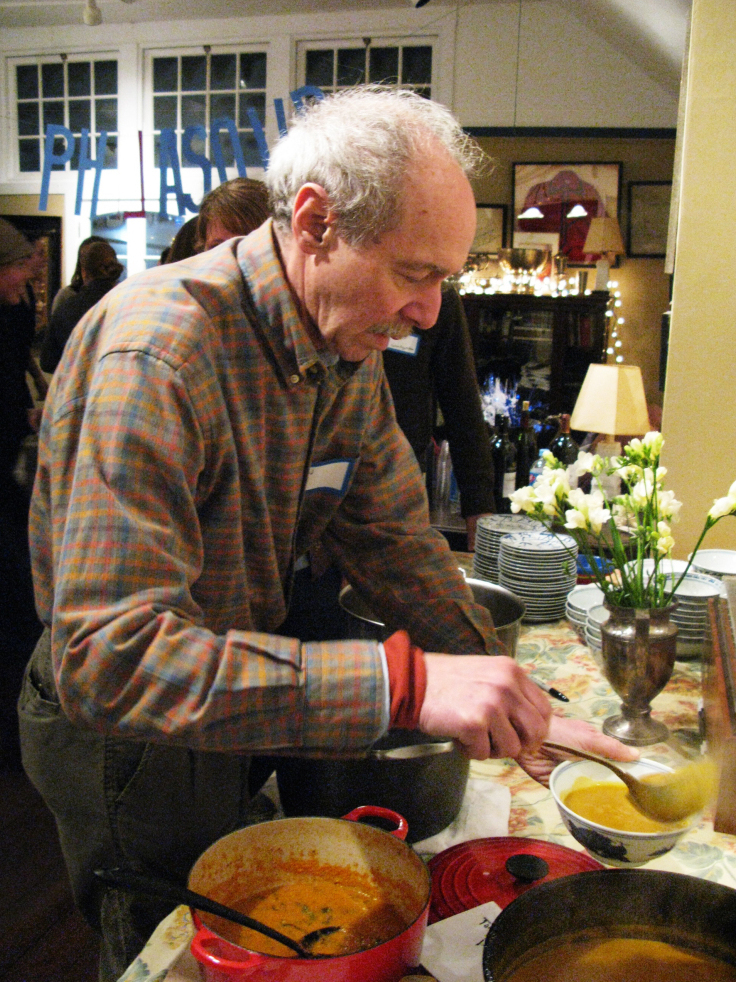 Jon Landau serves others at PhilaSoup, a soup group based in Philadelphia.

The Soup Movement in America is based on a simple recipe: Bring a bunch of people together to eat soup. Ask each person for a modest donation — say $5. Listen to a few proposals about how people might use that pool of money for a worthwhile project. Vote on the best proposal, and give all the money to the top vote-getter. Go home full and fulfilled.

With the national surge of microfinancing and social entrepreneurship, soup groups have bubbled up in Detroit, Fort Worth, Los Angeles and other cities around the country. FEAST, founded in Brooklyn in 2009, has awarded more than $17,000 in small grants. Louisville's posSOUPbility group convened for the first time on Jan. 29. You can find a loose-knit network of active — and not so active — groups at the Sunday Soup website.

Many of the confabs have a special focus. Sprout Seattle, for example, provides funds for emerging artists. In Philadelphia, an organization called PhilaSoup concentrates on education.

PhilaSoup was founded in 2011 by two Philadelphia sisters, Claire and Nikka Landau, with help from their friend Jason Tucker. "The vision for PhilaSoup," according to Nikka, "is a monthly microgrant dinner meant to bring innovative and dynamic Philadelphia-area educators together, highlight the great work they are doing, and fund some innovative education projects."

Nikka brought the idea home with her from Detroit, a key city in the Soup Movement. "I loved the idea of coming together with strangers over a meal," Nikka said, "and finding out more about our shared community."

On a recent Sunday night, the trio of friends welcomed about 45 teachers and other members of the local education community to a cozy gathering at the University Barge Club, a 19th-century boathouse on the banks of the Schuylkill River. As folks walked in, they were asked to fill out name tags — with their names and the names of their favorite children's books.

"Teachers all over Philadelphia are doing terrific projects," Claire said. "It's really exciting to gather and break bread with teachers from across the city doing exciting things."

Out the window of the Barge Club's cozy meeting room, the silver-blue and glassy waters flowed below as the sun set in the midwinter sky. Inside, people mingled over wine and clementines. Warmth was provided by a gas-log fire and genial conversation.

Mounted on the walls — alongside a ginormous moose head and various memorial oars — were old photos of rowing teams, working together in concert to accomplish a greater task. Metaphor in black and white.

Four soups — lentil, tomato bisque, beef barley (made by the Landau sisters' father) and ginger carrot — were served, along with French bread and pumpkin muffins.

As people slurped their last spoonfuls, Jason and the Landau sisters welcomed everyone, explained how the evening would unfold, and called on the first presenter. Presentations were limited to three minutes apiece. Questions were allowed.

In striped blouse, dark skirt and glasses, Lacey Boland, a 7th-grade English teacher at Independence Charter School, spoke very fast. She said she would use the money for a student publication program. Students had written retooled versions of fairy tales and turned the stories into books. She read an excerpt of one of the retellings, Snow What: The Remix.

" 'There's something wrong with her,' the doctor sighed. The mother was in a daze. She let out a small mix between a scream and a gasp."

Lacey said she planned to use the night's money to pay a visiting author to give a workshop. And she said that when it comes to her students, "it's really hard to underestimate the power of having seen their word in print."

The second presenter was Brian Kerner, a high school art teacher at Prep Charter High School. Brian — in black jeans and black shirt — waved his hands here and there as he spoke. He said he wanted to use the microgrant to buy art supplies so that his students could make family crests in a metalworking project. "Metals are cool," he said. And by helping students create medieval shields with crests that reflected meaningful parts of their lives, he could teach them about symbolism in art.

Alyssa Boyle, a young principal at Camelot Excel North Academy, beseeched everyone to consider her appeal for a dropout prevention plan. She hoped to use the money to buy black vests — to spruce up school uniforms — and to use those vests to encourage marginal students to improve their attendance records. "I can single out the kids who are always there and put them in a nice vest," Alyssa explained. "Any way to make their uniform a little more snazzy is always welcome."

After the three proposals — each met with enthusiasm, support and a few questions — someone passed around a plate of homemade cookies.

As people discussed the pros and cons of the projects, and the presenters stealthily lobbied the crowd for votes, Jason handed out stones to everyone and asked them to place their stone in one of the milk jugs — each labeled with one of the night's proposals — on the table near the exit door on their way out.

The Landau sisters thanked people for coming and bid them all a good night.

Once the crowd had left and the soup was put away, Jason and the Landau sisters tallied the stones. The evening's winner — of about $225 — was Lacey Boland, and her "Fairy Tales Remixed."

This hearty soup comes from Epicurious.

Soak dried mushrooms in boiling-hot water in a bowl until softened, about 20 minutes. Drain in a paper-towel-lined sieve set over a bowl and reserve soaking liquid. Rinse mushrooms, pat dry, and finely chop.

Bring soaked mushrooms, soaking liquid, ribs, salt, pepper, and remaining 8 cups water to a boil in a 6- to 8-quart pot, then reduce heat and simmer, partially covered, skimming foam, until meat is just tender, about 1 hour. Transfer ribs with a slotted spoon to a cutting board to cool, reserving broth.

While meat simmers, cook onion, carrots, celery, and creminis in oil in a 12-inch heavy skillet over moderate heat, stirring occasionally, until well browned, 15 to 20 minutes. Stir in barley and cook, stirring, 1 minute.

Discard bones, fat and gristle from meat, then cut meat into 1/2-inch pieces and add to broth along with barley mixture. Simmer, uncovered, until barley is tender, about 40 minutes. Skim fat from surface, then stir in dill and salt to taste.

The recipe is reprinted with permission. 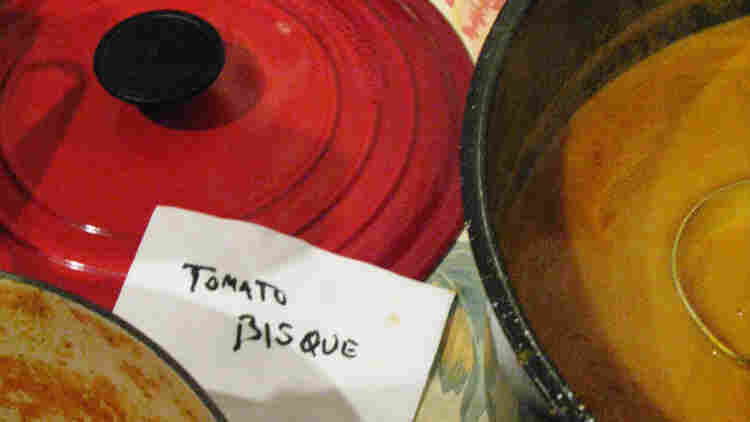 The tomato bisque at Philasoup, a soup group founded in 2011 and based in Philadelphia. Linton Weeks/NPR hide caption

10 heirloom tomatoes (or a mix of tomatoes, doesn't really matter. Heirloom is what I had on hand, and they are bigger than other kinds, so you can replace one heirloom tomato with two plum tomatoes, for example)

Wash the tomatoes and peel the skin. You don't have to remove the skins but the soup will be more smooth if you do. Cut the tomatoes in half and place them on an oven tray with the seedy part facing up. Cover with the olive oil, dried basil and about 1/2 teaspoon sea salt, and roast at 300 degrees Fahrenheit (150 degrees Celsius) for one hour, turning the tomatoes on the other side after 30 minutes. Roasting brings out the tomato flavor and makes a thicker soup. Your house will smell really good after one hour!

Add the roasted tomatoes and the juice surrounding them to a blender, and blend until smooth.

In a medium pot on medium heat, add the coconut oil and the minced garlic. Stir for 10 seconds only, just enough for the garlic to release its flavor. Add 1/2 tablespoon of the fresh basil and 1 tablespoon fresh oregano. Stir for another 10 seconds. Turn the heat on low, add the blended tomatoes and stir for 2 minutes. If the mixture is too thick, you can add some water. Add half of the remaining fresh herbs and the remaining salt (taste constantly!). Stir for another one minute. Remove from heat and add the remaining fresh herbs. You should have a simple, delicious tomato soup.

I served this soup with crusty oven-roasted whole-wheat organic bread topped with olive oil and herbs.

The recipe is printed with permission.