Accessibility links
How One George Lucas Fan Takes Fan Filmmaking Into His Own Hands Fan documentaries may seem like the work of bored hobbyists, but for many fans, they outstrip real DVD features for both satisfaction and information. 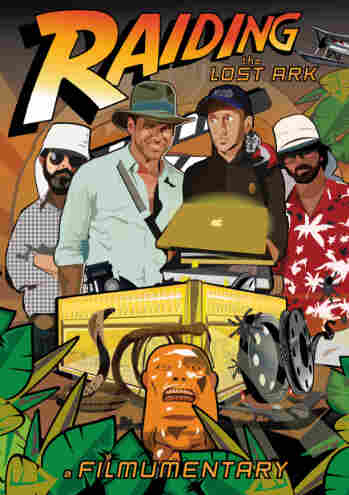 If George Lucas had never created that annoying, slapstick-prone CGI character in The Phantom Menace, history would be different. No amount of "meesa so sorry" can make up for this abomination. And to add insult to injury, Lucas is sending a 3D Jar Jar Binks into theaters on February 10th.

When The Phantom Menace first came out in 1999, Jar Jar became the focus of fan hatred and ridicule. Jar Jar was meant to be comic relief for the kiddies, but he came to symbolize what fans saw as Lucas' flawed creative judgment. One fan was so incensed he re-cut the movie to minimize Jar Jar's presence. He then distributed VHS and DVD copies this "improved" version for free to other fans. It came to be known as "The Phantom Edit," and it gave Star Wars geek Jamie Benning his first taste of fan filmmaking.

"I think when 'The Phantom Edit' first came out of The Phantom Menace,' I think a lot of people realized that the ability for people to do this kind of thing had arrived," says Benning.

In 2006, Benning joined an online group petitioning Lucas to release the Star Wars trilogy in its original form. You know, the one where Han Solo — not bounty hunter Greedo — shot first. Lucas ignored their pleas.

So Benning, a professional editor in sports television and full-time Star Wars nerd, took matters into his own hands and created a fan film.

Benning's films are unofficial documentaries. He uses footage from the original movies without permission from Lucas. Benning follows the flow of the original films but expands them with things like alternate takes and interviews from commentary tracks. For example, Benning edits audio from a Star Wars radio drama over footage of deleted scenes while on-screen text explains that the grainy black and white images come from what's known as the "Lost Cut."

"When I made Star Wars Begins," Benning recalls, "and put that on YouTube, that seemed to touch a chord with people. I think people had become disillusioned with the Star Wars franchise as being spread too thin."

Benning's self-described "filmumentaries" are addictive. Once you start watching you can't turn them off — they overload your senses with trivia and behind the scenes information.

"Jamie Benning's 'Star Wars' documentaries are like DVD extras squared or even cubed," says Francine Stock, presenter of BBC 4's The Film Programme, and author of the book In Glorious Technicolor. "They're amateur in the true sense of being made by someone who really loves his subject."

But Benning's films are professional in terms of the craft. Images may be grainy, but the editing reveals meticulous skill and a geek's dedication to assembling every bit of information in the most enlightening way. Scott Weinberg, film critic for Fearnet, Twitch, and Movies.com, says the fan docs remind people why they fell in love with Lucas' films in the first place and provide a total geek fix. "Oh heck yeah. It's impressive," Weinberg exudes, "and it's just a testament to fandom, to 'this is the way we would like our supplement material.' I think it speaks to a lack of satisfaction with the DVD industry."

Benning repurposes copyrighted material, but Weinberg doesn't see a problem with that. It's no different than someone making a mix tape and sharing it with friends. "This is a love letter," he insists, "It's not someone repurposing a film to make a quick dollar. That's not what it's about. I think it speaks to a passion and a skill that he's willing to do it for the love of it. You could call it a movie fan remix. A commentary remix — video, audio, textual commentary."

Benning spends close to a year on each documentary. He makes no money on any of the films, because copyright issues prevent him from distributing the films theatrically or on DVD. But Francine Stock says making these films isn't a hobby for Benning, it's a calling. "They are more of a compulsion," she says. "And they stand or fall on their energy and style."

Weinberg thinks the DVD industry should be hiring Benning to create bonus features that fans would genuinely embrace. Fans have already shown their love for Benning's films by sending the filmmaker more than 10,000 appreciative e-mails. In addition, his trilogy got more than 3 million views on YouTube. But just recently, the site requested he remove the films. Benning has now uploaded them to Vimeo. The new site reports that Star Wars Begins has already received hits from such diverse locations as occupied Palestine and Vatican City.

Fan films like Benning's place studios in a quandary. Legally, they feel an obligation to defend their copyright, but from a promotions perspective, they see how fan films generate and maintain interest in their products in ways that no amount of money can buy. Benning's latest fan doc is called Raiding the Lost Ark. It focuses on the first Lucas-produced, Steven Spielberg-directed Indiana Jones film.

"The new Raider documentary is the same blend of admiration, affection and a degree of appraisal," says Stock, "But it is more sophisticated in its use of material." This time around, Benning has created original elements like interviews with actors and technicians who worked on the film, as well as animated reconstructions of scenes that were never shot. Raiding the Lost Ark debuted February 6 on Vimeo and sounds like it will serve up another slice of geek heaven.