Accessibility links
In Honduras, Police Accused Of Corruption, Killings The Central American nation is the most violent country in the world, according to the United Nations. A mix of drug trafficking, political instability and history adds up to a murder rate that is now four times that of Mexico. Contributing to the volatility are the police themselves. 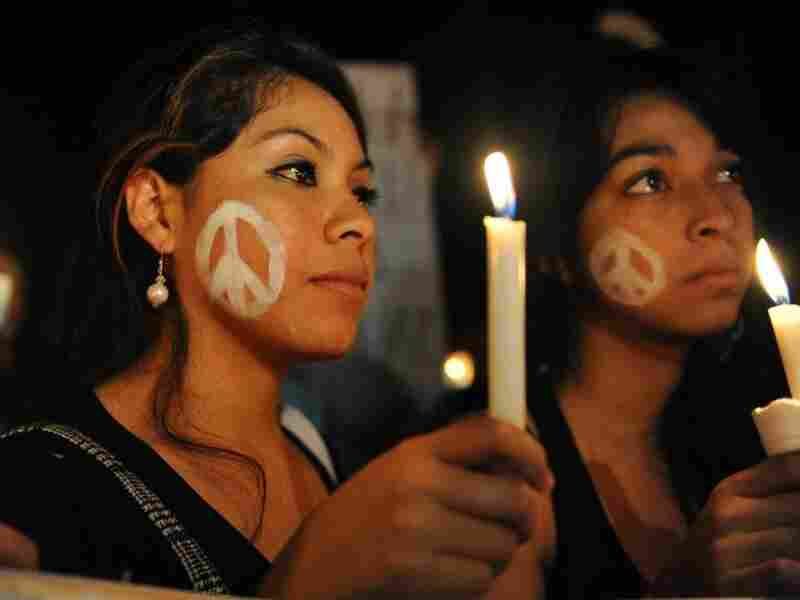 University students take part in a wake against violence held in Tegucigalpa, Honduras, in October. According to the United Nations, Honduras is the most violent country in the world. Orlando Sierra/AFP/Getty Images hide caption 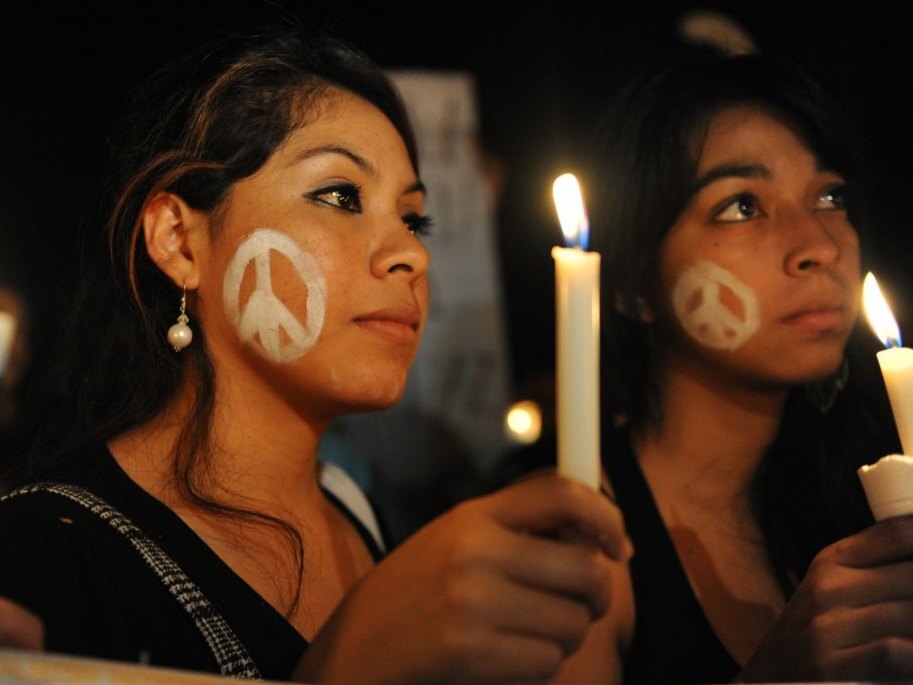 University students take part in a wake against violence held in Tegucigalpa, Honduras, in October. According to the United Nations, Honduras is the most violent country in the world.

This is the first of a two-part series about the roots of violence in Honduras.

Honduras is hot, mountainous and about the size of the state of Louisiana. According to the United Nations, the Central American nation is also the world's most violent country.

A mix of drug trafficking, political instability and history has contributed to a murder rate that is now four times that of Mexico. The Peace Corps has withdrawn its volunteers.

Contributing to the volatility are the police themselves.

'They Don't Respect The Law'

The National Autonomous University is the largest university in Honduras. It's a sprawling campus of concrete buildings and tropical plants, filled with students on break between classes. They sit on benches, drink bottles of soda and chat.

Tucked in between the palm trees, some are gathered around a homemade memorial to two murdered students, Alejandro Vargas — the son of the rector of the university — and his friend Carlos Pineda, who were killed in October. They weren't killed by Honduras' notorious gangs or drug traffickers, but by the police. The memorial is a long roll of white paper taped to a wall, where friends leave photos and write messages in colored marker.

Isaac Trejo is skinny and tall, and he lingers with his hands in his pockets. Despite the heat, he wears black jeans and high-tops. He says violent run-ins with police have become commonplace.

"It's normal, and everybody knows it. They don't respect the law," Trejo says in Spanish. "They can go and attack anyone they want. For them, the rules don't exist."

While police violence is frequent, this case is high-profile. It has galvanized Honduras, largely because of who Vargas' mother is.

Within site of the memorial, his mother, Julieta Castellano, sits in her office. In addition to working as the rector of the university, she's a widely respected expert on violence. She became part of the commission that took on the case of her own son's murder. She says it met strong resistance.

Eight officers were arrested, yet despite striking evidence, the police released four. The investigation found Vargas' blood and hair in patrol cars. Tape on security cameras showed the boys being followed by police shortly before they were killed. Also, area guards testified that they heard gunshots — right after they heard Vargas' friend begging the police for mercy.

"Their response was to take Carlos, still alive, along with the body of my son," Castellanos says, "because reports show he was dead by that point — 13 kilometers to the south of the city, where he was killed, too."

'Corruption Is A Reality'

For 25 years, Maria Luisa Borjas was a high-ranking police official and was eventually put in charge of investigations within the force. She says she was pushed out of her job, her sons thrown in jail and an attempt made on her husband's life when she began to uncover just how serious police corruption had become. 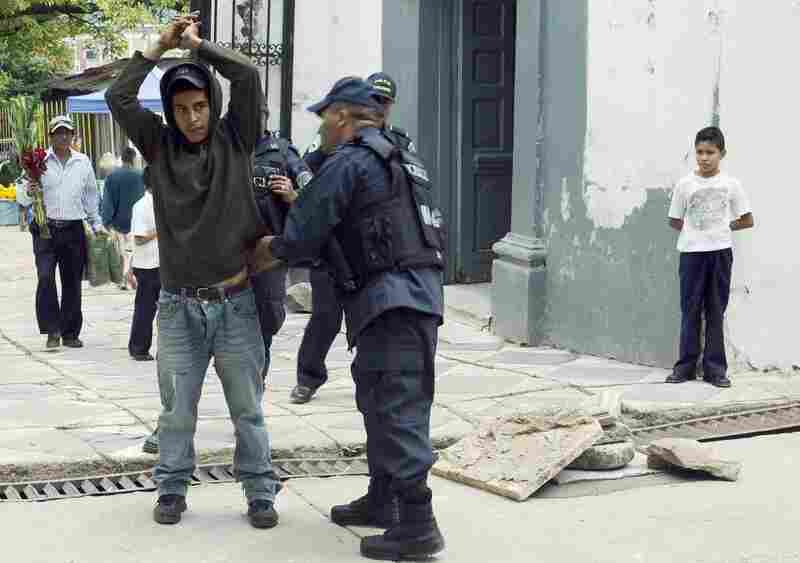 A police officer frisks a man as part of Operation Lightning, an initiative that seeks to stop violence in Honduras, in Tegucigalpa, on Nov. 1. Gustavo Amador/EPA /Landov hide caption 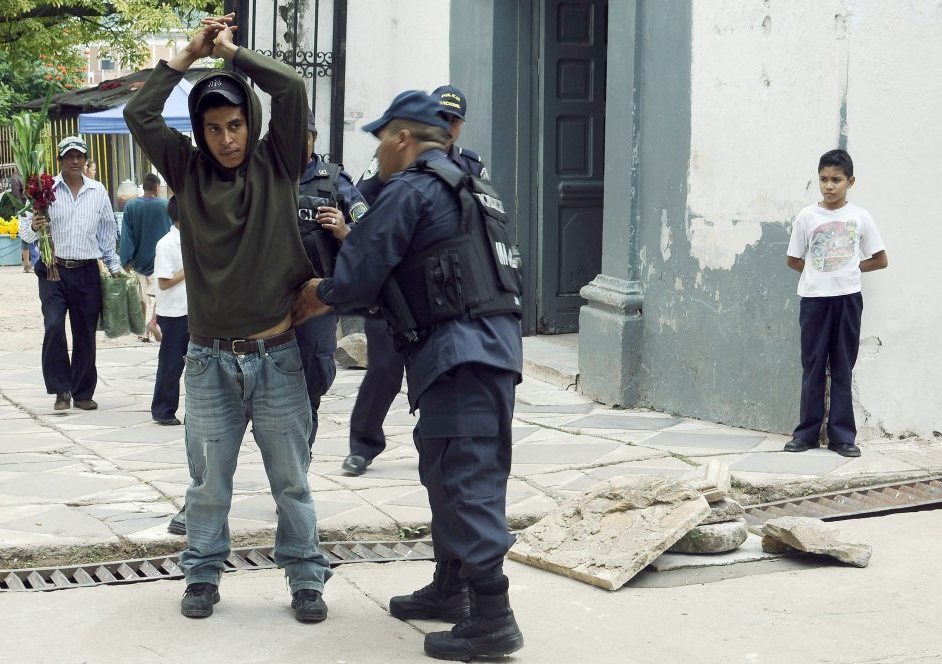 A police officer frisks a man as part of Operation Lightning, an initiative that seeks to stop violence in Honduras, in Tegucigalpa, on Nov. 1.

"Everyone here knows that each day young men turn up dead, with their hands bound, and the famous execution shot to the base of the skull," she says, "and the majority of people that come forward, they say that it was the police that had taken those young men away."

The government says it's doing everything it can. Following the murders, high-level officials were fired, and the military was sent into the streets in a move called Operation Lightning.

"Not all the police are bad," Security Minister Pompeyo Bonilla says, "but unfortunately, we do have to accept that corruption is a reality, because in the last three years Honduras has become a major stop for drug trafficking."

How History Influences The Present

However, according to Berta Oliva, the head of the Honduras human-rights commission, it's about more than just drugs.

She says today's problems go back to the 1980s, when the United States was using Honduras as a base for training and arming groups to fight leftists in the region. Disappearing people became part of the security culture, she says. They were supposed to have been living in democracy, so that's what their "democracy" became, she says: one that kills and tortures its citizens.

Officials who were trained during that era still influence how the police and military are run today, say both Oliva and Borjas. Also, the U.S. still gives aid for law enforcement, with at least $50 million going to Honduras since 2008.

"We've asked the U.S. to stop giving aid to security forces here, and we're going to keep asking them to stop," Oliva says.

The Role Of U.S. Aid

In an interview, U.S. officials declined to comment on tape. They pointed out, though, that times have changed. Officials stressed that today the relationship with Honduran security forces is totally different because all aid is tightly controlled and legal — things like training and materials.

"There's been a lot of aid, but it hasn't been well-coordinated," Bonilla says. "We haven't established clear and precise guidelines for ourselves. We don't have a security policy in this country."

That's why many here, including Trejo, the classmate of the murdered students, believe Honduras is on its way to being a failed state.

At some point, the police will totally lose legitimacy, he says, and there will be even more lawlessness — that's when a society breaks down. Once that happens, he says, the state itself loses legitimacy, which is what is happening here.

Annie Murphy is a fellow in the Investigative Reporting Program at the University of California, Berkeley's Graduate School of Journalism.