Accessibility links
Project Funded Online Hits $1 Million Milestone An engineer set out to raise $75,000 through the crowd-funding website Kickstarter to build and sell iPhone docks. It was an ambitious goal, but he made it — and then some. Supporters gave more than $1 million — the first time a project on Kickstarter had raised that much.

Kickstarter, a website designed to fund creative projects through the support of small online donations, crowned its first millionaire this week: Casey Hopkins, an engineer based in Portland, Ore.

It all started when Hopkins got fed up with the iPhone docks he kept buying in stores.

"They're these little plastic pucks and they don't work if you have a case on your phone," he tells weekends on All Things Considered host Guy Raz. "And they're so lightweight that when you go to grab it, the whole thing comes with it."

So he designed his own — one made of aircraft-grade aluminum that wouldn't move around when you took your iPhone out of it. He called it the Elevation Dock. He shot a video of some prototypes, put it on Kickstarter, and asked for help raising $75,000 to get his project off the ground. 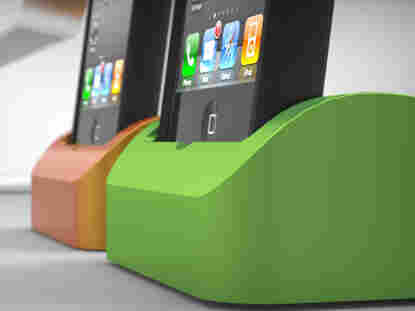 Twenty-four hours later, Hopkins, who made less than $40,000 last year, had racked up $168,000 in pre-orders. Today he has more than $1.4 million in venture capital for his new business. He's gotten orders from retailers all over the world — Taiwan, South Korea, Australia — anywhere iPhones are.

The Elevation Dock will retail for about $90 later this year on his website, Hopkins says, but not until he ships the first round out to supporters who backed his project.

The next few months, he says, will be "nose to the grindstone."