Accessibility links
A Year After Mubarak, Where Does Egypt Stand? Egypt has faced deteriorating security and a surge in crime since the popular uprising that ousted Hosni Mubarak a year ago. The country's military rulers have yet to transfer power to civilian rule, and though many are proud of the revolution, some argue Egypt is not much better off than it was under Mubarak. 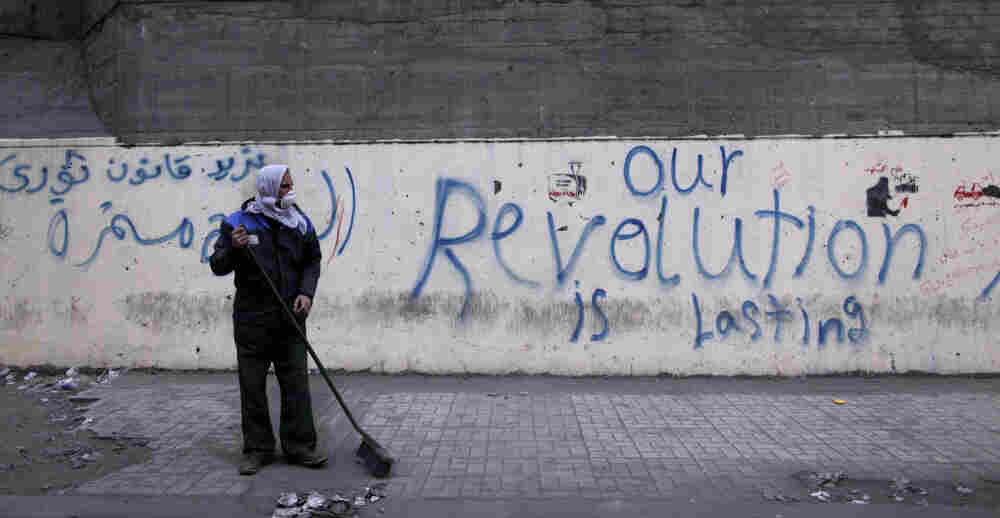 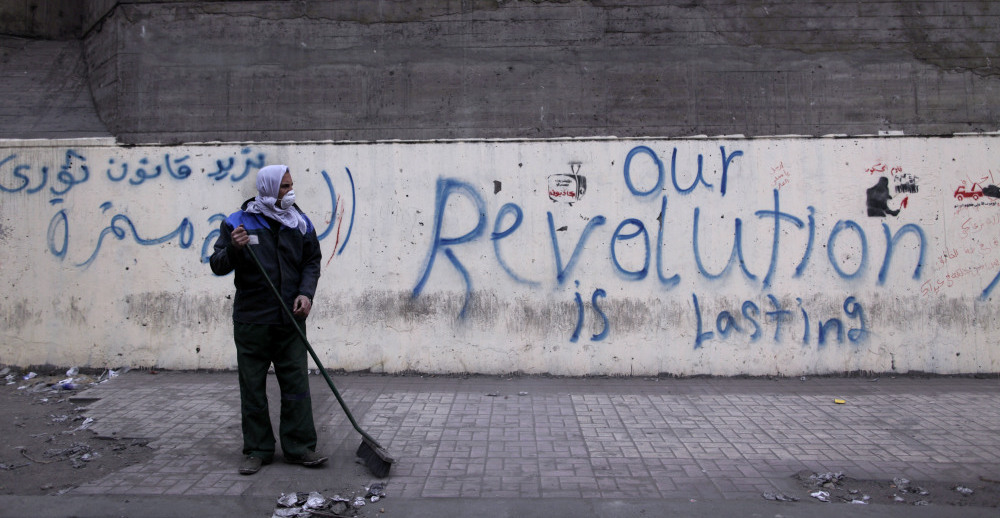 A year ago today, tens of thousands of Egyptians gathered in Cairo's Tahrir Square and celebrated a previously unimaginable achievement: the toppling of Hosni Mubarak.

But one year later, Egypt is far from stable and far from the democratic utopia many activists imagined. Is the nation better off?

Reporting from Cairo, NPR's Soraya Sarhaddi Nelson says small groups of protesters now march around Tahrir Square demanding a quicker transition to democracy. They stand in stark contrast to the jubilant masses who came out to celebrate Mubarak's departure. 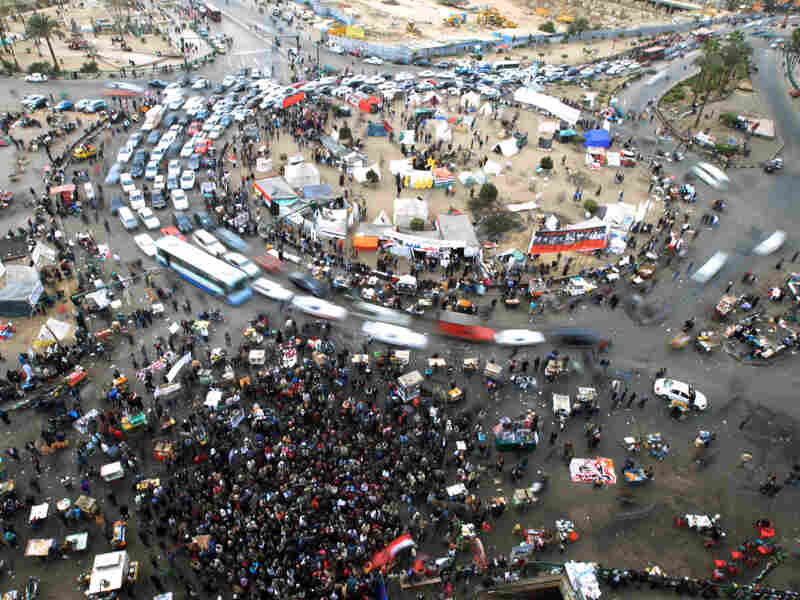 Protesters gather for a demonstration to demand the ouster of the country's military rulers at Cairo's Tahrir Square on Friday. Mahmud Hams /AFP/Getty Images hide caption 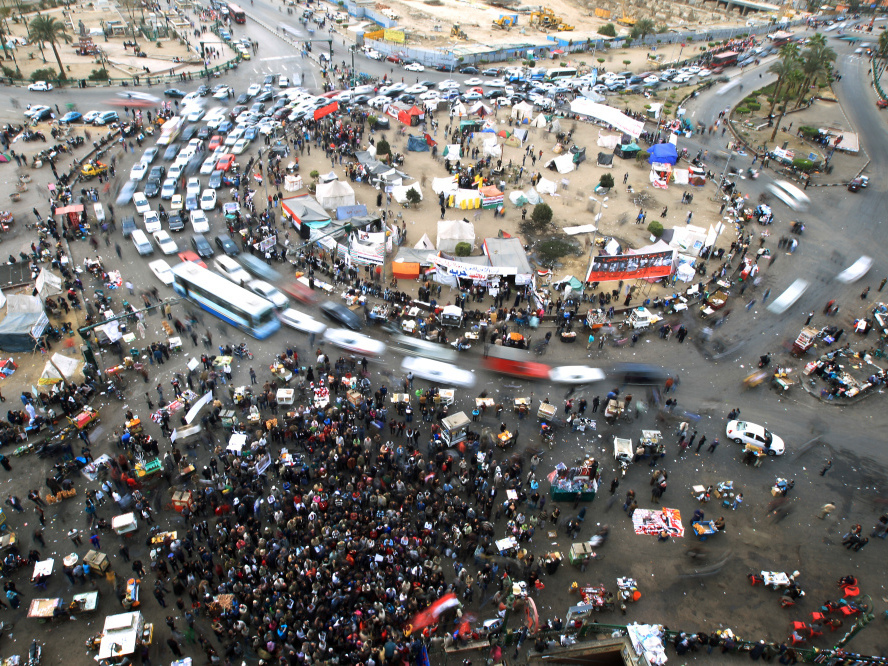 Protesters gather for a demonstration to demand the ouster of the country's military rulers at Cairo's Tahrir Square on Friday.

Tour guide Mohamed Gad el-Karim says Egyptians are worse off. The 22-year-old blames the ruling generals for mismanaging the country and accuses them of caring more about Mubarak, whose trial has dragged on for six months. He says the former president should be in prison, not the luxury hospital outside Cairo where he is being held.

Karim's sentiment is a common one in Egypt. It's what led university professors, students and union leaders to launch a nationwide strike on this anniversary, vowing to bring the country to a standstill unless the generals hand over power to civilian leaders.

That doesn't sit well with Sekina Hassan, a 50-year-old homemaker who watched the protesters parade around Tahrir Square. The strike and continuing protests are destructive, she says, adding that Egyptians will lose their country if it keeps up.

The ruling military council is sending the same message. In a statement read on state-run television, the council called the unrest a conspiracy meant to topple the state and spread chaos.

Meanwhile, Egypt's top military ruler met Saturday with U.S. Gen. Martin Dempsey, the chairman of the Joint Chiefs of Staff. The visit was kept low key as tensions are rising between the two governments. At issue is the recent crackdown on American and other pro-democracy groups and human rights organizations.

So far, 43 people, including 19 Americans, are accused of operating illegally in the country and spurring unrest. They are awaiting trial.

A Better Egypt Ahead

The question of whether Egypt is better off after Mubarak's ouster remains difficult to answer, but for Samer Shehata, an assistant professor of Arab politics at Georgetown University, the answer is unquestionably yes.

Shehata tells weekends on All Things Considered host Guy Raz that under Mubarak, Egypt was turned into a "family business," in which he planned to hand over power to his younger son, Gamal.

"Political and economic corruption were rampant," Shehata says. "Police repression was the norm [and] elections were regularly fraudulent. There was no sense of vision for the future or even [the] possibility that things could improve."

With ongoing protests and violence escalating (dozens of people were recently killed), some would argue that Mubarak did bring a certain level of stability, but Shehata calls that stability a mirage.

"It wasn't a real stability based on popular sovereignty, a government that represented its people, civil and political rights [and] rule of law," he says. "It was repression."

Mubarak has left, but Shehata says there is still "Mubarakism" — many of the military generals he appointed are still running the show.

"This is what happens during transitions," he says. "Mubarak was in power since 1981; of course it's not going to be an easy or smooth or overnight transition. Unfortunately that's the reality of the situation."

Despite the tremendous difficulties Egypt now faces, Shehata says, things are much better and there is the possibility of forward progress.

Raghida Dergham, a columnist and senior diplomatic correspondent for pan-Arab newspaper Al-Hayat, believes the jury is still out on whether Egypt is in a better place.

Dergham tells NPR's Raz that Egyptians she's talked to are uncertain about the future.

"They feel there is instability, there is poverty [and] there is lack of real revolution in terms of the control of the military council," she says. "They feel, in addition to that, that there is an attempt by the Islamists to also have a monopoly on the political process."

The trouble right now, she says, is that the non-Islamist moderates do not know how to play politics with the army or with the Islamists. She says they are being further undercut by the West, including the U.S. and the Obama administration.

"You don't protect your interests by putting a distance with the moderates," she says. "These were the backbone of what America stands for. Don't undercut the moderates [or] it will really come back to haunt us."

Given all of this, she says, what people seem to miss most is the "glue" of the country Mubarak represented, even though they might not miss the dictatorship and his plans to hand over the country to his son.