Accessibility links
BLack, Female And An Inspirational Modern Artist In just the last year, 96-year-old sculptor Elizabeth Catlett has had her work featured in exhibitions from Istanbul to Mexico to New York. She broke through barriers of race and gender, yet remains unknown to all but the artists she inspires. 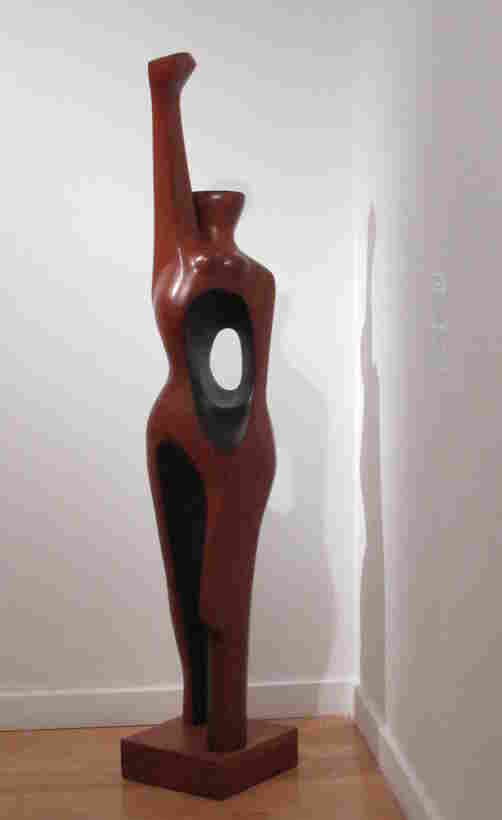 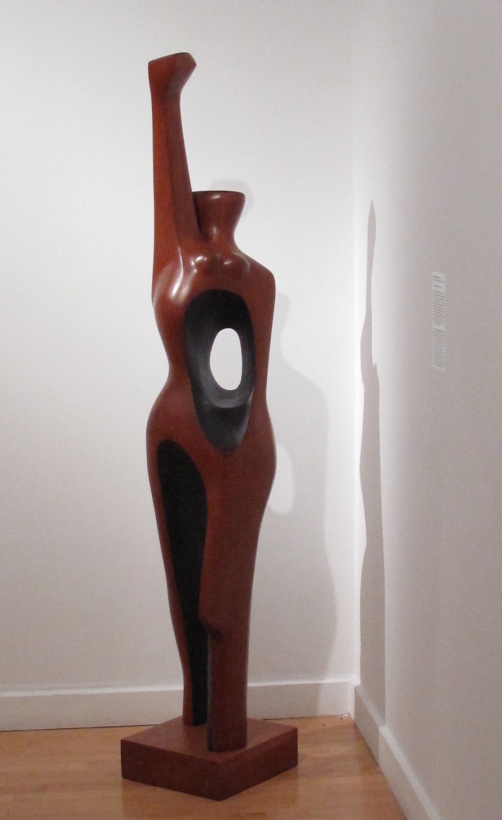 Just in the last year, 96-year-old American artist Elizabeth Catlett has had her work featured in exhibitions from Istanbul to Mexico to New York. Young artists use Catlett's technical expertise and insights into gender, race and class as a jumping-off point for their own work, yet she's still unknown to much of the general public.

An exhibit at the Bronx Museum of the Arts last year juxtaposed Catlett's work with pieces from 21 other artists. Along with her sculptures and prints, it also included her drawings of women with powerful legs and hips, the very act of their standing imbuing them with a force like nature.

Artist Vincent Jackson drank in the figures as he walked through the exhibit. The flowing lines of the figures, he said, expressed the strength and character of the black woman. That's one of the major themes flowing through Catlett's art.

Jackson stopped dead in his tracks by the 1968 Catlett sculpture Homage to My Young Black Sisters. It's one of Catlett's better-known works: a life-sized personification of feminine black power. It's a brown figure of a woman standing defiantly upright, fist raised in the air.

"Doggone it!" he said. "That's the one I like the best." Yet as much as Jackson loved this sculpture, he'd never heard of the artist. Catlett, as she said in a 2003 interview with NPR, is used to this.

"I, as an artist, a black woman artist, have been invisible in the art world for years," she said. 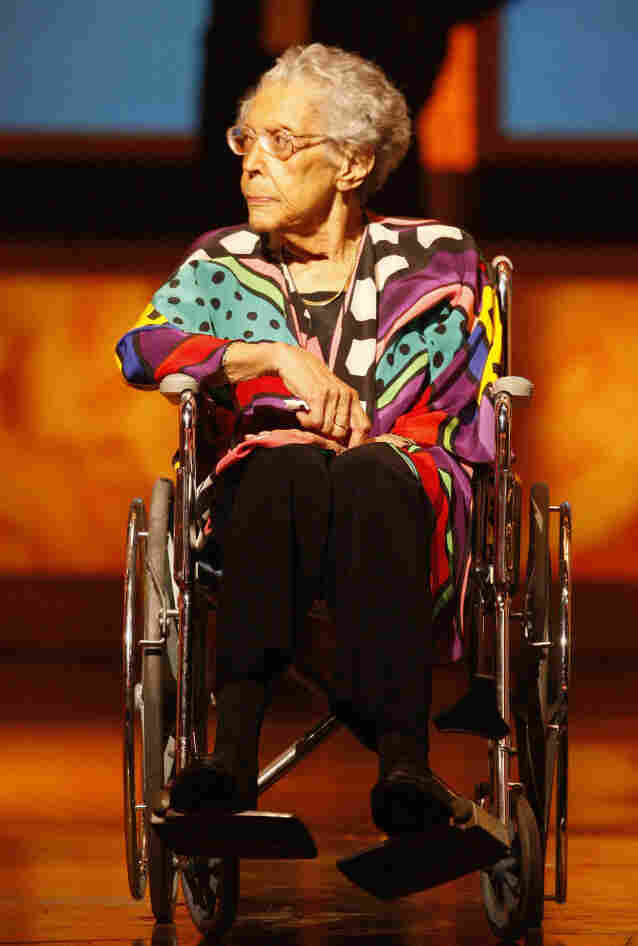 In 2009, Catlett was honored at the NAACP Image Awards in Los Angeles. In the past year, her work has been shown from Istanbul to Mexico to New York. Vince Bucci/Getty Images hide caption 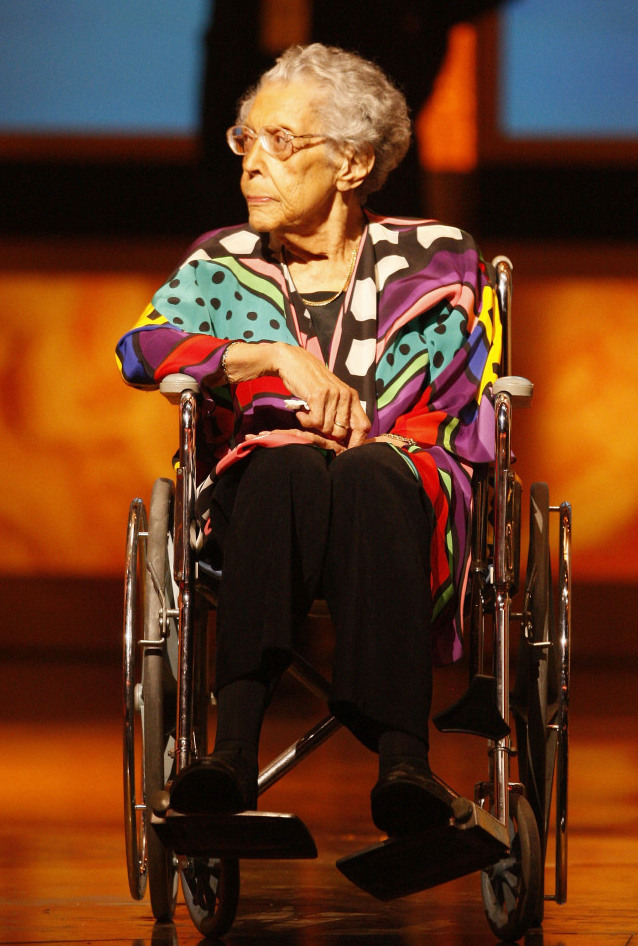 In 2009, Catlett was honored at the NAACP Image Awards in Los Angeles. In the past year, her work has been shown from Istanbul to Mexico to New York.

Portraying What She Knows

When Catlett began creating, curator Isolde Brielmaier says, everything artists of color did was a struggle.

Catlett, the grandchild of slaves, was born in 1915 in Washington, D.C. She won a scholarship to the then-Carnegie Institute of Technology in Pittsburgh, but ended up at Howard University after Carnegie refused to accept a black woman.

By 1940, Catlett had become the first black woman to receive a master's in fine arts at the University of Iowa. Her mentor there, American Gothic painter Grant Wood, encouraged Catlett to portray what she knew best. Wood inspired her to focus on black people — especially women — and their ongoing struggle for equality.

Today, Catlett says the work she's still creating in her home studio in Cuernavaca, Mexico, remains centered on women and those who are poor and disenfranchised.

"I still believe in getting rid of discrimination," she says.

Catlett wound up in Mexico after accepting an invitation to work at a printmaking collective. She married a Mexican artist and eventually became a citizen. The U.S. government denied her a travel visa for nine years, declaring her an undesirable alien because she was a suspected communist.

LaDawn Law flew in from Pasadena, Calif., for the New York exhibition.

"I just see a reflection of all of us in her work, like the Madonna," Law said. "It reminds me of my own mother and how hard she worked to raise her children."

Sanford Biggers contributed an oversized woodcut of an afro pick, with a clenched fist as its handle. In a panel discussion about the themes in the exhibition, Bigger called Catlett a trailblazer.

"I think we have a lot more freedoms because of the work Elizabeth and her colleagues did — her generation did," he said. "Elizabeth's work has influenced me greatly."

Artist Xaviera Simmons had a photograph in the show called One Day and Back Then. It's a nude woman, covered in black paint, with a large afro and bright red lipstick. "That's Xaviera looking at Elizabeth Catlett," Simmons said. 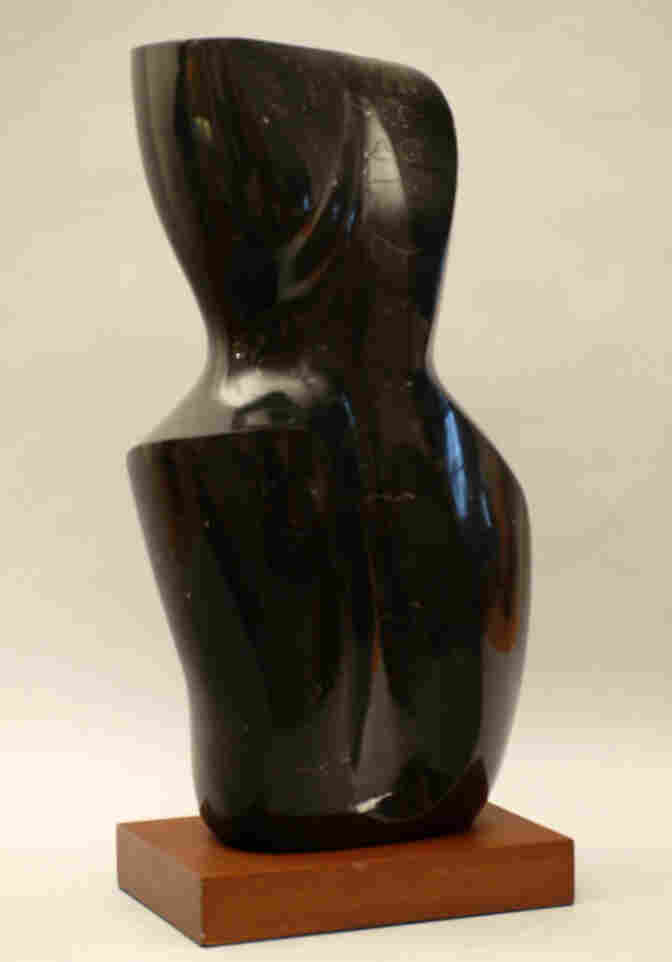 Not only does Simmons follow Catlett's focus on making work about what she knows, she's also influenced by its precision and clarity.

"For me, Elizabeth's craftsmanship is kind of unparalleled. I don't know anyone's work that consistently stays so rich and rigorous over such a long period of time," she says. "I've always looked to her work for that inspiration."

Like Catlett, the artists who contributed to the exhibition want to produce strong images that make people think differently about the historical struggles of people of color and incorporate what's happening today.

Back in Mexico, Catlett works with assistance and offers practical advice to artists trying to learn from her struggle and her work.

Calling her the mother of modernist sculpture is too much, however. "I'm not the matriarch. I don't know who is, but it's not me," she says.

Catlett once said she always wanted her art to service black people, "to reflect us, to relate to us, to stimulate us and to make us aware of our potential." From the level of conversation her work continues to inspire among both artists and admirers, it seems she has more than accomplished that goal.