Accessibility links
'Who Rules In Honduras?' Coup's Legacy Of Violence The country is a major stop for drug traffickers and corruption is rampant. Many experts say things got markedly worse after democratically elected President Manuel Zelaya was ousted by the military in 2009. 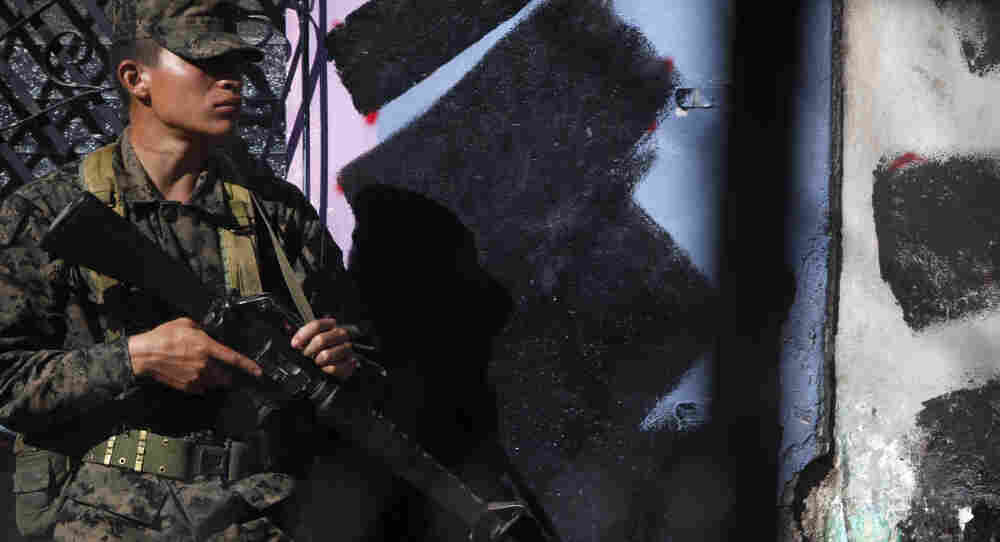 A soldier guards the area where ousted President Manuel Zelaya was kept after returning to Honduras in 2010. Esteban Felix/AP hide caption 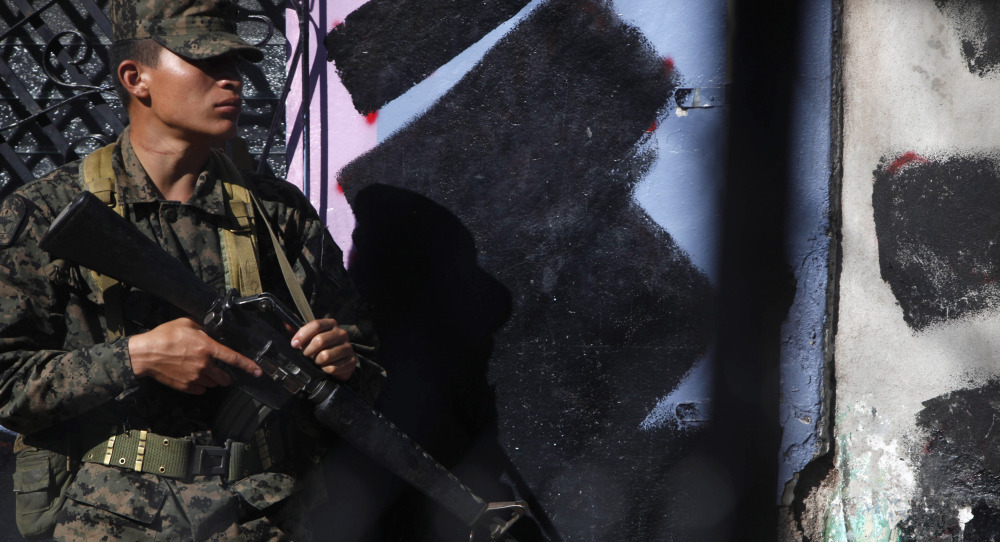 A soldier guards the area where ousted President Manuel Zelaya was kept after returning to Honduras in 2010.

The second of a two-part series about the roots of violence in Honduras.

Honduras is a major stop for drug traffickers; corruption is rampant. Many experts say things got markedly worse after the 2009 coup that ousted democratically elected President Manuel Zelaya. The fallout of that coup continues today.

When it comes to coups and dictators, Latin America has a difficult past. Today the region is largely democratic. Dictators and coups are supposed to be a thing of the past.

Honduras' last dictatorship ended in 1982. The June 2009 coup that ousted Zelaya was a shock to the region and a surprise to world leaders, including Zelaya himself.

"The shooting started around 5:20 a.m. I went downstairs, and there were about 250 masked soldiers around my house," he says from his home in Honduras' capital, Tegucigalpa. "All you could see were their eyes. I said, 'My God, what is this?' "

The military whisked Zelaya out of the country on a tiny plane and left him in Costa Rica.

"They took off, and there I was. The democratically elected president of Honduras, standing in my pajamas in the middle of a runway in Costa Rica," Zelaya says. "I said to myself, 'So this is that great new future everyone is talking about for Latin America?' "

After two years spent in forced exile, he returned home last year as part of negotiations for Honduras' re-entry into the Organization of American States, which it had been kicked out of after the coup.

The military coup that ousted Zelaya was ordered by members of Honduras' supreme court and carried out by the military. Zelaya had been pushing for a poll to gauge public interest in rewriting the constitution, and the court ruled it illegal.

After ousting Zelaya, the coup government sent the army and police into the streets. They began arresting, beating and even killing anyone who protested against the new government. According to an official truth commission, they were responsible for at least 20 deaths in the immediate aftermath.

Edgardo Valeriano, a medical doctor and researcher, had never been political. But after the coup, he joined protests demanding democracy and Zelaya's return. Like many protesters, he was beaten. His skull was split open by batons and police lashed him with chains. Valeriano says he feels like Honduras went back to the 1980s.

"I remember those years well. I was a student in medical school back then, and I remember how some students would show up tortured by the police," he says. "Stories on the news about other young people that had been brutally tortured, whose bodies would turn up at different spots in the capital. There was an atmosphere of strong repression."

The election of Rafael Callejas, who was Honduras' president between 1990 and 1994, marked the first time in 60 years that power was transferred peacefully between two major parties. Callejas says he believes Zelaya is too brash, but says illegally ousting him has had huge repercussions.

"We're in a crisis. We went back 20 years. We lost again the issue of democracy," Callejas says. "Who rules in Honduras now? Really? Who rules? The people? The system? Or strength? I mean, that's the question that has to be solved." 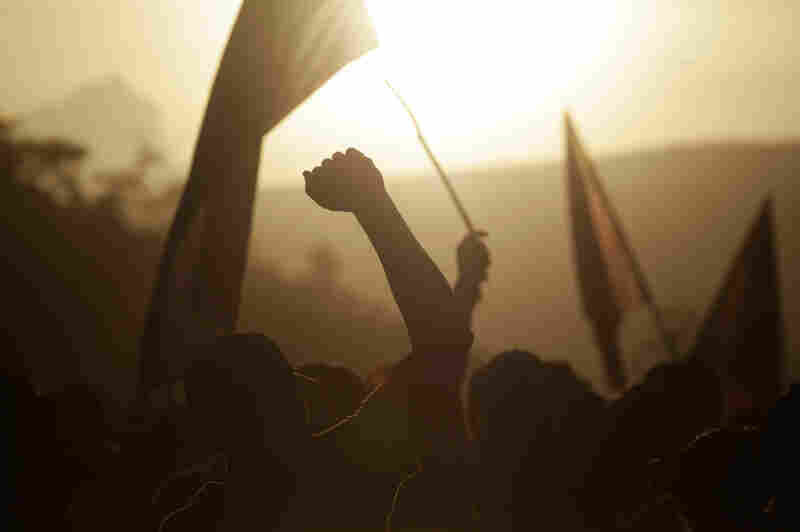 Zelaya's supporters rallied after the coup that ousted him in June 2009. Esteban Felix/AP hide caption 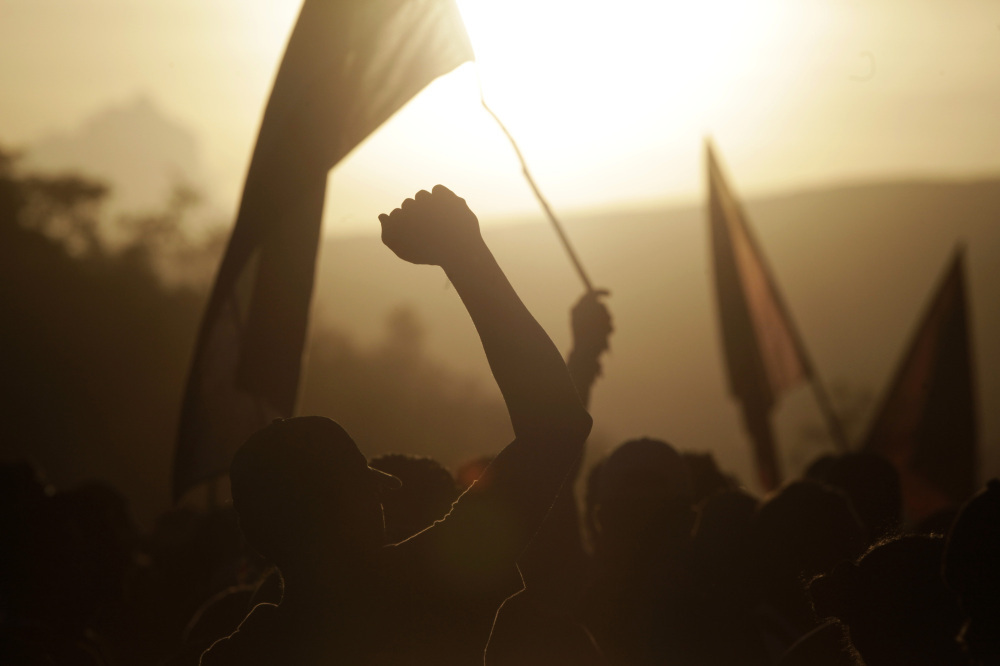 Zelaya's supporters rallied after the coup that ousted him in June 2009.

U.S. Reaction To The Coup

For more than a century, the U.S. government has had significant influence in Honduras, from the era of U.S.-owned banana plantations, to military and economic ties that endure today. Because of that history, the U.S. response to the 2009 coup carried a lot of weight.

"After the coup, a lot of the line taken here by pro-coup people was that the coup was the restoration of democracy, and they sold that in Washington," says Fulton Armstrong, a former CIA analyst who worked as a senior staffer on the Senate Foreign Relations Committee during the coup. He watched the U.S. response unfold.

"But when you look at what was actually happening in Honduras, [Zelaya] really was a continuation of a halting but definitely forward-moving consolidation of democracy," he says.

Despite the call for Zelaya's return by nearly every other country in the hemisphere, Washington chose to back new elections, which were condemned internationally because of widespread violence and repression. Polls were held, and five months after Zelaya's ouster, Porfirio Lobo was elected president. Eventually, the crisis was declared over, but violence has only increased.

Cresencio Arcos, who was ambassador to Honduras in the early '90s, has been involved in the country for decades. He says the Obama administration failed to take a firm position regarding the coup.

"I think this stems from the following: that Latin America is an orphan in our foreign policy. I don't think we have a defined policy," Arcos says. "We had one during the Cold War: They were our allies. After the Cold War ended, we never redefined; we never retooled."

Defining The State Of Affairs

Many here say the outcome of the coup is what pushed Honduras to where it is today: the world's most violent nation, according to the U.N.

Valeriano says it was shocking that in the 21st century, they could pull off a coup. If the president can be taken out of a country and have his rights taken away, the doctor says, without a trial or anything, then what becomes of your average citizen?

Annie Murphy is a fellow in the Investigative Reporting Program at the University of California, Berkeley's Graduate School of Journalism.