Accessibility links
Movie Interview — Brad Pitt: Making 'Moneyball' And Being Billy Beane Brad Pitt has had quite a year: Two of his films — Moneyball and The Tree of Life — are up for the Best Picture Oscar, and the baseball film earned him a Best Actor nod. Pitt says the Oakland A's manager's idiosyncrasies made the role interesting. 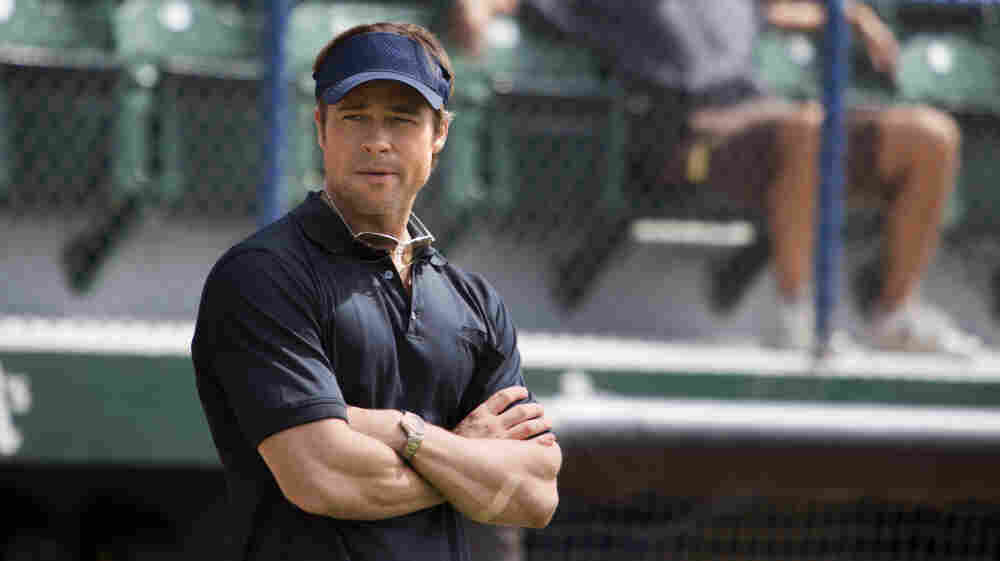 In the Oscar-nominated film Moneyball, Brad Pitt plays Billy Beane, a baseball manager obsessed with turning his cash-strapped team into a contender. Pitt says that drive is what attracted him to the role that has earned him a best-actor nod.

"He was a guy who had been devalued by the sport as a player and now is working as a GM for a small-market team," Pitt says. After an unsuccessful big-league career, Beane struggles to find a level playing field in a sport where money tilts the table. "There is such a gulf in what these teams have to spend on talent [that] they can never play equally — they can never have a true competition."

Beane is fully consumed by his job, divorced and trying to stay in touch with his daughter — not exactly a well-rounded character. But Pitt says that's what makes him interesting.

"I like him for his idiosyncrasies — that he can't watch the games without getting too emotional, that he often has food down his shirt, that he tends to break a few chairs now and then," Pitt says. "These things make him human."

Those idiosyncrasies are evident in a scene between Beane and the owner of the Oakland A's. He's asking the owner for more money to sign better players, and his frustration and even desperation are clear. Yet he smiles.

"What I like about that scene is he knows he's losing the argument," Pitt says. "He's getting more and more frustrated and therefore getting more and more pushy and trying every Hail Mary he can to get in there and reason — to the point where he almost insults his boss. And he's got no other cards to play, and maybe that's the [reason for the] smirk — it's a no-win situation."

Moneyball is based on a true story, but Pitt says such films walk a line between approximating reality as it happened and letting the world of the film become its own reality.

"They're in this dynamic flux every day," Pitt says, "and the day you shoot that day informs the day after, what you're going to shoot next."

For example, in a scene between Beane and his scouts when they discuss picks for the upcoming draft, Pitt says, you can see how the process of research for the film changed the outcome.

"We had a work session where about 30 scouts came in and out," Pitt says. "We're all riffing, and after it, [director] Bennett Miller said, 'Look at these faces: This is what we have to do — we gotta get these guys in the scene.' "

In the film, Beane sits at a table with actual scouts and veterans of baseball, all middle-aged or well beyond. Beane, in his mid-40s, is probably the youngest at the table. When he explains his picks for the upcoming draft, it's Beane's instinct against the experience in the room — and the scouts react with realistic skepticism.

Pitt says that though Moneyball had the talents of screenwriters Steven Zaillian and Aaron Sorkin going for it, they weren't baseball insiders.

"The [scouts] could lend an authenticity that's even beyond what we had on the page," Pitt says.

Pitt is listed as a producer on the film, but despite the clout that comes with that credit — and with being an above-the-title star — he says he always works for the director.

"I just take credit for being smart enough to find a guy as smart as Benett to tell the story," Pitt says.

Miller joined the production midstream as its third director, after several stops and starts. Before Miller, David Frankel and Steven Soderbergh had both been set to direct.

"We came up to the last minute," Pitt says. "We were supposed to be filming days before, [but] the studio didn't like the price. They had no problem with the story, but at that price, they could not justify it. And we could not bring it down to a price that both sides would be happy with, so we had to start over."

Asked if the experience of making the film had any similarity to that of Billy Beane putting together a championship baseball team, Pitt chuckles.

"A little bit, yes," he says. "I dare make those comparisons, but we often said 'the making of' would be as interesting if not more interesting than the film."