Accessibility links
U.S. Watches Closely As Oil Drilling Begins Off Cuba A Spanish company has begun drilling for oil in the Caribbean north of Cuba, just 80 miles from the Florida coast. Researchers and response crews in Florida are already making contingency plans for a possible spill. 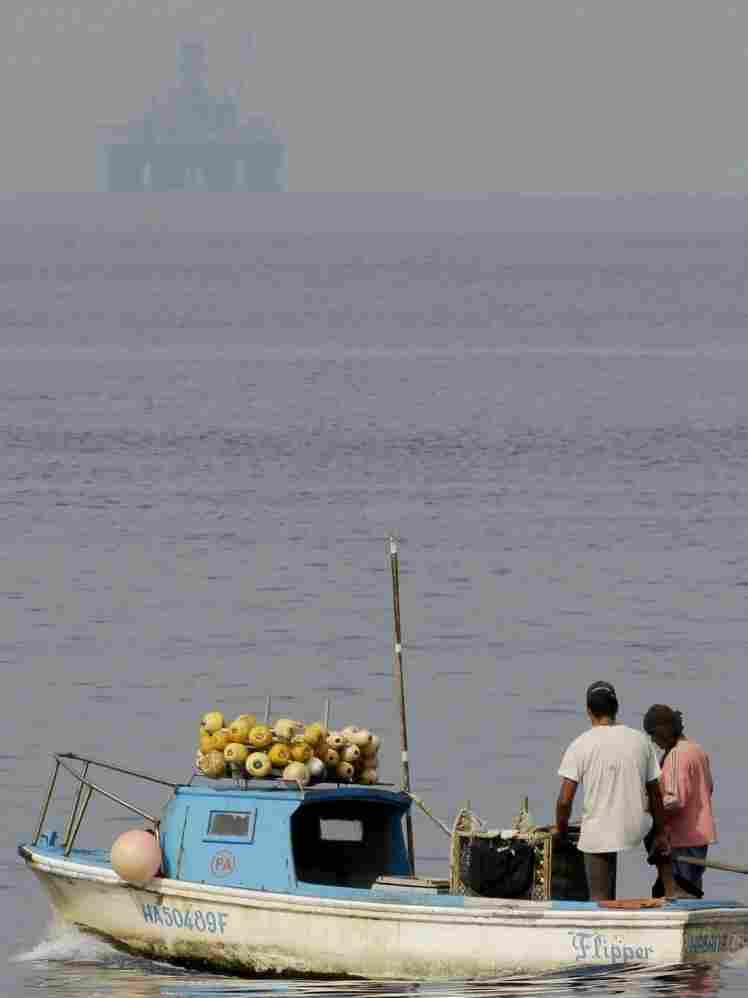 Fishermen work near the Scarabeo-9 oil rig off the coast of Cuba. U.S. officials are concerned about the potential impact in the case of a spill. Javier Galeano/AP hide caption 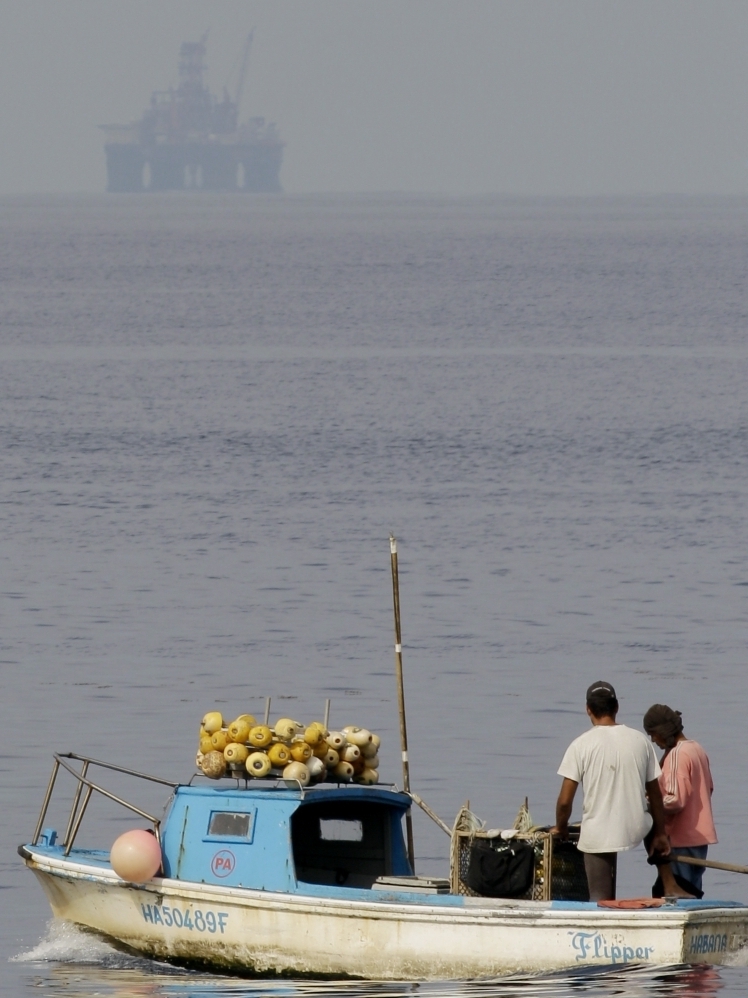 Fishermen work near the Scarabeo-9 oil rig off the coast of Cuba. U.S. officials are concerned about the potential impact in the case of a spill.

There are big plans for oil exploration in the Caribbean, not far off the coast of Florida. A Spanish company recently began drilling in Cuban waters — just 55 miles from Key West.

The well is the first of several exploratory wells planned in Cuba and the Bahamas. The drilling has officials and researchers in Florida scrambling to make plans for how they'll respond in case of a spill.

The U.S. currently doesn't allow any drilling for oil off its Atlantic coast or in the eastern Gulf of Mexico. One reason is what's at stake. Florida's tourism-based economy depends on its beaches, fishing and clear Caribbean water.

The U.S. ban on drilling off of Florida, however, doesn't affect America's Caribbean neighbors. The exploratory well being drilled off of Cuba has many here concerned, including people like Richard Dodge. Dodge is the dean of Nova Southeastern University's Oceanographic Center in Dania Beach, near Fort Lauderdale, and what he's really concerned about is coral.

At the school, Dodge and his graduate students raise staghorn coral in outdoor saltwater tanks. Live coral grow in the crystal-clear water, some just finger length.

"These are relatively new ones that we're starting out," Dodge says. "But over here, these are ones we'll be transplanting to the wild."

In another tank, large branches of coral will soon be used to help restore damaged reefs.

Florida is home to more than three-quarters of the nation's coral reefs — and they haven't been doing so well. Development and warming oceans have already weakened many.

On a map, Dodge points out the location of what he believes is an even bigger potential threat — the spot where Cuba has approved offshore oil drilling. "The site that will be drilled," he says, "is only about 50 miles from Key West."

The rig drilling off Cuba's northern coast is operating in water that is more than a mile deep. But it's not the depth that concerns Dodge. In the case of a blowout, it's the operation's proximity to the Gulf Stream.

"We're worried that it could get into that stream fast and therefore, within days, impact our coastal ecosystem and coastline," Dodge says. A spill could potentially affect hundreds of miles of beaches, mangroves and estuaries from the Keys to Palm Beach. 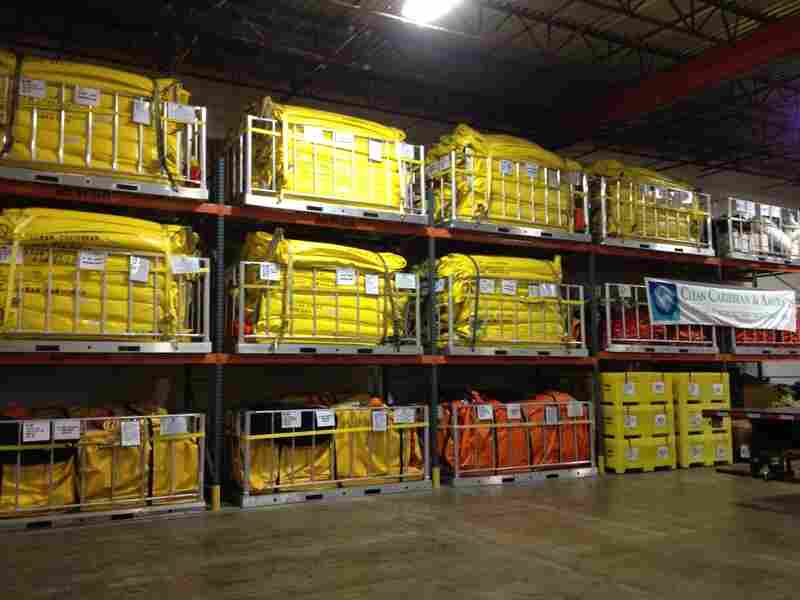 At the organization Clean Caribbean and Americas, 30,000 feet of floating boom is ready for immediate shipping in the case of an oil spill. Greg Allen hide caption 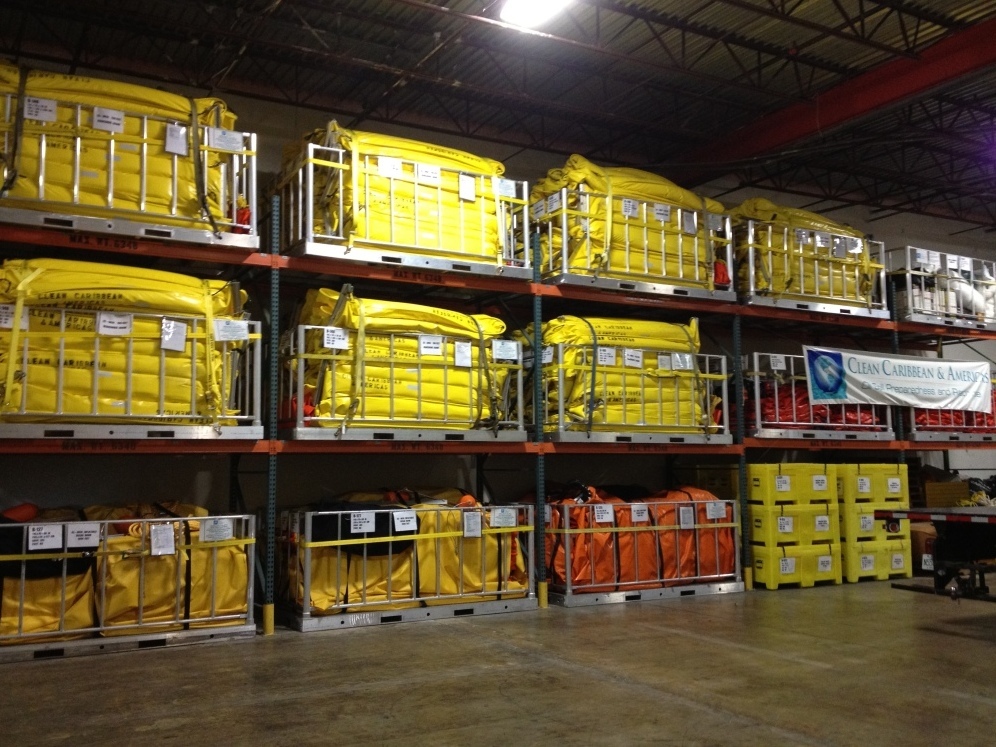 At the organization Clean Caribbean and Americas, 30,000 feet of floating boom is ready for immediate shipping in the case of an oil spill.

Dodge and other marine scientists in Florida are asking the federal government to fund research that would help identify the resources most at risk, and develop guidelines to protect them.

Complicating matters is the fact that this new well is being drilled in the waters of a country that's under a strict U.S. embargo. Unless they apply for and receive special permission from the government, U.S. companies are banned from doing any work on the well — even if there's a spill.

Jorge Pinon, a former oil company executive and now a research fellow at the University of Texas, says if there's a blowout, the U.S. president is sure to immediately lift the embargo for companies that respond.

Pinon also says the Spanish company doing the drilling, Repsol, has a lot of experience with deep-water drilling in the Gulf. And, he says, the company has upgraded its procedures to incorporate lessons learned in the 2010 Deepwater Horizon spill.

But Pinon sees another problem. Because of the 50-year-old embargo, the U.S. and Cuban governments have almost no contact. "There is no agreement of cooperation of who's going to do what during an incident like this," he says.

"That's not going to be the case here," Pinon says. "And here particularly, it's between two countries that have not spoken to each other in 50 years."

But there are people working on developing contingency plans.

At the Clean Caribbean and Americas cooperative in Fort Lauderdale, a warehouse is full of oil skimmers, floating boom and tanks of chemical dispersant. The organization is funded by oil companies with one mission: to respond to big oil spills. Company personnel are now working with Cuban officials on the international response to a spill in Cuban waters.

Clean Caribbean and Americas technical adviser Mike Gass says that in a meeting recently in Havana, Cuban authorities agreed to cooperate on customs, immigration and air space control. And Cuba has already approved some cleanup procedures, such as burning large patches of oil.

Gass says Cuba has also agreed, if there's a spill, to use chemical dispersant. "They have their own agriculture spray aircraft that would be their first line of defense to apply these things," he says.

There is a chance that after drilling, energy companies may not find enough oil off of Cuba to merit further exploration. Pinon, the former oil company executive, says the rig off of Cuba is scheduled to drill three wells — at a cost of $100 million each.

The fact that international oil companies are investing $300 million shows the industry's confidence that its next big oil field may be just 50 miles off the coast of Florida.